Game Freak, the video game studio that most of the world associates with the insanely popular Pokémon franchise, is ready to unleash Little Town Hero on the Nintendo Switch. You see, every now and then some of the members at Game Freak decide to work on a title that has nothing to do with the “Gotta Catch ‘Em All” gang, and said efforts have provided us with some very fun and interesting games that are completely different from what they’ve done for the many Pokémon entries they’ve worked on. 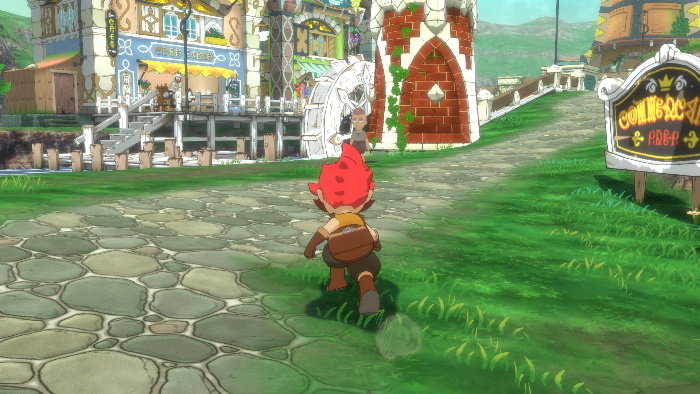 These games have included outstanding gems such as Drill Dozer on the Game Boy Advance – rumble cartridge and all -, rhythm-action platformer HarmoKnight and the highly addictive Pocket Card Jockey on the Nintendo 3DS, the great looking, fun, and charming Tembo The Badass Elephant on PlayStation 4 – which we reviewed and loved -, Giga Wrecker Alt on PlayStation 4 and Nintendo Switch – another one we also got a chance to review -, and now Little Town Hero is joining the list of games that Game Freak has created. 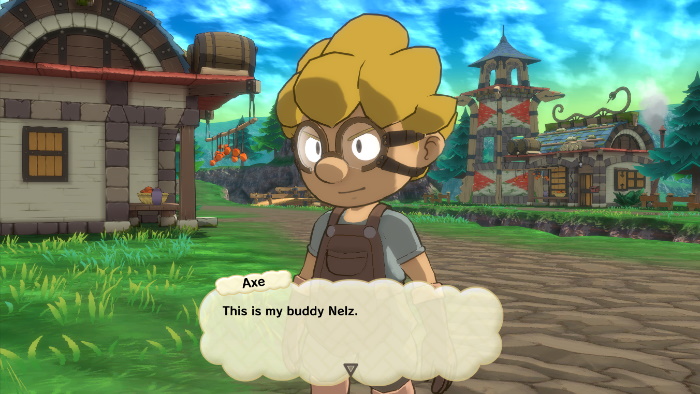 Little Town Hero begins as Nelz and the main protagonist – who you’re asked to name at the start of the game unless you want to leave the not change the default name of Axe – are trying to sneak into the castle. They create a diversion by having Nelz light up a spark, which he then hides in his pants, telling the guards that the town is on fire. The soldiers, seeing a kid with his pants “on fire,” end up running behind him, which clears the path for Axe to run straight into the now unguarded castle.

Why is Axe so adamant about entering the castle? Because it turns out that the castle is the only way anyone can exit the cozy little town that Axe calls home! After this little stunt, Ember, Axe’s mom, is certainly not thrilled when she learns about what Axe has done, and he lets him know that he should stop trying to go into the castle since the people inside it are very busy. Axe is left off with a warning, but Ember does tell him he should tell Nelz he’s sorry for getting him into trouble. 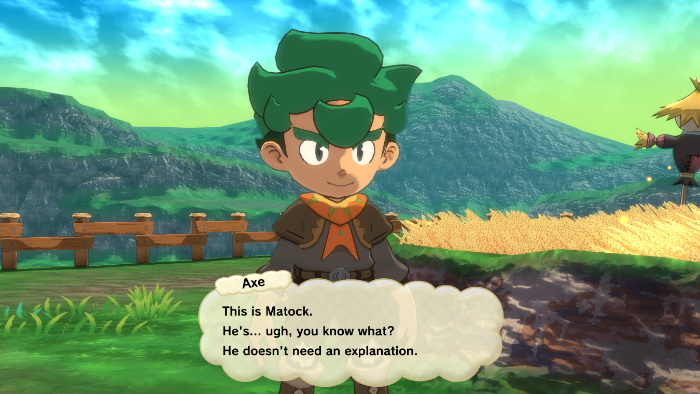 After this introductory sequence, the game proper will begin. Nelz asks that you hurry up so that you can go train with Angard, an experienced soldier from the castle. Unfortunately, when you get there, you’ll see that Matock has already beaten you to the punch – think of him as the classic rival who will always try to be one step ahead of you. Axe wants to train hard so that he can become a soldier at the castle. What follows is the game’s short and to the point tutorial.

The gameplay mechanics for Little Town Hero are based on the use of Izzits, ideas that Axe can use during battle. Ideas are nothing more than a mere possibility, and before an idea can be put to good use, it needs to materialize. Once you’ve put an idea into action by spending some of your Power, you will add some substance to it, and it will change from an Izzit to a Dazzit. You’re limited in how much Power you have available for each turn, so you need to decide how you’ll be spending it. 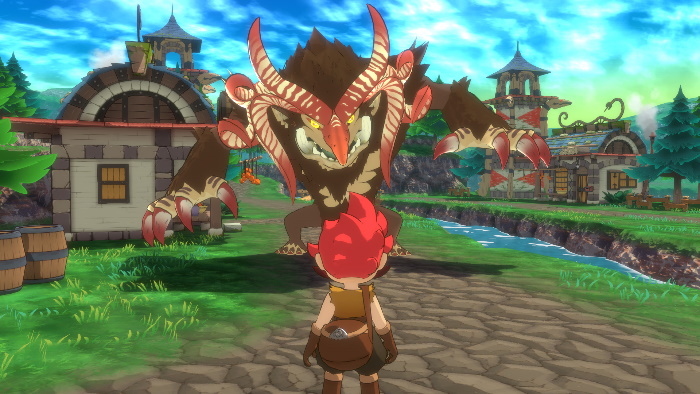 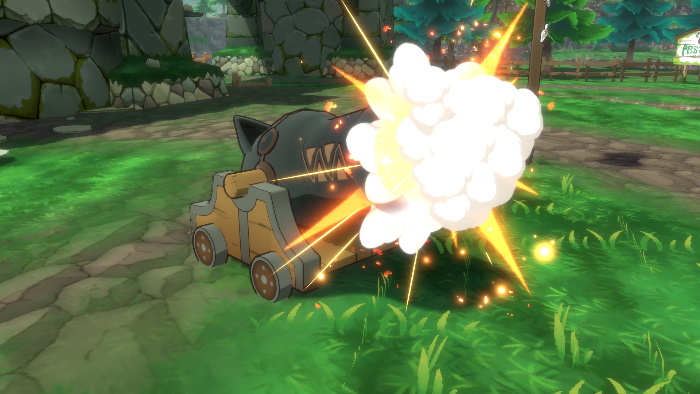 As a fight progresses, Axe will start to come up with new Izzits that can be converted to Dazzits by using some of the Power he has stored. Weakening your opponent’s Dazzit, even if ends up breaking one of your Dazzit, will be crucial in battle, since for the next round you can try to turn the tables by turning a more powerful idea into a reality, even if it will sometimes require that you to spend more Power than before, potentially leaving you open to defeat if you’re not careful. 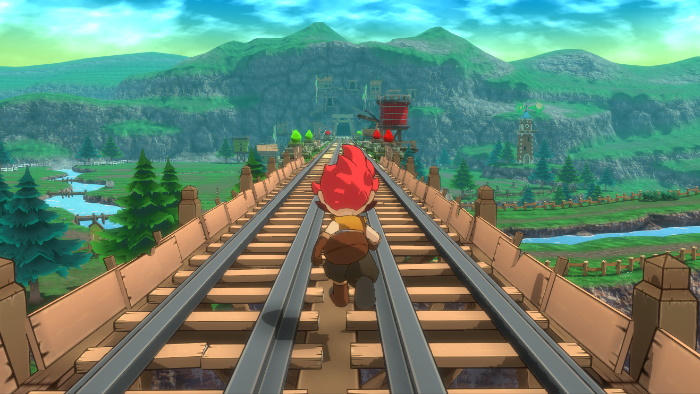 If you break all of your opponent’s Dazzits, you’ll perform an All Break. What this does is give you the opportunity to attack right away in a Chance Turn… as long as you still have an idea left to attack with. Since your opponent won’t have any Dazzit to send into battle to collide with yours, the next Dazzit that you use will deal damage directly to your opponent’s body. Its overall health will be represented by the colored hearts below it, and if you break all of the hearts, then you will win the battle! 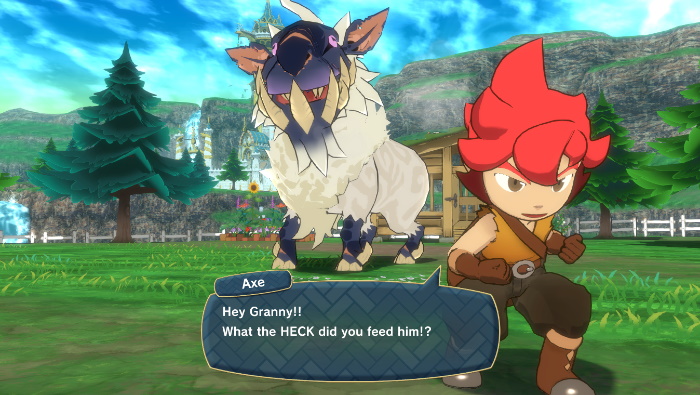 Something else to consider is that ideas come in three colors: red, yellow, and blue. Red Dazzits are the regular ideas you’ll be using the most to attack and defend against your opponent, but they can only be used once. Yellow Dazzits will act as a shield of sorts and can be used multiple times if they’re not broken. What’s the catch? You won’t be able deal damage with a Yellow Dazzit during a Chance Turn. Blue Dazzits are a bit different since they can be used at any time without having to clash with another Dazzit. An example of this is the Pelt Blue Dazzit, which, when activated, will deal one damage to all of the Dazzits of your opponent.

Soon after the first set of training battles, Axe will find a Red Stone in the coalmines where he works. The stone will provide him with a ton of power, and this can be carried with you into battle as you power up the Red Stone during a fight. With every turn that passes, the bar for the Red Stone will start to fill up, and once the bar is full, Axe will be able to gain an extra Power to use in subsequent turns, which will allow you to activate more ideas to aid you during that particular fight. 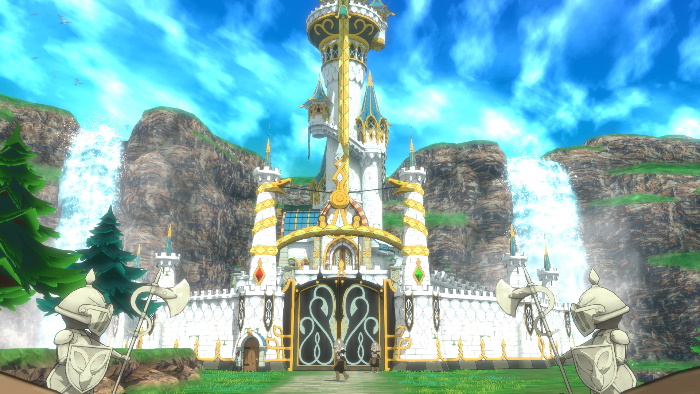 An interesting twist for proper battles against the monsters you’ll have to defeat during your time with Little Town Hero is that you’ll end up moving to different locations in the area at random, as it’s all decided by a roulette. There are some Dazzit that can help you remove the random movement so that you can land on a close-by spot that can favor you in battle. Locations can play an important role, since they might directly affect the outcome of a fight. If you land on a spot on the map where a friend is located, you’ll get that person’s support for the big fight. You might, for example, land in a slot with Nelz, who will allow a random Izzit to become a Dazzit for no energy cost. 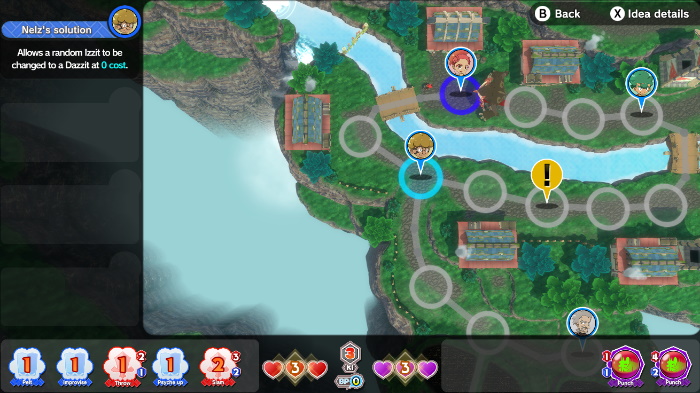 If you enter a Chance Turn without any active red Dizzits, then you’ll get a Break Point (BP) for performing an all break without having a way to attack your opponent. BP can be used to swap an idea on your current hand with an idea from Axe’s Headspace. BP can also be used to revive ideas from Axe’s Headspace so that they can once again be brought back onto the playing field to be able to turn those ideas back into Drizzits. Speaking of the Headspace, if Axe receives any damage to his hearts, old ideas will be revived into the Headspace, which is the game’s way of acknowledging receiving damage is bad for your odds of winning a battle, so it will try to give you a chance to get back on the path towards victory.

Along with everything else, something you’ll have to consider is the Guts parameter during battle. This is placed over the hearts of the monster as well as of the hearts of Axe, and it basically acts as extra armor to protect the hearts from being damaged directly right from the start. You’ll first need to hit the monster so that Guts hits zero before you can try to break all of its Dazzit to then damage its hearts. The same applies to you, so if you make good use of the ideas that can boost your Guts, you can keep the monsters from hitting you too hard. 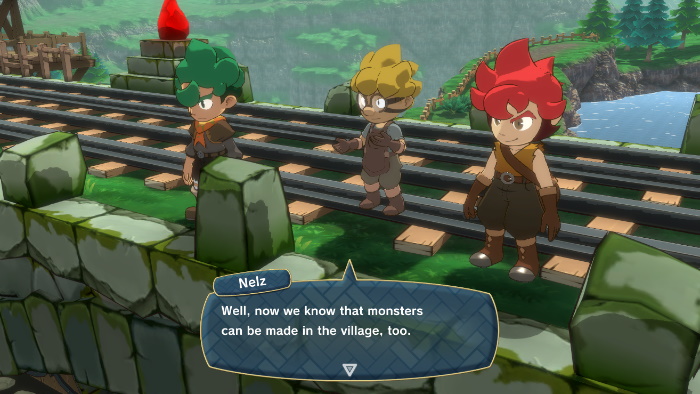 As you play the game, you will start to fill up a scrapbook that will include information on all of the villagers you will meet, as well as on all the monsters that you’ve battled. You can check on each of the profiles to get a bit of extra info on each of the characters or monsters. You can also press the X button to remove the interface and see the 3D model of a character or monster, zooming in and out by pressing up on the right analog, rotating the model, and even making each one perform different actions by pressing the A button.

The game looks great on the Nintendo Switch, both in Docked as well as in Portable or Tabletop mode. Sure, it’s a game with a small location to explore – the little town from the game’s title, as well as some other small spots-, but there’s some nice attention to detail in play. The wind will gently blow, moving the plants around you. All characters stand out and are just as colorful – both physically and in their personalities – as the town itself. Something else I need want highlight is that the soundtrack for Little Town Hero was composed by Toby Fox, indie dev of Undertale fame. 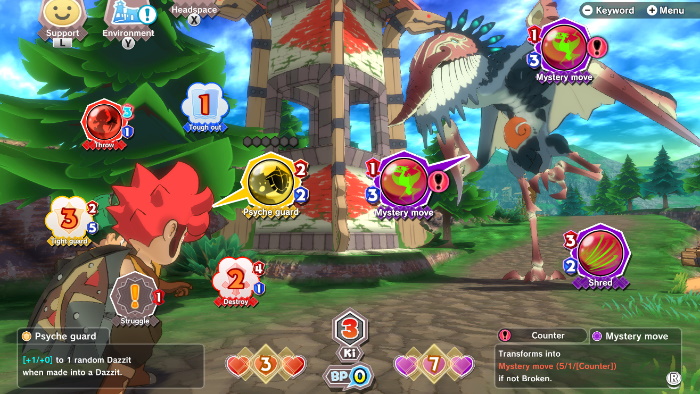 Little Town Hero is a gem of an RPG on Nintendo Switch. It’s completely different from any other RPG you’ve played before, doing away with the XP grinding and having to battle smaller and weaker enemies over and over again to level up so that you can take on bigger and stronger enemies down the road. Little Town Hero is going to be all boss battles all the time, and this, along with its fun battle system, make it stand out on Nintendo Switch. The game is available for $24.99, and you’re going to spend a good 15-20 hours playing it from start to finish.

Disclaimer
This Little Town Hero review is based on a Nintendo Switch copy provided by Game Freaks.