Family Tree from eastasiasoft and Infinite State Games is a colorful and fun arcade-style pinball platformer on Nintendo Switch. Learn more about this fun release in our Family Tree review!


In Family Tree, you’ll play as either Mr. or Mrs. Fruit as you try and rescue your Fruit Kids from the Evil Skull Pedro – he sucked them into a portal and vanished! Evil Skull Pedro has turned the kids into fruit proper, scattering all of them on all the trees in the forest. You’ll be doing some pinball platforming as you bounce around each area, defeating the enemies you jump onto along the way. Can you complete the over 150 regular and bonus stages that this $7.99 budget release has to offer? 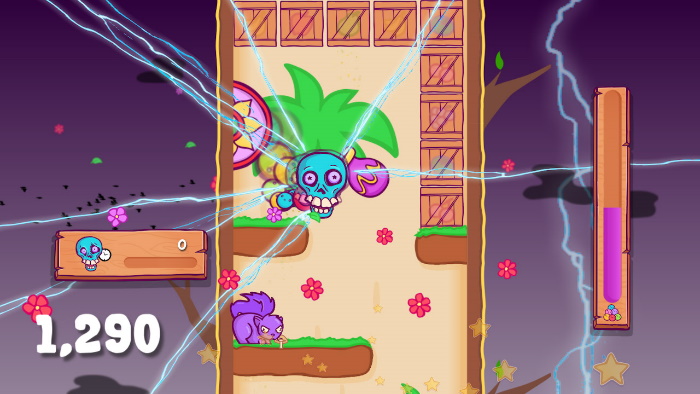 Controls for this pinball platformer are very easy to understand. You’ll move your character in small jumps by pressing the L and R button to move left and right, respectively. You can aim with the left analog stick for longer distances and launch Mr. or Mrs. Fruit with the A button. When you land in a cannon, you’ll be shot out right away – unless it’s a rotating cannon – and you’ll need to use the L and R buttons to move left and right so that you can land on another cannon or on solid ground so that you can make it to the stage’s goal as you move up the large tree. 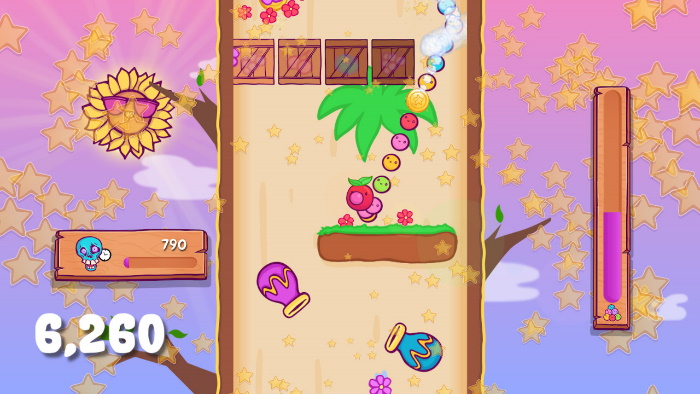 This is a relaxing 2D platformer with some pinball-style mechanics thrown in for good measure, and as you launch your character up the tree, you will try to do so in style, collecting as many of the fruit kids as possible to transform them back. There are also coins to collect, which will boost your score so that you can get as high a score as possible and collecting all coins, and all the fruit will award you with a “Perfect!” for the stage. The faster you are at reaching the exit, and the more fruit and coins you collect, the bigger your final score will be! 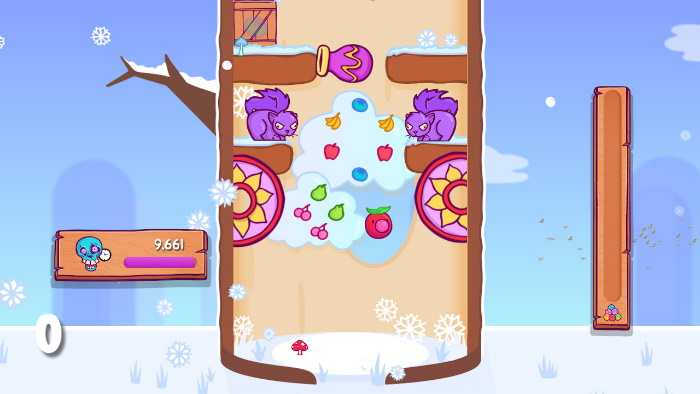 As you progress further into each level group, you will start to see new elements introduced at a steady pace. At first, it will be just Mr. or Mrs. Fruit making the climb, but you will soon run into stationary cannons that automatically shoot you out, rotating cannons you can trigger in the direction you want to go, boxes that get in the way, different types of square enemies, an evil-looking squirrel, pinball bumpers, and more. You need to hit enemies from above since, if you touch them from below or their sides, you will lose some of the fruit you’ve collected or the coins you’ve grabbed, forcing you to go down to the start of the stage if you want to 100% the level. 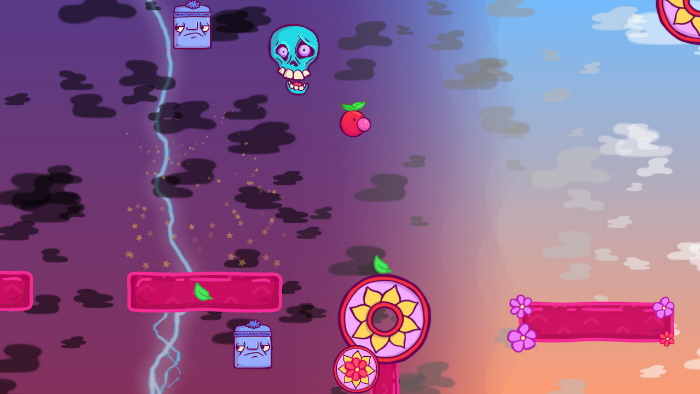 Between each set of levels, you’ll enter a sidescrolling level in which you’ll be racing up against Evil Skull Pedro. You’ll need to pay attention to the placement of each platform in this section so that you can bounce from platform to platform to reach the finish line in one piece. These offer a nice diversion from the regular tree levels, and I’d definitely like to see these expanded into longer stages with collectibles to pick up along the way in order to add some extra replay value. 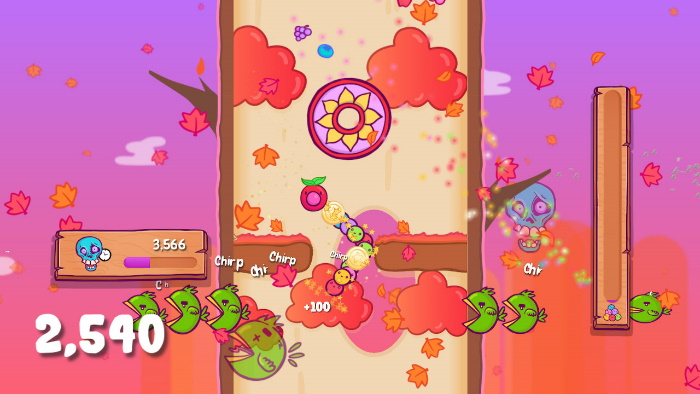 The game includes an Endless mode in which up to four players can participate as you all compete to see who can climb the highest without falling into the climbing water. You can take on this mode as many times as you want, and for each run, the overall layout for the platforms, the stationary and spinning cannons, the enemies, and the fruit will end up being different. Add to this that you can play Endless mode under themes based on the different seasons of the year, and you’ve got a mode that will prove to be fun when you have friends over.

Family Tree features an in-game set of challenges to complete, to mark the different milestones you can reach as you play. These include objectives such as collecting 50 apples, bouncing on three enemies in a row, collecting 100 cherries, collecting 5,000 fruit, getting a x10 or above multiplier, completing a stage with a single shot, finishing a stage with only one fruit, playing endless climb for an hour, rescuing half of the fruit children, and completing all of the game’s stages, to name some examples. 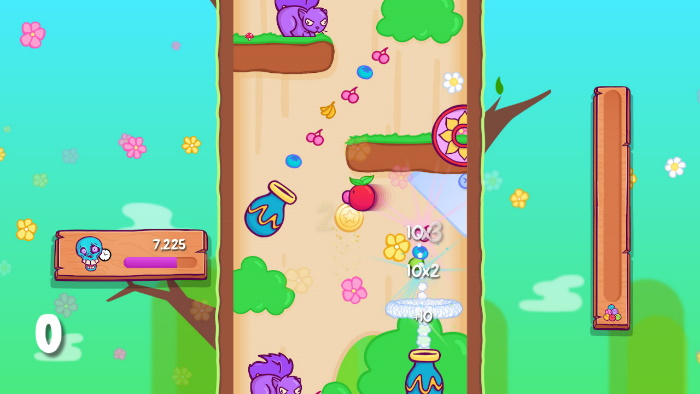 Family Tree is a fun arcade-style 2D pinball platformer on Nintendo Switch that asks for a fair budget price of $7.99. There’s more than enough content for the asking price, and the game features easy to understand gameplay mechanics that make it very possible for kids to take on this adventure without any issues. You don’t need to collect all coins and save all fruit kids, but for those of you that do need to get 100% on a game will some extra areas to play in many of the game’s stages.

Disclaimer
This Family Tree review is based on a Nintendo Switch copy provided by eastasiasoft.