Cubixx has made the jump to the Nintendo Switch, and it’s a must-have fast-paced arcade-style experience. Find out why in our Cubixx review!


Cubixx from Laughing Jackal and Ghostlight is a game that I had a blast playing on my PlayStation 3 many, many years ago. In fact, I liked It so much that I ended up writing a trophy guide for it to help fellow gamers unlock all of the game’s trophies. 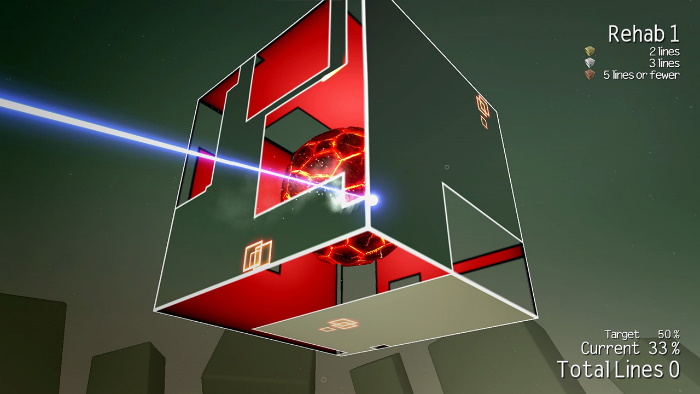 The main gameplay options are Arcade mode during which you’ll take on 50 levels that are split across ten stages – that is five levels per stage. Once you’ve reached certain milestones Arcade mode, other additional modes and challenges will unlock so that you can test your skills in full. The fifth level of every set will be a bit harder than those before it, and there’s a reason for this since completing that fifth stage will allow you to start again from the level right after it once you lose all of your lives.

You’ll move your laser pointers with the left analog stick or the D-Pad, and can cruise along any white lines on the cube without issues. If you need to get a better look at things, you can zoom in and zoom out as needed with the ZL and ZR buttons. Your laser is activated with the A, L or R buttons, and while the laser is going, you can use it to cut an area on the surface of the cube to remove sections from play on each of the cube’s faces. The good news is that you don’t need to keep holding down the button once you’ve started cutting… but if you do keep holding on to the button, you will be rewarded – more on this in a bit. 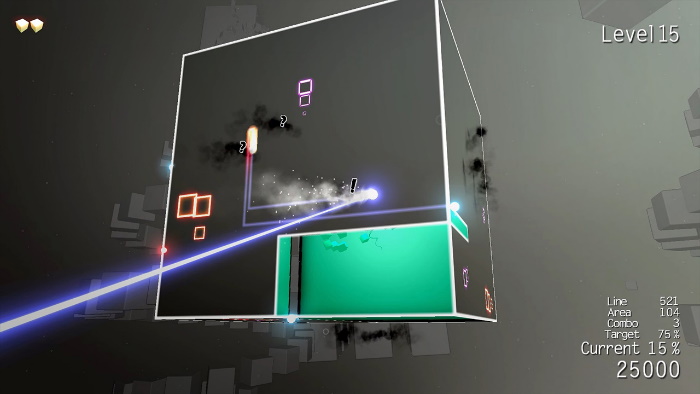 As you do this, you need to be aware of the titular characters: the Cubixx. These are cubes that move around at a steady pace, with a movement pattern that is not always easy to decipher. If you’re trying to cut a part of one of the faces of the cube and one of the Cubixx touches your line, then you will explode and lose a life. This is very important because if you run out of lives it will be game over and you will have to start all over, learning from your mistakes to give it another go. Cubixx are only one of the enemies you’ll have to face, with new and deadly enemies introduced as you progress in Arcade mode.

Cutting down areas of each of the cube’s faces will start to increase your completed percentage at the bottom right corner of the screen. To succeed, you’ll need to cut away a percentage of the area that is equal to the target percentage (or higher if you’re feeling adventurous). The bigger the area you’re trying to cut away, the bigger the score you can end up getting for your efforts. You will get an extra life for every 200,000 points you score, so getting a chunky score is something you should always keep in mind. 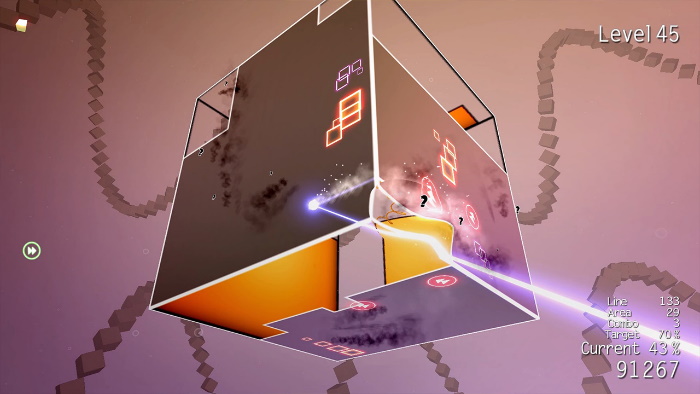 Combos are obtained by pressing and holding down the A, L or R button to activate the laser, and without releasing the button, keeping your line going over more than one face of the cube. For each face of the cube you take your laser line into, your combo will go up by one. Since a cube has six faces in total, that means you can get a combo of six going… but you can actually go higher than that! There is a special power-up that will boost your overall combo by one, so you can effectively get a combo of seven to greatly bump up your score.

Speaking of power-ups, there are many power-ups of different colors that you should be aware of. Those that are of a green color are good for you, blue ones will boost your score or your combo, and red ones should certainly be avoided – at least red power-ups will also add a bit to your overall score! The green power-ups you can collect are Freeze, which stops enemies for 5 seconds, Speed Up, which boosts your speed for 10 seconds, Shield, which protects you from enemies for 10 seconds, Extra Life, which gives you an extra life in Arcade mode, and Kill, which grants you an extra kill in Death Match mode. 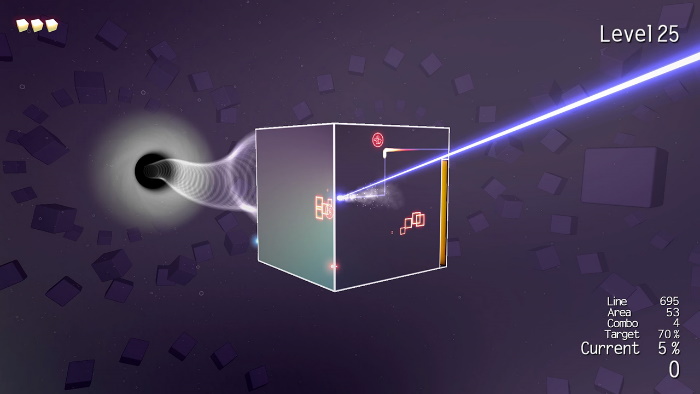 The red power-ups you will have to avoid are Fast Forward, which speeds up enemies for 10 seconds, Slow Down, which will slow you down for 10 seconds, Asteroid Attack, which will activate an asteroid shower over the cube, Combo Breaker, which will lower your combo count by one, Reversi, which is going to reverse your controls for 10 seconds – something that could be deadly if you’re trying to avoid coming into contact with a near-by Cubixx, and Sacrifice, which will kill you while also removing a single point from your score. As for the blue power-ups, they include a points boost of 20,000 points, a super points boost of 40,000, and the aforementioned combo boost which will increase your combo count by one.

Along with Arcade mode, you can also unlock another five additional modes. These include Time Attack, in which it’s you against the clock as you try to complete a level as fast as possible. You will have infinite lives, but every time you die, you’ll get a ten-second penalty added to your overall time total. For Score Attack you’ll have to get the biggest highscore possible on any stage with just the one life you start with. Line Attack has you scoring the most points possible from a single line in any stage. 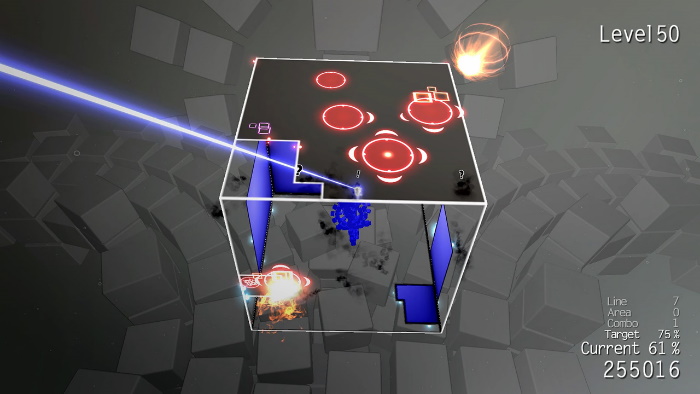 In Challenges you will take on 50 levels with a list of some very specific goals that are going to test your skills in full – these will include things such as completing a level by using a single line, killing 60 line chasers, getting a highscore of over 250,000 before you finish the level, and more. Death Match is a multiplayer match in which up to four players participate at once as everyone tries to destroy everyone else by cutting around opponents on the cube. If you’re too slow and do not make a cut on the cube for 15 seconds, then you’ll lose a kill. 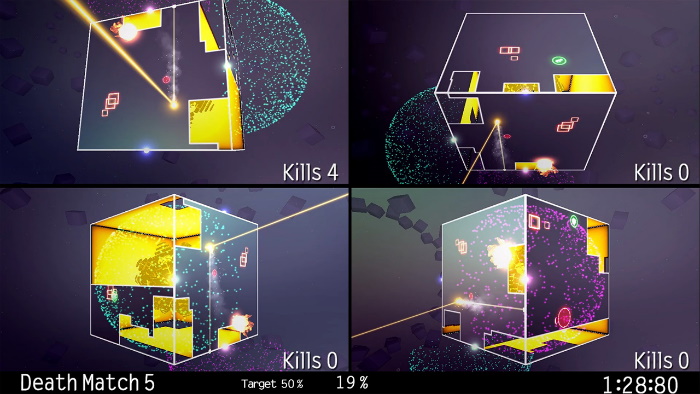 Cubixx is a highly-addictive fast-paced arcade-style game on Nintendo Switch that is a must-play. It’s an absolute steal at only $7.49 since you’re sure to get a ton of fun out of this budget-priced title, with all the different game modes you can enjoy on your own or in 2 to 4 player co-op/competitive. Can you beat all Challenges? That alone is going to take you hours to complete with the best grade!

Disclaimer
This Cubixx review is based on a Nintendo Switch copy provided by Ghostlight Games.

In Between Out Today on PS4

[PS4] Yu-No: A Girl Who Chants Love at the Bound of this World Review