River City Girls is a new couch co-op beat ’em up from WayForward and Arc System Works, starring Kyoko and Misako. If you’re a fan of the genre, you’ll have a lot to like in this release. Check our River City Girls review!


River City Girls stars Kyoko and Misako, two street-tough high-schoolers who must fight their way through the six regions of River City to rescue their kidnapped boyfriends, series mainstays Kunio and Riki. Along the way, they’ll utilize an arsenal of combos, counters, throws, and special attacks; battle an assortment of enemies; accept numerous side quests; level up with experience points; interact with NPCs (including guest stars from past River City games); and shop for a variety of items, food, and gear to boost stats and unlock new abilities. The girls can even wield weapons and recruit defeated foes to join them in combat!

This is a double review for River City Girls. Ceidz and ThaRaven403 played the game, and this review presents what they both had to say.

The story of River City Girls starts with the two protagonists of the game, Kyoko and Misako, suffering at school detention, when they receive the information that their boyfriends, Riki, and Kunio (who’ve been present in a lot of games in the River City franchise), have been kidnapped. It is then and there that they decide it’s time for them to get out of detention and rescue them!

Once you’re done with the intro… it’s time to brawl! At its core, this game is a beat ’em up, so you’ll punch and kick your way through the enemies with the Square and Triangle buttons for light and heavy attacks, while the X button will allow you to jump. As you progress through the game, your characters will gather experience points and eventually level up, which will grant new moves, increase their stats, and also allow you to purchase other moves at the Dojo, with some of them requiring a certain level to be purchased.

After the news for a new Streets of Rage game a couple of months ago, all my childhood memories of excellent beat ’em ups rushed in. I grew up with Double Dragon, Teenage Mutant Ninja Turtles 2, and Streets of Rage, but never really found anything in the last few years that lived up to the quality they had. After spending some time with River City Girls, I can say I’m quite happy with what WayForward has done. 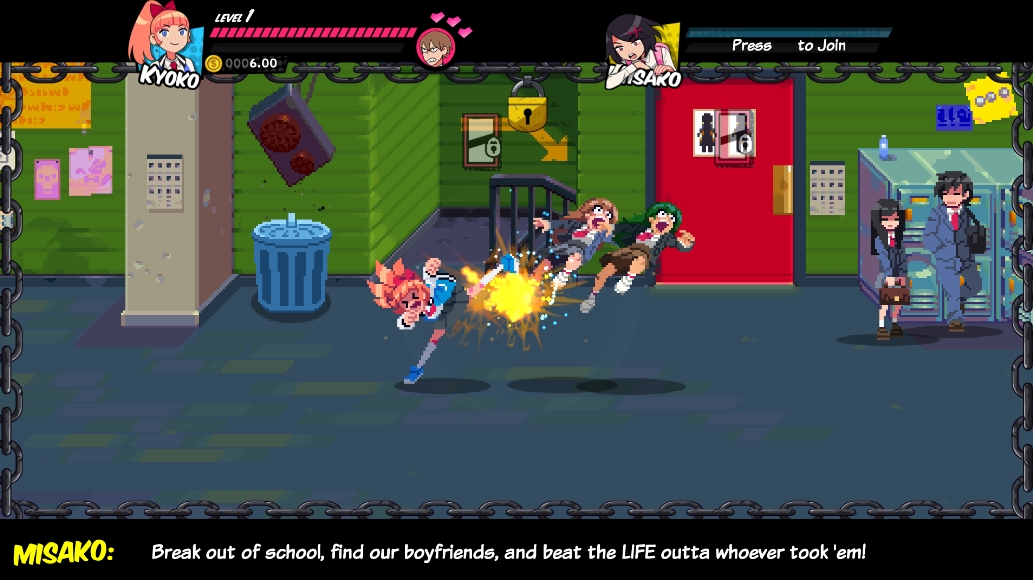 The one thing that stood out for me in this game was how the story and levels were shaped up with the semi open world vibe that really set things apart. Since the game also has side-quests for you to take on, there are actually a few reasons to revisit certain places, and since enemies respawn, you’re not just running around for nothing. The characters are also a lot of fun to listen to during their interactions with others, and you’re never too far from a solid line from one of the girls that helps make the story light and funny.

The one thing that I didn’t like for the game is the button mapping to enter new areas. For some weird reason that I can’t explain, they made it the same button as the light attack button (the Square button). So if you happen to be close to a door while fighting, chances are you’ll end up leaving your fight to go to the next room, which can become pretty annoying after a couple of times.

Trophy wise, any fan of beat ’em ups shouldn’t be afraid of this list, as the majority of the trophies are pretty straightforward. Completing the game on Hard could be a challenge, but since you also have to finish it in co-op, you might as well combine the two for some fun couch co-op action. There’s also a trophy for reaching 100% completion of the game, so be ready to hunt for those collectibles and side quests if you want that platinum! 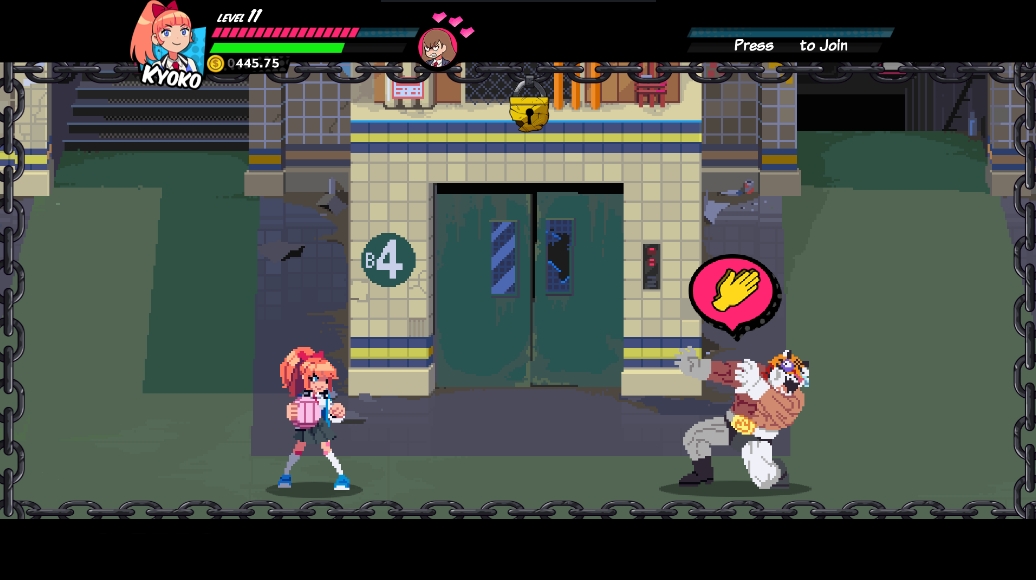 As soon as the game starts, we are greeted by a catchy opening, followed by a beautifully rendered cut-scene. When you start playing the game, you’ll be able to choose between two difficulties (normal and hard), if you allow friendly fire or not, and if you’re playing single or two players. You’ll also be able to choose which of the girls you’ll play, as you have the possibility to level them up individually.

Being a beat ’em up that supports multiplayer, I was pleased to see that the second player can join at any time. This made it possible for my daughter to have some fun by joining me once she had finished her homework for the day. Thanks to the drop-in multiplayer, she didn’t have to wait for me to finish a level or restart the whole game. 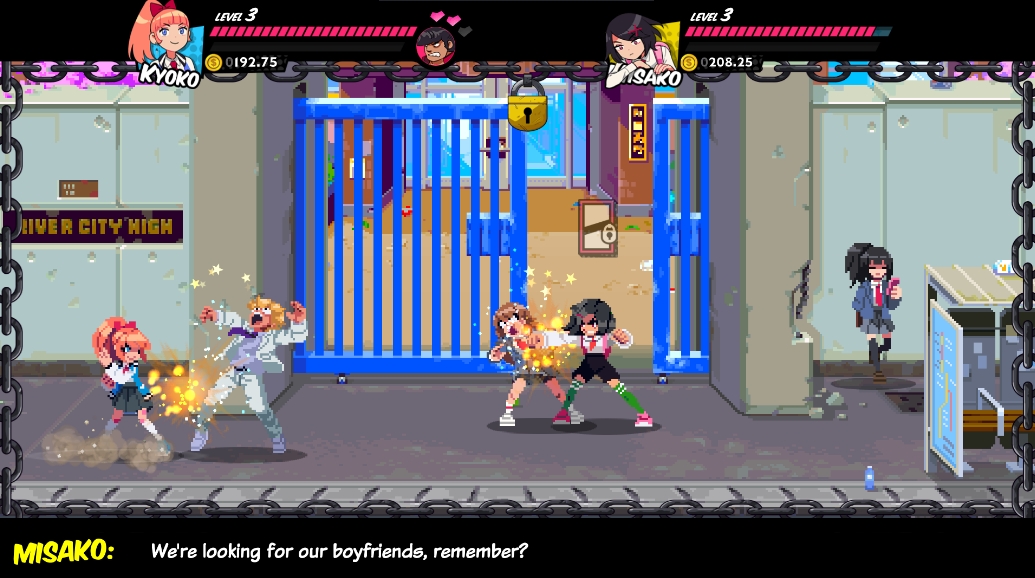 As for the gameplay, regular attacks are made by pressing the Square button, and the Triangle button is used for heavy attacks that are slower but deal more overall damage. Each time an enemy is defeated, your character will acquire some experience points, which gives you the possibility to obtain better attacks while becoming stronger. Sometimes the enemies you defeat will ask for mercy, and they can then be recruited into your ranks.


Something that sets River City Girls apart from traditional beat ’em ups is the fact that you’re not just progressing through one level after another. Each area is composed of a map with multiple screens you’ll be able to explore, but not all of them will be available right away. As you play, you’ll get access to new areas as part of the progression but also to previously locked spots, whether it’s through story progression or after obtaining certain items (like the school key), so some backtracking through the map will be required eventually.

As for the presentation, the pixel visuals are very good, and the cut-scenes are gorgeous. The music used in the game is also very catchy, and each scene is fully voiced. 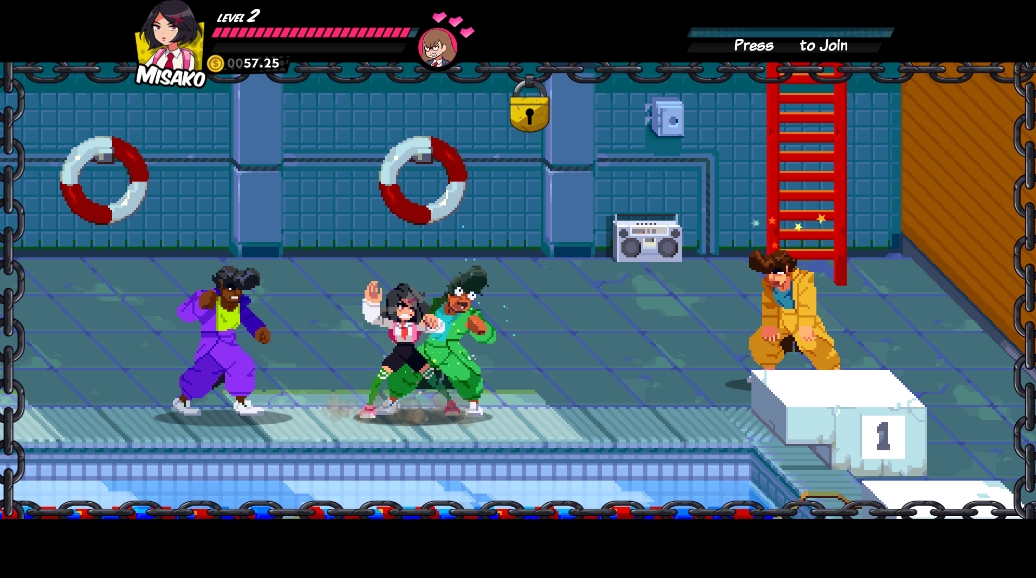 Final Thoughts
If you’re a fan of beat ’em ups, then there is a lot to love in River City Girls. The gameplay is easy to get the hang of, the presentation is great, and the soundtrack is quite catchy. The semi open-world setting was also fun to explore. This game is easy to recommend to beat ’em Ups fans looking for a great experience! 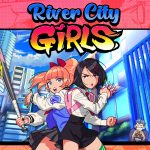 Disclaimer
This River City Girls review is based on PlayStation 4 copies provided by WayForward.