Mind-bending 1 vs. 1 shooting fights? Count me in! Learn more about this virtual reality release in our Telefrag VR review!

Telefrag VR is a hellishly fast-paced, competitive arena shooter with visceral movement and combat mechanics inspired by classic FPS. As a space gladiator, dash, run, shoot and teleport around unique arenas that feature impossible geometry where there is no right side up, and where death can come from any direction. It’s time to fight for the glory of the Eternal Roman Empire! Tools of Doom – Pick the best one, including classic arena shooter weapons, such as Rocket Launchers, Flak Cannons, as well as futuristic Plasma Rifles. Each weapon features two firing modes and a unique teleportation attack mechanic! Fluid Movement – Combat in VR has never been so dynamic! Choose between Dash or Smooth Movement and take your enemy by surprise. Short and fast jumps from place to place allow you to constantly control the area. Impossible spaces – Fight in unique arenas arranged with no regard for gravity, opening up various angles of attack and movement.


Telefrag is a 1 vs. 1 first-person shooter with a twist: you’re playing in interesting arenas with space to traverse in every direction and gravity affecting you in every direction as well. As with most PS VR reviews, let’s begin by talking about hardware. You can use the DualShock 4, PlayStation Move controllers, the 3D rudder, and now by way of the latest patch, PlayStation VR Aim. Lots of ways to play the game, the best way to play is with the PS Move controllers as you are dual-wielding and can point your guns in different directions. It does make locomotion a bit more difficult. The PS VR Aim having directional sticks makes navigation a lot easier, but it doesn’t let you control your guns independently. Different control schemes different payoffs. That being said, no matter which controller option you use, you will be able to play it. 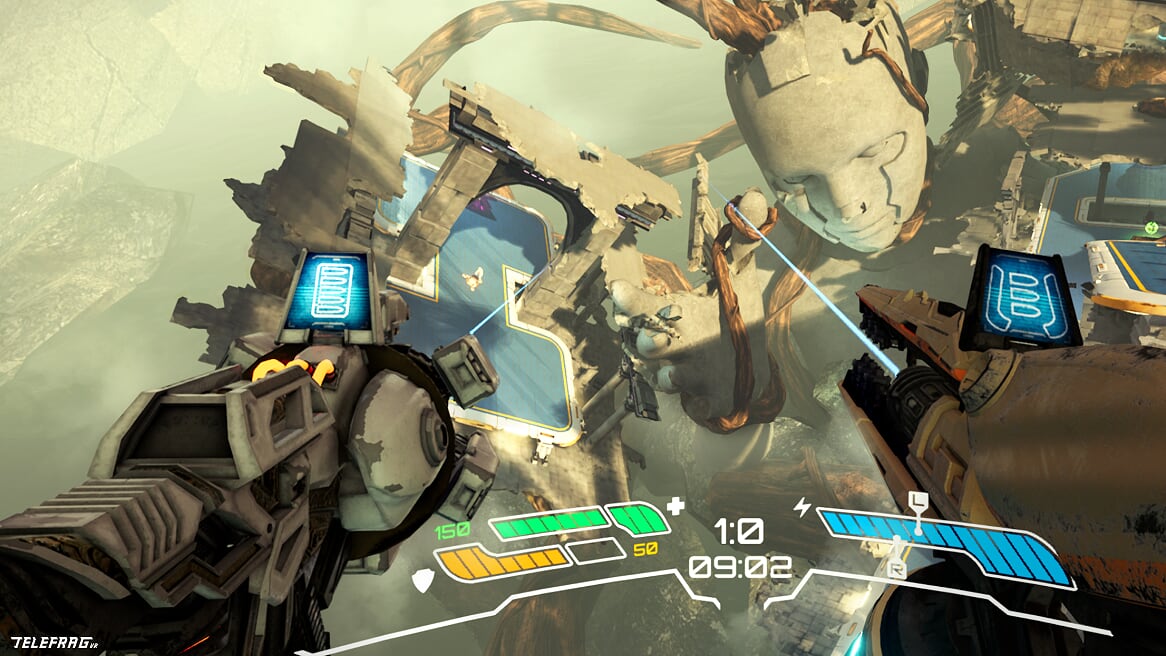 The game gives you a teleportation gun, and you can shoot it at any surfaces, and it will teleport you there. If you look above you and see a flat surface, aim up and shoot the teleporter gun, and you will not be transported to that plane. If you see a surface on the side, aim and shoot and now you’ll be there. It really opens up the arena once you realize the movement liberty that’s available to you. It allows you to be aggressive in each battle or retreat and try to set up a trap for your opponent. But you do have to remember that your opponents will have the same move set, so you need to be careful!


The core concept of the game is quick 1 vs. 1 matches in a best of out of three sets. You can shoot your opponents with the vast arsenal you are provided, and my preferred way to dispatch opponents is by the game’s namesake: the TeleFrag. This is when you hit your opponent with the Teleport gun, essentially teleporting yourself directly into them, which makes them go boom. It feels so satisfying to land those hits, especially if they don’t see you walking on a different plane – a really great system. 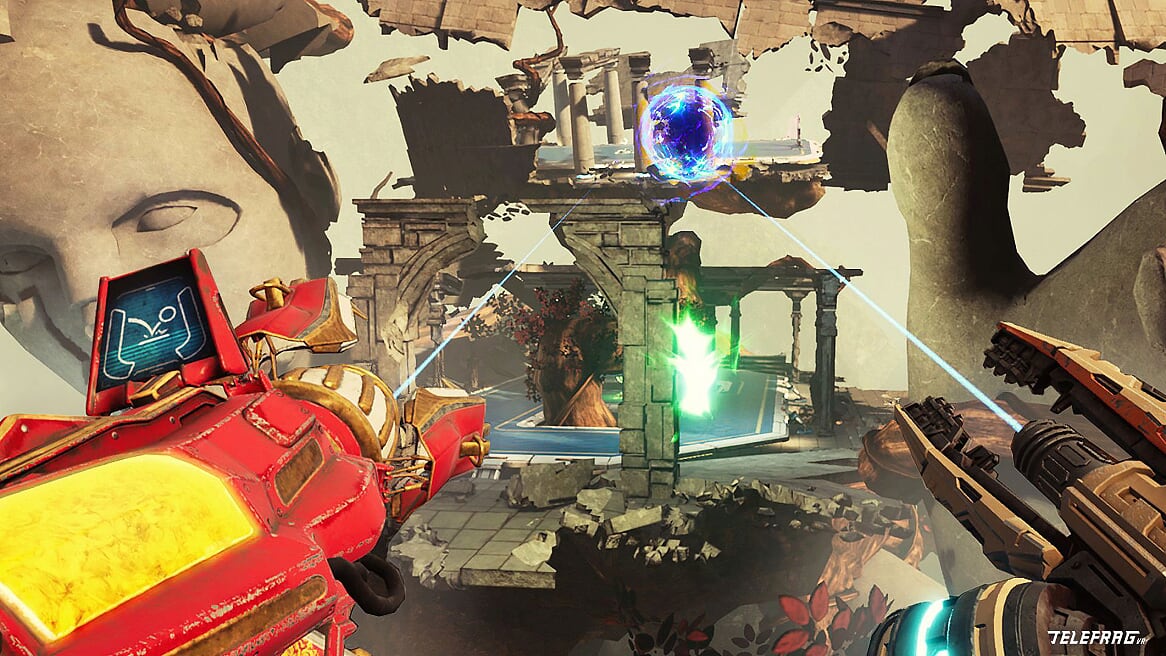 The game’s a ton of fun with a quick pace to the matches, reminding me of older games from yesteryear including Unreal Tournament and Quake. It’s easy to get sucked in for a while… which brings me to one of the game’s issues. It’s a multiplayer game, and finding matches for one on one combat can be hard, especially during not peek times. That being said, Telefrag VR has cross-platform play with the versions for other VR hardware, and the player base will hopefully grow as the game is a ton of fun.

Telefrag VR’s aesthetic reminds me of the older shooters a lof of us grew up loving, and it’s a vibe I approve. The game has it’s own look and feel – accentuated by the PlayStation VR hardware – but I love the nod to the past. Telefrag VR has several well-designed arena’s each with its own theme. Add the immersion of virtual reality, and you have an overall great experience. 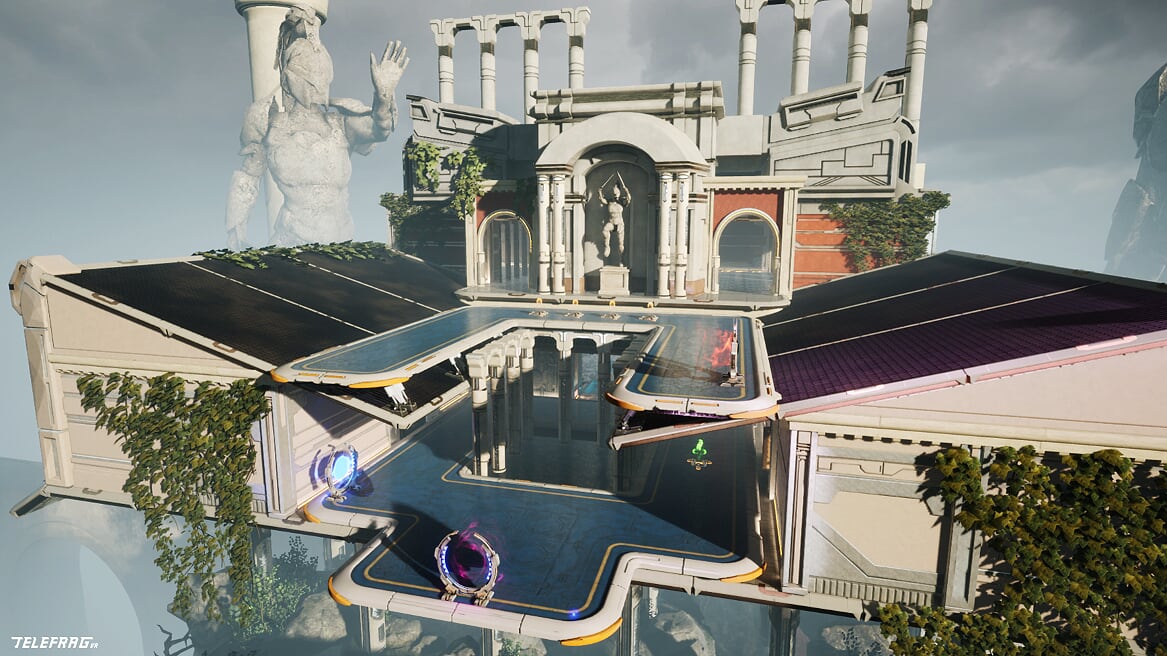 Telefrag VR is a very fun 1 vs. 1 shooter. I loved the strategy that teleporting adds to the game, and matches are fast-paced, which makes them more fun. I did struggle sometimes with finding a match, but that will surely change once more players join in. I have to applaud the developers adding PS VR Aim support. This is a great game on PlayStation VR, so hopefully you give it a shot.

Disclaimer
This Telefrag VR review is based on a PlayStation 4 copy provided by ANSHAR STUDIOS.

[FREE Game] We. The Revolution GIVEAWAY (Nintendo Switch – US)