The Sojourn is a relaxing puzzle adventure that will take you on a journey that will challenge you along the way. Learn more in our The Sojourn review! 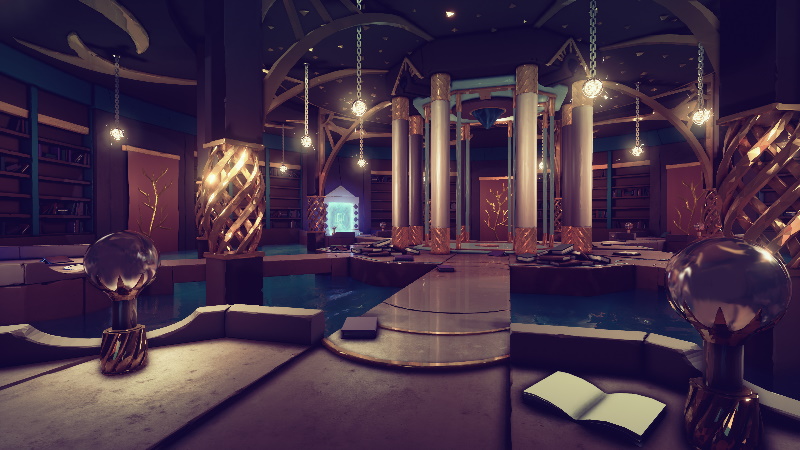 The Sojourn is a new puzzle adventure game on PlayStation 4 from Shifting Tides and Iceberg Interactive. It is a tale of light and darkness, in which sparkles will guide your journey every step of the way. You will start in a dark room, but will quickly spot a sparkling energy sphere that is floating towards a hall. As you follow this sphere, it will open the way into another room where everything is rebuilt as the light lights up the spherical metal lanterns hanging around the area. It will lead you to a new room that will also be rebuilt one lantern at a time, and it is from this room that you will be lead into the first chapter of your adventure.

The energy sphere will be joined by a second one, and together they will rebuild a massive set of stairs that lead the way into a temple of sorts. As you move deeper into the temple, you will arrive at a corridor that has not been rebuilt in full, as you can see from the big chunk of wall and ceiling that is missing, as well as from the floating stone pieces that have yet to be returned to their former place. From this corridor, you can see a distant tower that oversees a series of square and rectangular structures with windows. What could that possibly be? 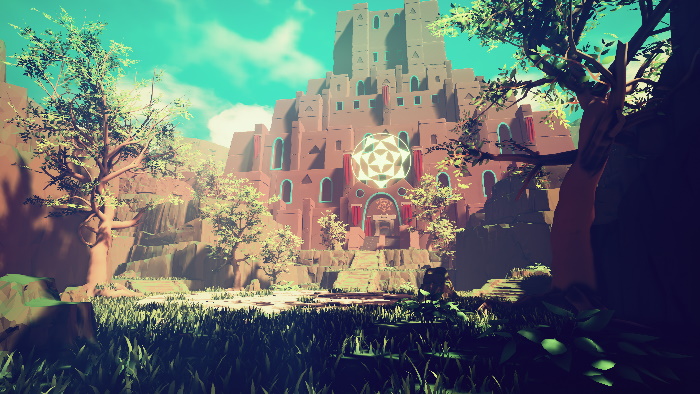 It turns out that everything is not as it first seems, as you can see when you enter a flame that transports you into a dark world. Once inside of this dark world, you will notice a bar at the center of the screen. This bar will represent the power granted by the flame, and it will diminish with each step that you take. Once it runs out, you will be transported back to the world of light. As you can imagine, entering the dark world and planning where you explore and what you do while in there is going to play a part in The Sojourn’s puzzles.

There might be some platforms or walkways that will not materialize unless you are inside of the dark world, so be sure to plan your route as soon as you enter the flames, or else you might run out of energy at the worst of times! The good news is that even if you end up falling by having a dark world platform disappear when you run out of energy, you will quickly respawn nearby so that you can give it another shot. 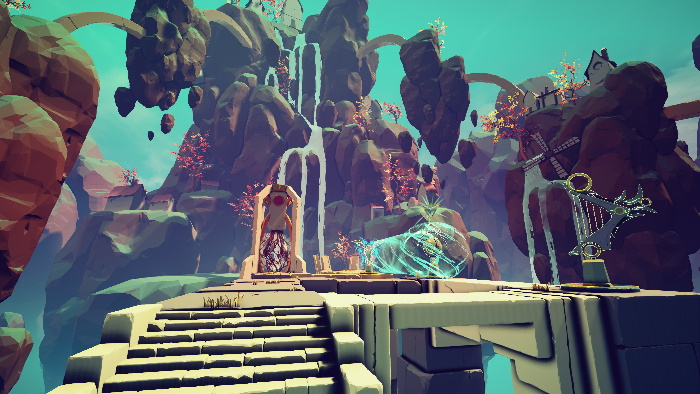 You’ll move around with the left analog stick while the right one is used to control the camera in order to adjust your view. You can jump with the X button, interacting with things with the Square button. You can rotate some statues right by pressing R1, and left by pressing L1. The final action you can do is swap places with some statues by pressing the R2 button, as long as said statues are activated. Swapping places with a statue will not consume any of the dark energy, so it’s a great way of moving over a longer distance without depleting your stock. The R2 statue can also be used to ring special statues that, with their music, will rebuild structures around them for as long as their song is playing.

Without spoiling things too much, I’ll discuss one of the early puzzles you run into a few minutes after starting your journey. You will reach a flame that will take you to the dark world, filling up your energy. There is a new walkway that appears as soon as you enter the dark world, but as you walk towards it, you realize that you don’t have enough energy to reach it and safely cross it before it disappears. There’s a nearby statue, and at first, swapping with it doesn’t seem to solve your problems. The good news is that you can swap with the statue from anywhere in the area, which means you can walk halfway towards the dark walkway, swap with the statue, walk towards the flame to refill your gauge, swap again, and you’ll be mere steps away from the walkway. 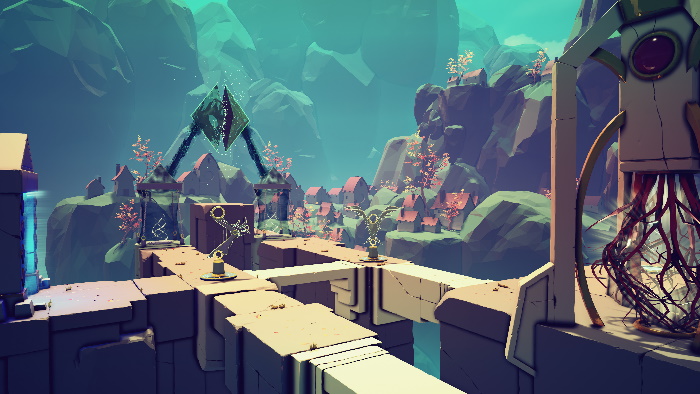 This is not the only type of puzzle you will find in The Sojourn, but since I don’t want to spoil the whole experience for you, I will only be talking about one more thing you will find. There will be dark gates that will not open as the energy spheres approach. How can you open them? Well, you should make your way to a flame so that you can activate a statue, and then work towards swapping your place with it a couple of times until you can place it over a special platform that is connected to the dark gate by a set of even darker energy.

As for the trophies for The Sojourn, most of them will come from progressing through the game by way of witnessing each of the statues that slowly moves the story forward, as well as from completing each of the game’s chapters. You might also want to take on the optional side challenges that stand on their own and which will reward you with some extra insight as well as adding to your trophy count as you carry onward on your path towards getting a new Platinum trophy for your collection. 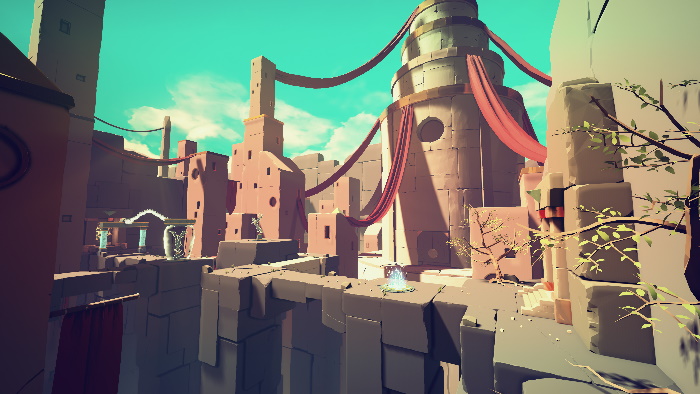 The Sojourn is a relaxing puzzle game that I had been looking forward to playing since it was announced for PlayStation 4, and I’m here to report that it’s worth the wait. The game introduces new puzzle elements at a steady pace without ever feeling overwhelming, with a nice difficulty curve that has only a couple of spikes out of place. Along with the main content, you can also aim at completing the additional challenges the game throws at you, in case you want to take on a higher difficulty set of puzzles.

Disclaimer
This The Sojourn review is based on a PlayStation 4 copy provided by Iceberg Interactive.