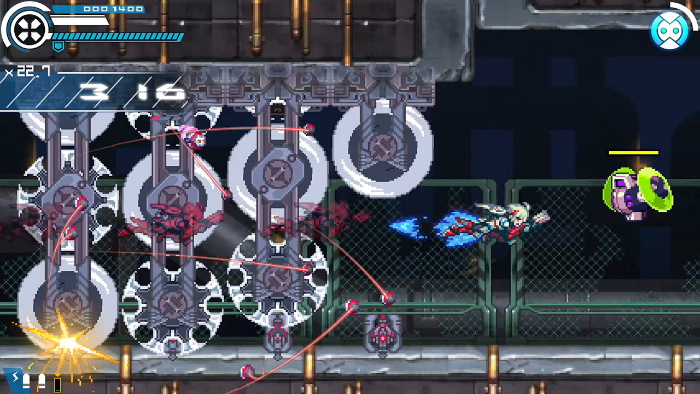 Gunvolt Chronicles: Luminous Avenger iX is a spin-off from the Azure Striker Gunvolt series, set in the same overall universe. The series got its start on the Nintendo 3DS with Azure Striker Gunvolt and its sequel, and we later got both games in an excellent bundle called the Azure Striker Gunvolt Striker Pack, which included both games as well as all DLC, a boost to 60 fps, HD Rumble, a revamped UI, a new vocal track, and more. This time around Inti Creates is taking the Gunvolt universe in a slightly different direction, focusing on Copen. Luminous Avenger iX – Copen – sets out to protect a group of Minos, humans without Septimas. They’re in grave danger since the Sumeragi Institute, the Promoters of Evolution has set out to eradicate every single Minos. Most have already been exterminated, but a group of kids, led by spunky Kohaku, have somehow managed to survive. 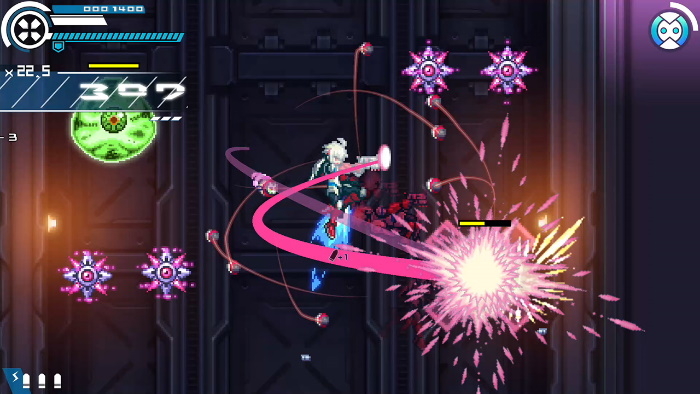 Since this 2D action-packed game was created for current consoles, it takes advantage of the extra power of the Nintendo Switch right from the start, with bigger spites and no slowdown, which makes for a more fluid and fu experience. There’s also lots of voice acting (available only in Japanese with subtitles), and great HD art during cutscenes and interactions between characters. 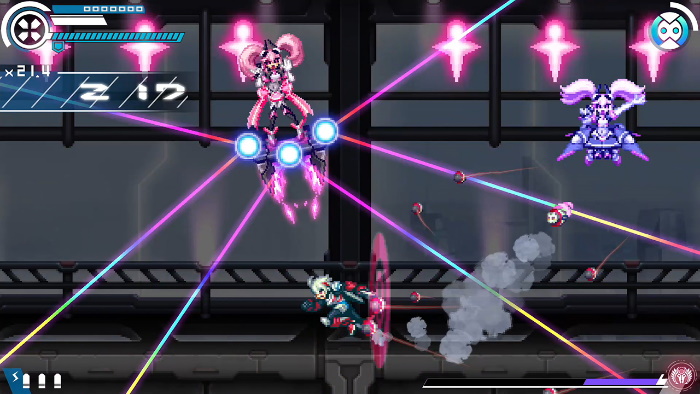 You’ll move Copen around with the left analog stick or the D-Pad, dashing with the L button for that extra burst of speed, as well as to lock-on when you touch an enemy, so that your shots with the Y button turn into homing shots. You’ll jump with the B button, and can wall jump as well as hover down from a jump. Using your equipped EX weapon is mapped to the A or R buttons. EX weapons are the special weapons you get after defeating each of the bosses in the game, once your partner Lola copies the Septima of each boss you crush with your power. As expected, each of the bosses will have a particular weakness to one EX weapon, in particular, so be sure to mix things up as you search for the right combination for each battle! For your convenience, you can switch between your available EX weapons by pressing the ZL and ZR buttons. 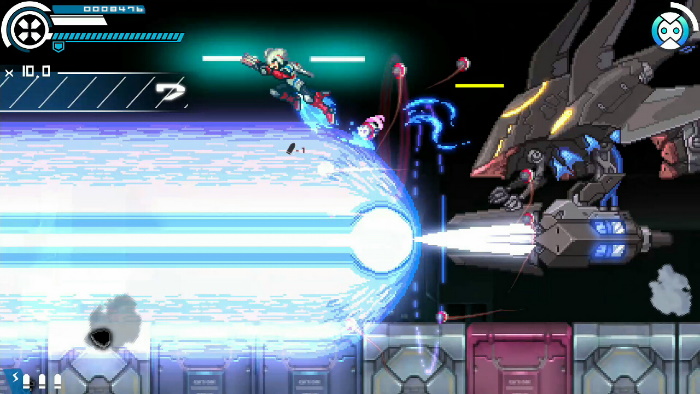 Copen has a special set of actions that consume bullit units. You can reload your bullits by pressing down twice on the left analog stick or the D-Pad so that you can always have some to depend on. You can, for example, do a bullit dash in the air which will consume one bullit, allowing you to even change your dash trajectory as you go. If you’re about to be hit by an attack, as long as you have two bullit available, the damage will be canceled thanks to the prevasion skill – a skill that seasoned players can decide to turn off to bump up the challenge. Thanks to this, players of all skill levels will be able to take on Gunvolt Chronicles: Luminous Avenger iX. 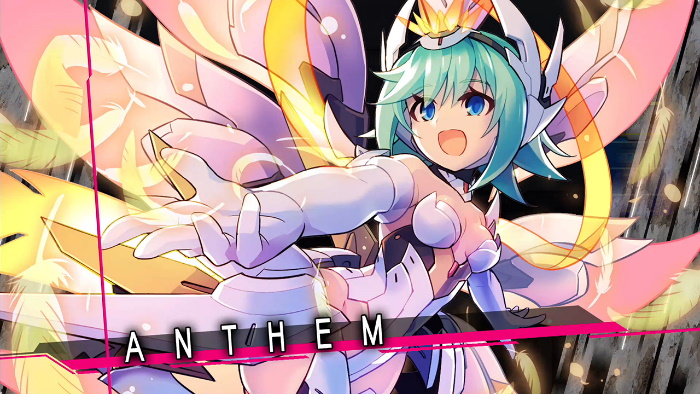 Based on your performance in each stage, you will be rewarded with kudos. If you manage to collect 1,000 kudos in any given stage, then your partner Lola will start to sing, which will send Copen into overdrive mode. What overdrive does is boost Copen so that it can gain access to overdrive abilities that are quite powerful. Another way for Copen to enter overdrive is if when his hit points reach zero, Lola’s anthem ability triggers – which will happen at random. If Anthem does come into play, Copen will be completely healed, will go into overdrive, and will be able to use the bullit dash without spending any bullit. To boost the odds of Lola singing, you should make sure you always interact with and talk to other characters in your group a lot before each mission. 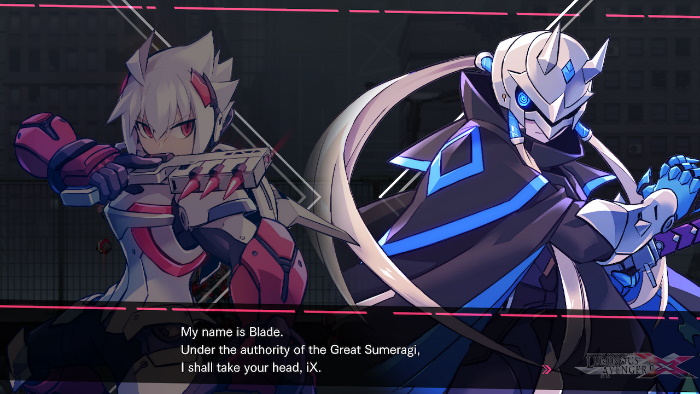 The credits you collect during your missions can be used back at the home base of operations to customizer Copen. You start out with the auto-hover, prevasion, and anthem skills – which you can deactivate for a bigger challenge – and you’ll be able to spend your credits on other boosters that will add a nice variety of skills to your arsenal. You could, for example, spend a nice chunk of change on the EX Saver, which halves energy consumption for EX weapons, Bounty Hunter, which gives you an extra ten credits for every enemy you defeat or perhaps get some extra bullits, to name some examples.

If you’re a fan of the Azure Striker Gunvolt games, then Gunvolt Chronicles: Luminous Avenger iX is a no-brainer, and you should get it for the Nintendo Switch ASAP. But even if you’re new to this universe, Gunvolt Chronicles: Luminous Avenger iX is a great way to get acquainted with it. The tight gameplay mechanic, interesting art style and boss designs, the amount of content you get, it’s all worth the $14.99 asking price. 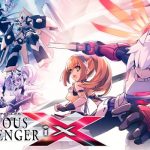 Disclaimer
This Gunvolt Chronicles: Luminous Avenger iX review is based on a Nintendo Switch copy provided by Inti Creates.

80 Days Out Next Week