Join your lil’ Mech buddy to plan a flawless strategy, then marvel at just how wrong you were!

Not to worry, play some power actions to get your team back on track, or dare to trust in your instincts and crafty skills, and pull off a stunning win!

Boasting online multiplayer functionality for up to four players, Mini-Mech Mayhem has a highly accessible strategy component with deeper underlying mechanics and heart-warming humour at its core.

Free chat with social comfort features, combined with huge customization options for both mech and avatar, means you can also wear what you want in a safe and pleasant virtual play space!


Mini-Mech Mayhem is a new turn-based strategy game from Futurlab, who have also released the very fun Surge, Velocity, and its sequel Velocity 2X. It pits you against up to four players or AI opponents, and what makes this one even better is that it’s a PlayStation VR game that allows you to really dive into the action. 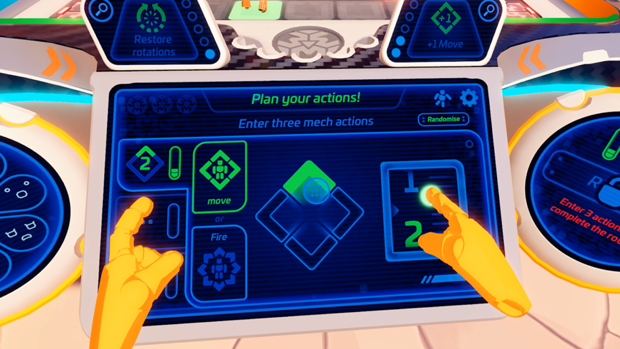 The game focuses on you taking on a 9×9 grid with other players. You all have mechs that you can customize, adding new parts as you earn them. All the parts are just cosmetic, but as you get more, you’ll want to show off your cool new customizations, especially as this game puts a focus on social multiplayer. You also have a personal avatar that you can customize as well that represents you in the VR world. I had a ton of fun when I first loaded the game trying to design mine!

Since this is a PlayStation VR game, let’s talk about the controller options. The game is playable with a Dualshock 4 controller or the PlayStation Move Controllers. Personally, when I have the option to use the Move controllers, I will do so as I find they give a deeper sense of immersion into the game and on how to interact with things, and that was definitely the case here as well. Both of the Move controllers act as hands when using the console in front of you, giving it a very natural feel. 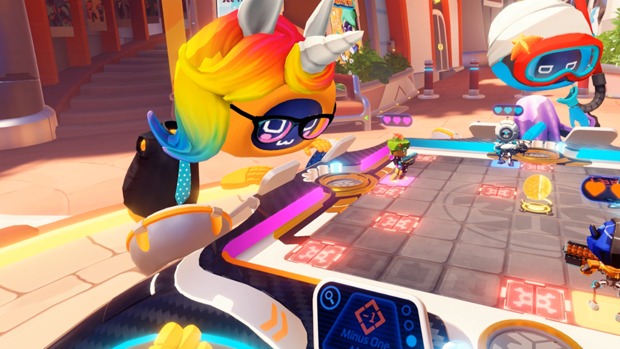 Before jumping into the multiplayer mayhem, I would definitely suggest going through the single-player campaign which acts as a tutorial. The first few levels will definitely be played at a much slower speed, and I do wish the dev could have taught me some of the skills of the game at a faster pace. Eventually, you get to some challenging matches against tough AI opponents. While this is good for a while, the game is best played against real human opponents. Depending on the time of day, I’ve had a varying degree of success for getting online matches to play.

Mini-Mech Mayhem is easy to understand. All the players have a user interface in front of them to interact with. You need to program choices for your mech on the grid through the interface, and that can be moving or attacking. The goal is to win enough victory points. You can obtain them by reaching the victory square on the board or by destroying your opponents’ mechs. What you have to keep in mind is that your opponents have the same goal and are trying to do the same to you, so you need to plan ahead to beat them. 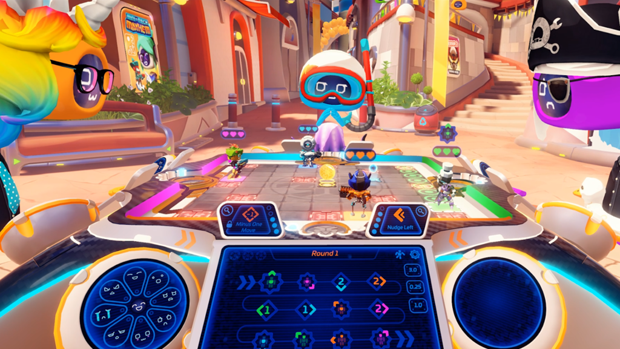 When planing your turn, you can make up go three moves. Each player can do this, and then all will make their first move. And then, the second one. And then a third one. You can choose to move your mech on the first time, selecting what direction to take and how many squares you move. The next turn, you could fire in the direction of your choice. Then on the final turn, you could move to either get closer to the victory square or away from where attacks will be coming from.

You can actually choose what part of the mech you want to aim for as well, adding another layer of strategy. Hitting different body parts will have a different effect. Hitting the legs will cause them to go a different direction, hitting the head will knock them back, and hitting the arms changes the direction in which a mech will fire. Each of these actions requires energy, so you need to be wise in how you use it. You can also do Intercepts, which are different moves that require energy but can alter the course of the game, whether it’s calling in an airstrike on the board, or even making another mech take a step further, dropping them into a trap. The more powerful of an Intercept, the more energy it consumes. 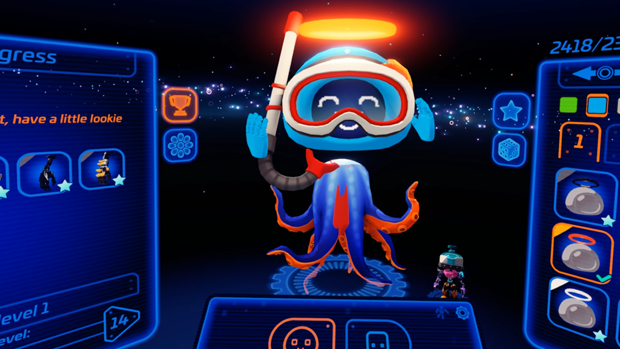 I talked earlier about the customize options for both your avatar and your mechs. You will unlock more and more as you play, and I really enjoyed changing the way my mech looked. I do have to say that being able to obtain new pieces as I played was one of the reasons that kept me coming back for more. The game looks great, the mechs are adorable, and their interactions are a lot of fun. My one complaint is the lack of a variety in the arena. While you play in what seems to be a futuristic city that does look great, having other arenas or areas would have gone a long way. 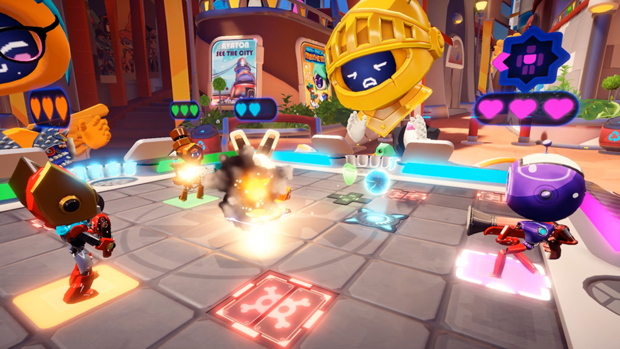 I found Mini-Mech Mayhem to be a really fun and immersive PlayStation VR title. It controlled really well with the PlayStation Move controllers, and I liked the strategy aspect. Even though the game does require a bit of luck, it’s still a lot of fun to pay. I loved the customization of both mechs and avatars. Hopefully, the player base will continue to grow, as this is a game that deserves to have a long life.

Disclaimer
This Mini-Mech Mayhem review is based on a PlayStation 4 copy provided by FuturLab Limited.