The Age of Wonders turn-based strategy series got started way back in 1999 when the first game from Triumph Studios was released for PC. With its 20th anniversary on the horizon, the studio and Paradox Interactive have decided to release Age of Wonders: Planetfall on PlayStation 4. The game is available as a Standard Edition, a Deluxe Edition with a deluxe theme, two cosmetic packs, and a scenario planet, or a Premium Edition that includes all of that as well as the Season Pass, which will unlock three expansions at a later date.

As for the setup for Age of Wonders: Planetfall, the Space Union, an intergalactic government, is no more. In turmoil, different factions make a move for gaining control of the many planets in disarray, no matter the cost. You’ll get to meet the Vanguard, the most “normal” of all factions, with their soldier units, vehicles, and support units, the Dvar, which could be described as space dwarves, the cyborgs from the Assembly, the bug-like alien Kir’Ko, the sneaky and dark Syndicate, and the all-female Amazons… riding dinosaurs that have lasers. 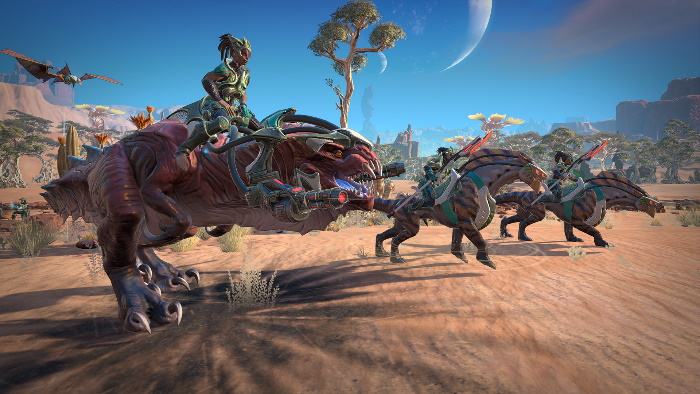 A straightforward game this is not, so I suggest that before you try to take on a campaign, you dive into the extensive tutorial. You’ll be started in Dolos Minerva, a small world that will allow you to get the hang of things by searching for survivors and finding out what has happened in the area. You’ll be helped by A.I.V.A., the autonomous Integrated Virtual Assistant, who will provide you with new messages whenever something important needs to be covered so that you can learn about it and act accordingly.

A.I.V.A. will also let you know about the basic controls so that you can quickly get right into the turn-based strategy action. You can pan the camera around with the left analog stick and can zoom in and out with the right one. Selections are made with the X button, and you can deselect with the Circle button. The Triangle button will bring up your radial menu, which will allow you to access the in-game menus. This includes the Overview, Diplomacy, Objectives, Imperial Archives, Research, Operations, and Unit Template Manager menus, as well as the option for skipping a turn.

The Overview menu will show an overview of the world map you’re traversing, the colonies under your command, your HQ colony, your armies, heroes, and items, as well as show you an events log. Diplomacy shows faction information and the relation of NPCs to you, allowing you to start negotiations to speak to another faction. Objectives will list the overview of objectives for you to complete, be them from NPC factions or from other sources. Operations will highlight all pertinent information on your strength and defenses. 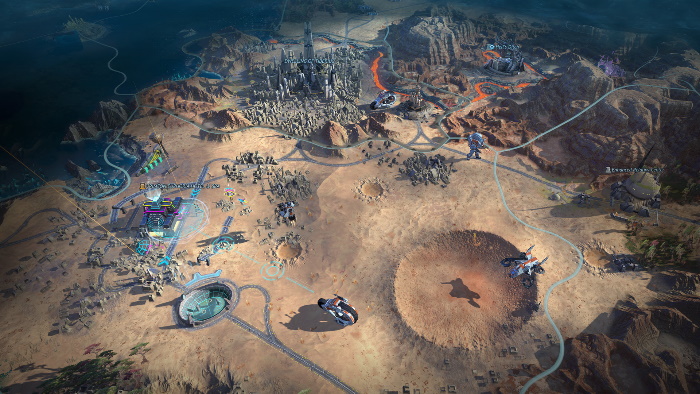 The Imperial Archives will be a vast resource for you to learn a lot more on all of the things you need to understand to be able to survive in Age of Wonders: Planetfall, such as abilities, accuracy, how combat works, how militia and morale help you in battle, collectibles you can obtain to gain resources or other rewards, and more. The Unit Template Manager will show you the mod templates for the units you have in your control, allowing you to remove the templates or to create new ones by modifying existing templates. Research will, as the name suggests, allow you to use knowledge points to research new technologies that can aid your units and facilities – perhaps you’d like to unlock some extra protection for your units?


As you explore a world, you will be moving armies around the hex-based layout to attack enemies. Each army can have up to six units – your hero include. You can review each unit’s abilities by clicking on their portrait. An army will have a set number of spaces it can move over during its turn, so do keep this in mind so that you can plan where to move it to so that you can not only be able to attack enemies, but also remain ready to defend your colonies in case of an attack on your base.

Speaking of your colonies, you also need to inspect your colonies to be able to build structures that can aid you on your journey. Each colony will generate an amount of each of the different resources, which you can put to good use for building new structures to increase resource production, boost a colony’s defenses, obtain new units to command, and boost the strength of its economy. You need to remember that some structures will have an energy upkeep cost, which will be paid each turn. Structures also take a set number of turns to be built, so you can’t just drop new structures into play right away. 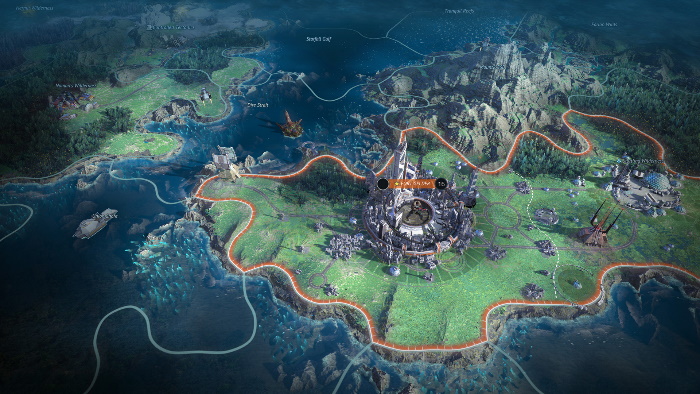 Without spoiling things, I’ll refer only to some of the structures you can check out during the game’s tutorial. You have the Military Skirmisher Barracks, which adds the ability to have Skirmisher units, unlocking the Vanguard Assault Bike. You could also build a Specialist Training Center which unlocks the Vanguard PUG unit, the Central Restore Core that boosts the energy grid by adding ten energy to your total or the Central Replicator Facility, a mini-factory of sorts that boosts a colony’s production.


As for battles, once you enter one your army will be placed in a separate and more detailed hex grid from which you will need to either attack the enemy (when you’ve engaged into battle) or defend your colony (when the enemy attacks you). The defending army will always move first in battle, and you can’t use tactical operations during the first turn. If there are more ally armies or hostile armies near a unit that is going to enter battle, all adjacent armies will enter the fight, so be careful when attacking enemy armies or else you might be outmatched right from the start!

Each unit in your army has three action points to spend on their abilities depending on if they cost one, two, or three action points per use. When an action is used, then that unit’s turn will be over, and you should never forget it! A unit will also have move points, but using these will leave it with fewer action points to use, so keep an eye on the tactical movement colors on the grid to be aware of how many action points it will have left. Moving a unit as far as possible might be needed sometimes so that it can use its next turn to attack from a better position. 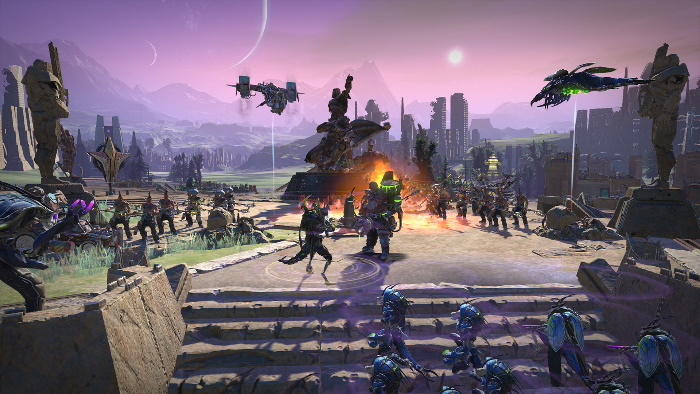 When in battle, you should make good use of cover options. Cover will make it harder for enemy units to hit you, as long as an enemy does not flank your cover since it is directional. Some rather large units can’t take cover, but they themselves can be used by smaller units as cover. Enemy units can also take cover, so be sure to check the direction from which they’re protected when they’re taking cover so that you can move your units to attack in a direction from which they don’t have the boost from the added protection.

You should also make good use of the added power of your commanders and heroes, as they can help to turn the tide of battle with their added strength and powerful abilities. Combine this with attacking units from their sides or back, and you will deal additional damage form that unit being flanked. The same can happen to you if you’re not careful, so be sure to pay attention to where enemy units are attacking from so that you can rotate your units to face them, thus reducing the odds of being flanked.

Each of the factions has different units, abilities, and support units to use in combat, so you can expect to have a very different experience when playing as one faction in comparison to the others. The Vanguard is the faction that will probably feel easier to use due to its familiarity, with its grunts, mechs, tanks, air units, support robots, and more. But you can also expect to see – or not – the camouflaged huntress, airborne alien shriek scout with its laser cannon, or the massive tyrannodon that can use its roar to cause panic or shoot with its very powerful lasers – all units under the command of the Amazons. 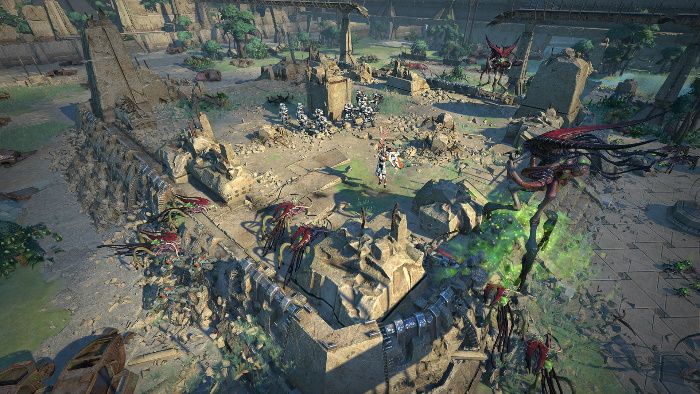 To expand your power on a planet, you can try and take control of additional sectors on the planet. You can see the outline for each sector from the main world map, knowing where you should head to in order to be able to colonize new areas. Each sector will provide additional natural resources as well as offer remnants of what once was the Star Union. Each sector will have a central sector map marker, and if you interact with it, you’ll be able to colonize it and add it to your economy. You can then exploit that sector for extra resources which will prove to be very useful.

The game offers many customization options for things such as enabling and disabling the animations when units move if you want the game to autosave after you end your turn, or having the game ask you for confirmation before executing the movement of armies on the world map. You can also set if you want to enable or disable observe mode, which makes it, so the camera focuses on all movement and action from other units as long as those happen within your vision range, if you want numbers to be displayed when damage is dealt to a unit, and more.


Unfortunately, as has become more and more common with games that are released on PC and on PlayStation 4, the size of the text used in Age of Wonders: Planetfall is very tiny when playing the game. The only time the text can be read from more than six feet away from the TV is when you’re looking at the main menu. If you’re exploring a planet or taking actions in battle, then you will need to sit closer to the TV, or else you won’t be able to read the text. There is an option to increase the display, but even at large it doesn’t make text look right from a distance. 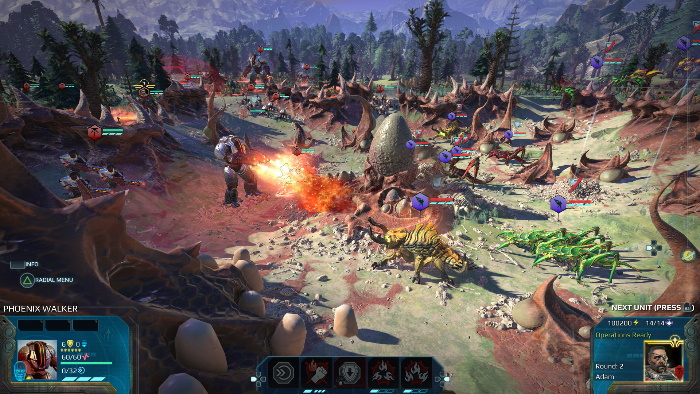 If you’re a fan of the Age of Wonders series, then this new entry is surely going to give you what you’re expecting. There is a ton of content to experience, with full campaigns for each of the six factions, all with very different playing styles, between the units, commanders and heroes you will command into battle, as well as the different skills and abilities you can research for each faction to give them an edge over the rest. You could spend dozens of hours playing the game and only scratch the surface, so for $49.99 this is a game that will be well worth the asking price. 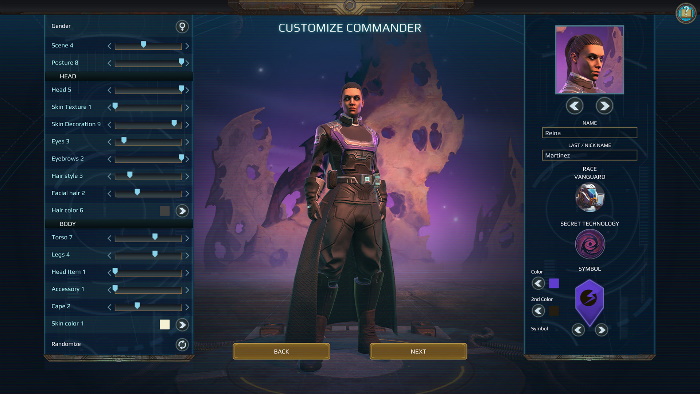 Disclaimer
This Age of Wonders: Planetfall review is based on a PlayStation 4 copy provided by Paradox Interactive.

Atelier Ryza: Ever Darkness & the Secret Hideout Out This Year