Gravity Duck from Ratalaika Games and Woblyware is a 2D platformer in which you control gravity to beat each stage. Learn more in our Gravity Duck review!


This is a double review for Gravity Duck. EdEN and Ceidz played the game, and this review presents what they both had to say.

In Gravity Duck you take control of a yellow duck with a large beak which, thanks to the help of a large stone head, gains the power to switch up gravity. The duck won’t be able to jump or fly, so you’ll be switching the gravity to complete each of the platforming levels you will play. Your goal is to collect the golden egg on the level to beat that stage so that you can move on to the next area… and that’s about it! There are 140 levels split between 4 different chapters, with each chapter falling under an overall theme. 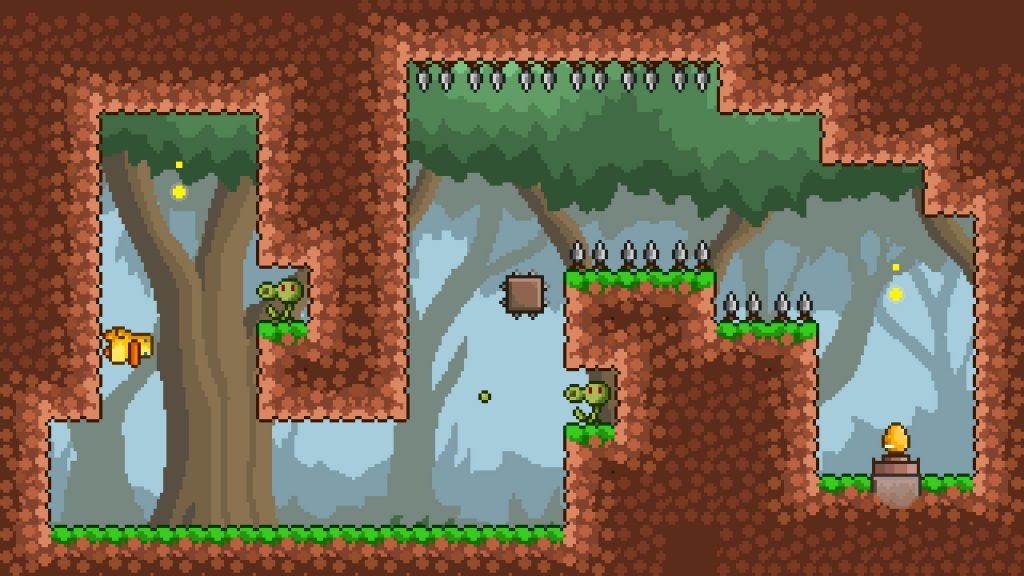 Due to the game’s overall simplicity, there aren’t many things for you to worry about other than moving the duck with the left analog stick or the D-Pad, pressing the X button, which you’d usually use to jump, to flip gravity. To be able to collect the golden egg, the duck will need to be facing in the same direction that the egg is located, so if the egg is upside-down, then the duck will need to be upside-down. There are also gravity wells which are marked by a yellow energy thing with a small yellow dot rotating around it. The rotating dot is key since when flipping gravity, the duck will be sent in the direction the dot is pointing when the duck touches the gravity well. 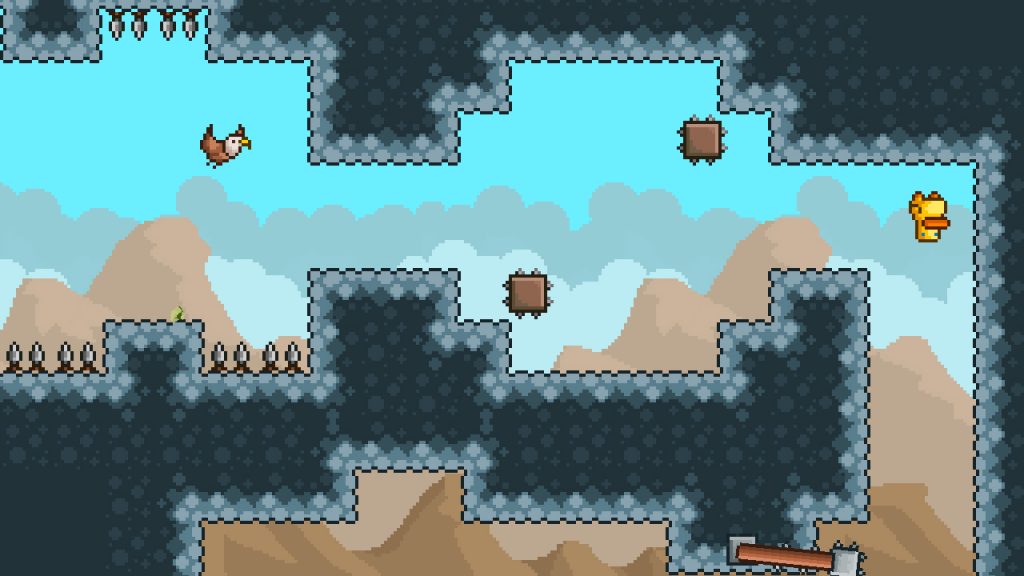 Ratalaika Games has gotten us used to expect a full trophy list with a Platinum trophy for the games it releases on PlayStation 4 and PlayStation Vita, with cross-buy support as well when there are two versions of the game, and Gravity Duck is not the exception. As for what you need to do to get that Platinum trophy for your collection, there is a trophy for dying (which is named Fried Chicken), as well as for collecting 10, 20, 30, and 50 golden eggs, for meeting some of the enemies you’ll have to avoid, and for finishing the forest set of levels. They’re all gold trophies, which is going to make trophy hunters very happy since you can get all of them in around 20-30 minutes depending on your experience with 2D platformers. 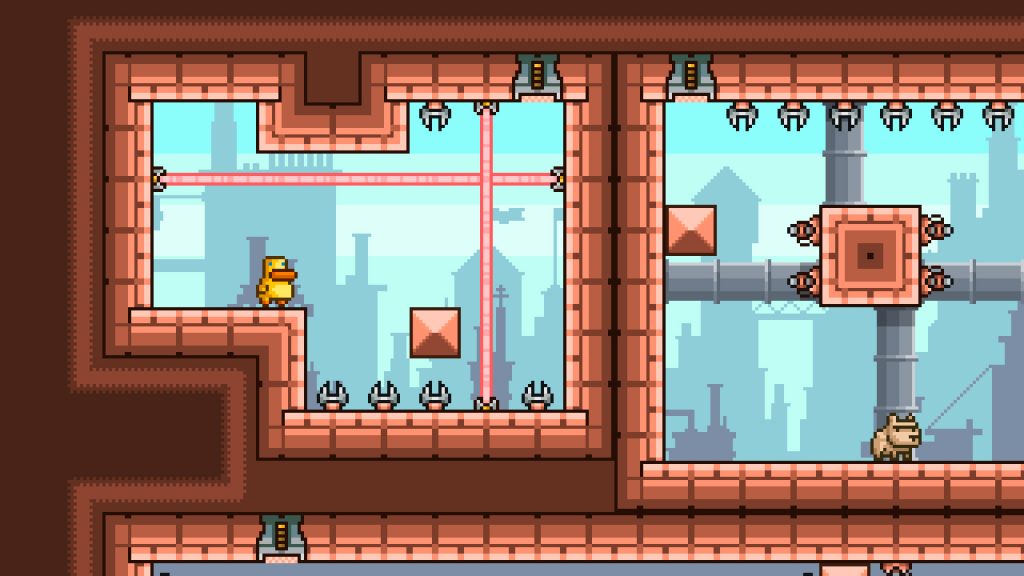 As EdEN has mentioned, this is a 2D platformer in which you’re going to take on small, almost bite-sized levels that you can quickly complete in a few seconds. At first, things are going to be very easy since stages are never too big and the layout of each stage will be easy to navigate, but then hazards are introduced that you will need to avoid. You’ll find spikes that are located on the floors, walls, and ceilings of the level, followed by moving blocks that also have smaller but just as deadly spikes! And there are also lasers, fire pillars, moving walls with spikes, and more! 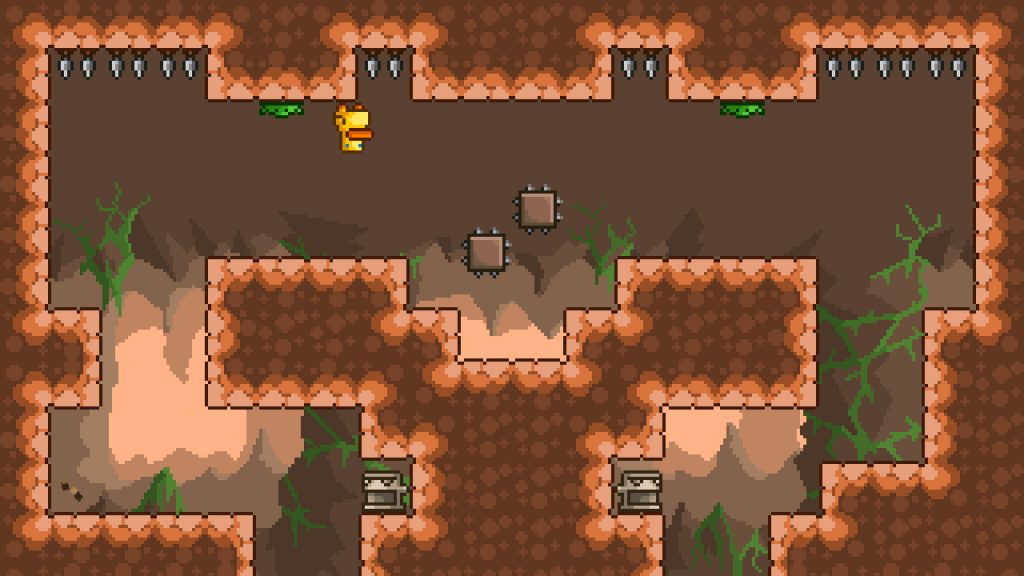 On top of the hazards I’ve mentioned, there will also be enemies that you’ll also have to avoid, with things such as caterpillars or plants – that are very similar to the Plants vs. Zombies plants. A single hit is all it’s going to take to kill the little yellow duck, but the good news is that when you die – which is going to happen a lot in this one since everything you touch can kill you! -, you will respawn right away at the start of the level so that you can try again. Every mistake you make will allow you to learn more about the game and how to best complete a particular level, so even when you die, you’re actually making some progress. 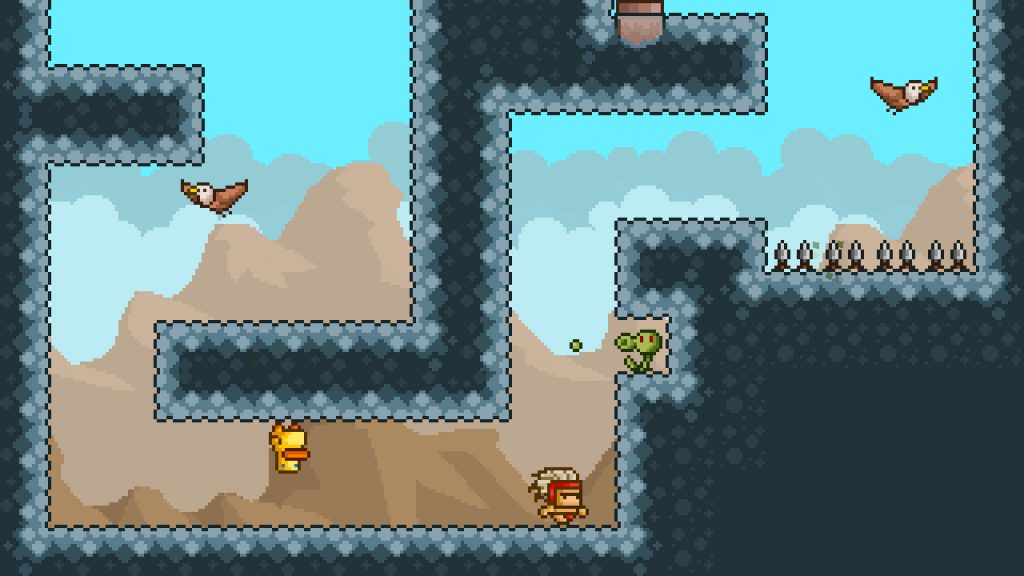 The game is very easy to pick up and play thank to its 2D platforming nature, and it plays just as great on PlayStation Vita as it does on PlayStation 4, except for the expected slowdown when playing on PlayStation Vita and you complete the requirements for unlocking a trophy, as this will pause all of the action while the trophy pops in the corner of your screen. Other than that, I didn’t run into any issues, and the framerate help up while playing levels in the different grouped themes. 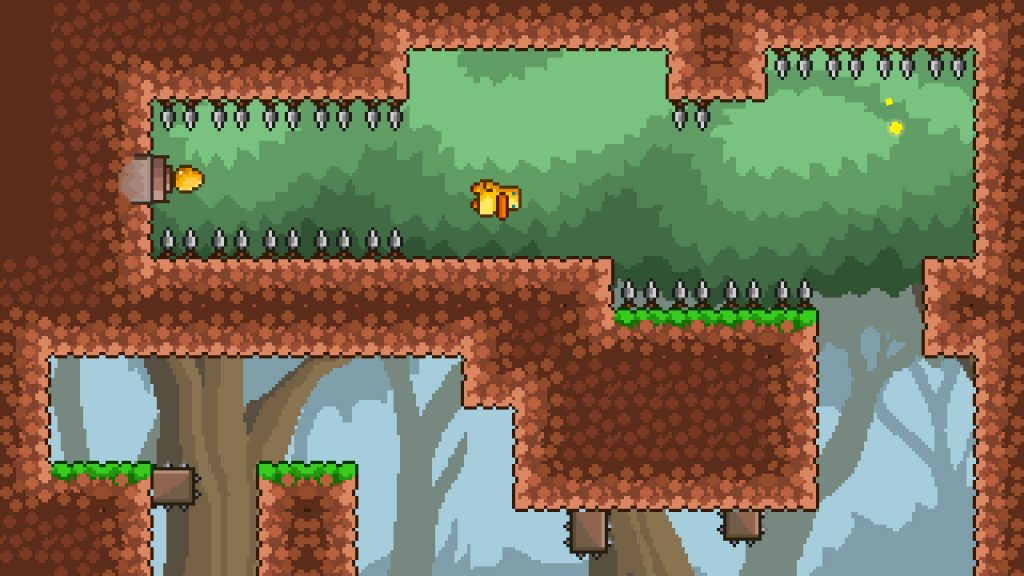 Gravity Duck is a fun 2D platformer on PlayStation 4 and PlayStation Vita with Cross-Buy support, giving trophy hunters two Platinum trophies for only $4.99. The game has a lot of stages to complete, and it will be an entertaining experience from start to finish at a budget price.

Disclaimer
This Gravity Duck review is based on a PlayStation 4 copy provided by Ratalaika Games.