Devespresso Games and Headup Games have launched Vambrace: Cold Souls, a challenging and great-looking adventure that will have you exploring dangerous locations as you try to help everyone survive under a new reality. The King of Shades has cursed the aptly named city of Icenaire, which is why the land is forever frozen. On top of this, the dead have risen from their graves as deadly wraiths under the command of the King of Shades. Completely overpowered, the living must regroup. Enter Everlia Lyric, bearer of the Aetherbrace, the only human who can once again enter the cursed city. 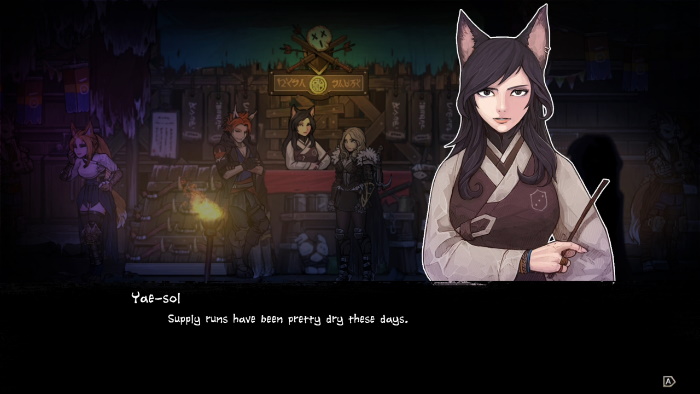 Let’s get the first thing on your mind out of the way: yes, it does remind me of Darkest Dungeon. Yes, it does its own thing and manages to stand out as its own thing. As soon as the initial loading screen disappears, Vambrace: Cold Souls will throw you into a short tutorial to teach you the basics. When you on the field you’ll be able to move your character left or right with the left analog stick. You will have a command box on the bottom left of the screen that will show you what you can do to interact with your current area. There will also be a command box located on the bottom right that will show your inventory, bio, codex, and map, which you can access with the D-Pad.

As expected, the inventory will show you the items that your team is carrying. You need to pay attention to the scale icon when checking out your inventory, as it will show you the total capacity you have, as well as how much all of the items you have with your weight. If you go over the limit, then your team will suffer from the overweight debuff. Your inventory is split into categories that showcase items of the same type, making it easier for you to find what you need. There are some items called relics, which you can equip to boost your characters’ stats or to upgrade your skills – characters might also be able to equip some of the quest items. The map will give you an idea of the area you’re located in, where you’re going, and where you’ll end up fighting enemies.

The bio allows you to check stats, skills, status effects, and equipped relics for each of your party members. The heart icon represents health, while the flame icon is for their vigor. The sword is for their prowess when fighting. The lockpick represents a character’s scavenging ability. The stars are for merchantry, and represent how good a character is at negotiating with merchants. The eye icon is for awareness, which lets you know if a character is adept at spotting traps – an important ability since traps can do massive damage. The tent icon is for overwatch, which is for how good a character is at taking care of the party when in a camp – more on that in a bit. You should also make use of the formation button so that you can rearrange the order of your party members to make the most of their skills and abilities. 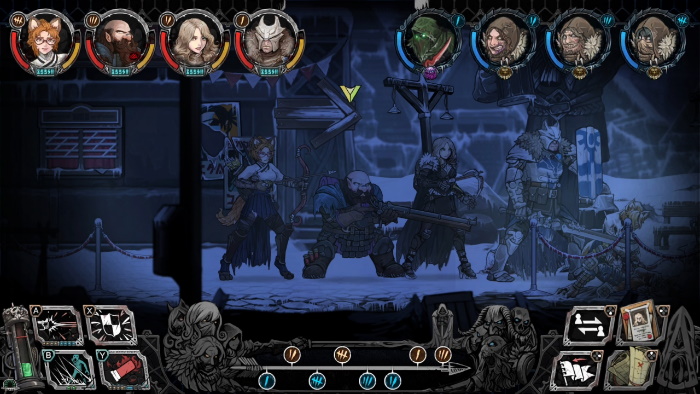 Camps will show up at random spots as you explore each area. They’re very important since Vambrace: Cold Souls is a challenging adventure, so you need to be aware at all times of how your team members are doing, or else you might find that they’re too weak to survive. Camps will allow you to recover your party members’ health or aid in them recovering their vigor. You will also find a camp right before a boss fight, which is the game’s way of letting you know you should get ready for danger.

Your party of four can be assembled from the available races and classes, allowing you to find a balanced team to boost your odds of survival. As you keep an eye on your vigor – it goes down with every new room you visit, and if it runs out then you’re done for -, you should form a party with characters that complement each other, with classes that have an affinity for having a higher stat above other classes so that you can mix and match as needed. As long as one character has a high number in one of the stats you need for your party – be that overwatch, awareness, lockpick, etc. -, then the whole party will benefit from what that character has to offer.

Heroine Everlia Lyric, who wields the vambrace that gives the game its name, must always be in your party, which is not a bad thing since she packs a punch, has solid stats, and useful skills. You do need to protect her since if her vigor or hit points reach zero, you will have to leave the dungeon you’re exploring. Since potential party members are completely randomized, you won’t always be able to select the right character class you want for your party, but having a full party is always a must. 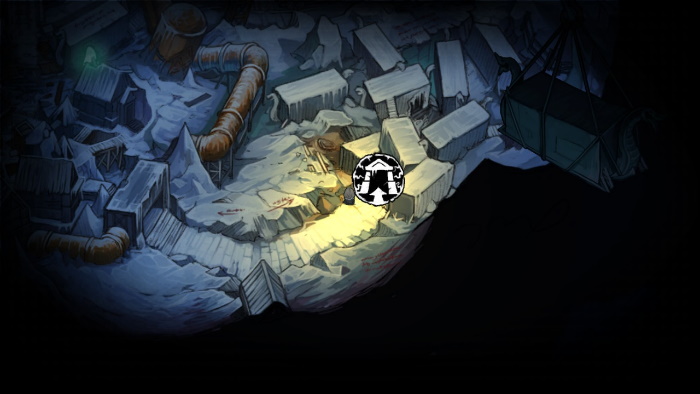 You will find character classes such as the Dragoon, a powerful ally that can deal a good amount of damage and use his special skill to deal a bit of damage to several enemies at once; the Fusilier, a ranged attacker that can deal damage to all enemies in the group, no matter where they’re positioned; the Celestine, a character that can cast a protective shield while dealing some good damage; or the Shadowmancer, who can help your party avoid some traps, as well as the chance to poison enemies. These are not all of the classes, but they will give you a good idea of what you can expect for your party.

As you fight, you can use your characters’ normal default skills, as well as some special skills that might first need to be charged up. Regular attacks might not always hit your opponents, but at least the same applies to their attacks, so you might get lucky and survive what would have otherwise been a deadly blow. Party members will have short, middle, and long-range attacks and these will, in turn, be used to target enemies at close, middle, and long-range from your party, depending on their placement during a fight.

Something to consider during battle is that while defeating enemies as quickly as possible is usually a good strategy, sometimes you should see if blocking is a viable option. Blocking with a character will cost you one vigor point, but you could end up blocking all damage from that attack, getting to live to fight for another round. Moving your party members to change their position is also a viable option if you know what type of enemy you’re up against. If one of your party members is considerably injured, then moving that adventurer to the back might give you a chance to heal any wounds before it is too late. 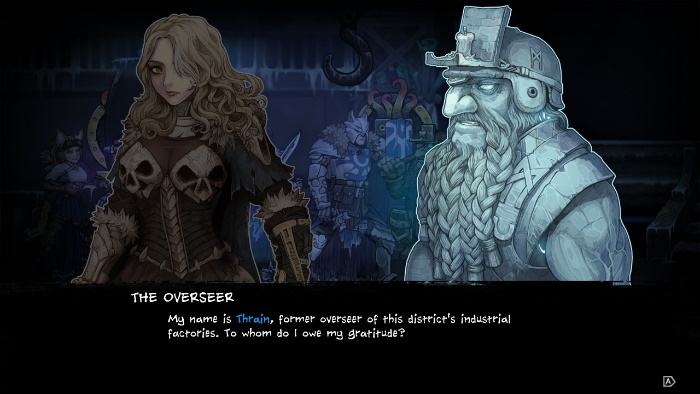 As you explore each area, you need to be aware of terror and how your Geistometer will inform you about it. Rested at a camp to recover your health and vigor? Then terror will go up. Explored a room? Then terror will go up. Entered a room that has a special effect that raises terror? Well, would you look at that… terror will go up! When terror is too high from all of this, a green fog will envelop the area, and every single room you visit will have you fighting a back-from-the-dead otherworldly group of enemies. Oh, and you won’t be able to heal in battle. Good luck!

Crafting is going to be an important element in Vambrace. The more you explore, the better your odds of finding materials for you to craft new equipment that can boost your stats, opening the door for longer expedition runs, since the better your health and vigor stats, the more you’ll be able to explore, and the better you’ll fare in the many battles you will have to take on. Crafting new items and taking enough healing items with you to explore so that you can make good use of them at a camp will go a long way.

Vambrace features an in-game achievements system that will reward you with souvenirs and some gorgeous artwork from the game. You’ll start with one already unlocked, but the rest you’ll need to obtain by completing different objectives for which you won’t have anything to go by other than a simple clue. As to not spoil things, I’ll leave it up to you to follow the clues and unlock the achievements. I will mention that there is a set of achievements that will unlock as you complete each of the game’s chapters, as well as a trio that will depend on how you decided to act during your adventure – dark, light, or right around the middle. 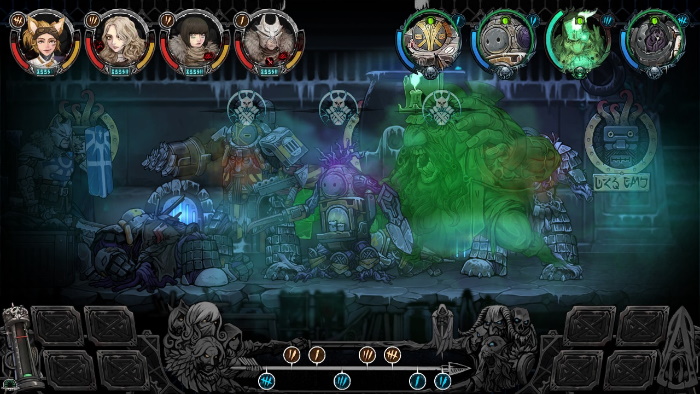 Vambrace: Cold Soul is a challenging 2D adventure set in a frozen world that has seen better days. If you like the challenge of Darkest Dungeon and are looking for a new adventure that feels similar but also does its own thing, it’s art style will certainly grab your attention, and its roguelike elements, challenging exploration, and a solid variety of character classes will keep you coming back for more. 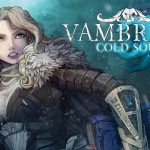 Disclaimer
This Vambrace: Cold Soul review is based on a Nintendo Switch copy provided by Headup Games.