Super Mutant Alien Assault is an entertaining and fast-paced 2D action game that can be played solo or in local co-op, with plenty of unlockables as you play through deadly single-screen levels. The game draws from a big pool of platforming elements to randomly create levels for you to play, which means that each run is going to be different. You won’t be able to learn a level’s layout, what enemies you’ll be fighting, and what weapons you’ll be using, which keeps the experience feeling fresh and the challenge going strong. 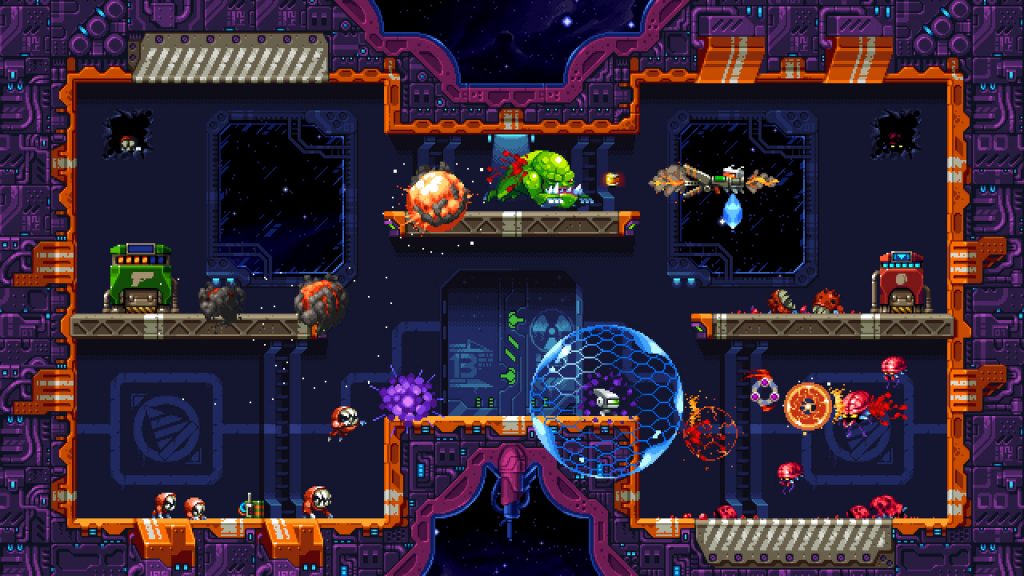 What I liked about the game was the vibrant 2D retro art style – it’s polished, and the details are great. The music itself was not bad. But the one thing I was not expecting at first was the single-screen gameplay and how hectic things are. Once you’ve killed everything on the screen, you are automatically transported to another level to rinse and repeat until you reach a boss level.  As you play each level, you will be completing different objectives. Along with clearing out the entire room, you’ll be defusing overheated hardware, teleporting around the stage. 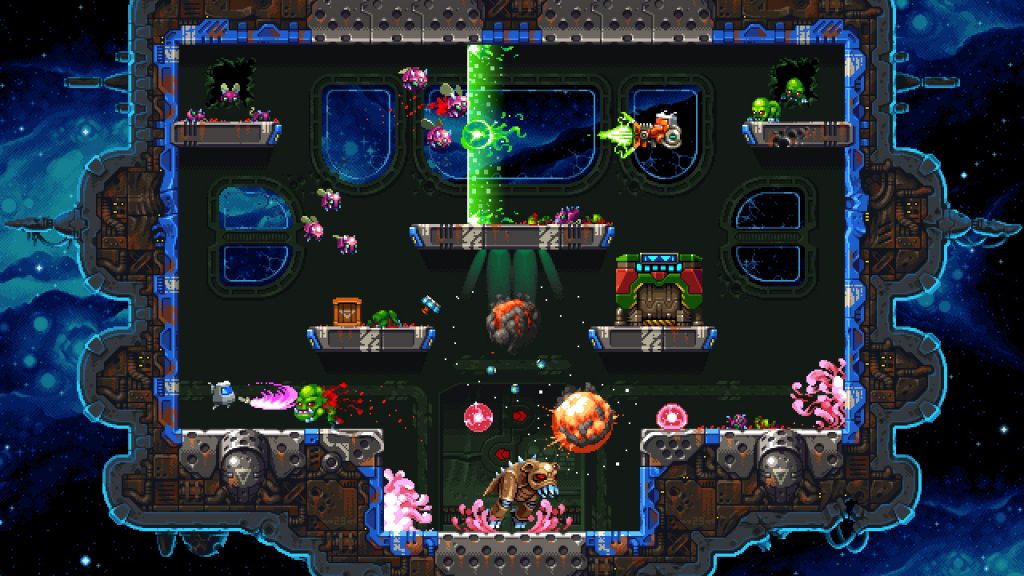 Weapons only have a limited amount of ammo, but you can get another loadout from the green vending machines things you can interact with by pressing the A button. There are also going to be some vending machines that will be white, which you can interact with to heal your health when it goes too low. The weapons you’re going to get during each run are going to different, so it’s a roll of the dice since you might end up getting a set of weapons that are not bad per se but not as useful for the situation at hand. 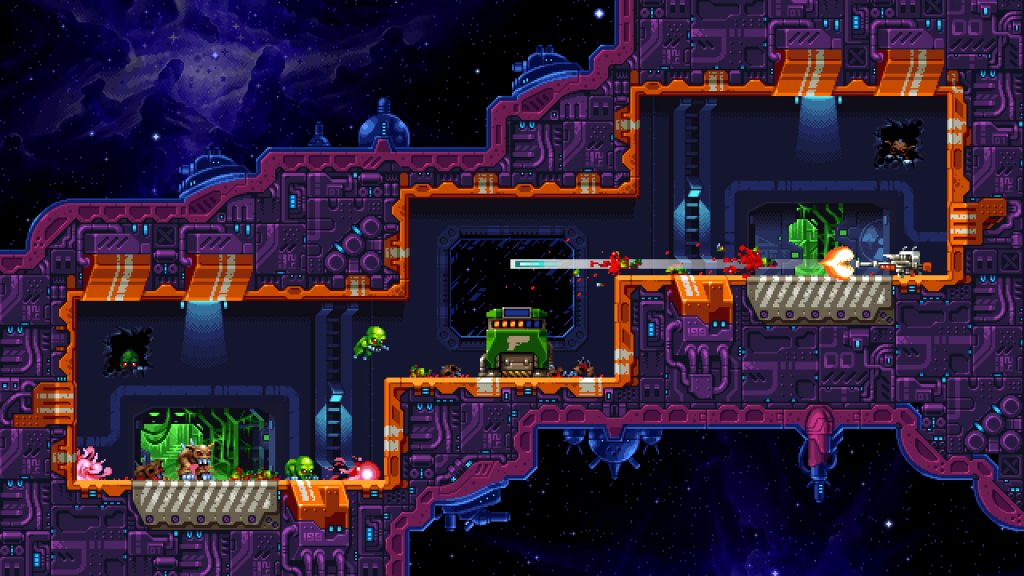 You do have a revolver that hardly makes an impact on enemies, but you can get a huge rocket launch that can completely obliterate anything that moves. You also have access to powerful weapons such as grenades that can instantly kill anything that is near them when they go boom. Run out of ammo? Then you’re back to the primary revolver weapon which is not going to be dealing a lot of damage, but at least it has unlimited ammo, so you’ll always have something to attack with. Because of this, you better make every shot count with the other weapons! 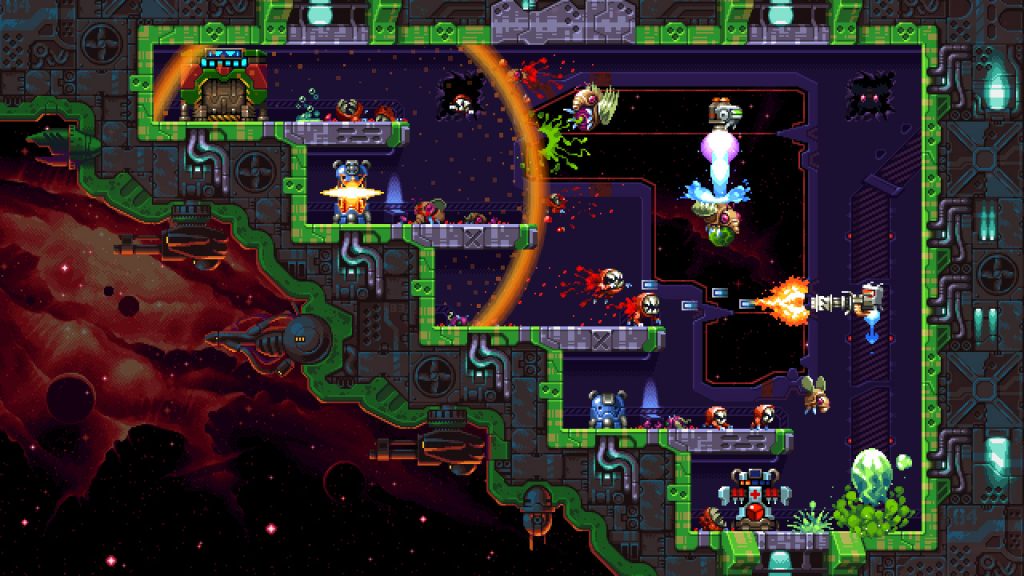 The levels do get harder the further you progress in the game, and some abilities can be found across the levels split across three separate galaxies. It’s difficult to say what abilities you will get in each level as they are random, so you won’t know how things are going to pan out. In some levels, there is also a radioactive element that makes enemies pop up even bigger and deadlier, so damaging that radioactive contraption is of the utmost importance or else you will have a hard time killing everything. 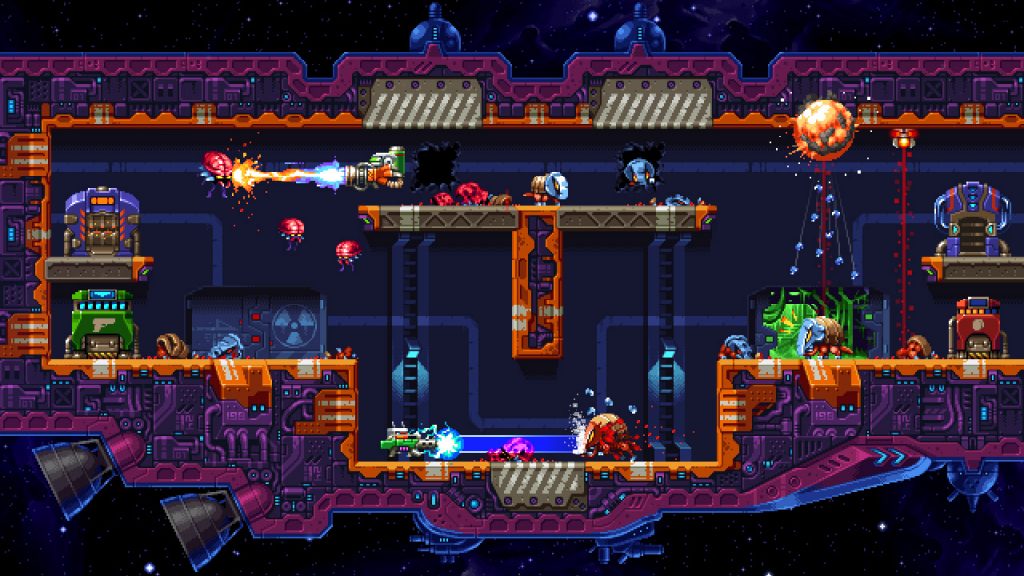 If the game is challenging when playing on your own, then you can make good use of the local co-op option to have family or friends join you in the fight. The only downside to local co-op is that if one of you dies, the other can’t revive that player, so the surviving player would have to carry on with an AI instead of getting a game over, which is not going to be ideal for all players involved. 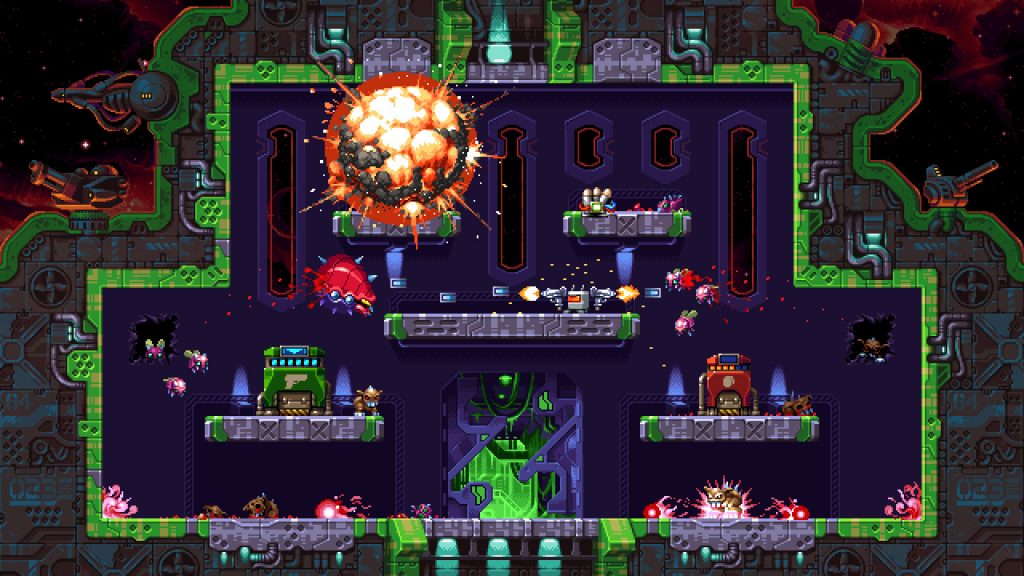 Super Mutant Alien Assault is a fun game that feels at home on the Nintendo Switch. Despite only having three galaxies with 12 levels in total, since the game’s levels are randomly generated, you’re going to have a lot of content to play as you do run after run in this procedurally generated 2D action release. There is certainly a lot of replay value in this one, and it’s available for only $9.99. 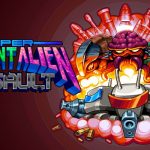 Disclaimer
This Super Mutant Alien Assault review is based on a Nintendo Switch copy provided by Fellow Travellers.