Third-person on-rails shooter Space Harrier was originally released as an arcade game back in 1985, revolutionizing arcade gaming thanks to its pseudo-3D presentation, and how the sit-down arcade cabinet (the deluxe) would tilt around as you controlled Harrier, making for a very immersive experience. The game’s story setup is rather basic, which is to be expected from an arcade game that released over 30 years ago. You play as the titular Harrier and use his jetpack and laser cannon to shoot at anything that moves, and any obstacle in your way, as you go through the Fantasy Zone to save the land. The end. 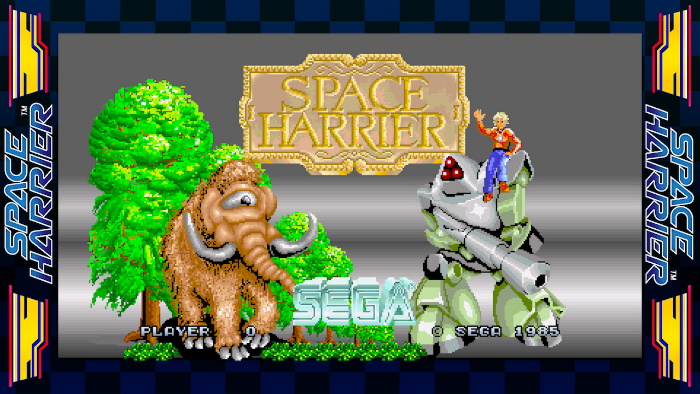 The controls for this arcade game are easy to understand since you’ll be moving around with the left analog stick and shooting at enemies with the A button. If you want to use rapid-fire, you can do so by pressing the B, L, R, ZL, or ZR buttons. Speaking of rapid-fire, you can select between three different fire speeds. If you want to, you can invert how the joystick will behave, and configure the movement area of Harrier between three different options so that you can keep him within a specific range of the screen. The Nintendo Switch version also has HD Rumble support, and you can decide if you want to have it active or not. 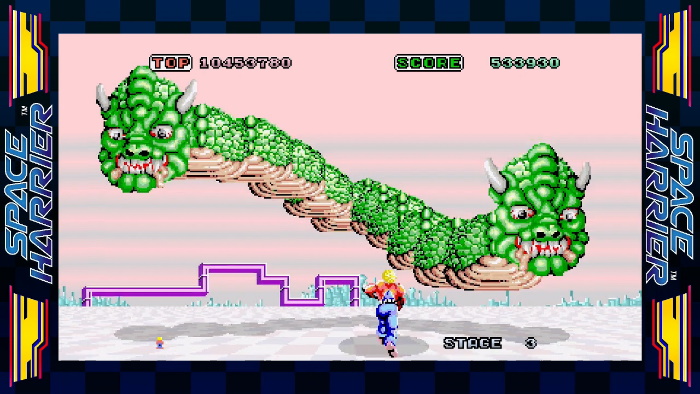 Each of the stages you visit will have a different color for the floor below you, a different background in the distance, and start to change things around by adding new obstacles and hazards, as well as some new enemies here and there. Bushes and rocks will be replaced by giant mushrooms, a deadly polygonal shape, and solid towers that will kill you if you’re not careful and end up crashing into them. Enemies will include alien spaceships, giant insects, colorful spheres, giant stone heads, mighty dragons, giant Cyclops mammoths, and more. A single hit is all it takes to kill you, so you need to be very careful since flying around all over the place is a great way of getting yourself killed. 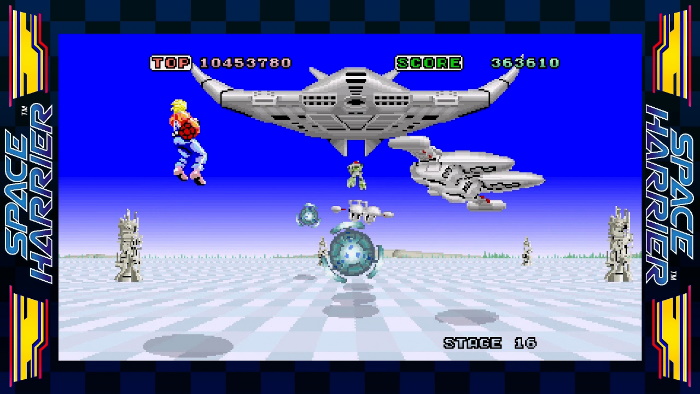 Along with the regular levels and their end-of-stage short boss battles, the game also includes a pair of bonus stages that serve as a nice way to take a little break from all of the action. You’ll get to ride Uriah, a creature that will remind old-school gamers of Falkor from The Neverending Story. Instead of avoiding all obstacles as you’d usually do in other levels, for the bonus stages you will ride Uriah as you make a point of crashing into as many obstacles as possible since the creature is invincible. At the end of a bonus stage, you will be rewarded with bonus points for each of the obstacles you destroyed. 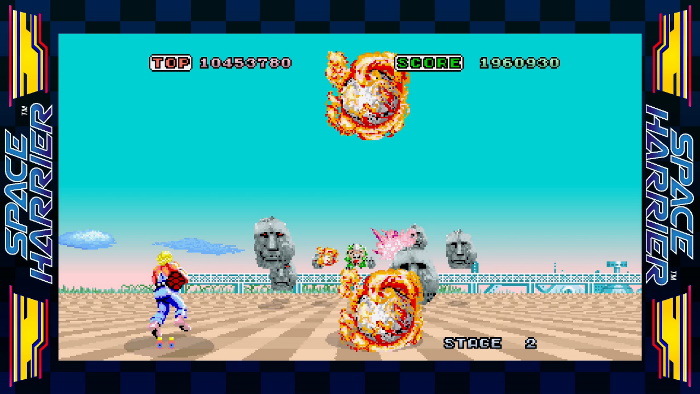 And while this release includes the original mode that will allow you to experience Space Harrier just as it was presented back in the day in arcades all over the world, there is also an extra mode for you to try: Komainu Barrier Attack! What this does is add a pair of Komainu – one to the left and one to the right. They will grant you a special barrier to defend from obstacles by shielding you from being hit, so that you can go right through it and continue with your adventure. The Komainu will not protect you from enemy fire, so don’t think you can just let go of the analog stick and shoot away, or else you will end up dead in seconds! Oh, and if a Komainu is hit, the barrier will go down, and a single hit from an obstacle will kill you. 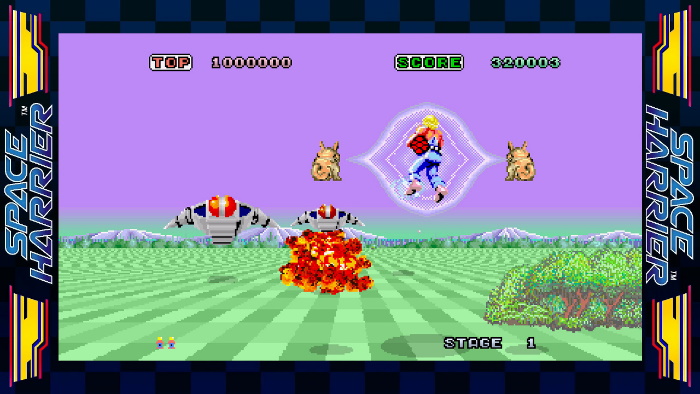 As for your configuration options for Space Harrier, you can select between four difficulty settings, select the number of lives you want to have (from 1 to 5), select if you will be getting an extra life when reaching 5,000,000 or 7,000,000 points, or if Time Trial will be activated. There are also display options for full screen, widescreen, arcade, arcade widescreen, vintage, and vintage widescreen. You can also apply a scan line filter, a smoothing filter, both, or none, as well as the cabinet background wallpaper, 12 differently colored backgrounds, or nothing at all. Oh, and there is a Joystick Mode in which you can use a single Joy-Con – which you’ll have to connect to the console as if it was being used as a detached single-player controller and use the gyroscope to move your character as if the Joy-Con was an arcade joystick. 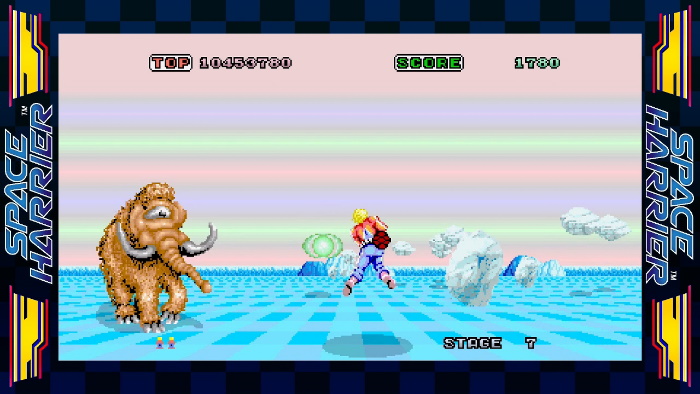 Space Harrier is a game that is very much part of video game history, introducing many elements that revolutionized arcade gaming more than 30 years ago. Video game designer Yu Suzuki did a stellar job in creating the original release, giving the world a game that had a nice 3D effect that would instantly grab the attention of anyone that walked by the cabinet. 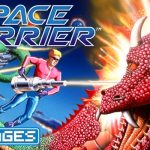 Disclaimer
This SEGA AGES Space Harrier review is based on a Nintendo Switch copy provided by SEGA.

Milkmaid of the Milky Way Out On Nintendo Switch