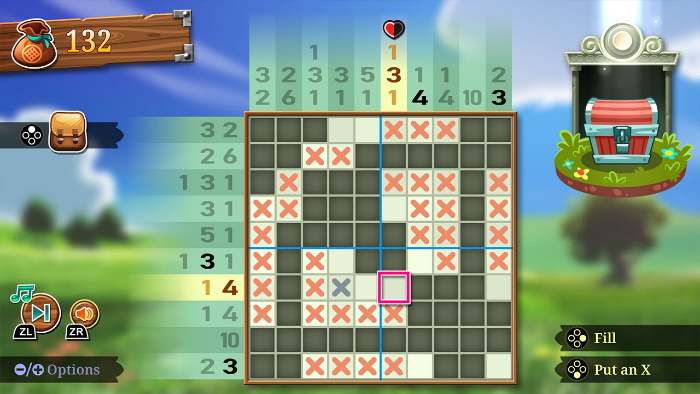 PictoQuest: The Cursed Grids takes place in Pictoria, a location packed with gorgeous and unique paintings that would bring in visitors from all over the world to marvel at their exquisiteness. Unfortunately, on a stormy night, an evil entity known as Moonface cast a spell that made the paintings start to vanish. It is now your job as the local hero to go after Moonface to recover all of the paintings that belong to Pictoria! You’ll take on this quest by playing as young knight in training Flöh, a young lad who loves apple pies and slashing monsters, or as Arvel, a warrior whose mom was one of the most famous painters in all of Pictoria.

If you’ve never played a nonograms game before, then you can click on the Tutorial section in the main menu before you start your adventure. The goal of each level is to reveal the hidden picture by filling in some of the squares on the grid by taking note of the numbers for its rows and columns. So if you have a 5×5 grid and one of the rows has the number five, that means that all squares for that row must be filled as they are part of the image you’re trying to reveal. If, on the other hand, for a 5×5 grid you have a three and a one in a column, that means there are there squares in a row that must be filled up, followed by a square that must be left blank, and then a square that must be filled up on its own. 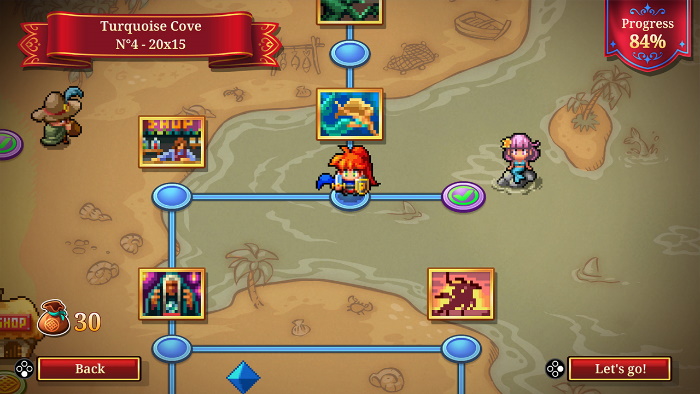 To make things easier on you, you can mark the squares that you believe must not be filled up – as would be the case for, say, a row with the number zero -, so that you don’t end up accidentally making a mistake as you fill up other squares in the grid. Using this ability is key since it will prove to be a valuable visual cue that will help you identify the spots in some of the rows and columns where, for example, four blocks in a row would not fit since that sector has three columns with zeroes, and that means there would be no space for the four blocks to be filled in.

Before you take on a level, you will get to know how big its grid is going to be, and that is a good way of telling how difficult a level will end up being. The first set of puzzles will be presented in 5×5 grids so that you can get a chance to get the hang of things as you complete them. Without spoiling too many of the levels you will play, for this first round, one of the puzzles is going to be of a coin, while two of the others will be of a letter and of something that is red and that usually helps to display a hero’s health. 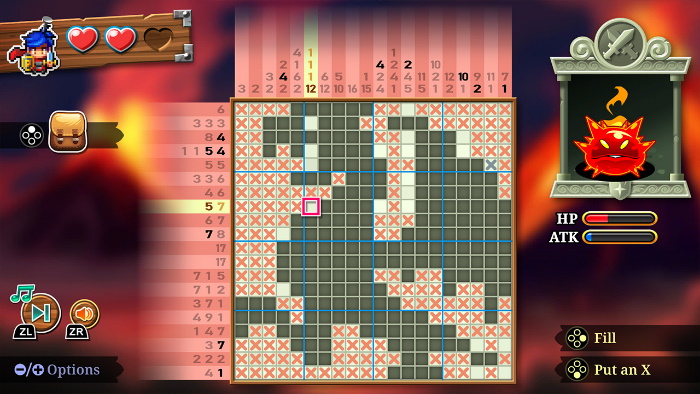 Every puzzle you complete will reward you with coins, which you can later use at the shop to purchase items to aid you on your adventure. You can, for instance, purchase a small potion that will heal some of your health, an extra hearth for your health bar, or perhaps you’d like a magical elemental orb that will aid you by freezing enemies for a moment, or revealing for a few seconds some of the squares you should fill up. If you need some extra coins, you can replay previous puzzles to add some extra gold to your bag. The items you can use in battle can be activated by pressing the X button and then selecting in the menu. 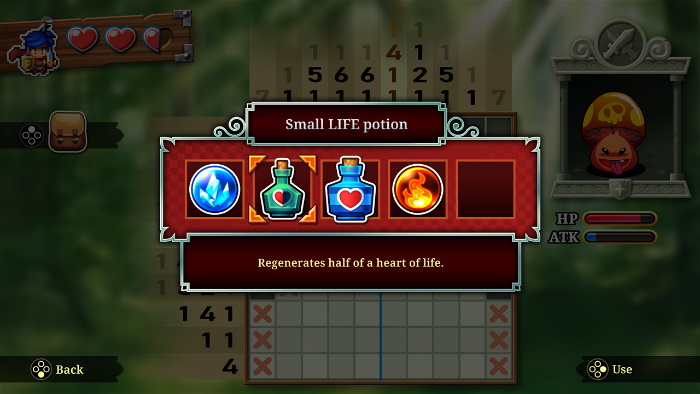 There will be some NPC you can interact with here and there, and they will present you with a challenge puzzle in which you must solve a specific grid under certain conditions. The first challenge will be of the aforementioned red item, and the requirement will be that you complete the puzzle before time runs out. There is nothing to worry since this is the first challenge in the game, and the timer is going to be rather generous – not to mention you’re trying to solve a puzzle you’ve already recently completed.

As you progress further in the game, you will start to run into enemies, and they will need to be attacked by filling in the right squares that will help you solve the puzzle. If you make a mistake, they will attack your hero, dealing some damage to its health bar, which is located on the upper left corner of the screen. You’ll eventually run into groups of enemies, and when you’re battling them, you will need to cycle between enemies with the L and R buttons to keep them in check so that you are not defeated. If you don’t hurry up and complete a full row or column, the monster’s attack bar will fill up, and it will take a swing at you. There is a chance that the attack will miss, but you shouldn’t rely on that! 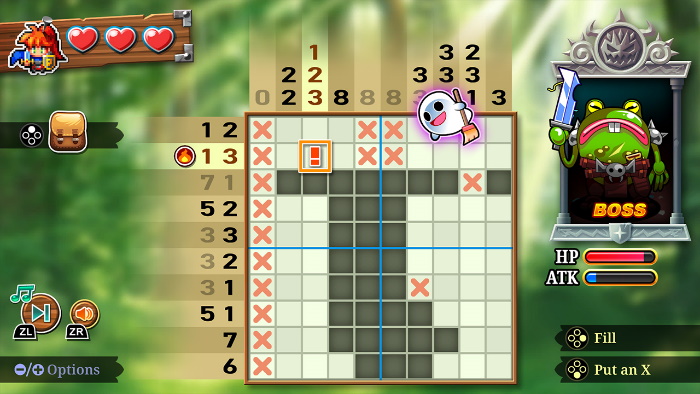 There are also boss battles thrown in, and they will challenge you to complete the puzzle faster than usual since their attack bar fills up faster than it does for regular enemies. On top of this, they might have a special attack they can use on the hero or on the grid to complicate things. Luckily every now and then one of the rows or columns will light up with as symbol (which also happens in regular puzzle stages), and this is your cue for completing that row or column to get the bonus represented by the symbol. This could include getting a free small potion or an elemental orb to reveal some of the squares you must fill up. 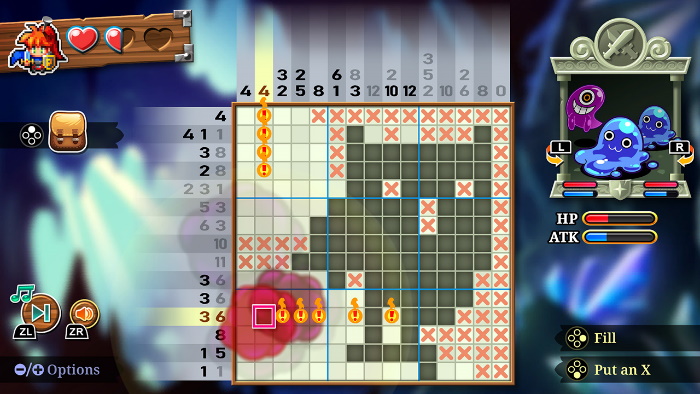 PictoQuest: The Cursed Grids is a fun game with nonograms to solve that come to life once you’ve completed a puzzle. The “your health bar is how many mistakes you can make, and you must pay attention to enemies’ attack bar so that they don’t deal damage to your hero” gameplay twist is a fun one, and it helps this one stand out from other entries in the genre. The game is available now on Nintendo Switch for $9.99, and it’s one that both those new to the genre and long-time fans will enjoy.

Disclaimer
This PictoQuest: The Cursed Grids review is based on a Nintendo Switch copy provided by NanoPiko.