Chroma Squad from Behold Studio and Plug In Digital is finally out on Nintendo Switch! Learn more about this tactical RPG in our Chroma Squad review!


The road for Chroma Squad to make it to Nintendo’s hybrid console began many years ago back in 2013 when Behold Studios started to work on what would become this homage to the old-school Super Sentai and Power Rangers, taking the project to Kickstarter in the same year to try and secure the funding needed to complete the project. It was released for PC, Mac, and Linux in 2015, first jumping to the Playstation 4 in 2017, before finally arriving on Nintendo Switch. There was at one point a dispute presented by Saban, owner of the Power Rangers franchise, which was settled by way of an agreement that granted Saban a royalty share on the project, which is why on the main title you see “Inspired by Saban’s Power Rangers.” 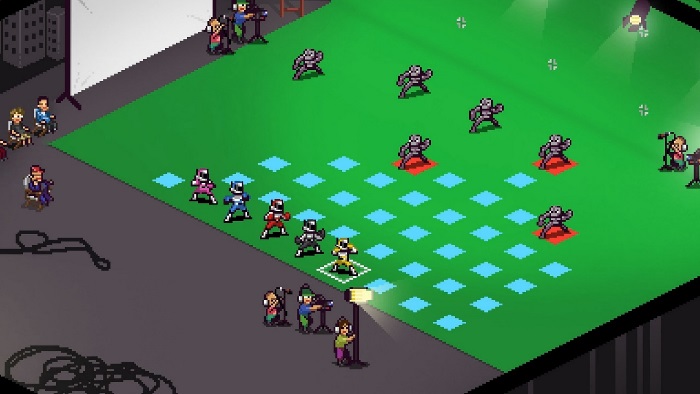 What is Chroma Squad? It’s a simulation/tactical RPG of sorts in which you control five stunt actors who have decided to quit their day jobs so that they can start their very own studio. One of the stunt actor’s uncle owns a nearby warehouse, so they decide to use this as their base of operations given its sheer size, and they’re even lucky enough to find out there is Cerebro unit from an old TV show in the warehouse, which is certainly going to look great in the new show they’re going to film!

The game offers four difficulty settings so that you can find the one that fits your playing style. There’s Casual for those of you that just want to sit back and enjoy the game’s story, allowing you to pick the items and studio upgrades you want. In Interesting you’ll get the normal tactical RPG experience without feeling overwhelmed. Then we have Challenging in which your abilities will be tested in full with a more significant challenge. The last one is Heroic which, as the name suggests, is only for veterans of the genre since enemies are considerably stronger and will pack a punch. 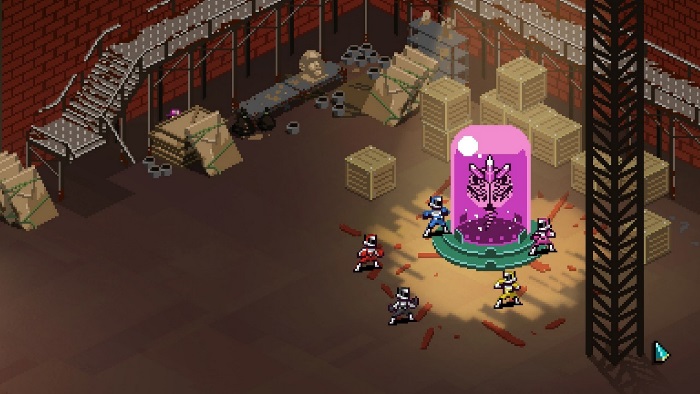 Chroma Squad will help you learn the basics by sending you straight into a short tutorial as soon as you start to play. The five stunt actors will be called into action on a large green screen stage where the first objective will be to defeat the enemy minions that have entered the scene. You’ll do this by moving a cursor with the left analog stick or the D-Pad to select a square to travel to so that you can then select a nearby enemy unit to attack it. If you press the X button, that character will instead pose and activate the Teamwork ability, which will allow them to boost allies to the yellow squares that are further away, thus allowing units to move some extra slots. Teamwork will also make it so that allies team up to attack enemies.

After you’ve completed the tutorial, you’ll get to name your new studio, as well as name each of the stunt actors that you’ll be hiring for your new show. Each of them has a specialty as well, with one being the leader, and the others specializing in assault, scout, assist and techie roles. The different stunts actors you can hire for your show will have different salaries as well as a variety of pros and cons to consider. One might, for example, have a +1 to movement while also having a 20% lower weapon attack stat, so you do need to keep these in mind! Another thing you can do is change the colors for each of the five stunt actors. While the default colors are the classic red, blue, yellow, black and punk, you can change these to white, gray, orange, brown, purple, and more, to customize your team. 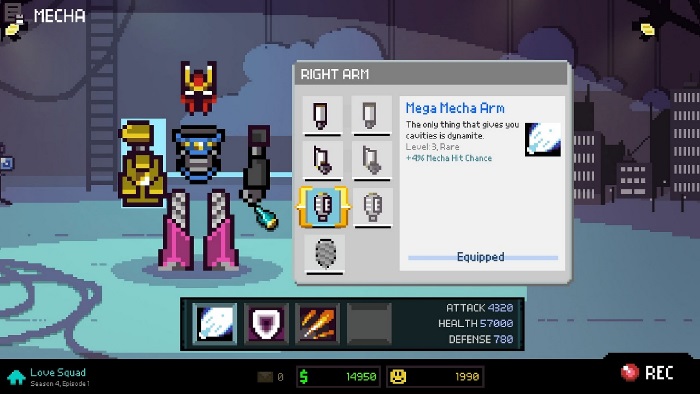 Once you’ve customized your team and saved, you should probably make good use of your starting funds to purchase some equipment for each team members at the shop to boost their attack, weapon, movement, health, skill regen, critical, dodge, and counter stats. You can also purchase upgrades for your studio, such as health care for all actors, a new camera, a new microphone, and even boost the size of your studio. There is also the option of unlocking new skills for your actors depending on the season you’re on, with all actors starting with one unlocked skill. Be careful not to spend too much money since for each episode you’ll have to cover the actors’ salaries, pay for marketing, and cover other miscellaneous expenses.

You can also try your hand at crafting items for your team to use. Each item has a set number of materials that you must have on you, so be sure to check what each item needs so that you can also craft rare materials from the things you collect while filming each episode. You can also try to recycle the items you are not equipping or the loot that you collect, and depending on the percentage shown, you will have an X% chance of actually getting some items from recycling. You can also buy material packs to get a random set of materials added to your stock. 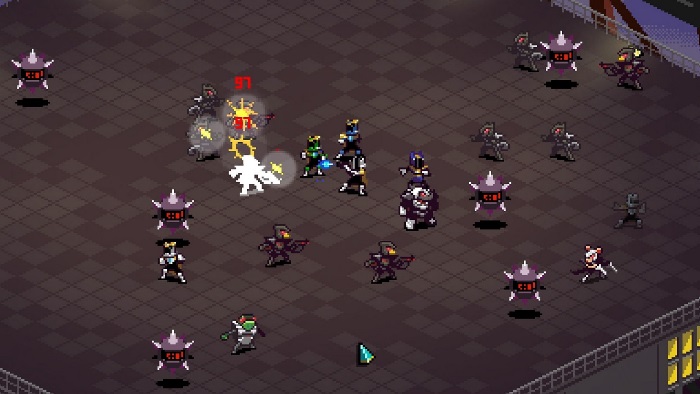 When you’re ready to start the process, press the X button to select the episode that will be recorded, as well as to check the director’s instructions for the set of objectives you should aim to complete. For example, the pilot episode you’ll film for the new show will ask that you perform three team acrobatics (activating teamwork so that other allies can be boosted for a bigger movement range), that all actors are maintained with health above 50%, that the boss monster is defeated with a finishing move (all allies surround the boss and activate teamwork), and that you defeat all minions before attacking the boss. Doing this will please your fans, increasing the number of people watching an episode and, therefore, boosting how much you revenue you earn from that episode. 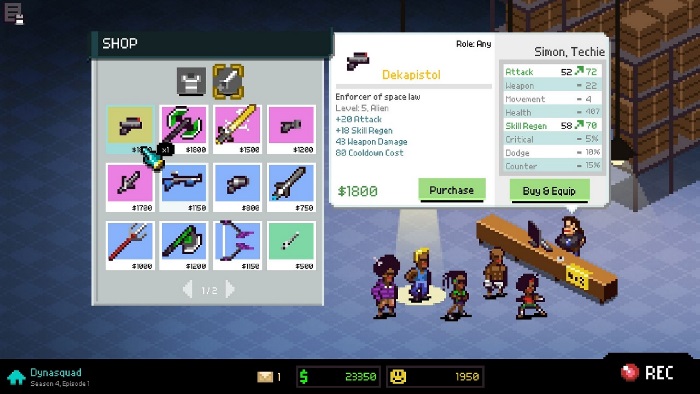 Chroma Squad is a very fun tactical RPG/sim game that feels right at home on Nintendo Switch. A short game this is not as you can expect dozens of hours of content to play as you move on to film new seasons, always aiming to please your fans so that you can keep doing what you love. The one complaint I would have for the game is that the font size is too small, which means you’ll need to sit closer to the TV screen when you’re playing with the Nintendo Switch in Docked mode. This is not a problem when enjoying the game in Tabletop or Portable mode since you’ll have the console’s screen relatively close to you, making it easier to read all the information the game presents to you. 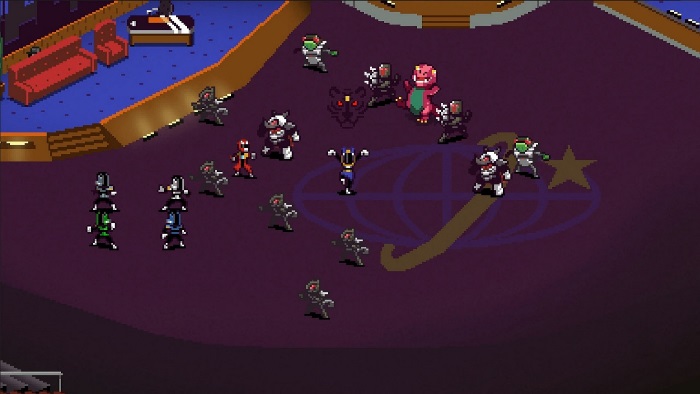 Disclaimer
This Chroma Squad is based on a Nintendo Switch copy provided by Plug In Digital.