A relic from another time wakes up in the current day with one focus: love. See how Larry deals with this in the modern age of technology in our Leisure Suit Larry: Wet Dreams Don’t Dry review!


Hey ladies, I’m back in business! My new adventure, Leisure Suit Larry – Wet Dreams Don’t Dry, takes me – whatever the route or twist of fate – from the end of the ’80s directly into the 21st century and wow, how the world has changed!

Features:
• Leisure Suit Larry is coming in the 21st century – and no, that’s not a typo
• Explore a lovingly designed, non-linear game world set in modern times with over 30 handdrawn locales
• Use “Timber”, the ingame app, along with an innovative dating mechanism to date women, consequently improve your score at Timber, and ultimately clear the way to get to Faith, the woman of your dreams
• Solve true-blue puzzles and interact with over 30 hand-drawn characters

Leisure Suit Larry: Wet Dreams Don’t Dry is new to console, but it released on PC late last year. Like it’s predecessors, this is a point and click adventure game, and unlike some of the sequels that have dropped since the original, this one feels like a worthy successor in the long-running franchise.

The game has Larry waking up in a dark lab. The last thing he remembers is the 1980’s, but once he exits the lab, he finds himself in the modern age, without having aged one bit. He enters the bar he used to spend most of his time at, and in the bathroom, he finds a prototype for the new Pi-phone from Prune. After returning it to the Prune Offices, Bill Jobs the CEO gives him his own Pi-Phone, and Larry starts using Timber to get his Timber score up so that he can date Bill Jobs’ assistant Faith who will only date people with a Timber score of over 90. 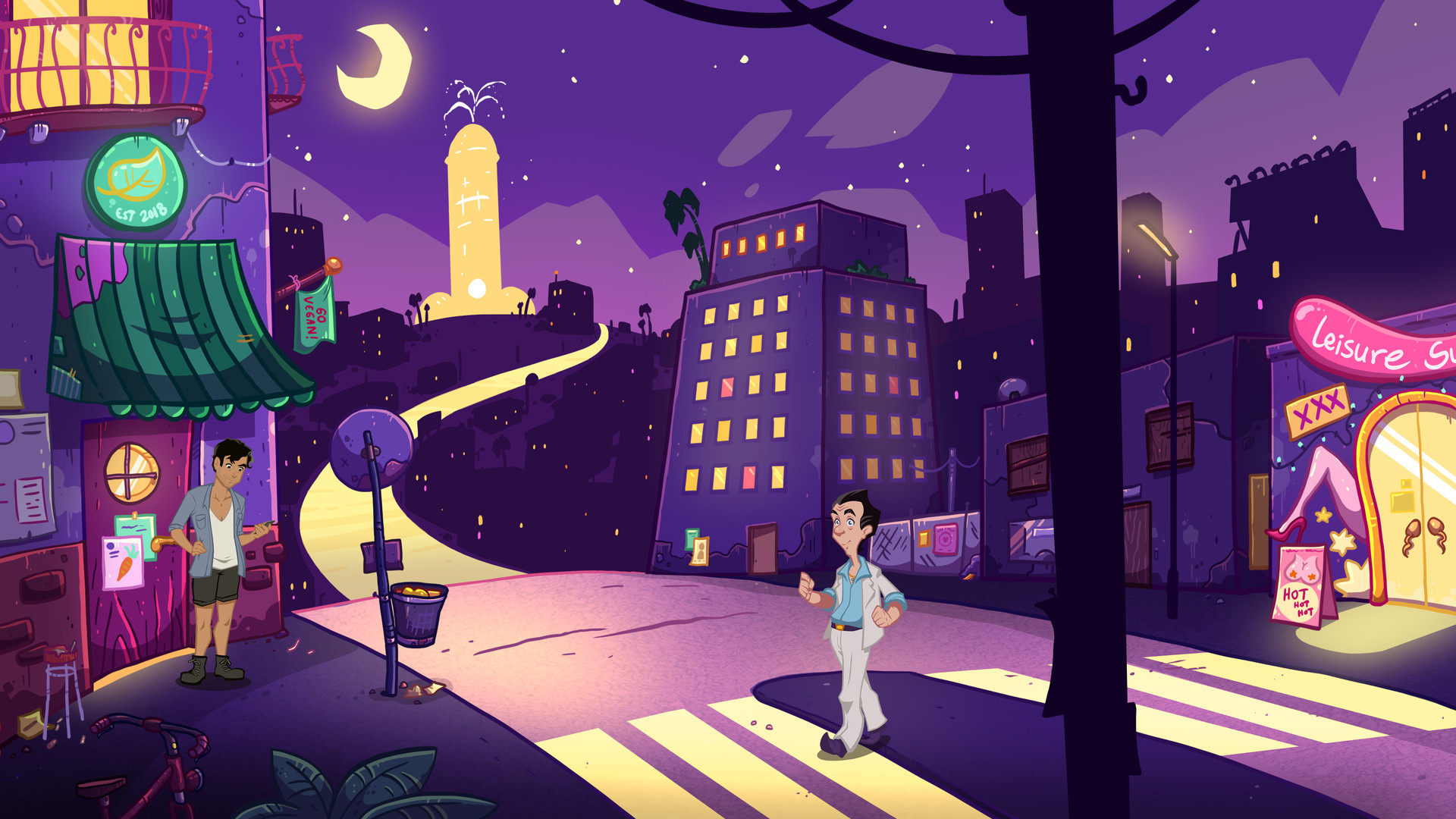 It’s an interesting premise for Leisure Suit Larry. In other hands, this could have gone down the wrong path. However, Larry comes off as a likable dummy, who’s unlucky in love. While he is 100% focused on scoring, I see him more as a tragic character who’s looking for a human connection by going at it the wrong way. Everything is very tongue and cheek. For instance, outside of Larry’s old apartment is a lush bush that has something in it, but you can’t make out what it is. In his old apartment, there are hedge trimmers you can use to trim the bush. This is the type of interactions you will see in the game, but I wouldn’t play the game around children. I definitely waited for my kids to go to bed! The game is funny, lampooning dating in the digital age quite well and has a ton of easter eggs and references to keep old school fans of adventure games happy as well.

With that out of the way, let’s talk about how the game plays. It is a callback to the old-school point and click adventure games, which have seen a bit of a resurgence over the past few years. The game gives you a quick tutorial, but it took me a bit of getting used to. You can control Larry with the left analog stick to move, while the right one is used to move the cursor around so that you can interact with an item, object or person. After that, Larry will simply move over and pick it up, interact with it, or talk to said person. You don’t need to move Larry around at all if you don’t want to, which felt a bit odd at first. You can also hold a button, and it will show you all the points of interaction on the screen, so that you don’t end up missing something, no matter how small. 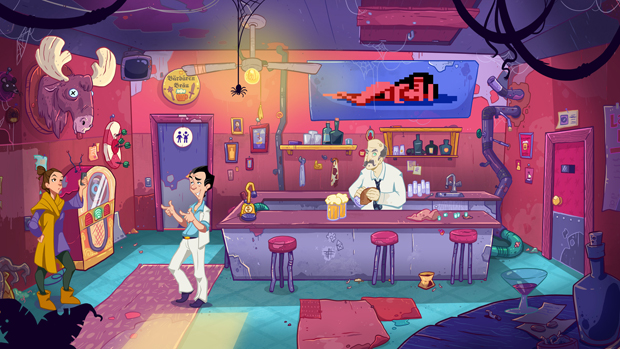 Most adventure games typically follow a pretty tight narrative, and you move from area to area picking up items and using them fairly quickly to progress. Larry is a bit different as you have one endgame goal and it’s a bit freeform on how you get there. pon getting his Timber app profile setup, Larry is initially matched with three potential dates. To get them to date you, you’ll need to help them solve their problems. There is no specific order on how to tackle this, leaving it kind of up to players to decide how they’ll handle things. If you feel you are stuck on one, you can work on one of the other quest lines. It’s nice as sometimes you can feel really stuck in regular adventure games.

The negative though is the item Management itself, as you are dealing with lots of quest lines, the number of items you carry can get up into the 20+ range regularly. It can get overwhelming trying to figure out which ones will work in what situations. The other thing I found, while the tutorial did tell you how to play, it left out how to combine items (an adventure gaming staple). I thought the game didn’t have it until I accidentally figured it out solving a situation. I wish they had gone over that.

Larry uses hand-drawn 2D artwork, and it works so well. One of my favorite things has been the many remasters on older adventure games, making them look like I thought they looked like if that makes sense. While this is a revival and not a remaster, it has the same effect. The game does have some homages to the original artwork – you’ll know it when you see it. The other thing that surprised me was how strong the voice work in the game was. Every cast member had a distinctive voice and sound – a great job.

The game took me around 10 hours to Platinum. I had different saves and went back to clear up a few missable trophies. Overall, it’s a fairly easy Platinum trophy to get. There is one trophy that made sense as a Steam achievement, but it doesn’t translate to a controller properly. I eventually figured it out, but I could see how some people might need to look it up in a trophy guide. 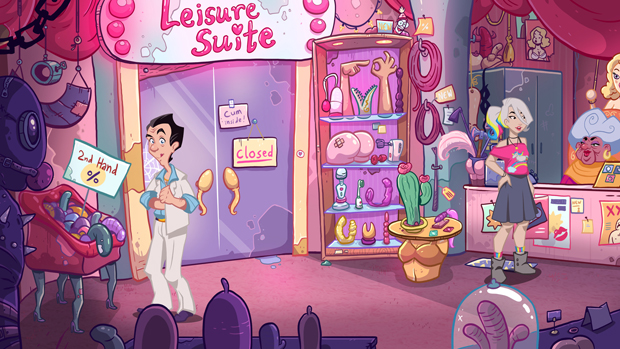 Final Thoughts
I’m a huge point and click adventure game fan and love the remaster and revivals. Leisure Suit Larry: Wet Dreams Don’t Dry does so many things right. It looks and sounds great, has a fun sense of humor, found a way to keep Larry being a likable character in this day and age as well. The inventory system can get difficult to manage, but that’s the tradeoff of having a more open form narrative, which I liked. This one is an easy recommendation from me. 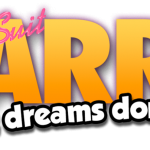 A solid revival for the Leisure Suit Larry franchise!