Skelly Selest from Digerati and Caiysware is a fast-paced run ‘n’ gun-athon on Nintendo Switch. Learn more about it in our Skelly Selest review!


In Skelly Selest, you take control of a Heavenly Keeper who has been tasked with defeating wave after wave of Hellion spawn. To do this, you will take it into the different game modes on offer. You can either take on a dungeon crawler roguelike in which you’ll clear room after room of enemies as you search for the big bad boss to defeat, destroying some mini-bosses in the process. There is also an arena-style game in which enemies come at you in waves from all over the screen, and you need to remain in high alert to be able to defeat them as fast as possible. 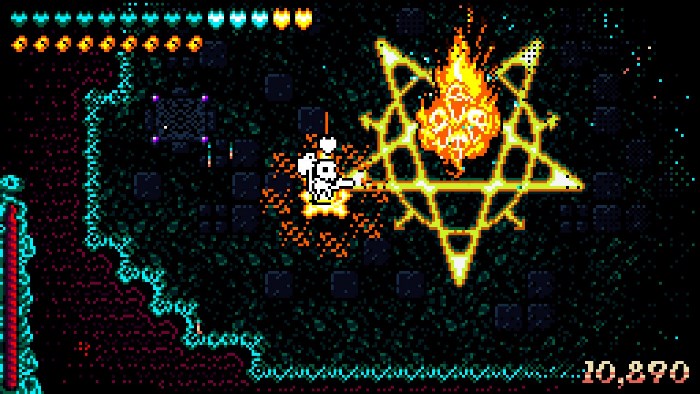 Before you go into the game proper, be sure to check the tutorial that the game kindly presents to you. You’ll learn to move around with the left analog stick or the D-Pad, and how pressing the Y button will allow you to dash out of harm’s way. Once you’re given a weapon, you’ll get to swing that with the B button. With a gun in your arsenal, you’ll be able to shoot projectiles with the A button. You can’t just shoot at everything as you please, since you have a limited ammo count that can max out at five. If you want to recover your ammo, then you are going to need to melee kill some enemies.

Something I recommend is that you go into the options and activate the right analog stick to work as your aiming cursor to better target enemies Since this changes the game into a twin-stick slash, shoot and dash, you’ll be able to use the gun with the ZR button and swing the axe with the ZL button, which I believe is the best option for a solid experience. The only issue you’re going to find is that you can’t really aim all around you since you are limited by eight-direction aiming, so do keep this in mind since sometimes enemies like to squeeze themselves into the spots at which you can’t attack and dish some damage while they’re at it. 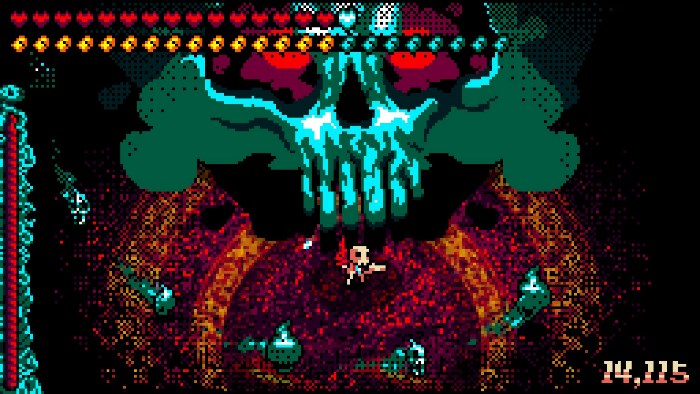 Killing enemies you reward you with points, and the more enemies you kill within a specific time window, the more your score multiplier will grow. If you want to aim at getting a high score, then you’re going to have to pay attention, be swift, and kill anything that moves as fast as you can. You might want to lure enemies near an exit so that you can quickly walk into the next room as spon as you destroy the last enemy in order to keep the combo going strong. 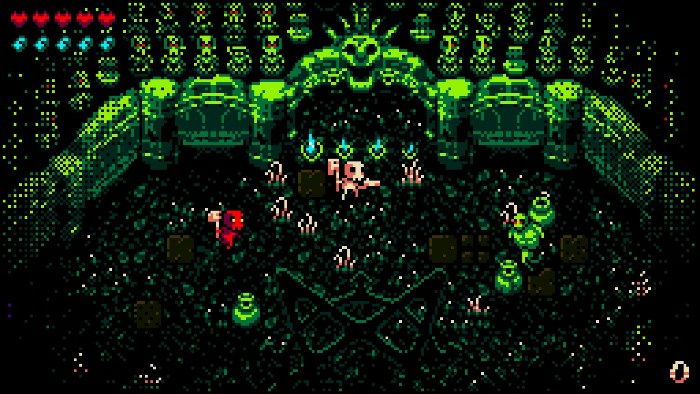 As you clear each room of all enemies, power-ups might show up inside of the areas you clear. They include things such as doubling your ammo reloading, boosting bullet damage but lowering its range of attack, one that adds a chance of either halving or doubling the damage you receive, or one that grants you a score boost when you die, to name a few examples. There are 40 power-ups to collect, so there’s certainly a nice variety to collect that will change how your run goes. You might also run into a store of sorts in one of the rooms. In here, you don’t pay with money, you pay with your health points. If you want to get something, pay attention to the number of partial or total hearts you will need to trade in for it, and ponder if it’s worth it or not.

Be sure to check out the Grimoire when you get a chance, as it contains a Bestiary in which every enemy you meet is registered, as well as letting you know how many of that enemy type you’ve defeated, an Itemography where the power-ups you get are registered, as well as a section that displays your stats for what you’ve managed to do in the different game mode options available for Skelly Selest. 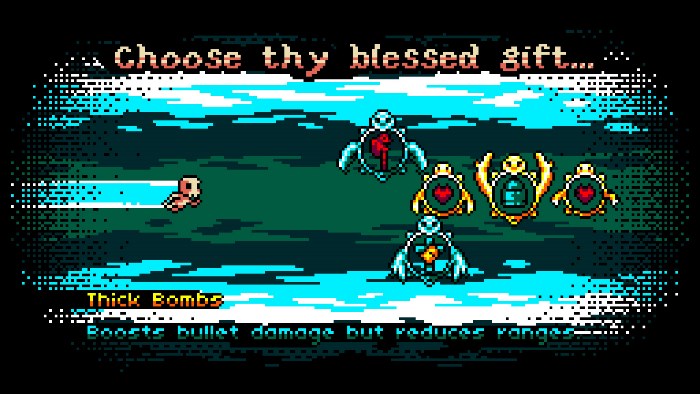 You can customize your experience in the options menu by making changes to the game’s visuals. You can change the floor decorations, minimize or remove the dither border effect, add some subtle or straight up noisy static noise, add a CRT border, or activate a CRT effect over the screen. There is also the option of removing the dungeon mini-map, changing the volume for the music and the effects, making Halloween be a seasonal thing in the game, for it to never show up, of for every day being Halloween.

There is also the option of adding a hat to your character at the Cranium Ornament ritual, and there are also different vessels – characters – to unlock as you play each of the game modes. There is one you might be good enough to unlock while you play a game of cards, as long as the luck of the draw favors you with a hand that can aid you to set free the vessel in the middle of the table! 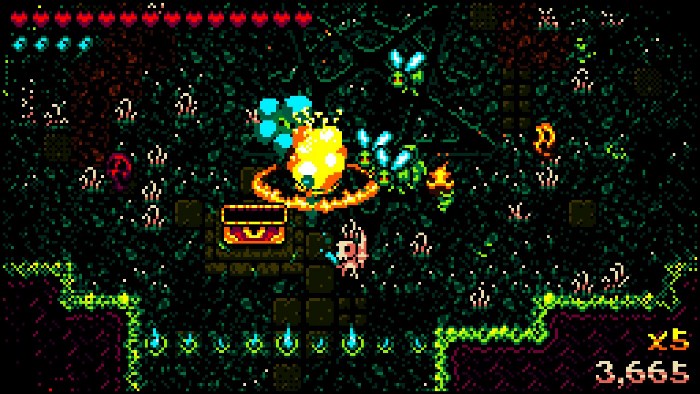 That’s right, Skelly Selest also includes a game in which you use the cards you collect as you play the other modes. In Clashful Cards, each player is given five random cards and take turns placing one card at a time. Whoever manages to capture the most cards wins, so pay attention to your opponent’s hand and the cards it has played! Each card has four power values, facing at an angle, and if the value of the card you place is bigger than the value of adjacent cards, you’ll capture it. Be careful since a very powerful card that has a number that twice as powerful as a card you’ve placed will send a power shockwave of sorts over the playing field, capturing more than one card in the process. There are also cards with special powers that you’ll need to try to see what they can do!


You can select to play against the AI, or play against a proper human situated in your vicinity. You can customize the matches so that your enemy’s deck is not open, so you don’t know what cards it has, thus increasing the overall challenge in the process. You can also set if you want traps to be activated in the table, which makes for a different card experience. I suggest you first check the tutorial to get the hang of things, and then dive into a regular game with the default settings to see if you want to spice things up or not. Win a match, and you’ll be rewarded with a card for your collection. How long can you keep your winning streak going? 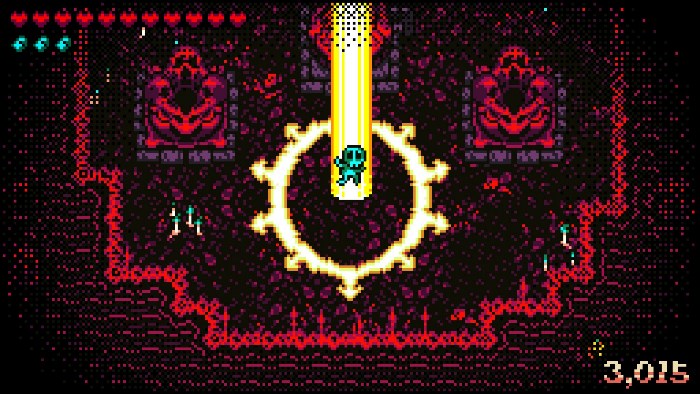 Skelly Selest has a lot of fun stuff to offer for its budget $9.99 price. Different modes, a completely separate card battle mode, and a challenging but fair gameplay experience makes this one an easy game to recommend. The one complaint I have – being limited to aiming in eight directions – seems to be a design choice to pay homage to old-school games before the analog controller age, but your take on it might be different.

Disclaimer
This Skelly Selest review is based on a Nintendo Switch copy provided by Digerati.