Wonder Boy: Monster Land released back in 1987 as an arcade game that was later ported to the Master System home console as Wonder Boy in Monster Land the following year. It stars Tom-Tom, and is a sequel to Wonder Boy, except that this time around it moves past the 2D arcade-style platforming genre to give us a game that also mixes in a few RPG elements for a bigger and meatier adventure. It still has a long way to go before it becomes the Metroidvania experience most are familiar with, but it sets the solid foundation for what is yet to come. 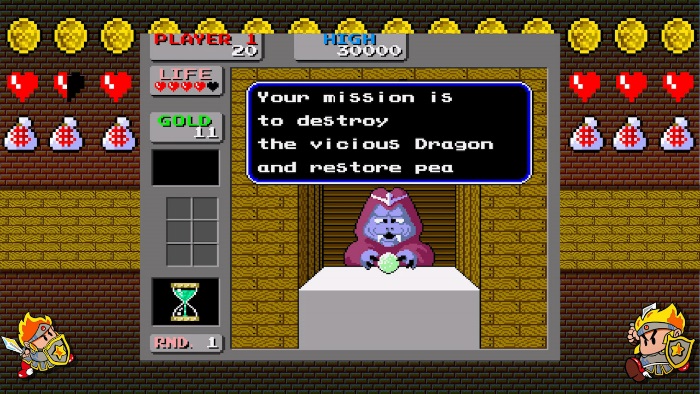 One day the evil MEKA Dragon monster and all of its minions decide to invade the land, reducing the once peaceful kingdom into the titular area in the game: Monster Land. Tom-Tom sets out on a quest to vanquish the monsters on his path, the mini-bosses that guard the keys and equipment needed to keep up with the stronger and deadlier enemies you will fight in the latter half of the game. There will also be some bigger proper bosses to defeat as well as a “bookend” sort of fight for each section of the game, so if you don’t have a strong set of armor, shield and sword combo, you’re going to be having a lot of trouble dealing proper damage!

The game is easy to control since you’ll move left and right with the left analog stick or the D-Pad, climb ladders or enter doorways by pressing up, or cast a spell/throw a bomb by pressing down. You can jump with the B button and attack with the A button. Something you should consider is that, since this is an arcade game, there are two things to keep in mind: there is a timer that counts down as you start to play, and when the clock runs out of sand, you will lose a heart; and since this is indeed a digital representation of an old-school game, you better put some coins in so that you can start with your quest! 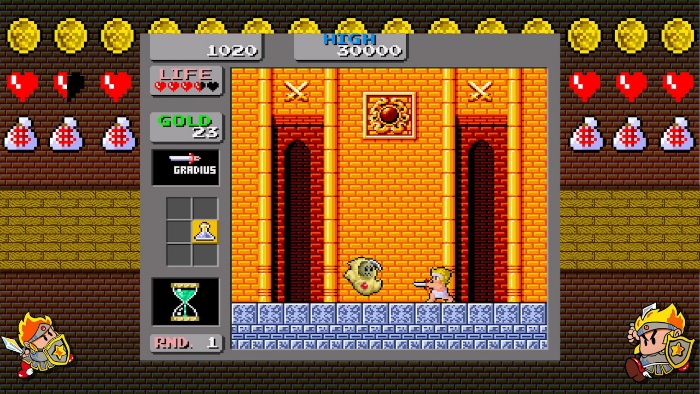 As you defeat monsters you will get to collect the gold coins they leave behind. Gold coins are important since they can be put to good use by purchasing goods and services at the shops you find. What type of shops can you find? Well, there is one that sells boots, one that favors shields, one that deals in armor pieces, and one that is rather magical as it offers both spells as well as bombs. There is also a fortune teller that can provide you with useful information on the quest you are undertaking, as well as some items that will allow you to progress in the game. You can also visit the hospital to be healed, or the tavern to heal your wounds with a cocktail or two. 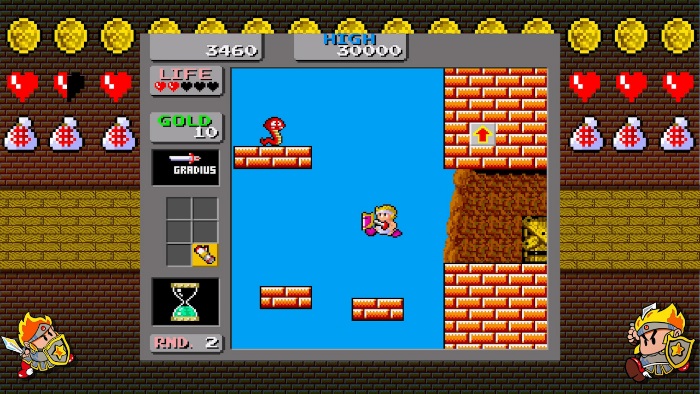 As has been the case with other releases in the SEGA AGES range, you can decide to play between the International version of this arcade classic, as well as the Japan version of Wonder Boy: Monster Land. There is also the option of setting how many red hearts you will have at the start of the game, as well as the score milestones you’ll need to reach to get more extra hearts. This version also includes a Challenge Mode in which you can play the Sphinx Challenge Time Attack (go in and defeat the Sphinx as fast as possible), Monster Castle Time Attack (ditto, but in Monster Castle), or the Fire Ball Challenge Score Attack (score as many points as possible before you’re defeated). 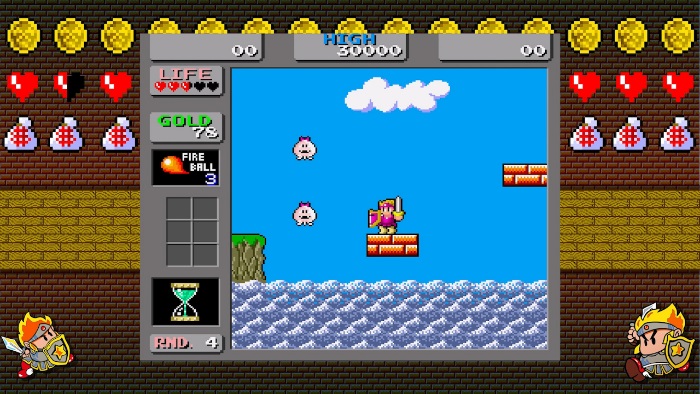 You can select the way the action will be displayed, with the playing area to be featured at the center of the screen, fitting the screen in full, or in dot by dot, as well as with scan lines, a smoothing effect, or a combination of both with the scanlines and the smoothing effect. As for the experience you will have with Wonder Boy: Monster Land in subsequent runs, you can pick to play with the Power Up New Game option that makes it so that when you begin the game, you will have the most power powerful sword, shield, and armor from your previous run. 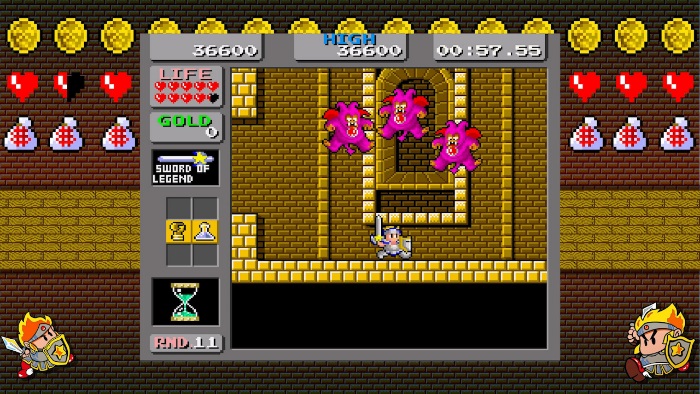 Wonder Boy: Monster Land will feel too linear by today’s standards, but it is a game that goes past what Wonder Boy did (a game that would later even split into a separate series under the beloved Adventure Island series), setting the foundation for what we would later get in future entries of the franchise. You’ll get to complete this one in an hour or two at most based on your action platforming skills, thanks to having unlimited coins to continue when you’re defeated, as well as thanks to the power of save states. 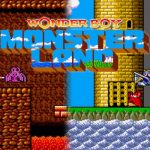 Fun but linear old-school arcade entry in a beloved franchise

Disclaimer
This Wonder Boy: Monster Land review is based on a Nintendo Switch copy provided by Sega.