Scrap Rush from Acquire and PQube is a colorful and fun single-player and multiplayer party game on Nintendo Switch with a Bomberman vibe. Learn more in our Scrap Rush review! 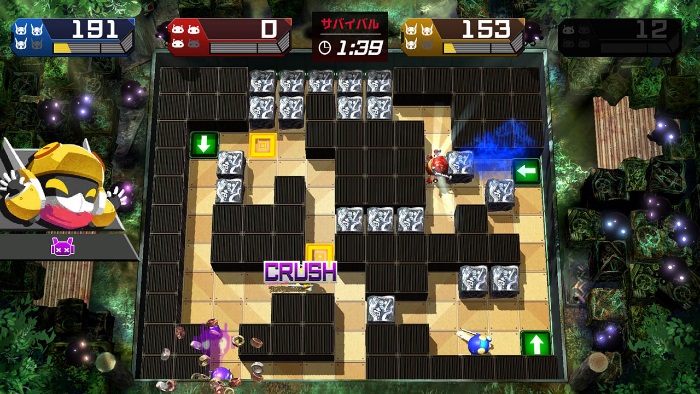 For you to learn the basics, Scrap Rush will get you started with a short tutorial. You can move your character around with the left analog stick or the D-Pad, and you’ll need to pay attention to how far you want to walk up, down, left or right since your robot will not walk more than a third of a square at a time if you don’t keep holding the same direction. To move scrap around, you can use one of three pushes. The regular push is done with the A button, and this pushes the scrap three squares forward. If you only want to move it one square, you can do so with the B button. The last one is the charge push, for which you press and hold the A button to charge up, and this sends the block flying all the way to the other side of the screen.

You can, of course, create blocks of scrap of your own, which you can then push around to try and defeat your enemies. Blocks of scrap can be created either with the X or Y button – whichever feels right for you -, and as soon as a block materializes, you can quickly push it forward towards your enemies. You can’t just create blocks out of nothing, so be ready to pay some scraps in the process. If you are crushed, which will happen a lot, you will get to respawn but will lose half your scrap in the process. The good news is that you will be respawned by way of a falling Respawn Box, and anyone that is standing below, you will end up being smashed. 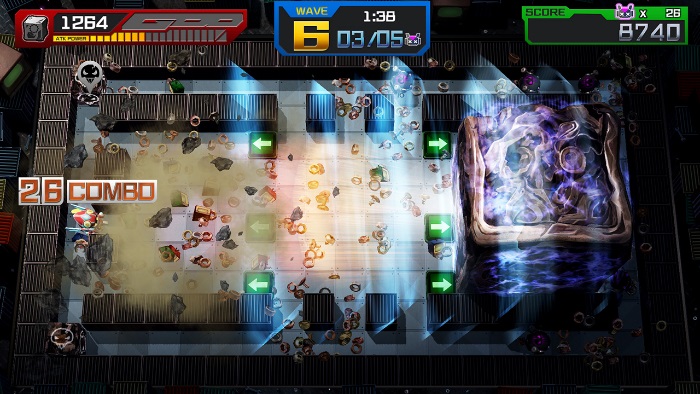 As you defeat your opponents on the playing field, you will get to collect the scraps that they leave behind when they explode. As you do this, you will be working toward obtaining 700 scrap points, which will allow your character to be upgraded. Once upgraded, your robot will gain a big boost to its speed and power, making it deadlier on the field… and a target that all opponents will probably team up against!

Once you’re done with the tutorial you will get a nice bonus bunch of scrap points, which you can use in the Shop to purchase new body colors, special blocks with extra effects, such as the bomb block which knocks out all characters within a one-tile radius from the blast, or a timed block that can’t be broken and which will go boom once the count reaches zero. You can also buy new stages with some crazy concepts, such as a stage in which you’ll have warp panels that will teleport you elsewhere or a shop stage where you can do some shopping as you fight! Beating Challenge Mode will also add extra items and other stuff to the shop. 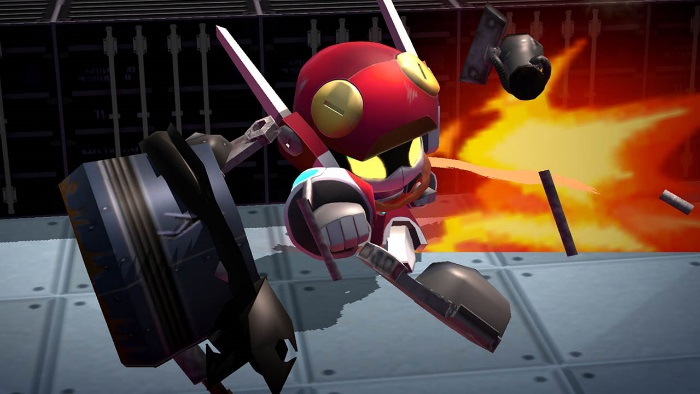 There are three game modes available in Scrap Rush. You have Challenge Mode in which you will have to complete ten stages in a row before you can take on boss Dark Scrapper who has been corrupted by the dark scrap. If you are defeated in any of the stages, you will need to go back to the first stage to give it another go. In VS Mode you can battle with up to four players, selecting between the available match types – Survival, in which each character loses a life when defeated, Point in which you need to collect the most points to win, and Scrap, in which characters are split into teams as they try and collect as much scrap as possible within the time limit.

The last one is Scrush Mode in which you’ll need to go at it on your own to survive through 99 waves of enemies. The enemies you defeat will grant you points, and the more enemies you beat in a row, the bigger your combo will be, and the stronger your character will become. Items, which I’ll talk about in a bit, will be very important in this mode since it’s how you’ll upgrade your robot. As you destroy enemies and scrap blocks, you will build up a special and rather colorful gauge. When it’s full, you can press the B button to do a God which can end up destroying even metal blocks on the playing field! 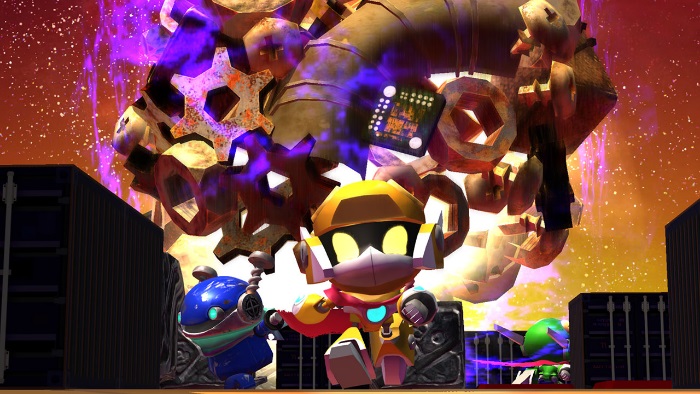 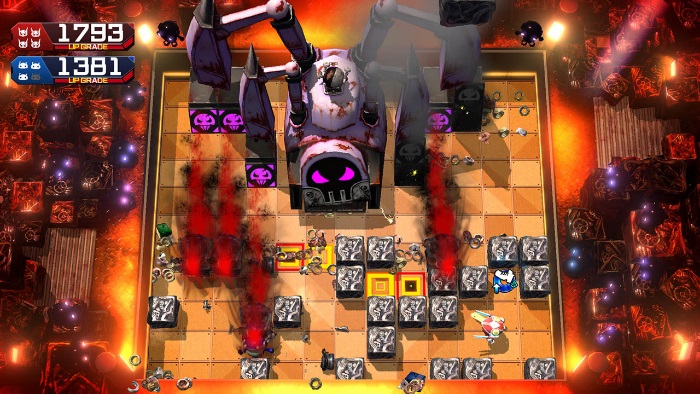 Speaking of bonus time, this will happen as you battle against other robots, and it comes in three types. The Scrap Meteor bonus time will have a huge meteor of scrap fall from above, and you need to get out of its way before it lands, or else it will destroy you. If you’re fast enough, you’ll stay alive and will get to collect the scrap left behind. The Ecowhale is a big whale that floats around the screen, making scrap rain on the playing field. The last one is Ref Rush, and it is in this one that you can destroy the referee to collect rare scrap and items. 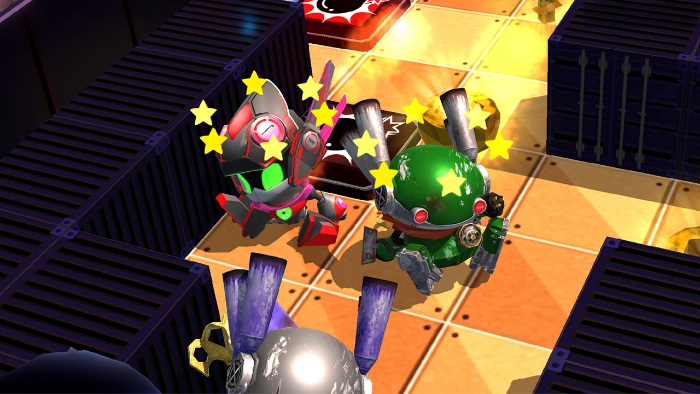 The items you can get include the red power disc which will boost your attack power so that you can push blocks and characters even further, the vacuum disc which increases your magnetism so that you can attract scrap from a larger distance, the speed disc which boosts your overall speed, the upgrade disc which will upgrade your character to a more powerful model, the life disc which grants you an extra life, and the ultimate disc that will granny you a ten second period of invincibility and makes all your scrap block pushes charge pushes.


Scrap Rush is a fun Bomberman style arena brawler that will keep you busy for a long time. While the game does offer the chance to play it on your own, Scrap Rush shines when enjoyed between four players as you take on the different available match types, working towards using the scrap you win to purchase more stages and block types to spice things up. Scrap Rush is available for a budget $14.99, so be sure to check it out on Nintendo Switch!

Disclaimer
This Scrap Rush review is based on a Nintendo Switch copy provided by PQube.

Skulls of the Shogun: Bone-A-Fide Edition Hits Switch This Month