Here comes a new PS4 and PS Vita cross-buy title in the POWGI series! Ready to learn more about this puzzle game? Then check out our Word Wheel by POWGI review!

This is a double review for Word Wheel by POWGI Review. Ceidz and ThaRaven403 played the game, and this review presents what they both had to say.


The classic word wheel puzzle goes digital! Find as many words as you can from the letters shown, always using the middle letter! There are 100 puzzles to solve and 100 groan-worthy jokes to reveal!
Up to four can play! Connect extra controllers to solve the puzzle as a team, or see who can find the most words.

For those of you who have never played the word wheel game, here’s a brief explanation: you’re presented with a wheel of eight letters and an additional one in the center, and your goal is to make words out of those letters, using them only once and always using the center letter. Traditional gameplay will ask you to find the most words you can in a certain amount of time, but in this one, it’s a bit different. You’re presented with a grid on the right side of the screen that has blank spots for each of the words in the puzzle, separated into sections by the number of letters in said words. Thanks to this, right when you start, you know how many words you should be able to find in the puzzle.

If you’ve played any POWGI titles before, you’ll instantly recognize the art style, which is consistent throughout their titles. It’s quite easy to navigate between the different pages on the right side of the screen to see the words you’re missing, and selecting letters on the left side is easily taken care of with the left analog stick – even on the sometimes too sensitive PlayStation Vita stick. Also worth noting, is that I think some of the music is actually new in this title, so it’s not completely the same as the previous ones. 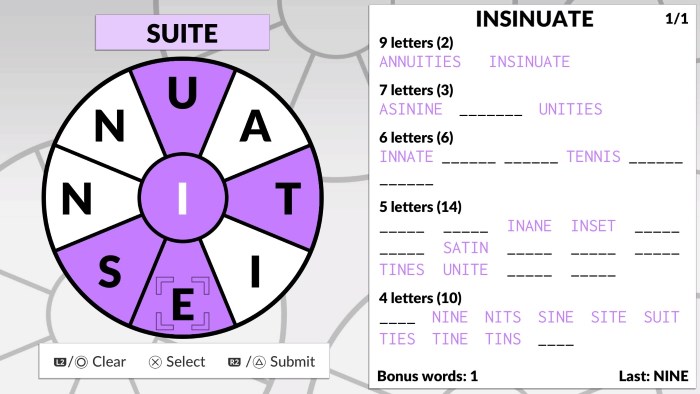 I’m used to playing similar word search games on my mobile phone, but with a grid that places the words in a crossword-like grid that helps you by eventually showing you some letter positions in some words. This game takes word search to the next level with only knowing the total number of words there are in the puzzle and their length. There’s also the possibility of playing with up to four players so that all find the words together – we tried this feature, and I’ll let Ceidz talk about it in his review below.

Even though it was challenging, I’ve had a lot of fun giving my brain a workout while trying to find the words. Since words can be singular or plural, it helps your morale to be able to quickly find a couple of words in one go with this trick. And if you consider that there are 100 puzzles to complete, each with anything between 20 to over 150 words, there’s a lot to do in this one if you’re a completionist! 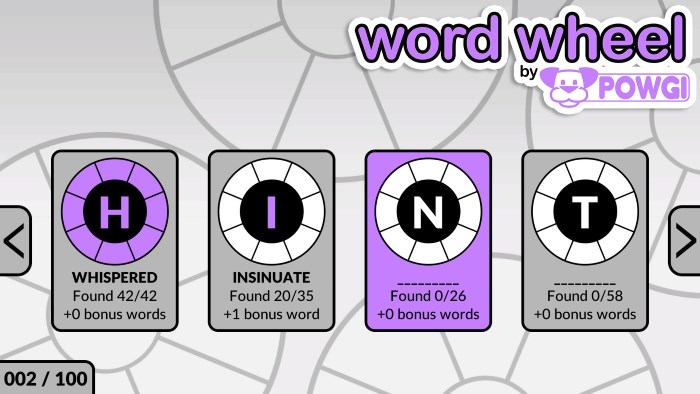 And if you’re ready to do some hunting for two new Platinum trophies for your collection, the trophy list will not disappoint you. Apart from the trophy for finding a total of 500 words and the one to find over 100 in a single puzzle, your main objective will be finding a 9-letter word in each of the puzzles. After this, it will be a pretty easy road towards those two shiny Platinum trophies thanks to the separate trophy lists.

Like ThaRaven403 mentioned, Word Wheel by POWGI is all about finding every possible word hidden in the wheel that contains a total of nine letters. Each word must be at least four letters long, and a list of every word that can be found in each puzzle is shown on the right side of the screen, so we have an idea of what we need to aim for.

I was new to words games as I started playing Word Wheel, and this was my first experience playing a POWGI game. Being new to the genre, I thought at first that this game was quite hard, but the actual difficulty depends on how good you are at detecting patterns and words hidden in the wheel. Once I had found a few of the words, and gotten used to the letters available in a puzzle, finding the rest of the words became more accessible. 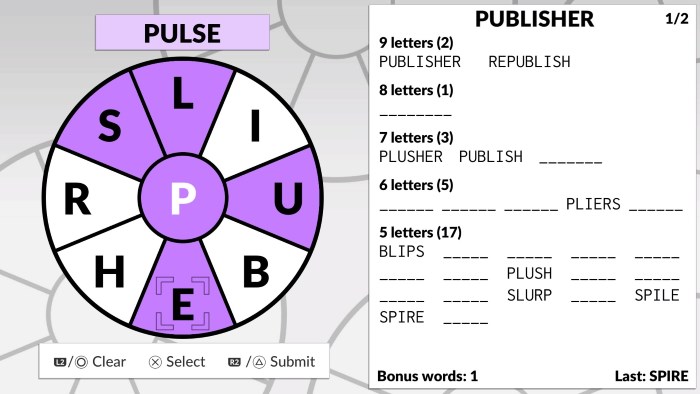 One of the things I definitively liked was that there are a ton of different puzzles open to you to give it a go – 100 puzzles is definitely a nice number. So whenever I ended up stuck in a puzzle, I only had to go back to the menu, select any of the other puzzles, and dive in. Luckily the game saves your progress in the puzzle you were playing, so you can carry on once you’re ready to give it another go.

The trophy list is mostly for trophies that ask you to find specific words (luckily an online guide exists for the game), and I actually laughed out loud when I “accidentally” unlocked the trophy that mentions “This is a family game.” I’m not spoiling anything about this one – you’ll understand when you unlock it.

ThaRaven403 and I tried playing together using the Remote Play feature, and it was as if we were sitting right next to each another using the built-in Party feature of our PlayStation 4. At first, we weren’t sure how this single-player-driven experience could be expanded to allow for more than one player, and it turns out it works out pretty well! Basically, the light bar color of the DualShock 4 changes to represent a player’s color. As you can see from the screen capture below, each player can now help to find words to quickly solve the puzzle. Since each player is working towards finding different words, we eventually thought it didn’t encourage much local couch co-op conversation since each player was thinking about which words he could find, but when a harder word was found by one of us, it was fun to celebrate together! 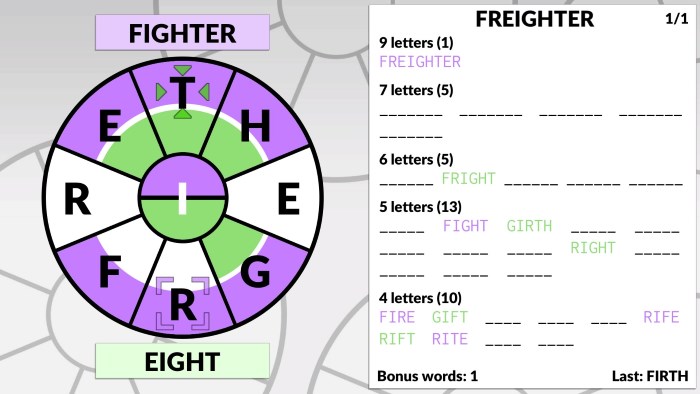 Final Thoughts
Word Wheel by POWGI is a game we both liked playing in short sessions between taking on bigger game releases. There are as 100 different puzzles to complete, which gives you a lot of bang for your buck. Since the game is cross-buy, buying the PS4 version will give you the PS Vita version for free, and the same applies the other way around. Add how the game has a Platinum trophy and that each version has a separate trophy list, and this $7.99 purchase is certainly going to please both puzzle games and trophy hunters alike.

Disclaimer
This Word Wheel by POWGI review is based on PlayStation 4 copies provided by Lightwood Games.