Devious Dungeon 2 is a new one from Ratalaika Games, who has released a lot of cross-buy games on PS4 and Vita, and with separate trophy lists! It’s time to look at this dungeon crawler in our Devious Dungeon 2 review!


It is said that great adventures await behind the walls of this dark castle, Devious Dungeon 2 is a medieval focused action platformer title.
The castles ever shifting halls are filled with deadly monsters! Treacherous traps have claimed the lives of many adventurers! It is rumoured the castle contains treasures beyond imagination.

This is a double review for Devious Dungeon 2 Review. Ceidz and ThaRaven403 played the game, and this review presents what they both had to say.

At its core, Devious Dungeon 2 is pretty similar to the first title. Your goal in each level is pretty simple: find the key that unlocks the portal to the next one. Each of them is packed with monsters that become stronger as you advance in the game. At every three levels, you unlock a portal so that you can start back from that level should you die later on, and a boss awaits you at every 13th level.

Having said that, there are also a lot of changes that make the game a lot more interesting than the first one. It all begins when you start a new run, as this time you can choose between three different hero classes, each with a unique special ability. The Barbarian is pretty much the same character as in the first game, a close quarter guy that has an ability that reduces all incoming damage by 20%. The Mage uses a wand that throws projectiles, so he’s always best at a distance, and it has the ability to levitate temporarily. The last one is the Rogue, who mixes close combat and ranged weapons, and it also has a quite useful double jump. 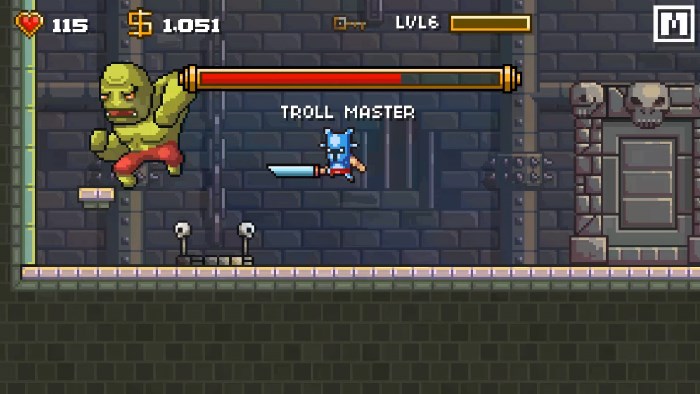 A few things have also changed in the levels to make them more fun to play. A lot of enemies are coming back from the first game, but there are also new enemies and sub-bosses that you’ll randomly find in some levels. Those are a lot tougher than usual enemies but grant a lot of experience and money when you defeat them. There are now spike traps that raise from the floor at a fixed interval which will require some precise timing to avoid them and falling spears from the ceiling that fall as you pass under them.

Even if the game’s 60+ levels are a bit repetitive, I enjoyed it quite a lot, just as I did with the first game. The fact that you now have sub-bosses and special treasure to find make the exploration a bit more worth your while than just finding the key and getting out as soon as you can. 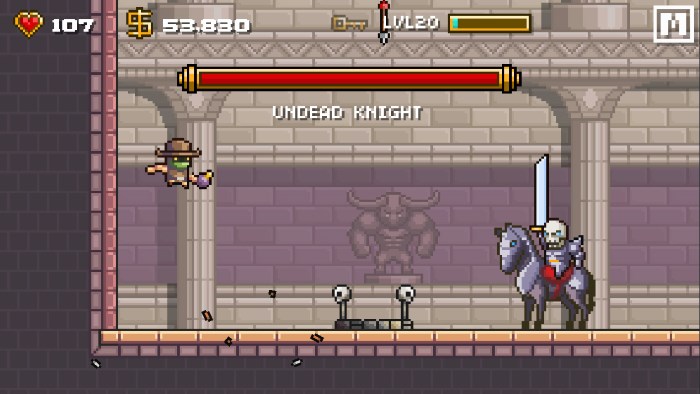 The weapons system has also evolved into something a bit more elaborate. Some of your weapons can have special effects such as dealing poison or fire damage over time or having different attack ranges. In general, you should make sure to buy the best weapon possible so that you can keep up with the increase in difficulty.

As for the trophies, this is another easy double platinum (cross-buy with the PlayStation Vita!) that you can get in a handful of hours of play, with a pretty straightforward list that you’ll easily get if you take the time to collect all the hidden treasures and kill all sub-bosses in the game – one run start to finish, and you’ve got yourself a Platinum trophy!

Devious Dungeon 2 is a side-scrolling pixel 2D, and I thought it was very similar to the art style of the amazing Half Minute Hero. On the PlayStation Vita, the performance is, unfortunately, below average, as the game’s framerate frequently dips below an acceptable level, even if there isn’t that much going on the screen.

The game starts quickly as the first thing ever is selecting the character class of the hero you’ll be taking out on an adventure. As ThaRaven403 mentioned, the classes change the actual gameplay a little, so there is some replay value in this one – I went with the Rogue class due to its very useful double jump ability. As for the story, we learn that an evil summoner kills adventurers that dare to try and go through his castle, and, as expected, our job is to get rid of him.

The exploration in this game is basic. Depending on how far you are in the campaign, the general area is automatically selected, and you have to clear a few sub-areas that are in fact randomly generated levels based on the general theme of the area you’re in. Every three levels , you reach a checkpoint at which you can are healed and can purchase some new gear for your quest.

Devious Dungeon 2 is a challenging adventure, and when you end up dead in the second level of a sub-area, you’ll end up being sent to the start of the area as you didn’t manage to reach the third location. At least, when you die and go back to the hub, you keep your gear and money, so you can purchase better equipment, thus allowing you to beat that area and move on to the next one. 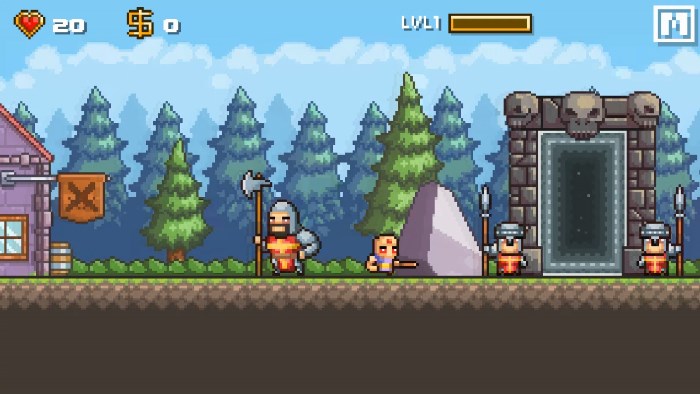 There are a lot of different levels based on the same areas, and on that subject, I thought that the exploration got monotonous when you’re in the 20th level of the same area, fighting similar monsters. There are some sub-quests that add some variety, like killing X number of one enemy type or destroying Y number of crates, and clearing those gives you some extra money. Borrowing some RPG elements, you also get experience points when defeating monsters, and leveling up replenishes your health, and grants you with a custom bonus on either damage done to enemies, critical rate, or maximum health. There are also mini-bosses that spans randomly in the dungeon, and if you can manage to beat them, you’ll collect a whopping amount of money. 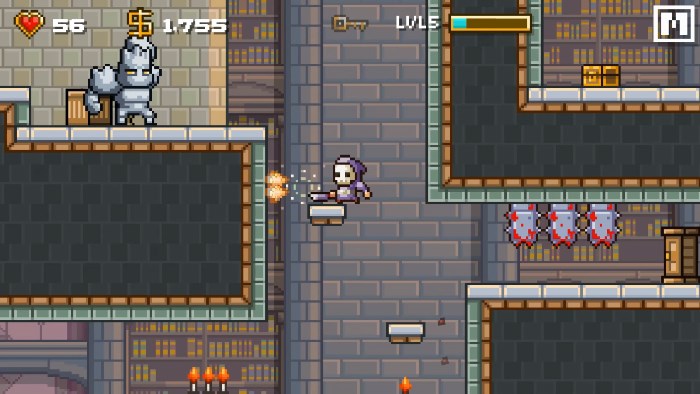 Final Thoughts
Even though it is not a giant leap over its predecessor, Devious Dungeon 2 still found a few ways to improve over the original formula. It’s the kind of game that is great to play when you don’t want to dive into a big AAA title and are looking for a simple yet fun experience. If you’re playing on the PlayStation Vita version, be wary that there is a lot of slowdown in the campaign, but at least you also get the PS4 version for free!

Disclaimer
This Devious Dungeon 2 review is based on PlayStation 4 copies provided by Ratalaika Games.