After the re-release of the Arland trilogy of the long-running Atelier franchise, Gust and Koei Tecmo are back with a sequel. Find out more in our Atelier Lulua: The Scion of Arland review!


A continuation of the Arland Trilogy, which has recently been remastered for PS4 and Nintendo Switch.

The main character, Lulua, is the daughter of Rorona from the first game and the game will feature systems from recent Atelier games including the Mysterious trilogy.

Taking place after the events of Atelier Meruru, the last game in the original Arland trilogy, this title follows Elmerulia “Lulua” Frixell, the daughter of the legendary Rorona from the first title in the trilogy. Lulua studies to become as good an alchemist as her mom, but her efforts haven’t been paying off so far. After successfully making a bomb for her friend Eva, she discovers it is in fact to help Father Benon, the man taking care of the orphanage, who took on the request of killing a monster living in the Fellsgalaxen ruins, something he likely won’t be able to complete on his own. 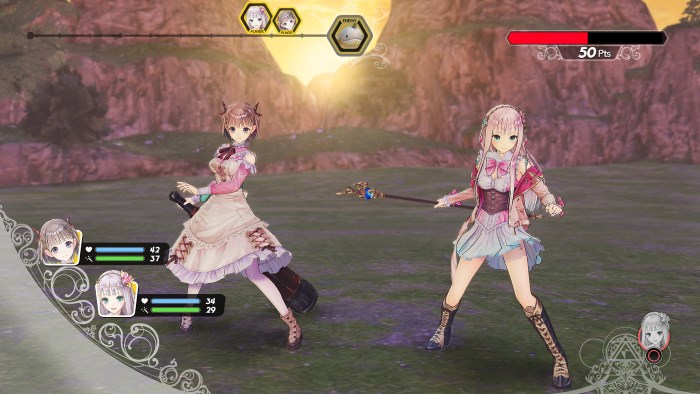 After Lulua and Eva decide to eliminate that monster for him, and then getting saved by Lulua’s teacher Piana, they come out of the ruins only for Lulua to be hit hard on the head by a magic book that came out of nowhere. A bit later, after receiving an alchemy request from the son of Arland’s King, the book will reveal part of its content to her to help with said request, and thus will begin Lulua’s quest, which will be strongly guided by the book and its mysteries!

Speaking of the book, which you’ll learn is called the Alchemyriddle, the story of the game will evolve by what its pages reveal. Gone is the mechanic where you have to complete a certain number of assignments by a certain date, which is for me a welcomed change since that separates this one from the original trilogy, since you can now go at your own pace. With this also comes a new mechanic: deciphering the pages of the book! Every time a new page becomes available, it gives you hints for places to visit, monsters to fight, or items to synthesize to be able to decipher it. Since the pages are not deciphered in a linear manner, you’ll sometimes have to wait to progress the story a bit further before being able to access places you need for some clues. 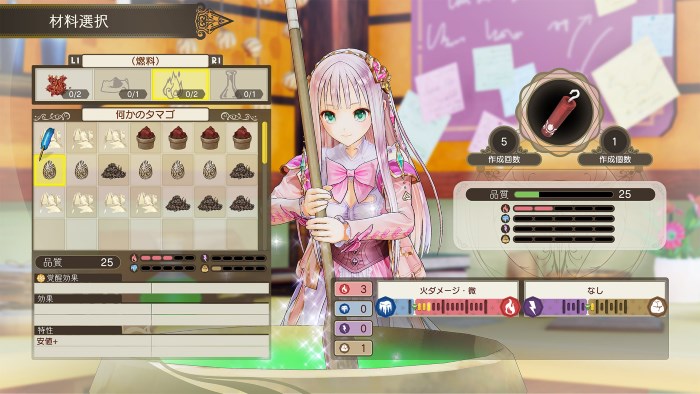 An Atelier game wouldn’t be one if there wasn’t any gathering of materials or synthesis, so this system is still very much at the core of the game. Synthesis is still done by selecting recipes you know, then the different items required to make the recipe. There are various effects on the items you select that can influence the results of your synthesis, combined with the traits you can select after creating the item, so people wanting to go deep in the crafting system will have lots of possibilities.

When you’re out gathering, you’ll occasionally run into monsters that you’ll need to take out in turn-based battles. As in most Atelier games, you’ll have a choice of attacking or using skills, as well as the option of using items for your character. A new feature for the battle system is the Interrupt ability. By equipping an item to use on your character, you’ll be able to use it any time in the battle as long as your gauge for it is charged. This means that you can interrupt an enemy’s attack to maybe take him out before he actually manages to do something, so if properly used, it could turn the tide of battle!

Visually, you can expect the same colorful world that you see in every Atelier game out there. It’s not visually stunning like those big next-gen games, but given that we get approximately a new Atelier game every year, I understand that the graphics engine doesn’t receive a major overhaul. 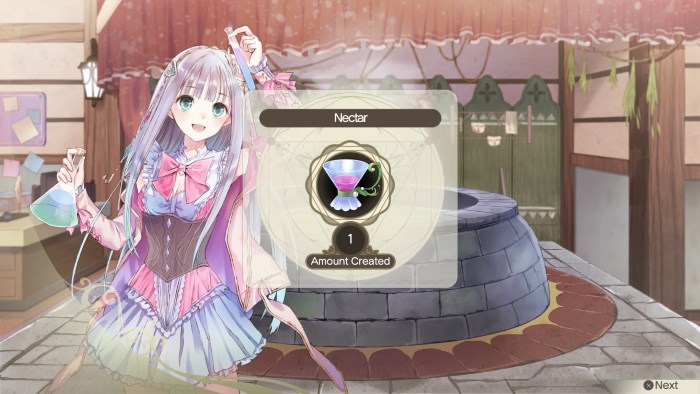 I’ve played quite a few Atelier games since I started reviewing games here, and even though they all share many elements, they’re always a good time, and Lulua’s quest is no exception. The one thing I was truly glad to see is the removal of the timed requests. I’d rather go at my own pace, re-visit gathering spots if I feel like it without putting my game at risk, so this is something I really enjoyed. Combine this with the mysteries of the book, and it makes the pace of the story a lot more interesting and mysterious in place of the traditional “solve x number of requests for the next three months.”

Another thing I really liked (and that I don’t think I’ve seen in previous titles) is the fact that the synthesis system shows you the recipes you can complete after synthesizing other items, instead of just showing which ones you can and can’t. This system can be pretty complex to master, so a little help like this to guide you in making your recipes is appreciated! 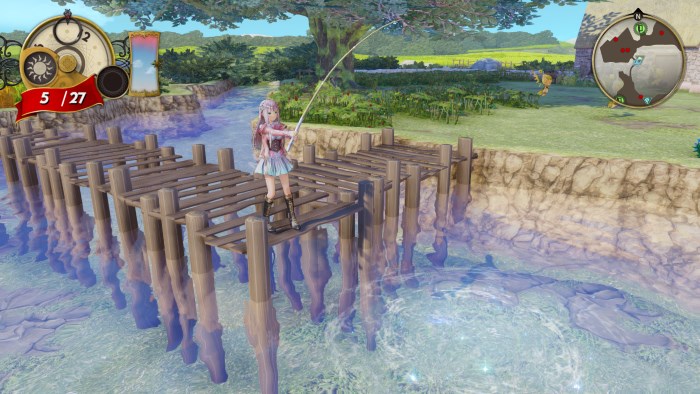 As for the trophies, there’ll be quite a lot of things to do to reach the Platinum trophy. First of all, there are multiple endings to unlock, so some save management will be important. Other than that, you’ll have to completely decipher the Alchemyriddle and do a couple of other things that will require a lot of extra time, such a 100% exploring every gathering spot the game has or synthesizing all the recipes. But if you like the game, it won’t feel like a chore at all.


Final Thoughts
With the small changes and tweaks here and there that were added in this title, this feels like the best Atelier title I’ve played so far. It’s got everything that made this series so good and popular with a few things that take it to the next level. Definitely worth playing for any fan of the Atelier games and worth trying for people new to the series.

Disclaimer
This Atelier Lulua: The Scion of Arland review is based on a PlayStation 4 copy provided by KOEI TECMO AMERICA.

We. The Revolution Ready For It’s June Release