Iron Snout is a button mashing beat ’em up from SnoutUp Games and Ratalaika Games, with a quick and simple pair of Platinum trophies. Learn more in our Iron Snout review!


Once upon a time, pigs would have to build a house of bricks to keep the wolves at bay, but not anymore. In Iron Snout, its hero piggie has taken up learning martial arts and now it’s the wolves that need to keep their distance because in this bonkers button-mashing beat ’em up, bacon is off the menu for good.

Only, hand-to-hand combat isn’t the only way to fight off hordes of wolves, so when the going gets tough, the tough picks up a butcher’s cleaver. After all, how else are you going to defend yourself against wolves that ride wrecking balls and wield chainsaws?

It may have been a wolf eat piglet world once before, but this time, the tables are turned in this addictive fighting game that’s got to be played, to be believed.

This is a double review for Iron Snout. Ceidz and EdEN played the game, and this review presents what they both had to say.

At its core, Iron Snout is a parody of the story where a wolf was destroying the pigs’ houses by blowing on them. In this game, a pig is out for revenge and will use his martial arts skills to punch every single wolf that crosses his path to make things even.

The gameplay is shown in a single screen, so instead of walking or running around through different areas and environments, as you’d do in a game like beat ’em up classic Double Dragon, the pig just stays in the center of the screen, and the wolves come from both sides of the screen to try and deal some damage. You can unleash fast-paced combo attacks by using either the D-Pad or the face buttons to attack low, high and up in both directions.

Iron Snout is really easy to get the hang of, and after playing for two minutes or so, you’ll already have mastered the controls and seen everything that your pig can do. After playin for 15 minutes or so, you’ll start to realize that it is in fact, a very repetitive arcade-style type of game as you encounter the same enemy types over and over again.


To add some variety, there are three different modes, which are variations on the same theme. The main one is Classic Mode and the one you’ll most likely spend most of your time playing. There’s also a One HP mode which is pretty self-explanatory. And then there’s Pig vs. 100, in which you fight wave after wave in order to defeat 100 wolves with a single life. On the PlayStation Vita, the performance is top notch, and the hand-drawn visual style looks good. 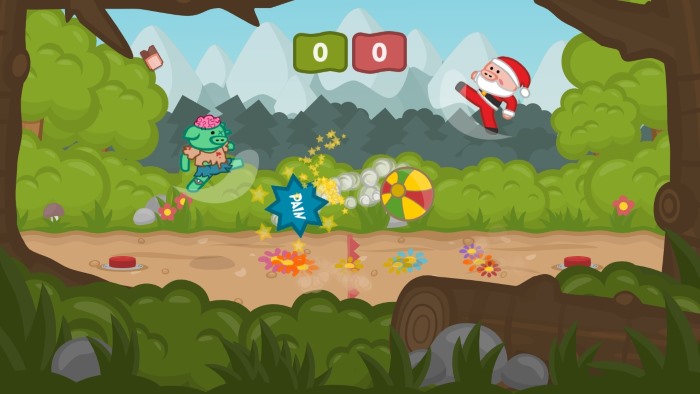 Iron Snout is a game that does not take itself seriously, what with the main pig character ready for action in the center of the screen as it gets ready to defeat every single wolf foolish enough to come his way. Then there’s how the health of the poor fighitng pig is represented as bacon slices, and trophies dive in and have fun with the pig’s nature by joking about ham.

Wolves will be coming to get you from the left and the right, and depending on the enemy type, some will sometimes walk slowly, while others will make a mad dash towards your pig. Some will carry weapons such as a large cleaver (or two!), a chainsaw, or a spear with a sharp blade that is being used as a pogo stick. Sometimes when you hit an enemy up and sending flying (or when you defeat it), it will lose its weapon, which you can quickly grab to put it to good use. There’s also an enemy that comes into the screen flying on a large red rocket, and if you hit it just right, you will throw him off the rocket, and the rocket will end up flying towards the other enemies, killing them in one hit. By changing the location in which the fighting takes place, you will also end up having to grab knifes and cutlass in the pirate setting, or canes and soccer balls in the urban setting.

As for the trophies in the game, there is one for popping all balloons in the tutorial in less than ten seconds, for defeating ten enemies in 1 Hit Point mode, for landing an epic 25 hit combo, for killing wolves with the different weapons you can grab as you fight, as well as several trophies that are a bit grindy since they ask that you defeat X number of wolves, or that you catch Y number of weapons. Trophy hunters worry not since you can get the Platinum trophy in around 40-50 minutes depending on how many wolves you can defeat per run.

Final Thoughts
Iron Snout is another arcade-style minimalist game from Ratalaika Games that is now live on PlayStation 4 and PlayStation Vita. It’s also a cross-buy game, so your one purchase will give you both versions and a chance of adding two more Platinum trophies to your collection. The gameplay is simple and easy to understand, and the game is fun in shorter bursts of 5-10 minutes at most.

Disclaimer
This Iron Snout Review is based on PlayStation 4 and Vita copies provided by Ratalaika Games.