As a Ghost Giant, you must help your friend Louis, who’s grown up much quicker than he should have. Can you do it? Check out our Ghost Giant review!

– Step into Louis’ world and break the wall between protagonist and player in a highly immersive VR story.
– Maneuver a unique diorama world by opening roofs, grabbing cars or rotating a whole house! While you’re at it – why not use a crane as a huge fishing rod?
– Explore the cozy miniature village of Sancourt and help its citizens with all their quirky problems by using your strength and wits.
– Experience a heartfelt adventure about friendship and courage, written by internationally acclaimed writer Sara B. Elfgren.


Ghost Giant is a new game from Zoinks studios that focuses on the tale of Louis, an anamorphic cat that has felt some hardships in his life, and his sadness and tears have created you, the Ghost Giant, to help him.

At its heart, this game is an adventure game with a strong, emotional narrative – in other words, it’s right up my alley. You are the Ghost Giant in the game, and you need to help Louis with his tasks. As you are a giant, your point of view is from above, with areas wrapping around you. You can use the Square and X buttons to rotate around the field of view, allowing you to interact with everything. 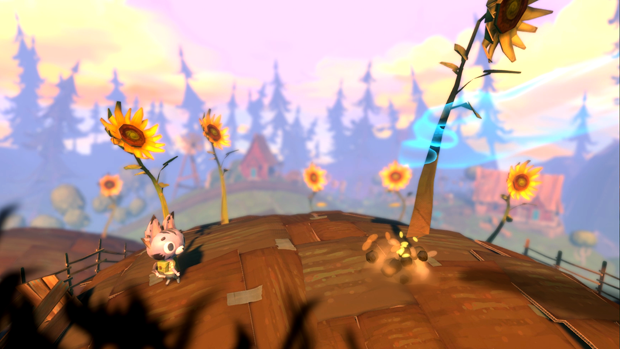 Louis needs help as due to his circumstances, he’s needed to mature quicker than he probably should, but he still needs help. That’s where you come in, as the Ghost Giant you can interact with the environment to help him. Items that are brass you can move or interact with, helping Louis with his tasks.

Using your Move controllers, you can press the triggers to grab objects and the Move button to point at things. At one point in an early scene, you need to help fix a broken crane. Around the area are hidden brass gears. You need to find each one, some are easier to collect than others, to be able to get it working again. While they may not all be easily located (what would be the fun in that?), if you look at the level closely enough it gives you the clues necessary to decipher what needs to be done.

You can also interact with Louis by pointing at him, and he will give you clues if necessary. What I really liked was just the personality they put into him. While you are going through his story, they really make you fall for him and want him to succeed. Even small things like giving him high fives when he asks for it or doing your secret handshake. It helps to build your relationship as you see the struggles he is going through. 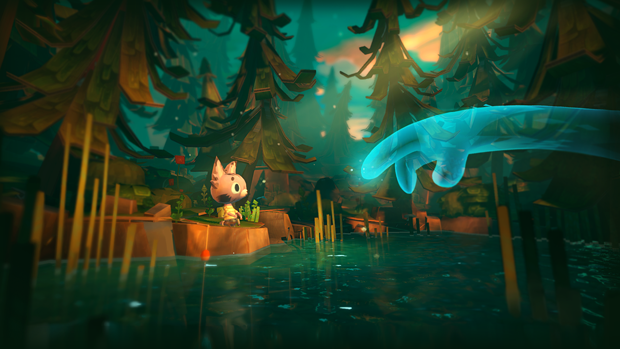 The game isn’t too long and can be beaten in a few quick sessions. With most adventure games, it’s not about the gameplay time total, but the story told and the journey to get to the end. Ghost Giant never falters with this, moving you from area to area while keeping the narrative going.

The world looks beautiful, mixing a papercraft world with well-realized anamorphic characters. You really need to examine each area, and it’s nooks and crannies as you are trying to solve the puzzles or find some of the collectibles including hats for Louis, bugs, a windmill and a basketball that must be thrown through a net. After you finish the story, you can jump back into the scenes looking for collectibles missed. I found I got pretty good at finding them near the end of the game, making it pretty simple to jump into the beginning and do clean up. 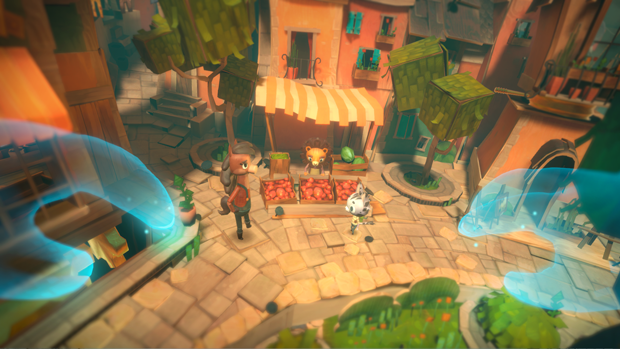 Ghost Giant is going to be added to my list of must play PS VR titles. The game makes great use of VR in interesting ways to tell a compelling story, which some games screw up. The puzzles were great and well designed, and if you pay attention to the environment, you will be able to solve them without an issue. If you have a PS VR unit, this is a title that shouldn’t be missed!

Disclaimer
This Ghost Giant review is based on a PlayStation 4 copy provided by Zoink AB.

Trover Saves the Universe Out Next Week