Warhammer: Chaosbane from Eko Software and Bigben Interactive is a hack and slash action RPG that is going to give you some Diablo-esque vibes as soon as you start your adventure. As the name suggests, it is set in the Warhammer universe from Games Workshop, famous for their many game and miniatures, so this time you’ll be taking on a new digital in a fantasy world packed with humans, elves, dwarves, orks, and more. You will witness this right from the start as you decide on which character to take as your avatar.

There are four characters to choose from in Warhammer: Chaosbane. You can either select battle-hardened human empire soldier Konrad Vollen, mystical high-elf mage Elontir, deadly slayer dwarf Brag Axebiter, or nimble wood elf scout Elessa. Each character has its own set of skills to use in battle, which means each character will be best suited for some playing styles over others – you could eventually play through the whole game with each character and get a different experience each time! 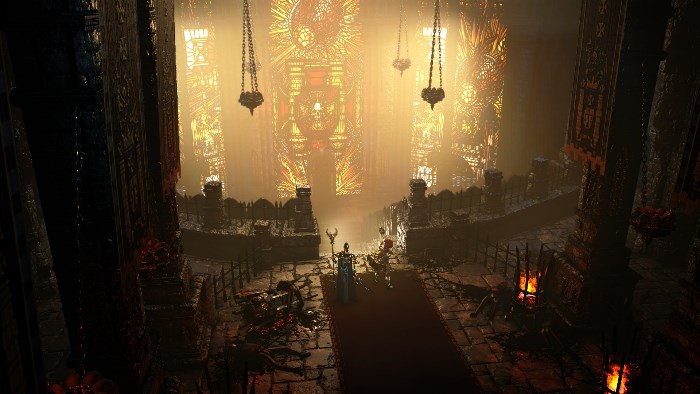 Let’s talk, for example, about Elessa. She excels at long-range combat, and her speed can help to keep her at a safe distance from danger. She also has different spells she can put to good use in battle do slow down her enemies while also having the ability to poison her opponents – you can probably see how those two abilities, in particular, could be very useful. On top of this, she has the ability to call on the help of Dryads, forest spirits that will help to turn the tide of battle. She’s a fast character that can use her skills to slowly but surely chip away at the hit points of her enemies until they are defeated.

After selecting your hero, you can either jump straight into the game on your own, or in local or online co-op. There is also the option of changing the difficulty setting if you want to customize your experience. The game’s default difficulty setting is Normal, which is the overall standard experience. If you want to make things a bit easier on you, then you can certainly lower the difficulty to Easy or Very Easy, but there is a catch. The lower the difficulty, the lower the quality of the loot you find during your adventure – Very Easy lowers that by 91%! If, on the other hand, you’re looking for a bigger challenge, you can change the difficulty to Hard, Very Hard or Chaos, up to a Chaos 5 setting that will boost loot quality by 232%… along with having you face enemies that will completely destroy you if you make one mistake.

The game throws plenty of enemies at you at all times, so you should always keep an eye on your health, which is displayed at the bottom left corner of the screen. If it gets too low, you should use one of your potions by quickly pressing the L1 button. You need to do this at the right time since after using your potion, you will need to wait for a cooldown period to be over before you can use another one. Don’t bite more than you can chew, or else you won’t be able to use enough potions in time before you end up dead due to your carelessness. 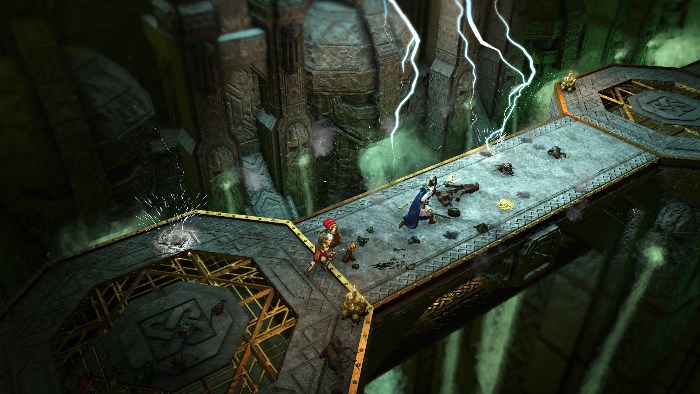 Skills are a very important element of Warhammer: Chaosbane, and you should make good use of them if you want to stay alive. To be able to equip a skill, you will need to use Skill Points, which you can get every time that you level up. You can also unequip a skill to recover those Skill Points so that you can use them for something else, finding the right combination for your playing style. There are active skills, which you can map to the Circle, Square, Triangle, R1 an R2 buttons (and which will be displayed at the bottom of the screen), as well as passive skills that are available just by equipping them on your character, so be sure to find what works best for the situation at hand!

But before you do that, there is something that you need to consider. You can’t just dive into equipping the most powerful skills right from the start because of two things: first off, the more powerful a skill, the more Skill Points it will need for you to unlock it. But even if you have enough points to unlock a skill, your character will also need to be of a particular level before that skill is available for you to activate. Skills can’t be spammed over and over, as that would make for a very unbalanced gameplay experience, which is why every time you use an active skill, some of your energy will be used. Your energy meter is right next to the one for your health, so be sure to keep an eye on that or else you might find yourself unable to use a skill when you most need it. 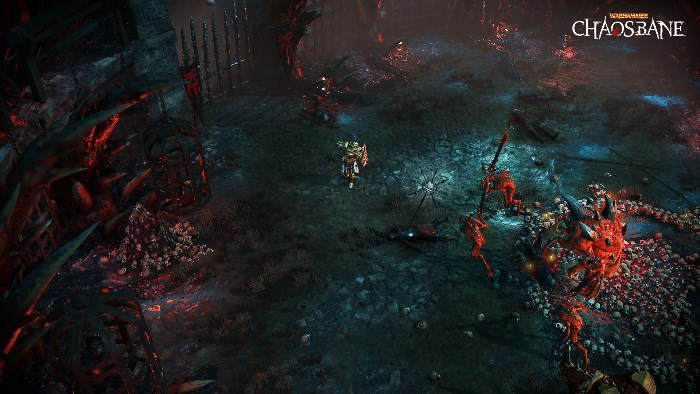 As for the game’s trophies, this one will both please trophy hunters as well as make them worry about what needs to be done, as it features a full trophy list with a Platinum for your troubles… and some rather challenging trophy requirements. There are trophies for completing the game as each of the four available characters, as well as a Gold trophy for when you have managed to do that, trophies for reaching level 25 and level 50 with any character, for killing 1,000 cultists, 1,000 daemons, 1,000 ungors, and 100 champions, for completing your first full set of equipment, or collecting 1,000 pieces of equipment. And then there are the trophies that ask that you kill a boss while playing in Chaos 5 difficulty, a task that you best take on after you’ve completed the game a few times so that you can make the most of the gained experience.

The team has mentioned that they will continue to support the game after launch, adding new stuff that players will gain access to for free – new difficulty levels, new loot, a Permadeath Mode, as well as an eventual level cap increase with new skills. There is also some paid DLC on the way, which you can get if you purchase the Warhammer: Chaosbane season pass. First up will be a new set of emotes as well as a passive skill that will boost your odds of finding heroic items. The second one will add a new skill tree for each of the characters. The third paid DLC will add new companions for all characters. And the fourth DLC will be the big one, as it will add a new story that will be set in an act separate from the main campaign, taking you to new areas to explore. 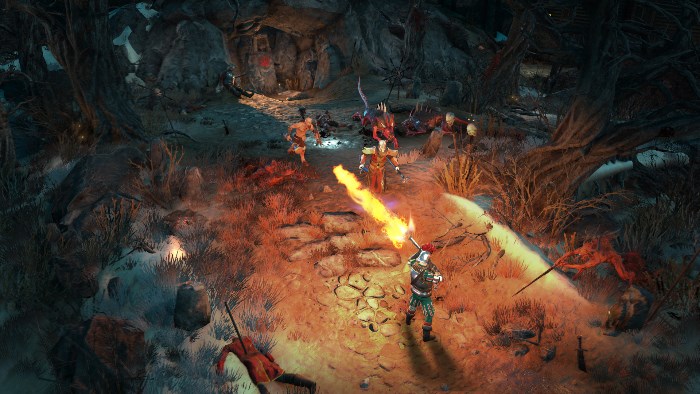 Warhammer: Chaosbane is a very fun action RPG hack and slash on PlayStation 4. It’s a well-executed video game experience that is very addictive, and that keeps you coming back for more, either on your own or to play with friends or strangers. It offers a good amount of content as well as four playable characters for you to take on, and once you’ve completed the campaign, there is actually more stuff for you to do! You’ll be able to keep all the things you’ve unlocked up to completing the main campaign, and can then take on a new character, dive into Expedition Mode in which you can take on randomly generated levels, or take on Boss Rush Mode in which you’ll battle against the bosses you’ve faced. 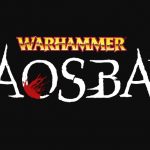 Disclaimer
This Warhammer: Chaosbane review is based on a PlayStation 4 copy provided by Bigben Interactive.

Ghostbusters: The Video Game Remastered Is On Its Way