God’s Trigger is a top-down shooter from One More Level, and as you play through the game, you will find yourself saying “just one more level.” Find out more in our God’s Trigger review!

WARNING – This review is aimed at a mature audience because of the game’s depiction of violence.

Let us start from the beginning. God’s Trigger from One More Level and Techland Publishing sees its protagonists try to stop the Four Horsemen of the Apocalypse as they try to kick start the end of the everything a little bit sooner than anyone would like and the only thing standing between mortals and the end of the world is Harry, a fallen Angel, and Judy a demon exiled to earth for over 2000 years and when they met it was murder!

As a top-down shooter, God’s Trigger can be likened to 2012’s Hotline Miami. With its puzzle-like gameplay, its 80s-esque soundtrack and one hit, you are dead motif, the game is a joy to play.

Aesthetically speaking, the game is a joy to behold. The colors are vibrant, the visceral nature of the violence and the abilities you use are as satisfying as you would like. The levels are designed imaginatively to a high standard and varied enough for you to never feel as though they are repetitive. Even when played from a top-down perspective, the game is still atmospheric enough to give the mood of the different settings you visit. The level layout is also put together with a lot of care with the enemy layout being their own mini puzzles as previously mentioned and actual puzzle elements are thrown around some of the levels, though not mind breaking, they do and a bit of a mix to the gameplay. 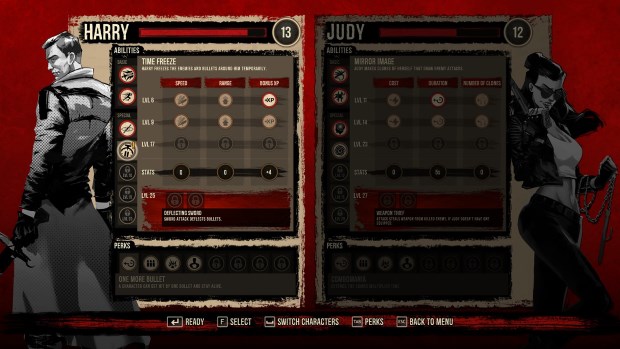 From a gameplay perspective, it feels exactly as you would expect from what amounts to a modified twin-stick shooter. The control feels good if sometimes a little bit rough around the edges, but as with any good puzzle game, it is the tools you are given to solve a problem that makes the experience worth it. The array of weapons you are given per level is thematic and plentiful and help to play up that puzzle style gameplay. That is not to say that the characters that you play are not distinct in their own ways. You notice the style of gameplay change slightly depending on who you play as, Harry players will come to know his more in your face brute force approach, whilst Judy players like me will come to appreciate her more distance style of combat.

The game can be played in local co-op but single players can control the two by using the O button to switch between the two, whilst it’s arguably slightly harder, it is still an enjoyable affair. To add an extra layer to the gameplay, the characters each have unique abilities and perks developed by an interesting leveling system that can be modified at the start of each level allowing for further accessibility for the game.

Sound design is great. From time to time the songs can get annoying especially if you get stuck in a particularly difficult section, but most of the sound is excellent from the voice work to the meaty sound of some of the weapons across the game.

There is a lot that can be said about the game, and most of it is nothing but glowing praise. Even the length doesn’t feel like it is outstaying its welcome or feels too short though when you do fall into the right grove, things do certainly go at a good pace.

In summary, God’s Trigger is an excellent game whether played solo or local and is just right for hitting the puzzled top-down shooter itch you did not know you had.

Disclaimer
This God’s Trigger Review is based on a PlayStation 4 copy provided by Techland Publishing.