First-person adventure Falcon Age is ready for you on PlayStation 4. Learn more about this charming game in our Falcon Age review!


As you start Falcon Age, you will be staring into a room from outside of a window, looking at the character you will be taking control of. Once you select to wake it up, you will be given your first objective: get food. Once you start to walk around with the left analog stick and move the camera with the right one, you will spot a food dispenser, and after pressing the X button to interact with it, you will get the food that you need. This will open the door behind you, as you are given your next objective: going to reorientation.

At reorientation you will be given the option to provide different answers to the robot guard in the room, and once you’ve completed said short exam, you will be granted outside time so that you, a human that still has some use in an automatized world, can go and collect some ore for the company. After collecting a pouch and a hammer, you will be ready to go and collect some ore at the deposits – you will be guided there by a hovering yellow robot. By pressing the R2 button, you will swing your hammer towards the ore deposits so that you can collect the ore they have entrapped. 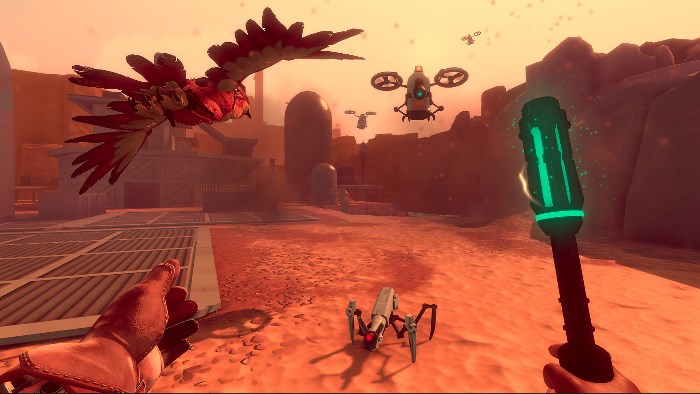 After collecting enough ore, you will be instructed to return to the ore bins so that you can deposit the ore you have collected, which will be used for creating offworld products by the company. Once you have returned the hammer to its spot just outside of the facility, you will be allowed to walk back into your room so that you can rest. It is once you wake up the next day, that your adventure will truly begin.


You will witness how a falcon has managed to attack and defeat the hovering yellow drone from before, destroying it because it was trying to harm its baby bird. The falcon, unfortunately, passes away, so you will need to grab the baby bird so that you can feed it and take care of it as needed. Feed it, wrap your hand with a piece of cloth in a nearby table, and whistle to the baby bird to call it to your side. Hold down the Square button, and you will sooth the baby bird by playing with it, letting it know everything is going to be OK – oh, and do keep the button pressed down for a minute if you want to hear a nice “ding” sound. 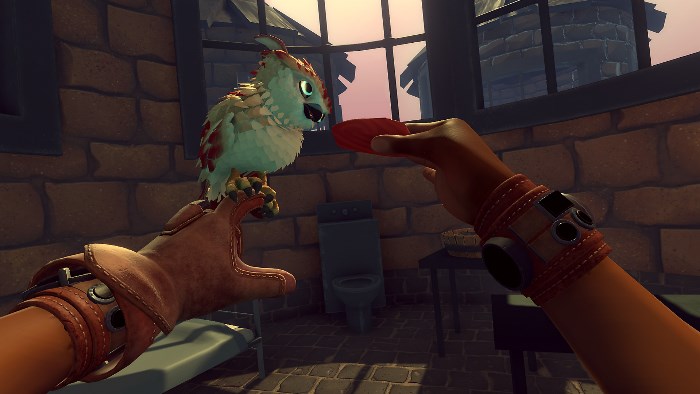 The cycle will now change, as you will, indeed, still be able to collect some ore outside with the help of your hammer, but you will also be able to instruct the baby bird to collect items that are out of your reach, or to dive from above to, say, dig its claws on a bunny on the ground to kill it so that you can collect some rabbit meat. The third time the game asks you to go to reorientation is where things start to get fun since the baby bird will help you defeat the crazy robot guard, thus allowing you to escape from prison so that you can being your journey in the wild.


A lot of things will happen once you’ve managed to escape the prison, and as you build a bond with your baby bird, it will grow stronger and become more connected to you. At one point you will realize “months have passed,” and the baby bird will be a baby no more, stretching its mighty wings as it becomes an even more powerful ally in your fight to end with the oppression of the machines as you liberate location after location, using stealth and the tools you gain access to in order to disarm the mechanisms that keep your falcon from being the battle bird of prey it deserves to be.

Falcon Age includes a full trophy list with a Platinum trophy to unlock. You will get trophies for things such as crafting a goat snack or a chicken snack, feeding your falcon one of said crafted snacks, defeating a sandwolf, completing the fetch and the bomb minigames, defeating a drone, defeating a sentry, farming for the first time, collecting all the produce, and more. It’s a varied list that will keep you busy and engaged with the game, as you complete main story objectives along with some side missions here and there.

Falcon Age is a charming first-person adventure that you can enjoy either by playing on PlayStation 4, or by taking on this experience with the optional PlayStation VR support. This is not a short experience, as you will be spending around 6-7 hours playing this one at home. Other than stumbling upon some pop-in here and there as I played Falcon Age, there is not much to complain about this one. Outerloop Games did a great job with Falcon Age, and I look forward to seeing what they work on next!

Disclaimer
This Falcon Age review is based on a PlayStation 4 copy provided by Outerloop Games.

The Benefits Of Flight Sticks For Gaming