Spintires: MudRunner – American Wilds on the Nintendo Switch offers everything in the previous standalone Spintires: MudRunner release and bundles it with all DLC and the American Wilds expansion, for a game that offers more than 30 vehicles, 60 add-ons, 10 sandbox maps, and 11 challenge maps, for a ton of content for its $39.99 asking price. And as if that wasn’t enough, Focus Home Interactive and Saber Interactive have recently released the free Old-Timers DLC for the game which adds two new vehicles from the 1950s – the Chevrolet Napco 3100 (1957), and the GMC DW950 (1952-1954) – as well as new map Rocky Hills for you to test what these new vehicles have to offer.

Spintires: MudRunner is a driving simulator unlike anything else you’ve played before. It’s not an arcade racer, so if that’s the type of game you’re expecting, you’re going to be very disappointed. What this one does is drop you into locations with some extreme terrain (and sometimes weather) conditions, all while you’re at the wheel of some rather heavy and larger than life vehicles. 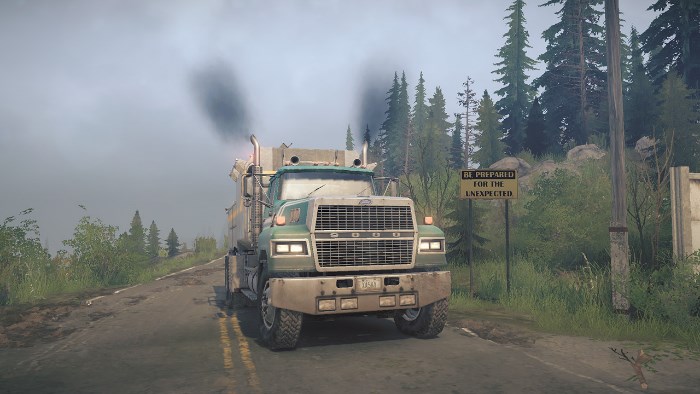 Because of this, I suggest that you first take on the game’s tutorial before you try to play the main game itself. You will move the camera around with the right analog stick and should adjust its sensitivity in the options menu as needed. Once you remove the handbrake with the B button – which is also used to activate it – you’ll be able to drive around the Ford truck used in the tutorial by pressing the ZR button to accelerate. And then, you will be thrown into your first mud covered road. To overcome this ordeal, you should activate four-wheel drive and the differential lock. This consumes more gas but is a must if you want to get out of a sticky situation. 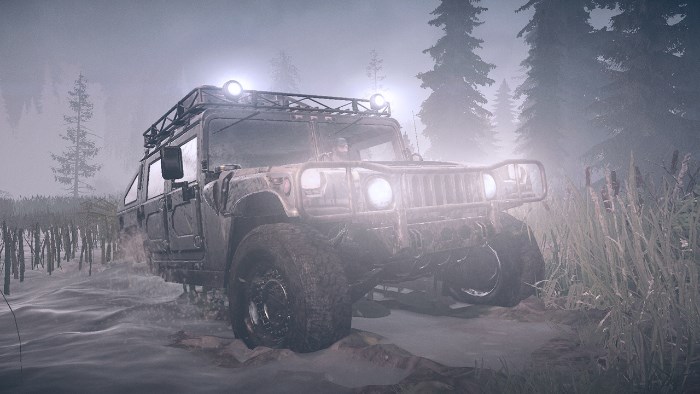 Once you’re close to exiting that first muddy road, you will unlock a new larger vehicle to which you’ll get to change to see how each vehicle handles a bit differently due to its size and overall characteristics. It is here that you will also notice how the Joy-Con HD Rumble does a great job of accentuating how your vehicle feels as you drive it over each location, helping to immerse yourself in this journey.

You can add different attachments and trailers to your vehicle, and these will allow you to take on different tasks. For example, you might need to collect some logs, for which you’ll need to have the right attachment for carrying some logs – in this case, short logs in particular. Since this is a physics-based driving simulator, you need to take into consideration which vehicle you’re driving, what load it is carrying, and the conditions of the area you’re driving through in order to keep your vehicle and its load in as good a condition as possible. 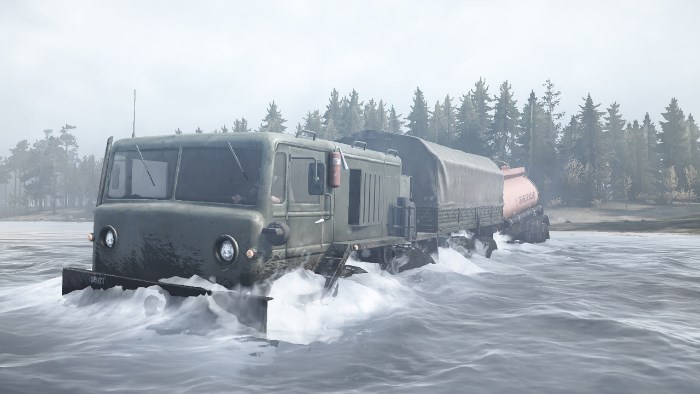 There is a ton of content to enjoy in this one, so before you dive into the single-player mode, you should work on completing some challenges since these will allow you to learn some extra stuff that is not shown in the game’s tutorial. For example, in The Rig Challenge, you will be tasked with taking a trailer and driving the rig to a small town. That’s a simple task to complete, right? Well, the overall area is not as dangerous as what you will face later on in your adventure, but it does offer a look into some extra stuff you need to understand.

You have a navigational map you can check with the – button, and what this does is open up a map where you are, where you’re going, and where you need to go to complete your objective. Damage is very important during challenges because if you damage your vehicle too greatly, you will straight up fail the challenge. There are also bonus objectives to complete which spice things up, such as not damaging your vehicle – or any other vehicle -, not driving in the opposite road lane, and using the cockpit camera to drive. 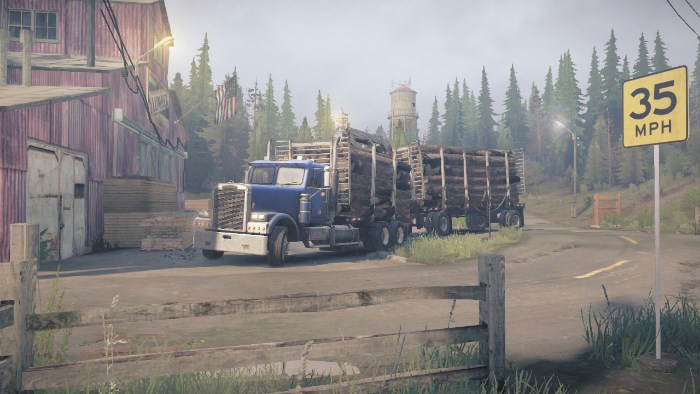 Spintires: MudRunner – American Wilds includes a list of 62 in-game achievements to aim for as you play the game. There are achievements for unlocking all garages in each location, for reaching all vantage points in each area, for knocking down a set number of trees, for driving for a set distance while the handbrake is activated, for using your winch to drag another vehicle for 50 meters, for receiving 500 points or more of damage from a single impact, for using a vehicle to drag another vehicle out of the water, and more. 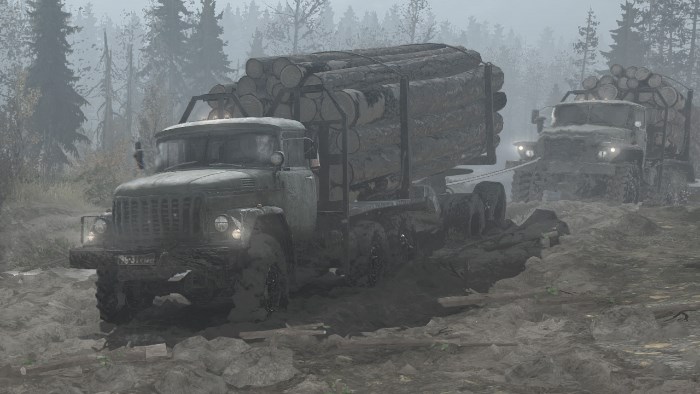 The game looks great when playing in Docked mode, and it still looks good when playing in Portable or Tabletop mode, but the graphics do take a noticeable hit in its resolution, the foliage and other objects in each location, and the lighting and shadows. This was to be expected of a 3D game like Spintires: MudRunner – American Wilds, since it is something similar to what I have experienced with other 3D games on Nintendo’s hybrid console. But even with the graphical hit, the game is still very enjoyable and offers the same overall experience than when playing the game on a TV. Framerate is also capped at 30 frames per second, with small dips here and there due to the open world nature of the game’s presentation – not a deal-breaker since Spintires: MudRunner – American Wilds is a slow game and not an arcade racer. 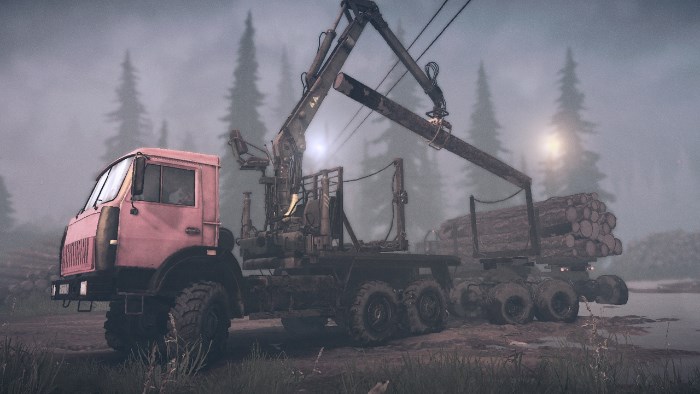 Focus Home Interactive and Saber Interactive did an outstanding job in bringing Spintires: MudRunner to the Nintendo Switch. It’s a very entertaining and challenging driving simulator that is presented as a GOTY edition of sorts, with the main game, all DLC and the American Wilds expansion rolled into a single download or retail cartridge purchase. It’s well worth its $39.99 asking price since you can end up playing this one for dozens of hours and still not have seen everything the game has to offer.

Disclaimer
This Spintires: MudRunner – American Wilds review is based on a Nintendo Switch copy provided by Focus Home Interactive.