Sniper Elite V2 was originally released by rebellion back in 2012 for the the PlayStation 3, and for the Nintendo Wii U in 2013. This new take brings us enhanced graphics, textures, effects, and lighting, all DLC included for free, a photo mode for you to capture and share your images (which you can activate by pressing down on and holding on both analog sticks at the same time), and for the Nintendo Switch version, enhanced motion controls thanks to the features of the Joy-Con for Nintendo’s hybrid console.

In Sniper Elite V2 Remastered you are tasked with turning the tide of World War II by stepping into the shoes of US Lieutenant Karl Fairburne, a sniper sent straight into the center of Berlin in 1945. Turns out that German scientists are hard at work on the V-2 missile as a last-ditch effort to try and overcome the efforts of the allied forces. Lieutenant Karl Fairburne must, therefore, either eliminate the scientist that are dangerous for the cause while trying to save those who are considering defecting to the United States, all while trying to stay alive as a one-man army using stealth and cover as much as possible with his trusty sniper rifle by his side. 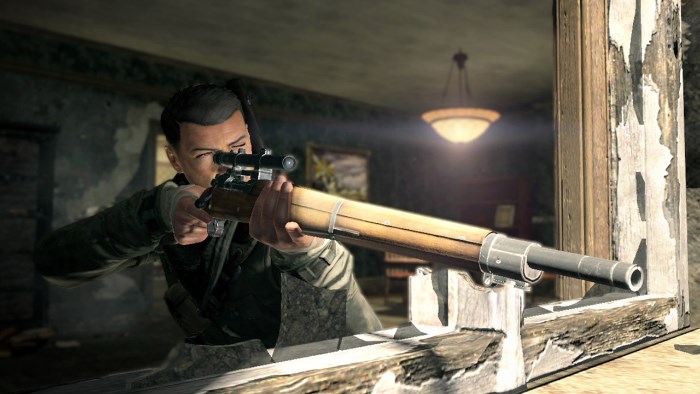 As for the game’s controls, you can move your character around with the left analog stick, and sprint by pressing down on said stick, and can look around with the right stick, which you can also press down on to activate your binoculars. You will take aim by pressing and holding down the ZL button, and can fire with the ZR button. If you press and hold the L button you will enter scope view. After this, you can then zoom in and zoom out by pressing up or down on the D-Pad. The D-Pad can also allow you to select the sniper rifle or cycle through your secondary weapons, as well as cycle through the items you have on you. Once you’ve selected the right item for the job, you can use it with the R button. You can change your stance with the B button, and can reload your weapon with the X button – although you can also toggle auto-reload in the options menu. Got all that? 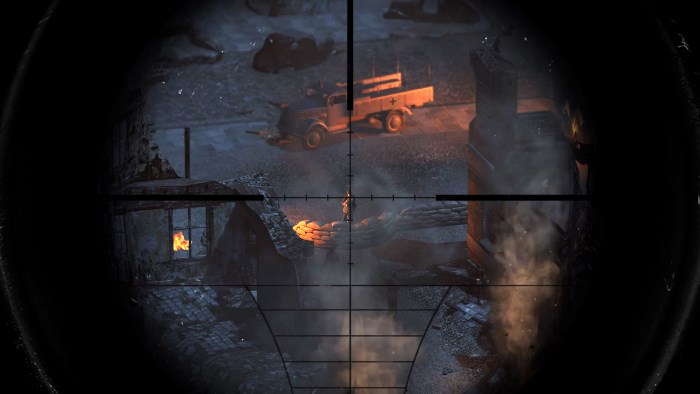 Before you start the game, there are a few extra things to consider. You have to see which difficulty setting you want to play in, as there are four available options. You can select Cadet, in which you will fave a light challenge with no bullet ballistics; Marksman in which the challenge is ramped up a bit as you deal with simplified bullet ballistics and strong enemies; Sniper Elite in which you’re in for a rough fight with realistic bullet ballistics and deadly enemies; or Custom in which you can tailor your experience by changing the enemy skill (rookie, veteran or elite), the ballistic realism (simple, limited or realistic), and the tactical assistance (none, moderate, and full). Ballistics is related to how each shot is affected by wind, velocity, gravity and other elements, forcing you to make adjustments as needed. 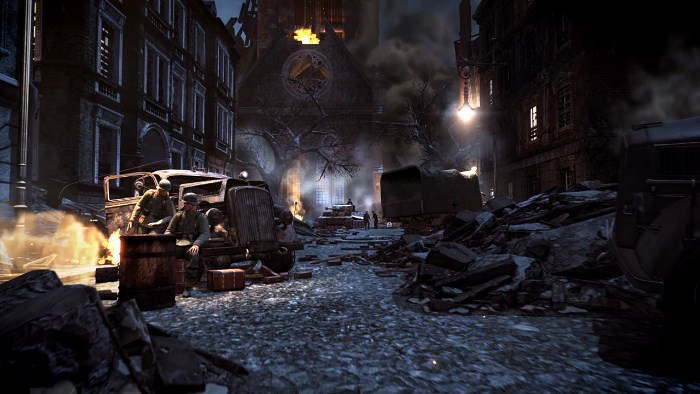 And then, there is the bullet cam. What the bullet cam does is show you in great detail how a bullet hitting an enemy wreaks havoc over its body. As this is rather graphical, and since not all players are going to like it, you can go into the options to change the bullet cam frequency from Normal to Reduced or Minimal. If, on the other hand, you’d like to see more of the bullet cam, you can ramp up the setting to Increased to see how your bullets are just as deadly as you imagine. 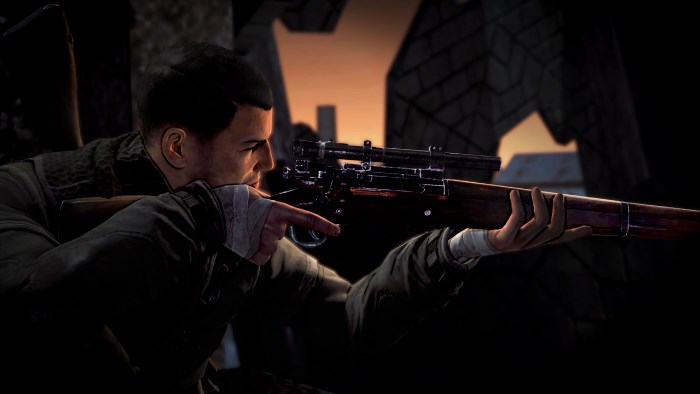 The prologue level will serve as a tutorial, giving you bite-sized sections in which you’ll follow specific instructions so that you can learn the basics for the game. You will learn to use your binoculars, about crouching to slowly move around and reduce the noise you make, about going prone to go through tight spaces, as well as to improve your aim since you’ll be able to steady your aim and take a better shot, how holding your breath will also help with this, that booby trapping a body might make the difference when you’re trying to make your escape, and to always be on high alert. You should also know each stage has some extra collectibles for you to find, so keep your eyes open for any bottles or gold bars hidden around each area! There are 100 gold bars and 37 bottles to find to 100% the game. 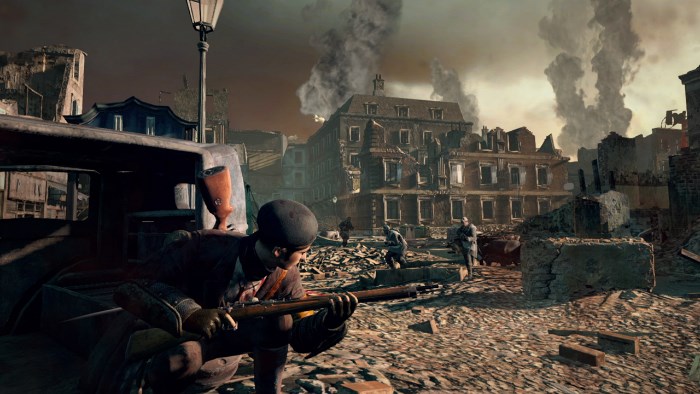 Sniper Elite V2 Remastered has a large list of in-game achievements for you to aim for as you play. You can unlock achievements for doing things such as getting a scoped headshot from over 150m, killing an enemy while your rifle fire is masked by a loud sound, sniping an enemy through his eye (for the aptly named Deadeye achievement), holding your breath for a cumulative time of half an hour, killing 100 enemies with explosions, sniping 100 moving targets, sniping two people with a single shot, completing a mission without being shot, resuscitating your partner ten times in cooperative mode, completing a mission with 100% accuracy while using only rifles, and more. 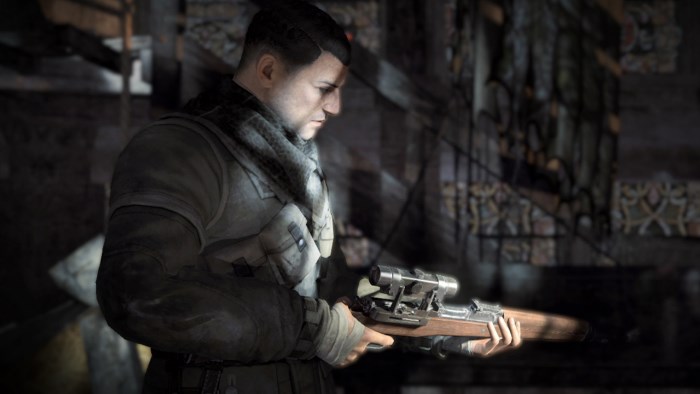 Sniper Elite V2 Remastered is a solid enhanced port of the 2012-2013 game, brought to a new audience on the Nintendo Switch. The game runs well on Nintendo’s hybrid console both when playing in Docked or Portable/Tabletop mode, offering a single-player campaign that will take you 8-10 hours to complete based on the difficulty level you select and your skill in stealth-based shooters. On top of this, you also get a chance to play in co-op either locally or online, as well as taking onto multiplayer sessions – again, locally or online -, all while also being able to take on the four previously DLC missions that have now been made available right from the start on Nintendo Switch under the challenge menu. If you don’t mind the “slower than FPS shooters” action, then you’re going to have a lot of fun with this one!

Disclaimer
This Sniper Elite V2 Remastered review is based on a Nintendo Switch copy provided by Rebellion.