SEGA AGES Alex Kidd in Miracle World was made available on the Nintendo Switch on the same day as SEGA AGES Gain Ground (which we’re also reviewing), to become the newest entries in the growing series. Alex Kidd in Miracle World originally released on the Sega Master System console way back in 1986 in Japan, and in 1987 in the rest of the world. The game was actually a built-in release that you got along with your system for several years, so those that got a new console instantly had a game to play. 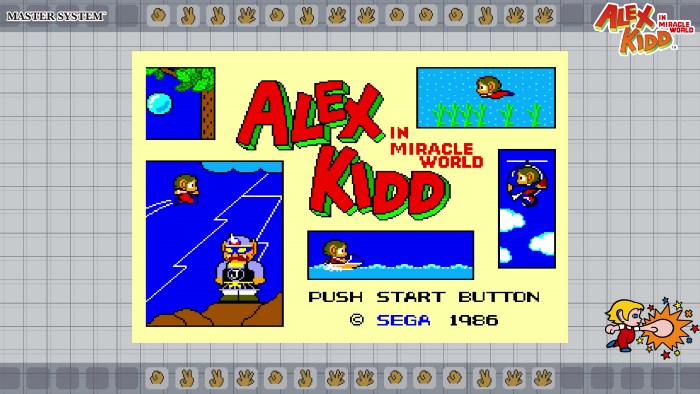 It is a 2D platformer in which you play as the titular Alex Kidd, who lives in planet Aries. He is a master of Shellcore, an ancient art that has provided him with a stronger body, an emboldened mind, and a pure heart. One day he finds a man who is dying, who manages to tell him that the city of Radaxian is in grave danger and in urgent need of help. Before passing away, he gives Alex a piece of a map and a mysterious medallion. 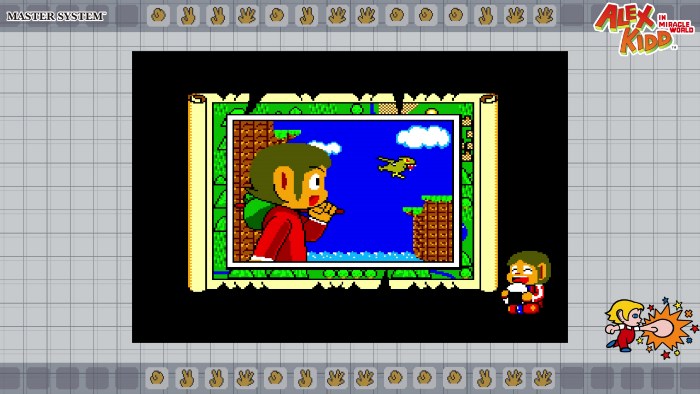 You will control Alex Kidd with either the left analog stick or the D-Pad, moving him left or right as needed, and there is also the option of crouching by pressing down. You can also swim around by using the left analog stick or the D-Pad, and can press the B button to swim quicker. You can jump with the A button, and the B button is set for your attack – you can also use the Y button to attack if you feel that is a better option. Your attack will consist of a punch that can be used to attack enemies or punch out some rocks. 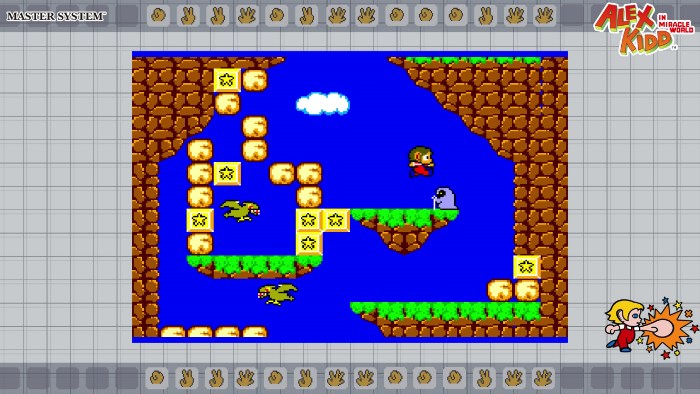 Along with the rocks you can destroy (and some you just can’t), there are also crates to open up: yellow ones and pink ones. The yellow ones can have a star, a question mark or a skull. The star one will reward you with either a small or a big bag of coins. The question mark ones are mystery boxes, which could have something useful for you but could also be hiding an enemy. The skull box will unleash a short curse on Alex. The pink skull box, on the other hand, will unleash a ghost. As for the pink picture box, there are five variations, and none can be broken, but they do hold an important sequence.


Along with the regular enemies, you will fight against during your time with the game, which include birds, frogs, fish, scorpions, bats, monkeys, sea horses and more, there are also three henchmen that will get in your way. To defeat them, you will need to play three rounds of Janken to try and beat them. What is Janken? Why, it’s a fun game of Rock–paper–scissors! As you probably remember, in this game rock beats scissors, scissors beat paper and paper beats rock. As long as you win two out of the three rounds, you will get to move on to the next stage – just be careful because if you lose you’ll be turned into stone (losing a life in the process). 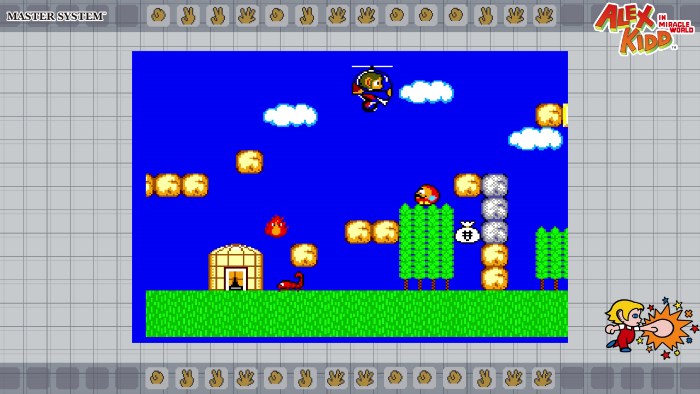 With the money, you collect you can visit the shop to purchase some vehicles for your journey. There is a motorcycle you can purchase and use to cut straight through an enemy or breakable object in your path – literally straight through since the motorcycle can only move forward. There is also a personal helicopter you can get to ride around the sky, you know, as long as you take good care of it and don’t end up hitting an enemy or crashing into an obstacle!

There are also other items you can collect or purchase during your journey, such as a teleporter powder that will make you invincible for a few seconds, a power bracelet that gives Alex a shockwave attack, an extra life, a cane that grants the power of flight, or a magical barrier that can protect you from a single hit. There are also some medallions to collect, a letter that you will need to obtain in order to progress in the game, a magical stone that will be used in a puzzle, and the magical crown you obtain as the final item required to complete your adventure. 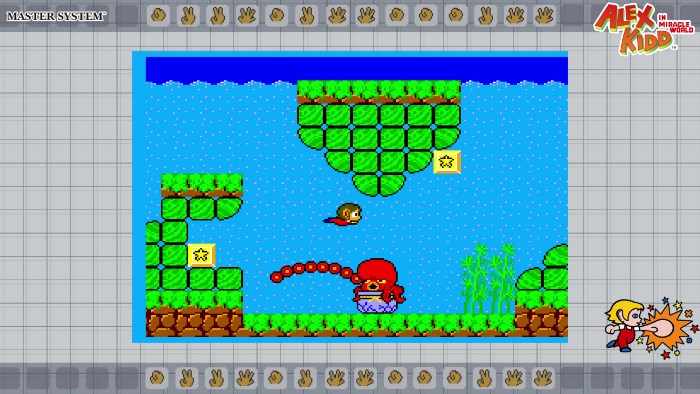 New to this release is the AGES Mode version which allows you to continue after getting a game over, as well as with the game’s background music made available in a FM synthesizer version that is very good. You also have a rewind option that can be activated with the ZL or ZR allows you to rewind time by five seconds if you make a mistake, but this will keep your replay data from being saved, and the score you get will not be registered in the online ranking. If you want to take on the original version of the game, that is also available to you. You can also take on two time attack challenges for the Petit-Copter and the Castle Quest labyrinth style stage to see how fast you can complete them.

And as has been the case for other SEGA AGES games released for the Nintendo Switch, you can select the display mode for the game between normal, fit, full, dot by dot or vintage, as well as the display effect between off, scan line, smoothing or scan line and smoothing. You can also save your game by pressing the + or – buttons and selecting a save slot to record your progress up to that point. Thanks to this, you can also load a save if you need to, which is usually after you’ve made a big mistake. 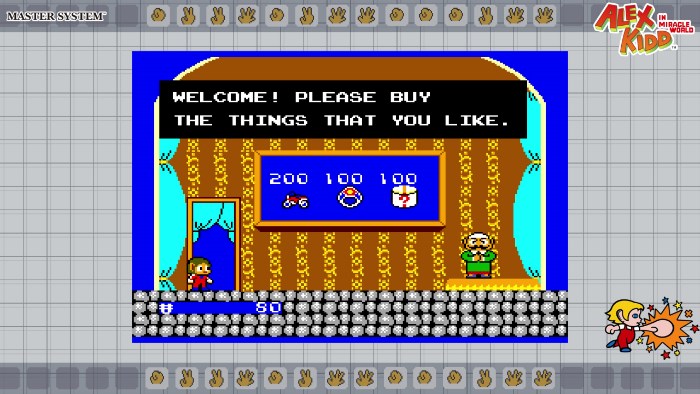 Alex Kidd in Miracle World is a fun old-school 2D platform that will take you around 2-3 hours to complete at most. The SEGA AGES release is the definitive version, offering a revamped soundtrack, different display modes, save states, and more. The adventure might feel a bit linear as a 21st-century release, but as long as you understand the retro nature and value of the game, you’re going to have a good time.

Disclaimer
This SEGA AGES Alex Kidd in Miracle World review is based on a Nintendo Switch copy provided by Sega.