Gato Roboto from doinksoft and Devolver Digital is an excellent black and white distilled Metroidvania experience on Nintendo Switch that you have to try. Find out why in our Gato Roboto review!


The Metroidvania genre is one that has been represented properly on the Nintendo Switch, with dozens of great releases that are going to scratch that old-school 2D Metroid itch. But do any of them feature a black and white adventure in which you control a cat? Because for Gato Roboto you are Kiki, who must go into a research facility after a distress signal was picked up by its owner, Gary, who was out on patrol. Gary is unfortunately stuck in the ship, so meow it’s your time to shine! 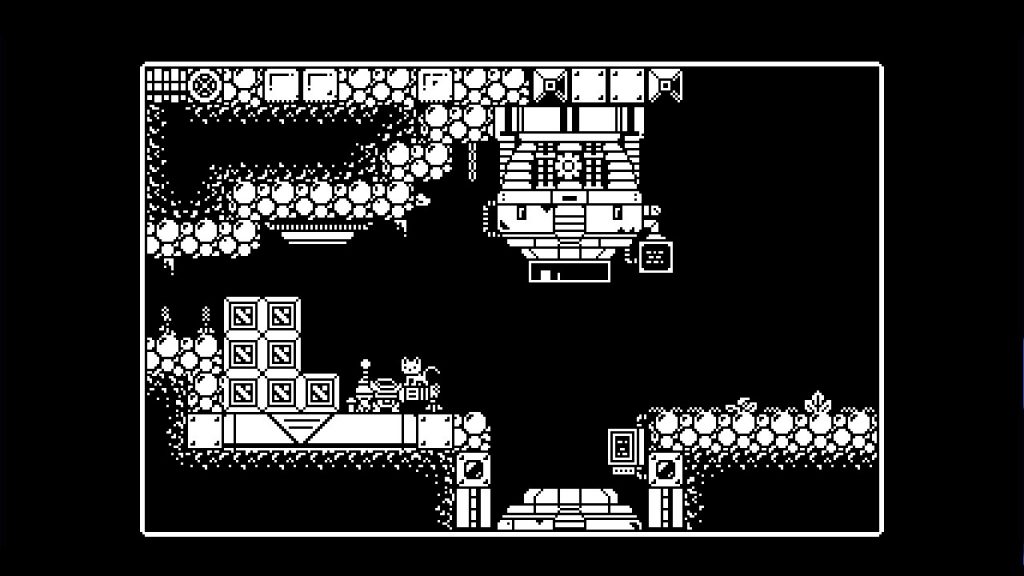 You’ll be able to run with the left analog stick or the D-Pad, with jump set to the B button. Since Kiki is a cat, you’ll be able to wall climb for a bit and jump over obstacles that would probably prove to be too much for a bounty hunter without the right upgrades. As you explore each area, you will start to fill up the mandatory Metroidvania map, trying to find something that can aid you on your adventure. Since you’re just a cat, you won’t be able to go everywhere… until you find a special platform that will grant you access to an armed and deadly robot suit. You’ll then be able to attack with your pistol with the Y button, and you’ll be able to get out of the suit with the X button when your cat powers are needed.

Once you find the suit, your real journey will begin. The moment you step out of the room where you first suit up, some rather aggressive flying enemies will start to come at you. Defeat them and exit that room, and you’ll notice that nasty worms, dangerous hives, and even giant (for cat standards) frogs have come out to play. Because of this, you better use your gun to open any doors in the area so that you can start to collect some valuable power-ups that will help you stay alive. You have a set number of hit points, and the more you have, the better your odds of survival. So if you were to, say, find a healthkit to boost your overall health by one – while also healing you in full –, that would probably be good news. 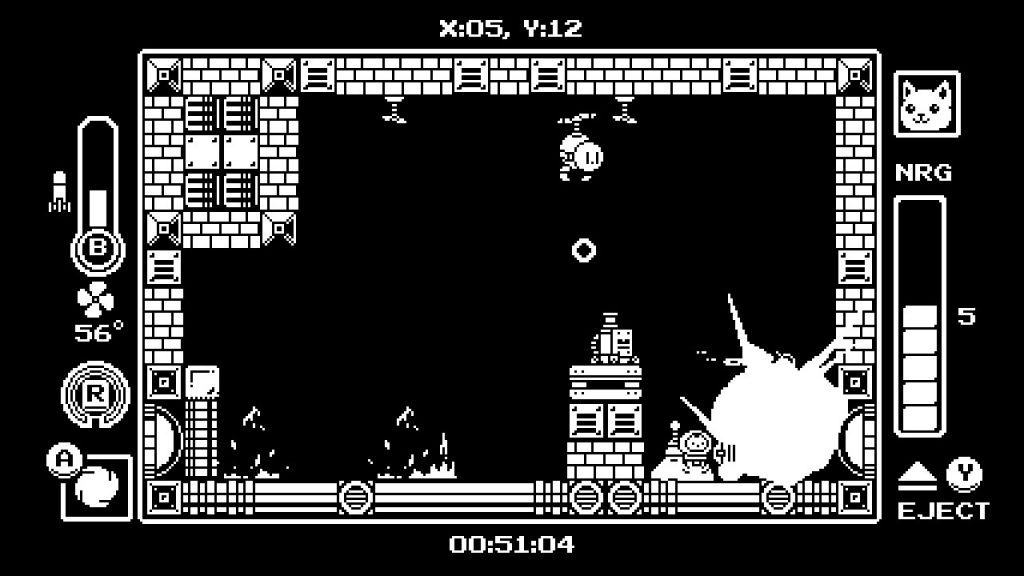 Having a robot suit is nice and all, but sometimes, Kiki in its own is just what is needed to save the day. Bounty hunter extraordinaire Samus Aran has her morph ball ability to squeeze into smaller spots that will lead her to new areas. As for Kiki? Well, all that Kiki needs is its feline nature! Exit the suit, and you’ll be able to run into a small spot you’ll easily squeeze into. Odds are that after some platforming action, you’ll end up finding a new power-up for your suit that will, in turn, allow you to go deeper into the planet.

Early on you will run into a rocket power-up which, along with dealing considerable damage to your enemies, can allow you to boost up and gain some extra air for a bit by entering its blast radius – sound familiar? To keep players from spamming this most excellent tool by pressing the A button over and over, Gato Roboto has added a temperature bar that will go up with every rocket you fire, so if you don’t time things right and end up pressing the A button one too many times in a row, you will lose access to the rocket for a couple of seconds. 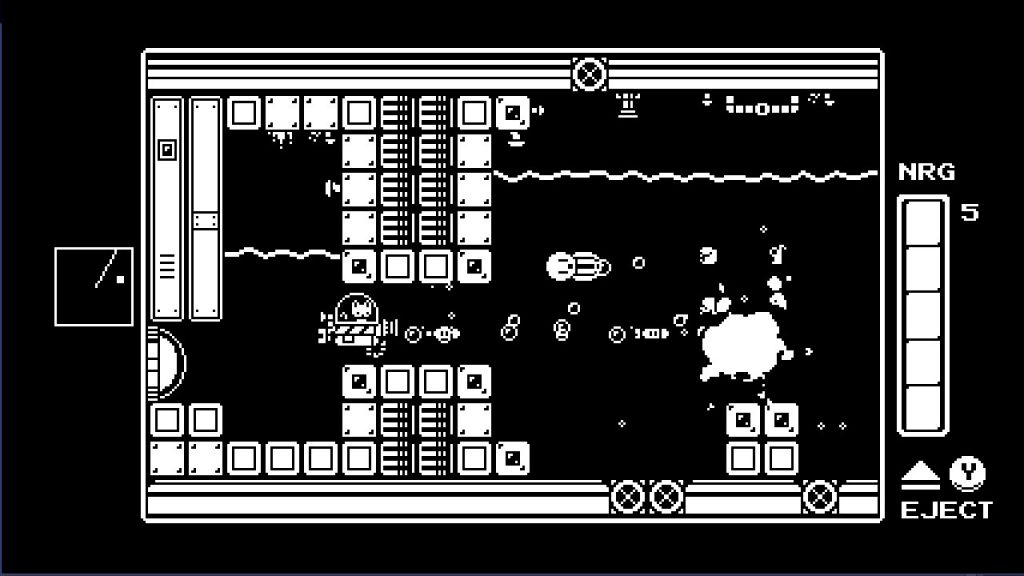 Save points, which are platforms that feature a floating floppy disk inside, will not only save your game but will also allow Kiki to suit up if it’s not already inside of a suit. If you’re riding a suit, then you’ll be treated to saving your progress while your suit is fully healed from all damage, a bonus perk that comes in handy when you’ve been out exploring the area for new power-ups, only to be hit by enemies over and over again. The save points are doubly important when they are presented right before a boss fight, since nothing helps you defeat evil like a fully repaired robot suit in which you might die, only to respawn a room away!


Speaking of bosses, you’ll run into some of them as you try to help Gary find out what is really going on at the research facility. Bosses have very distinct movement and attack patterns that you will need to figure out if you are to be victorious. Once their old-school health bar fills ups at the upper center part of the screen, you’ll need to chip away at it with your weapons while avoiding its attacks, something that is not impossible but that might be tricky if you end up not actually paying attention to things. There are also challenge rooms where you’ll face either a set number of regular enemies or even a mini-boss, so be ready! 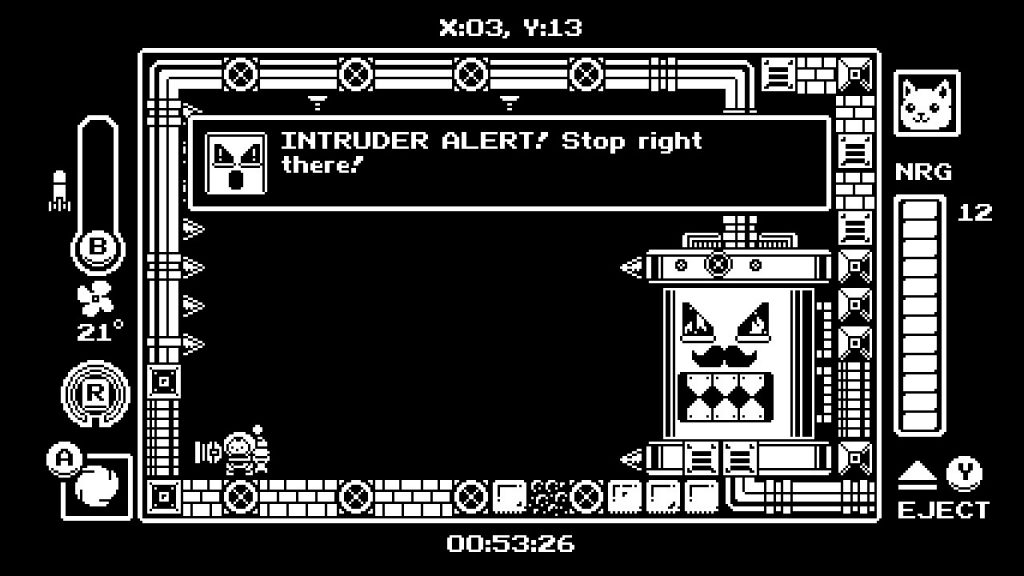 You’ll eventually reach a hub from which you’ll be able to access three new areas where there are a few objectives for you to complete before you can gain access to the final area. Each of these locations has an issue you need to solve – for example, there is just too much water in the aqueducts -, and solving all three will make it so that the all-knowing PC can turn issues into checkmarks. Once you get all three checkmarks, you’ll be on your way to the final area where all will be revealed.

As you explore the new areas you can reach from the hub, you will be able to find some cartridges for your collection. What these do is allow you to change the color palette for the game so that you can play with more than the black and white original option. The port palette changes things to a blue and orange presentation, while the goop option is for a chill black and green feel. There are different options for you to unlock, so be sure to search everywhere as you gain new abilities! 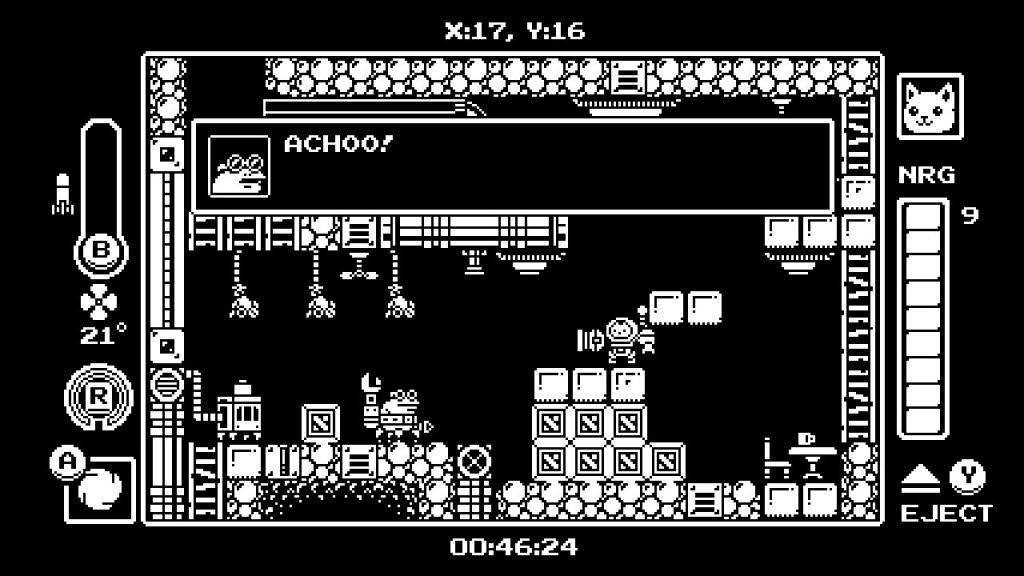 Gato Roboto is a very fun action-packed 2D Metroidvania with a feline twist that is a blast to play from start to finish. It’s an experience that distills the Metroidvania genre to its fundamental elements for a short and to the point 4-6 hour long adventure, depending on your expertise level with entries in this beloved genre. The more you explore, the closer you’ll get to the 5-6 hour mark, but exploring everywhere is good for your odds of survival since you’ll get more health for your suit to take that extra hit that might allow you to deal the final blow to a boss or two. 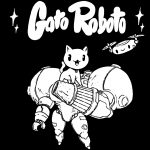 Disclaimer
This Gato Roboto review is based on a Nintendo Switch copy provided by Devolver Digital.