For DreamWorks Dragons Dawn of New Riders, you will get to play as Scribbler, a scholar who has lost his memory. He rides Patch, a new breed of dragon know as a chimeragon, with new an interesting powers that you will get to discover as you traverse this new adventure. One of your goals will be to find a way for Patch to recover his lost memories, but you will also be tasked with defending the dragons from the evil Eir, who is determined to have all dragons under her control.

Things have gone very wrong in Havenholme Island, a dragon refuge, which is why Toothless and Hiccup end up rushing back there when they spot smoke from a distance. It is then that the pair finds Scribbler, who has no idea who he is and how he ended up on the island, to begin with! In fact, it is Hiccup who ends up giving your character his name. You soon gain control of Scribbler, right after Hiccup tells you that you should check the nearby treasure chests for a shield and some weapons to help you. You will soon put them to good use, since an enemy will end up dropping a smoke bomb, taking the egg during the confusion. 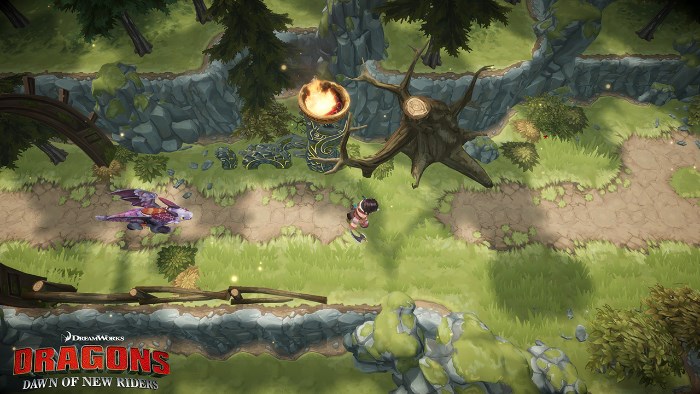 Since this is an action RPG, when on land you will move your character around each area with the left analog stick, and attack with the Y button – you can also hold down the Y button to charge up your attack to deal more damage. The B button can be pressed to dodge an incoming attack, or you can hold it down to run – this is also the button you can use to interact with things. When in battle, you can hold down the ZL button to block and can switch your weapon with the ZR button. You can switch between controlling Scribbler and Patch by pressing the L button as needed. If you have a potion on you, you can use it by holding the A button. You will also gain access to a map, which you can open with the – button, to see where you are and where you need to go.


If you are in the air, the left analog stick will still help you move your characters around, but you will be able to move the camera around with the right analog stick. Your dragon will be rolling around left and right with the L and R buttons, respectively, and you can flap your dragon’s wings with the ZR button to speed up. If, on the other hand, you need to slow down a bit, you can apply a handy air brake maneuver by pressing the ZL button. Once you’re ready to land, you can do so by pressing the X button. 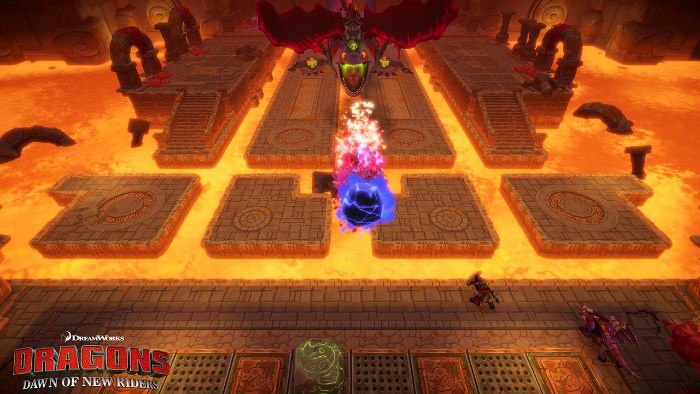 Patch has many useful abilities that will prove helpful during your quest. It can, for example, use his ice breath to freeze water, which will allow it and Scribbler to cross over small spots to carry on exploring each area. By using his ice breath, you will be able to explore every corner of an area, which will usually lead you to a treasure chest or two if you take some extra time to go down every path. Later on, Patch will gain new abilities, but I’m not going to spoil them here so that you can learn about them as you play.


With the axe found in one of the treasure chests and the shield found on the other, you set out on a quest to recover the stolen dragon egg. The next section will serve as a short tutorial, showing you the basics. You will learn that there are more treasure chests to interact with, some of which are a bit hidden away from the main paths. These might contain herbs such as dragonbane, scaly snapdragon or a firecomb flower, or you might find an ore piece or two – gronkle iron, thorstone or magmarok. You can also get herbs by slashing away at the bushes in your path, by breaking boxes and barrels, or by defeating enemies – same goes for ore (at least for the boxes and defeating enemies part). 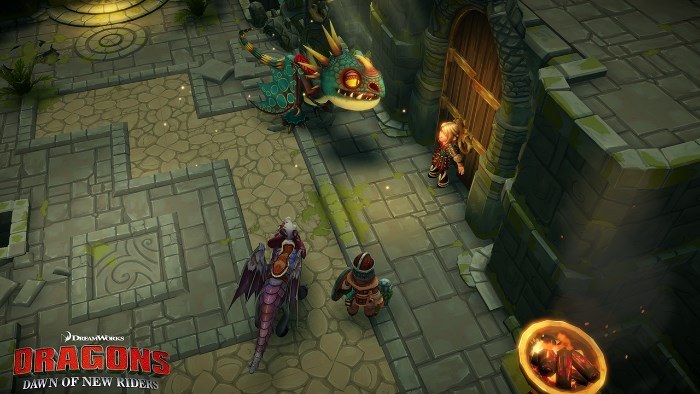 
Gobber, on the other hand, will be the one that can make good use of the ore you collect. The ore can be used to improve your weapons so that they can deal more damage, or you can ask him to craft new helmets, shields or armor to boost your defenses while also giving you some extra stat boost. He has, for example, a winged helmet for scribbler, and it seems that the wings on its sides are not only for decoration since they will also grant Scribbler a boost to his speed! OR perhaps you would like to use a considerable amount of your resources to have him craft a patch scale cuirass that will grant you some extra elemental protection. 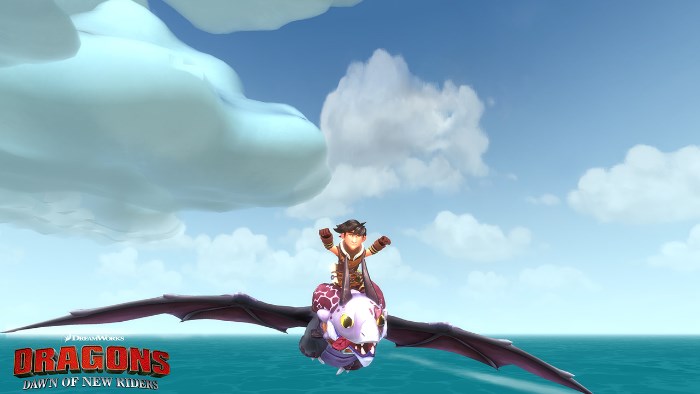 DreamWorks Dragons Dawn of New Riders is a fun video game that ties in a bit with the recent How To Train Your Dragon: The Hidden World, the third movie in the series. It sets out to tell a new story while anchoring things in the How To Train Your Dragon universe, having players interacting with the beloved cast of the franchise. The game is a colorful and fun adventure in which the difficulty has been dialed back so that younger gamers can have a go with an action RPG on Nintendo Switch that is a blast to play.

Disclaimer
This DreamWorks Dragons Dawn of New Riders review is based on a Nintendo Switch copy provided by Outright Games.