In this 2D roguelite procedurally generated Metroidvania, you are tasked with stopping the deadly entity known as the Megabeast, a powerful moon-sized orb of flesh, eyes, and mouths that is set on unleashing its offspring unto the world, as an unstoppable killer plague. You will do what you can in each run, adapting to the hand you’re dealt, the platforming sections you’ll take on, and the enemies you will need to defeat. 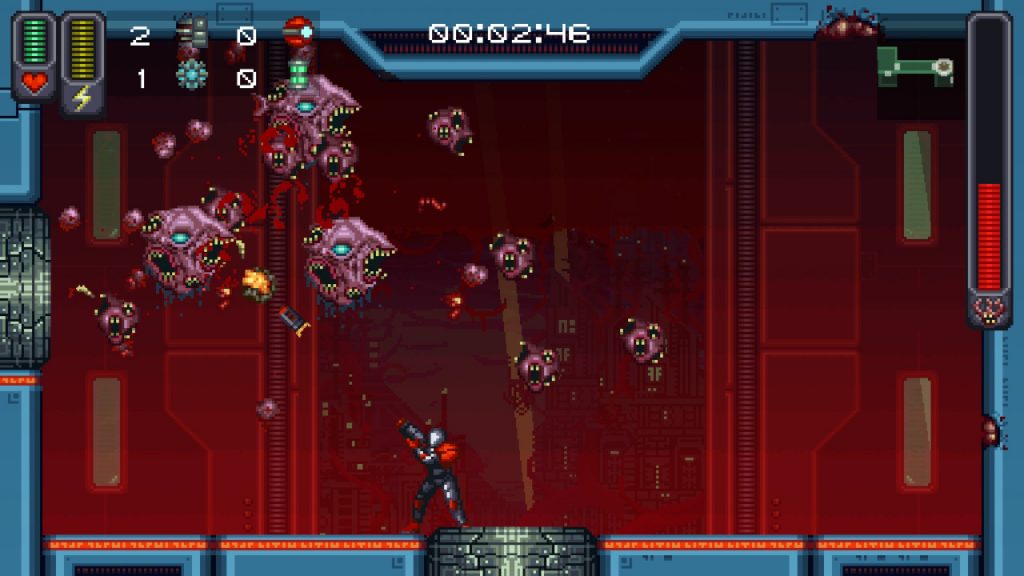 The gameplay is what you would expect from a 2D 16-bit styled Metroidvania. You can run, jump, aim, and attack as needed, making the most of the weapons and items you have secured during that particular run. As I mentioned, this is a procedurally generated Metroidvania, and that means there is a ton of content to experience. There are many potential combinations you will run into, so you will need to adjust your strategy on the fly in case you don’t get that one item that was extremely helpful during your previous run. Each run will provide a bite-sized Metroidvania experience, in an almost speedrun infused way – if you do things right, you’ll be able to complete a run in around an hour and change. 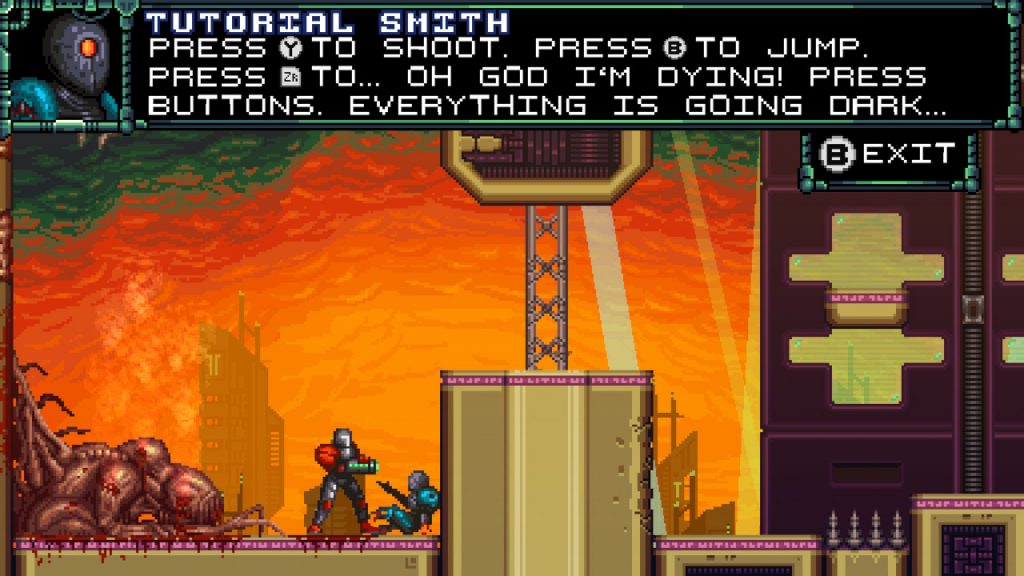 As you start the game, you will run into Tutorial Smith, a dying robot that will show you the basics… you know, before everything goes dark for him. Thanks to his final effort, you’ll learn that you can shoot with the Y button a, jump with the B button and that the ZR button does… something. He dies before being able to tell you, but you can use that hint to see that the ZR button allows you to aim up diagonally, while the ZL button makes it possible to aim down diagonally. You can also do this with the left analog stick or the D-Pad by pressing the corresponding direction, but using the ZL and ZR buttons is more accurate. There is no morph ball in this one, but you will find a power-up that will allow you to turn into a fast-moving spider that can also shoot. 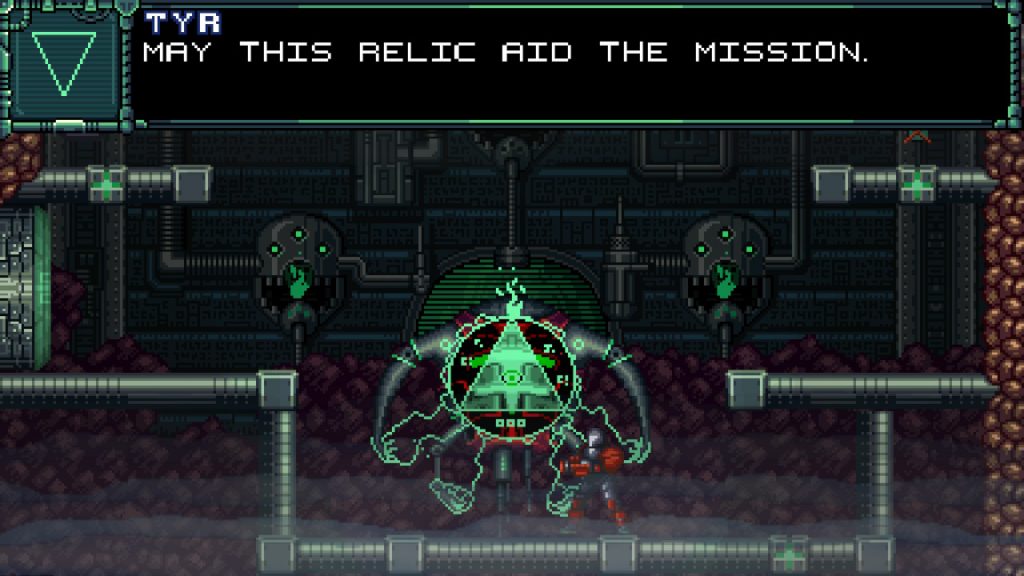 The game being procedurally generated Metroidvania, it wears its influence proudly on its sleeve. You probably thought of Super Metroid as you watched the trailer above, right? This game offers a ton of content to play due to its procedurally generated nature, with over 4 billion potential room layouts. That’s a big number, and when you add the large variety of enemies and the many items you can find, you won’t have two runs that feel or play the same way. Not everything is available right from the start. You will unlock new items that will appear in subsequent runs such as, for example, the power jump which you get from defeating the Beak Lord boss. 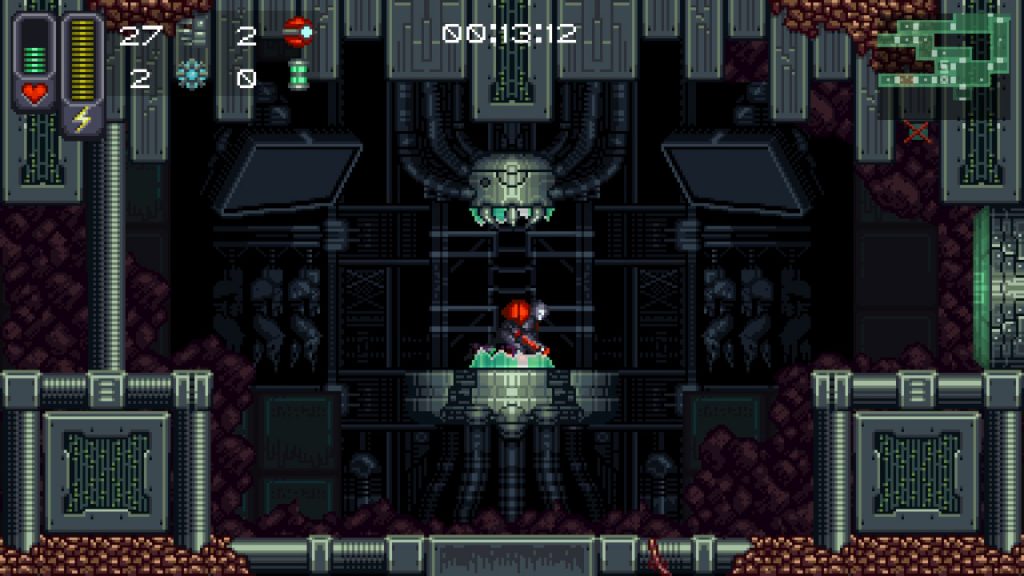 Defeating the Beak Lord boss is actually one of the many achievements you can unlock as you progress in the game, and it is thanks to unlocking said achievements that news stuff will be added to future runs. Along with the one mentioned for defeating the Beak Lord boss, there is also one for defeating 100, 1,000, and 10,000 enemies, for donating X amount of scrap to shrines, for uncovering every square on the map in a single individual run, for trading three of each type of archaic scrap to allies, and more. 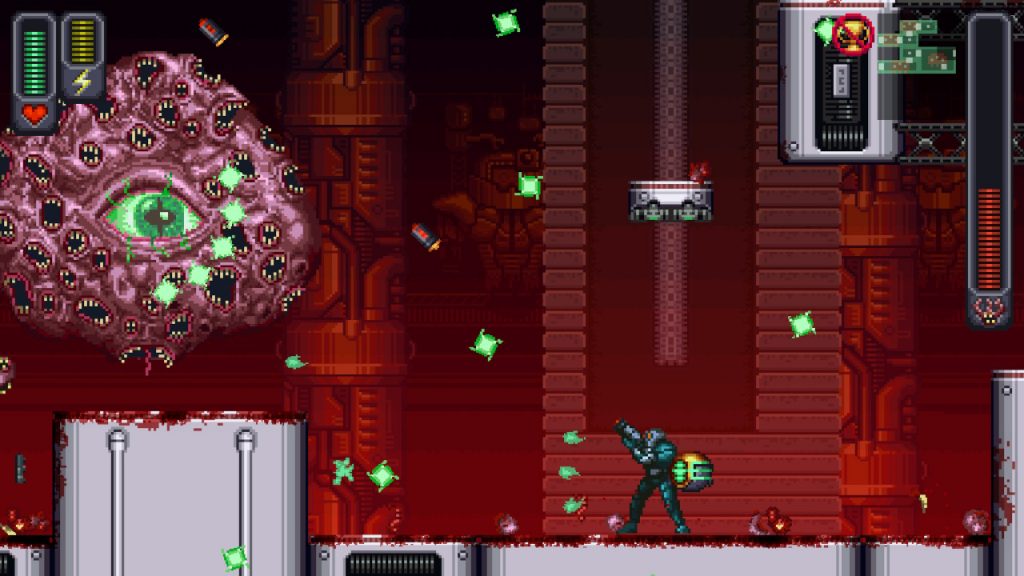 You will gain health recovery pickups – which look like green hearts – as you defeat enemies, and you should always make sure you grab them since your health can be easily diminished from being damaged a few times. As you destroy enemies, you will also gain archaic scrap of different colors, which can be donated to shrines and forged by allies into useful items. There are also items that will increase your overall health or others that will increase your overall energy. You should pay attention to your map so that you can see if there’s an indicator that marks an area with an extra special item to collect.

Indie developer Matt Bitner has continued to work on A Robot Named Fight! since its Steam release back in 2017, improving on the overall experience by rebalancing stuff, adding extra content, and fixing bugs here and there, to make the game better and better. The game you get to play on Nintendo Switch today is certainly different than what we got on Steam a couple of years ago, and it’s also been greatly improved from when A Robot Named Fight! launched on Nintendo’s hybrid console a year ago.


Because of this, A Robot Named Fight! is now a bigger and better experience compared to its launch version. Oh, and the game now includes a deathmatch mode in which you can battle against other players in 2-4 player split-screen. This mode includes over 50 artifacts and five new player vs. player (PVP) arenas, as well as the option of setting up custom rulesets and map rotations. On top of that, the update – which is now live for the Nintendo Switch version – also adds some extra content for the main campaign experience, once again expanding what you can find. 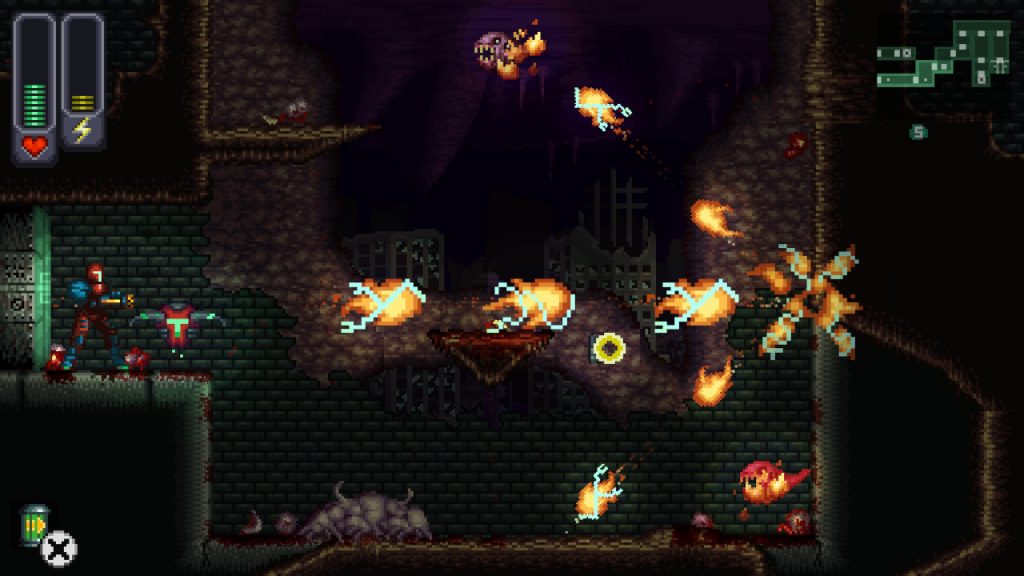 If you’re a fan of the Metroidvania genre, then I highly recommend that you get A Robot Named Fight! on the Nintendo Switch today. It’s only $12.99, and your purchase gives you a game with a ton of content on offer, and more on the way in the near future. The game today is bigger and better than ever before, offering over 100 items, more than 60 enemies, plenty of bosses, and billions of potential procedurally generated scenarios that can be completed in an hour and change. The more you play, the more in-game achievements you will obtain, and the more new content you will unlock for future runs. I loved A Robot Named Fight!, and hopefully you have as much fun as I did when you play it on Nintendo Switch!

Disclaimer
This A Robot Named Fight! review is based on a Nintendo Switch copy provided by Hitcents.

Skelly Selest Out Next Week On PS4 And Nintendo Switch