No matter how you look at it, there is nothing nice about stealing and unfortunately for a princess, she’s going to have to learn this the hard way, when “that guy” claims her possessions for himself and sets off with them.

Desiring to reclaim what is lost, Super Weekend Mode is a cutesy looking game where hearts must be caught, bunnies must be crushed and the bad need to be shot. We will see a princess chasing a thief through the labyrinths of despair, in a bid to get her belongings back.

This is a double review for Super Weekend Mode. Ceidz and EdEN played the game, and this review presents what they both had to say.

As you start the game, you get to select from the available outfits for the character, each having different characteristics and effects on the game, such as having easier or harder boss fights, or even a startup shield. If you’re eyeing at this game, then you’re most likely a trophy hunter, so for you I’ll mention straight away that there’s only one trophy for trying the hardest difficulty setting and it is awarded for STARTING a game at the hardest difficulty, so that’s one Gold Trophy sorted out in a few seconds! Other than that, my suggestion would be to start on Easy in order to reach the Third level trophy, then restart at the Normal setting to get the trophies linked to the points total – if needed at all since you could get the points while playing on easy if you do it all in one go.

I’m not messing around when I’m saying this is an insanely quick Platinum to achieve!

As for the gameplay, this time we are in a vertical shooter, in which you are (automatically) firing at a monster (if you select the auto-fire option) while trying to collect hearts that drop from the top of the screen. The catch here is that there are two paddles at the bottom of the screen and each of the shoulder buttons controls the left and right paddle, respectively. There are two positions on each of the paddles (left or right), and controlling them independently was a real brain twister since you’re moving them asymmetrically. 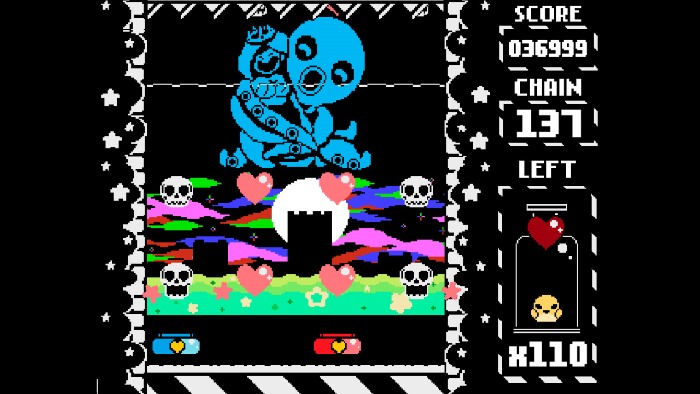 Collecting hearts flawlessly raises your chain counter, which leads to getting a better score. There are two trophies requiring you to reach specific high score milestones, but they are easy to achieve while playing in the Normal difficulty. There are also bunnies that fall (for reasons), as well as skulls which must be avoided at all cost. Honestly, I would have liked to be in the brainstorm session that led to the creation of this game, since the different elements that come together for this gaming experience are quite random.

On the Vita version (which I played first), I thought that the loading times were really too long given the graphical style, but once you’re in the game itself things progress at a steady pace without any issues. After achieving the two Platinum trophies for Super Weekend Mode, I still hadn’t understood what the game title meant in relation to gameplay. Weird, right? 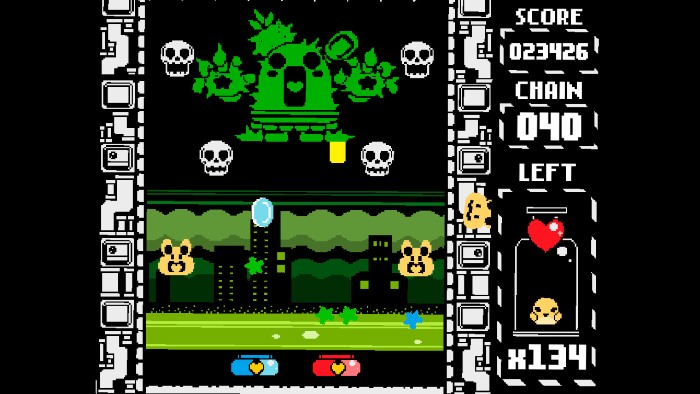 As Ceidz has mentioned, this one is a shooter of sorts in which you control two paddles at the bottom of the screen which move with the L1 and R1 buttons. One press of that button moves the corresponding paddle from its position to the second spot it can occupy, and vice-versa. Collect the hearts, avoid the skulls, and you’re off to a good start.

The bunnies that Ceidz mentioned are actually a tricky element in the game since you have to bump them from the side to defeat them, all in time with the music. So while you try to grab all the hearts that come down from the top of the screen, and avoid the skulls which can kill you with one hit, you also need to plan to move the paddles to hit the bunnies from the side. 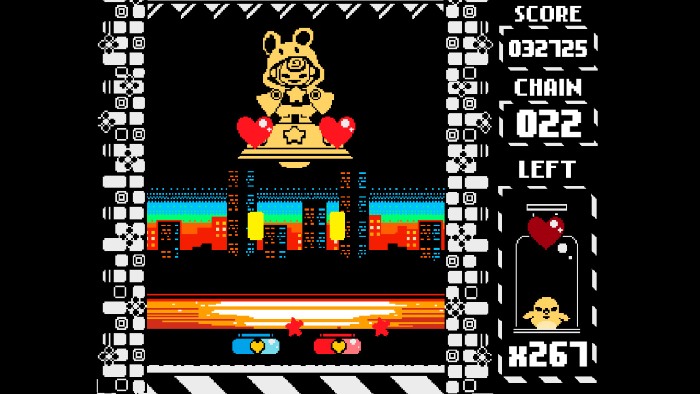 Each time you miss an objective, like hitting a rabbit from the side or not grab a heart before it hits the bottom of the screen, the playing field will shrink, bringing you one step closer to defeat while lowering the time you have to react to the elements that will continue to pour down the screen. At least you get a second where there is no action so that you can plan accordingly before the hearts, skulls, and bunnies continue to fall!

The game features a solid 8-bit style chiptune soundtrack that complements the action. Each boss fight has different stages, so the music will change accordingly once there is a stage shift, which you will know is happening because the boss will also change its look and become more menacing.

The trophies in this one are very straight-forward, and as has been the case with several of the games released by Ratalaika Games, you don’t need to play the game until the end to get all of them. You’re looking at nothing but Gold trophies for your efforts, so after playing for 10-15 minutes at most, you will have 11 new Gold Trophies and a Platinum in your collection. Since the game is a cross-buy release, one purchase gets you the PS4 and the PS Vita versions of the game, and since they each have separate trophy lists, one purchase (and your skills) can get you two Platinum trophies in less than half an hour. 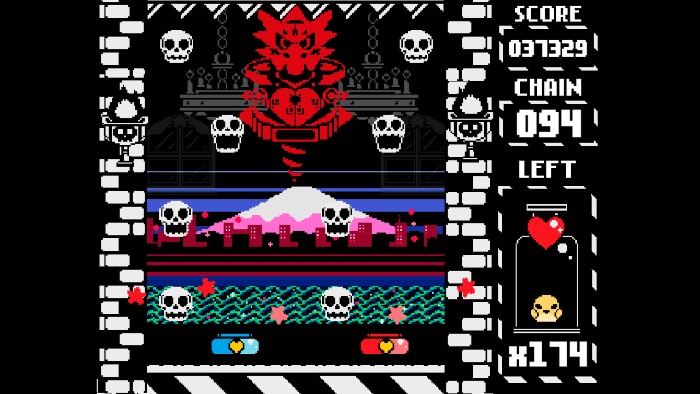 Super Weekend Mode is a fun and fast-paced shooter with a gameplay twist that you’re going to enjoy on PS4 and PS Vita. The chiptune soundtrack was a solid effort, and you really can’t beat getting two Platinum trophies for one low price, so trophy hunters are definitely going to love this one!

Disclaimer
This Super Weekend Mode Review is based on PlayStation 4 and Vita copies provided by Ratalaika Games.