Vaporum is finally out on PS4, a year and a half after a successful release on PC. Learn if this dungeon crawler is worth exploring in our Vaporum review!

Vaporum’s story kicks off with our hero waking up ashore, with no memories of what’s happened to him. The only thing he notices is a big metallic monument in the distance. Upon closer inspection, he feels a strange connection to it, and the door suddenly opens. With nowhere else to go, he ventures in to try and regain his memories and find out what this structure hides. The rest of the story will unfold through notes and tapes you’ll find while exploring, that will slowly help you understand what’s going on and your implication in all of this.

This game is a dungeon crawler played from a first-person perspective, which draws its inspiration from classic games like Dungeon Master and Eye of the Beholder. You’re navigating through corridors and rooms on a grid-based map, moving square by square as you try to find your way through. Some of the doors you’ll find will only require you to press a switch that’s right next to the door to open it, while some others will require you to solve some puzzles to find keys or to get to the switch. 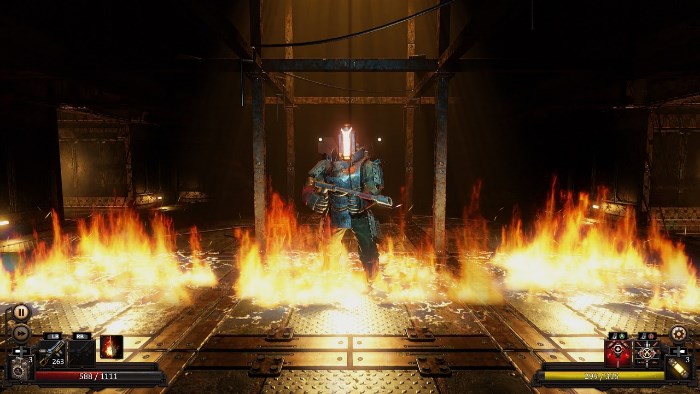 From time to time you’ll encounter enemies to fight, which you can battle with different types of weapons like a crowbar, swords, or a wide variety of guns. Depending on the weapon, you’ll be able to attack up to a certain number of tiles in front of you, mainly with guns that will allow you to attack from a bit further than the tile right in front of you, which you can hit with, say, a knife. You will also be able to use the grid map to your advantage, since moving to a different tile with the right timing will allow you to dodge their attacks.


Early on in the game, you’ll get to a room where you can choose from one of four types of exo-rig, which are enhanced suits that give your character some stat boost in things like combat or tech usage. From there, you’ll gain fumium when you kill enemies, which will be what serves as experience points that level up your rig. As your suit levels up, you’ll be able to apply circuit points on it, which can unlock different permanent stats, like increased rifle damage or blunt weapon damage. There are quite a few upgrades so you can customize your build in the way that fits your play style. Each of the stats can be upgraded five times, with unlockable skills on the third and fifth level.

Visuals of the game might not be on par with today’s first-person games, but it compensates that with the atmosphere it provides with the narrow corridors and the omnipresent mystery. I did have a bit of an issue with the sensitivity of the right joystick, which allows you to turn, where I often found myself doing 180 degrees turns even though I had slightly touched it, but that’s the one complaint I have.

The world of Vaporum is very mysterious, with small bits of information coming in as you dig deeper and deeper into the dungeon. It does a great job of grabbing your attention, at least it did for me as I always wanted to continue to find the next notes to uncover a bit more.

Although simplistic, I found the combat to be fun, especially when you get access to gadgets that can give you area of effect attacks or things like a boosted attack speed. There’s also the possibility to stop time when you encounter enemies so that you can plan your actions accordingly to defeat the monster you’re facing. Then there’s the whole gear and upgrade system that allows so many customizations that there’s a lot of replay value to be found if you want to try different builds. 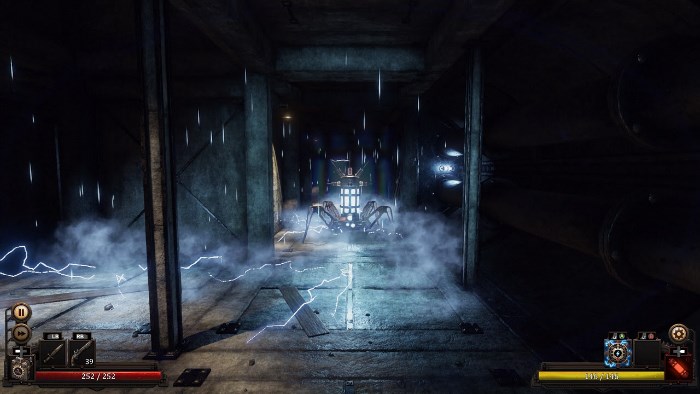 This brings me to the trophy list, which can by itself give you the reasons you need to play through the game multiple times. You’ll have to beat the game on the hardest difficulty setting, do a speedrun in under 90 minutes, beat the game in “old school mode” where there is no map to help you out, and more. Then there are a few trophies for the number of hits you deal on enemies with different types of weapons, the number of tiles you walk on, and also for finding all the lore in the game. Some of those trophies will be pure grinding, and a couple of them should prove to be good challenges as you push towards unlocking that Platinum trophy.


Final Thoughts
If you’re into dungeon crawlers, then Vaporum should be a welcomed addition to your library. It’s fun, has a lot of replay value with different game modes and builds you can do and has a great way of telling its story.

Disclaimer
This Vaporum Review is based on a PlayStation 4 copy provided by Merge Games.

Trüberbrook Out Next Week On PS4 And Switch