Zen Studios is ready with a new pinball pack for Pinball FX3 with three new tables for you. Learn more in our Williams Pinball: Volume 2 review!


After the excellent Williams Pinball: Volume 1, Zen Studios has given us a second volume with three pinball classics for the Pinball FX3 platform. Since its most certainly still pinball month at PS4Blog.net, it’s now time for me to dive into this trio of pinball tables to tell you why you should you and buy the bundle today! The three tables in this new pinball pack are Attack from Mars, Black Rose and Party Zone, each offering a very different look and feel for pinball fans to dive in with the original recreation of the tables in digital format, as well as revised versions with some added bells and whistles. 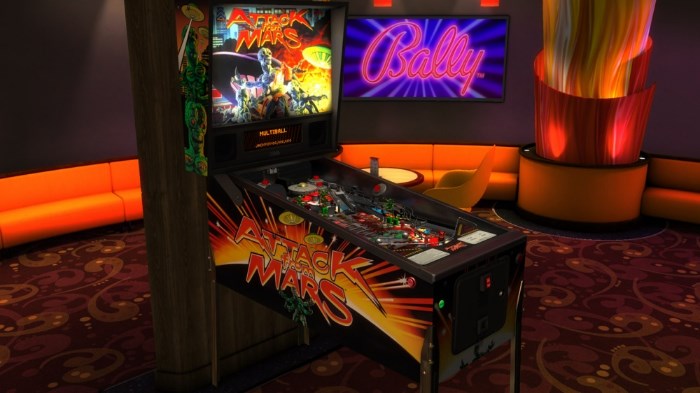 First up, let’s talk about Attack from Mars, which released back in 1995, selling over 3,000 copies. As expected, the table has an aliens from mars theme to it, with UFOs in the back, and a red, silver and green color theme to it. You will aim to lock the ball at the center orbit to activate the multi-ball option to go for a three multi-ball mode as you try to get all the jackpots that lead to the superjackpot to give your score a big boost. As expected, once only one ball remains in play, the multi-ball mode will end, but at least this pinball table gives you a short period of time to hit a jackpot or superjackpot before the mode is truly over.

There are several targets on the left, center, and right areas of the pinball table that you must hit to light them up to go for one of the action modes in the table: Martian Attack. Once you’re in the mode, you’ll have a short window of opportunity to hit all four Martians to defeat them before time runs out. Win this round, and you will be rewarded with a multi-ball right after defeating the fourth Martian, for a two ball multi-ball for a chance to add some bonus points to your score. 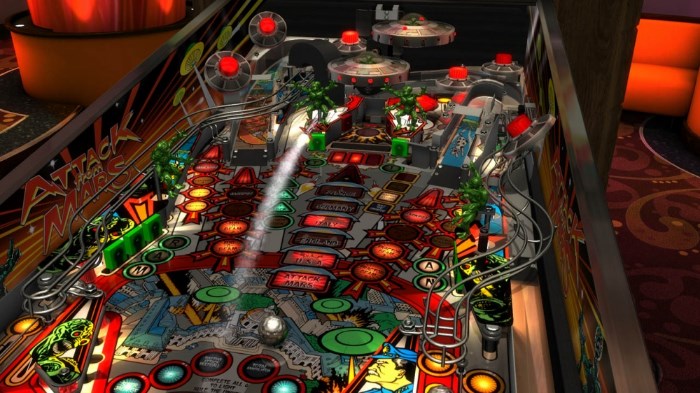 This being a Martian invasion, you will also need to defend from the attack waves of flying saucers (UFOs) that are attacking. You will need to focus on the lit up targets that form a forcefield that protects the main saucer, defending each of the five countries under attack. Defend all five countries, and you will get a shot at sending the ball down a sink hole that will destroy the main UFO for good, bringing you one step closer to the Wizard Mode for the table that will test your skills. Attack from Mars is certainly a classic pinball table that is worth your time and money, with its fast-paced action, UFOs, and Martian figurines around the playing field.


Next up, it’s time to dive into Black Rose! This pinball table was released back in 1992, and also had a production run of over 3,000 units. While Attack from Mars had a Martians theme, Black Rose goes for a pirate theme, as you can see from the table’s backglass which features a ton of pirates, Black Beard, and a female pirate with a black rose tattoo making its way through her chest. They’re all on a pirate ship, and a cannon is about to be fired, unleashing Armageddon on the seven seas! 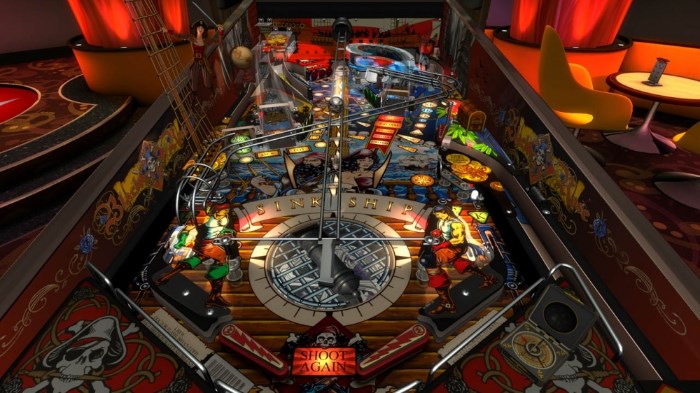 There’s a whirlpool ramp on the right side of the table (decorated with a plastic loop with the word whirlpool in blue and white) that you can send the ball flying through to boost the scoring level, ramping things up – no pun intended – to an extra ball or a million points for your score. You might also have noticed the big SINK SHIP sign in the middle of the table. This stands directly in front of the cannon in the center of the screen. Yes, I did just say cannon.

If you score a skill shot or hit all the targets banks or loop the upper ramp several times in a row, you’ll be able to open Davy Jones’ Locker. Once you’ve achieved this, you can send the ball rolling there to prepare the cannon. You can then press the launch button or hit the L/ZL and R/ZR buttons to fire away and the cannon will shoot out the ball in the general direction its facing. The trick here is to use the cannon to send the ball flying down on of the flashing lanes so that you can get a bonus and add a letter to the SINK SHIP sign. Once you manage to light up all letters, you will get to start the Sink Ship mode to, well, sink a ship. 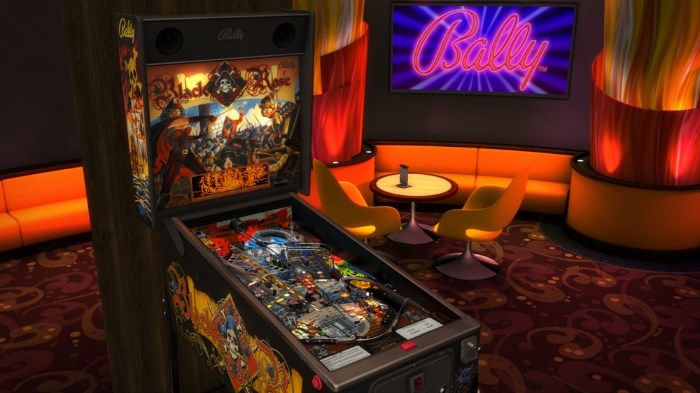 Black Rose is a fun pinball table, but it might feel like the weakest of the pack, only because the other two are very good. Something that might get in your way is the long metal rail that goes through the middle of the screen, since it will end up obscuring your view, particularly when playing the table in Portable or Tabletop mode – at least playing the table on the Nintendo Switch’s screen in vertical mode will allow you to see more of the table, offsetting this a bit.

The final table in this pack is Party Zone. This is a 1991 pinball release, and it’s called the Party zone because it includes characters from other pinball machines previously released by Midway – said characters being the Party Monsters, the Party Dudes and the Party Animals. Because of this, Party Zone is a more light-hearted pinball table, with lots of bright colors, flashing lights, and quirky characters – just looking at the backglass for the table will give you a good idea of what to expect. 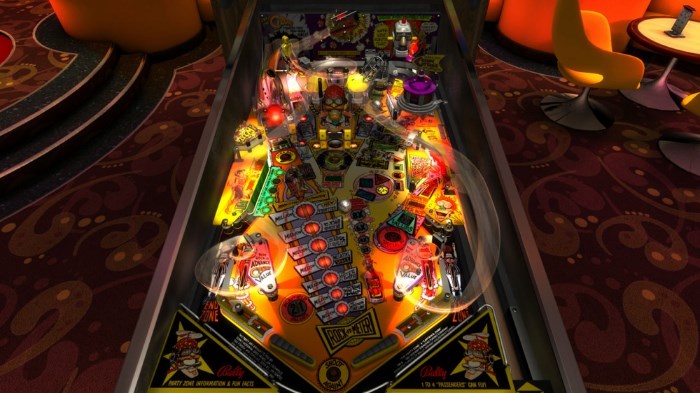 You will be guide in this journey by Captain B. Zarr, represented on the table as a big giant head placed right in the middle of the action. He sports a pair of goggles and an aviator hat, a moustache, and a soul patch, and in the 3D modernized version of the table (which you can activate and deactivate in this and the other two tables in the pack with the press of a button), he is seen riding a vehicle, floating in the center of the table.

You can start the two ball multi-ball in this pinball table by meeting all the partiers by hitting the Cosmic Cottage three times over – something that does seem weird since if it’s three groups of partiers then it should be a three ball multi-ball. Another gameplay element is the Supersonic Robotic Comic, which can be activated by lighting up the HA!HA!HA! targets and then going over the lit Comic Lane. By doing this you will receive one of five random rewards – an extra ball, bonus points, a bonus multiplier, an instant multi-ball party, or a special effect that makes it so that every target scores you 100,000 points. 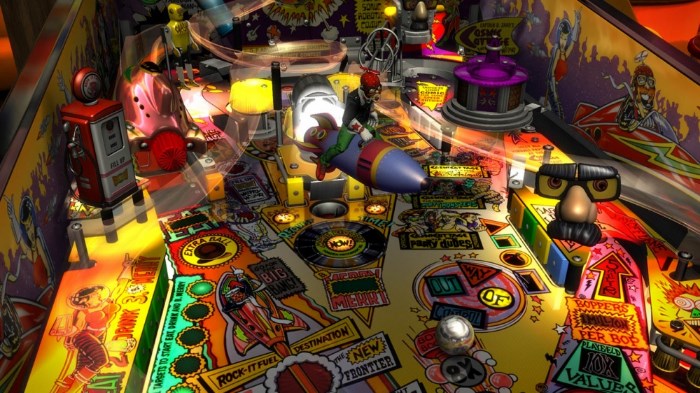 Party Zone is the fastest of the three pinball tables of this pack, with plenty of options for considerably increasing your score from bonus points and bonus score multipliers, and ramps that send the ball flying down looping plastic lanes towards the pinball bumpers. It’s a loud and fun pinball table, and one I recommend that you give a spin to!

Williams Pinball: Volume 2 is a solid pinball pack for Pinball FX3 that is certainly worth its $9.99 asking price. All three pinball tables in this pack are digital recreations of physical pinball classics, and a great way to try out these machines considering that nowadays the arcade is nothing more than a memory of ages past. 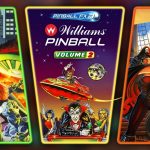 Disclaimer
This Williams Pinball: Volume 2 review is based on a Nintendo Switch copy provided by Zen Studios.