After giving us a tower defense game way back in 2010, a Metroidvania, a turn-based 2D strategy game, and a Metroidvania sequel, Image and Form is back with a new take on the SteamWorld universe with SteamWorld Quest: Hand of Gilgamech. This time around, we are presented with a turn-based card-based RPG adventure in which you will lead a group of steampunk heroes in a great-looking game that feels as if a storybook with robots had come to life.

But before you jump into a new journey, you will need to select between the three available options. In Squire, battles will be easier, and you will have an overall easier time completing the objectives the game throws at you. Playing in Knight will provide you with a good challenged that won’t feel overwhelming. The final difficulty option is Legend in which battles will be considerably harder, so you should only select this one if you’re ready for a challenge. 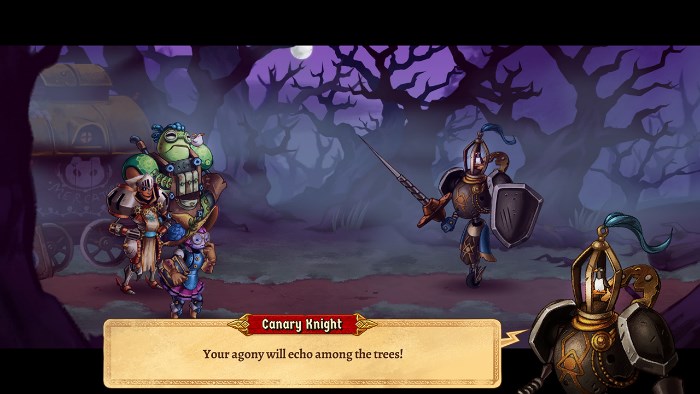 As was the case for SteamWorld Heist and SteamWorld Dig 2, SteamWorld Quest features a female character as its lead. Her name is Armilly, and she aims to obtain membership in the local chapter of the Hero Guild. She will be joined in this adventure by Copernica, a hero versed in alchemy who dropped out of college so that she could carve a path of her own, and by Galleo, a bulky craftsman eager to find a reason to leave his mother’s basement. The first task of the group will be as a duo, as Armilly helps Copernica search for a particular mushroom needed for one of her alchemy experiments: the Peppermint Puffer.

It is then that the game gets you started with a short tutorial section, showing that you can interact with some objects by pressing the A button. The A button will also be used to swing your weapon, which can be helpful for cutting down some items in your way to collect some extra coin, or for hitting an opponent before they can get too close, which will wound enemies before the battle has even begun – this is known as a Preemptive Strike. That extra damage dealt before the fight has even started could be the difference between victory and defeat, particularly when going up against bigger and stronger foes.

Soon after this, you will go into your first battle, learning about punch cards. Each turn you will end up drawing up to six cards, which will represent the abilities that your heroes can use. You can pick up to three cards to play per turn, from options such as Heroic Strike, which deals physical damage to one enemy, Bravado, which heals Armilly while easing her strength, or Mana Barrier, a card that Copernica can use to grant a Damage Shield to an ally, to name some examples. Each hero will have its own cards, so be sure to pay attention to this, since you will soon unlock the Heroic Chain ability. If you end up playing at least three cards from the same hero in a turn, you will activate a Heroic Chain, adding a follow-up action. 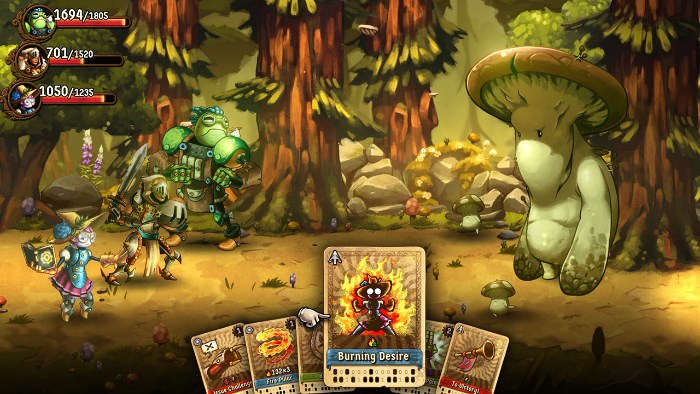 You will realize that cards are split into three different groups: Strike cards, Upgrade cards, and Skill cards. As the name suggests, Strike cards are used for dealing damage to your enemies. Upgrade cards will temporally boost and empower your heroes. Skill cards are the most powerful of the three types, which is why they require Steam Pressure (SP, represented by cogs that light up at the top of the screen) before being unleashed. Cards can also have one of five elements attached to it: Physical, Fire, Frost, Storm, and Arcane, each represented by a handy symbol. You need to keep this in mind because some of the enemies you face might be weak to a particular element while others might have a resistance to it.

If you think that the hand you got is not a good option for your current battle, you can select to Redraw some of the cards in your hand. This can be done up to two times per turn, replacing one card, which is discarded, with a new card that is added to your hand from your deck. If one of your heroes is scrapped during a battle, all cards related to that hero’s actions will be useless for your cause, so be sure to redraw them! This is even more important when you take the Heroic Chain ability into consideration, so be sure to pay attention to your hand!

After completing each battle, your party members will gain experience points which will bring them closer to leveling up. You will also gain gold and some extra items or materials as a reward for your troubles. Leveling up will boost your characters’ stats so that they can continue to keep up with their enemies. The stats to keep an eye on are your Health (how much damage a hero can sustain before being scrapped), Strength (how much damage can be dealt by some card types), Magic (which determines how effective some cards), Luck (improves the chance of random events going in your favor), and Critical Hit Chance (a percentage for the chance of landing a Critical Hit against your opponents. 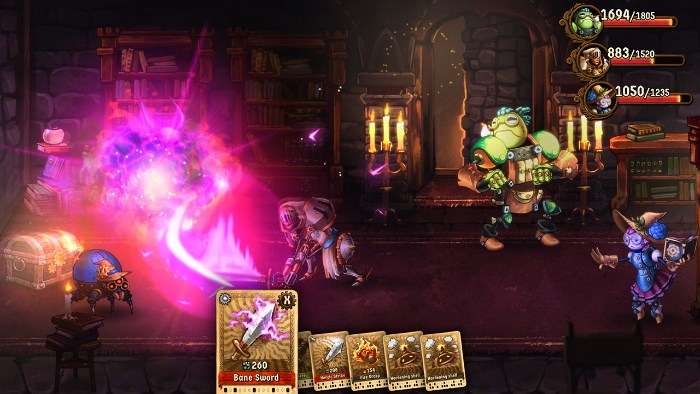 While leveling up is a must, so is making good use of recovery items, which can help you heal some of your lost hit points, or recover from a status condition. Recovery items can be bought with the gold you collect, but they can also sometimes be obtained after defeating some enemies, or even inside of a treasure chest you end up looting. Some recovery items can be used outside of battle, while others can’t be used other than during a fight. Why? Because after a battle, is over your characters will be revived, and you’ll be cured of negative status conditions. Using a recovery item during a fight will count as playing a card, so be sure to plan accordingly!


Another way to recover your heroes’ health is by visiting the Hero Statues you can find in each area you visit – just be aware that doing this will respawn all nearby enemies! Interacting with Hero Statues is also how you can save your progress, making them a very important cog in this adventure. Enemies that have respawned can be fought once again, and this will allow you to gain some extra experience for your heroes, which can, in turn, be put to good use to level up your characters.

You can end up gaining a new weapon for your characters or accessories that offer a stat boost. Once you find either one, be sure to open the pause menu with the + button so that you can go into the Equipment option to equip or unequip items as needed. Each hero can equip one weapon and up to two accessories, so be sure to check the boost that each item gives your party members so that you can maximize their potential. An accessory that boosts your attack and magic by 10% is nice, but one that does that at 20% is even better! 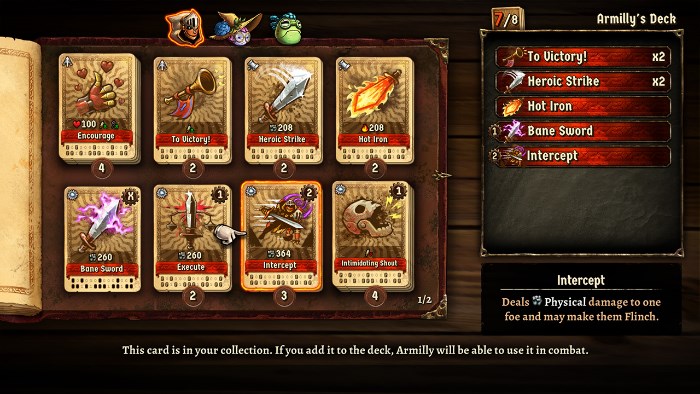 As you collect more and more cards, you will want to make good use of the Deckbuilding option in the pause menu. You will have access to a folder with all the punch cards you’ve collected, and you will be able to add cards to the deck from the card folder or remove cards back to the folder as needed. Each of your heroes is required to have up to eight cards (and no more!) in its deck, and you will need to keep their decks updated if you want to keep up with your enemies and the bosses you will run into.

You can also press the – button to review a more detailed set of information for the card, such as the hero that can use it (which you can already tell from its colored band), the damage it deals and of what type, and the range of its effects (targets one ally, one enemy, more than one, etc.). Checking a card’s details can be done either in the Deckbuilding menu or when you’re in a battle, which is nice considering that you sometimes might forget what extra effect a card has when in play.

And then, we have Tag Team Combos. Tag Team Combos allow some cards to become stronger when played along with a card from another hero in your party. To activate this bonus, all you need to do is play a card in the same turn from the hero indicated in the card with the Tag Team Combo effect before playing the actual Tag Team Combo card, and you will see that both heroes will cue up the bonus. 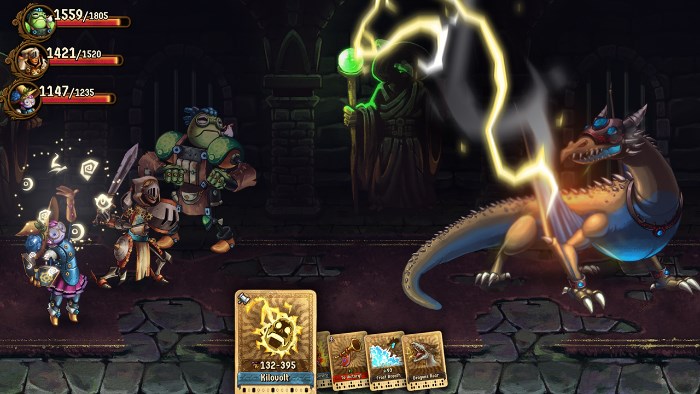 Your hard-earned loot can be put to good use by visiting the mysterious merchant which not only has weapons, equipment, and supplies to offer, but also the change to create new cards for your party or to upgrade the ones you have. Her inventory will change and grow as you play, so be sure to visit the merchant whenever you find her so that you can check what is new in her stock. If you want to create cards, you will need to do some crafting with the materials you’ve found in your adventure, as well as spend a considerable amount of gold. Once you’ve crafted a card, between one and four copies of said card will be added to your stock depending on the type of card you’ve created.

The game also offers a Compendium section in the Pause menu in which you can review all the tutorials you have already seen and a World Map from which you can check the maps of the locations you’ve previously visited. However, one thing that stands out for me under the Compendium section is the Bestiary in which you can check out some information on all the enemies you’ve encountered during your story run, checking out a short description of the character, its health, attack and magic stats, any innate defenses it might have, the cards it uses, and the battle rewards it bestows on heroes. 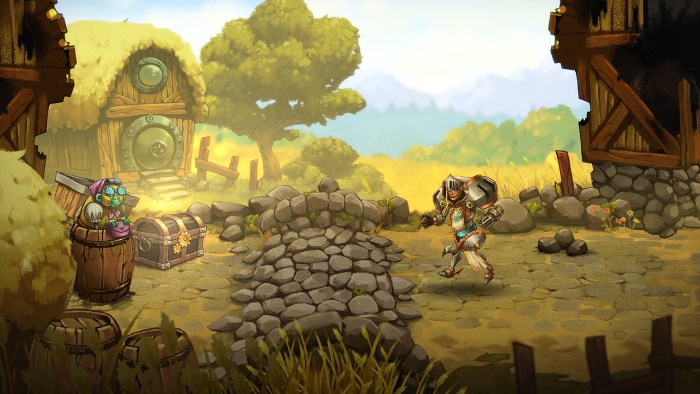 SteamWorld Quest: Hand of Gilgamech is another gem from Image and Form, and a must-play on Nintendo’s hybrid console, on which it is releasing ahead of its eventual PlayStation release at a later date. As you can see, while there are several cards you can use, things have been distilled down to offer a streamlined and highly addictive experience on Nintendo Switch.

Disclaimer
This SteamWorld Quest: Hand of Gilgamech review is based on a Nintendo Switch copy provided by Image and Form.