[Beyond PlayStation] Aliens vs. Pinball Review


Pinball month is the gift that keeps on giving, and now it’s time to talk about Aliens vs. Pinball for Pinball FX3 which offers players three new pinball tables to take on, all based on the Aliens franchise, with some twists here and there. The three tables are based on the Aliens movie, on the Aliens vs. Predator spin-off universe, and on the Alien: Isolation video game – a stealth horror game which I got a chance to review (you can check that review right here). How does each of the three different universes translate into pinball machines for Zen Studios’ platform? Let’s find out!

First off, let’s start by talking about the Aliens table. As the name suggests, this particular table is based on the Aliens movie from 1986, a cinema classic that is in many top 10 lists. For this experience, you will be teaming up with Ellen Ripley herself as you take on the challenges offered in this reimagining of the movie, directed by James Cameron, now presented as a pinball table. Yes, it does sound weird, but you’ll be happy to hear that the table definitely feels like part of the Aliens universe! 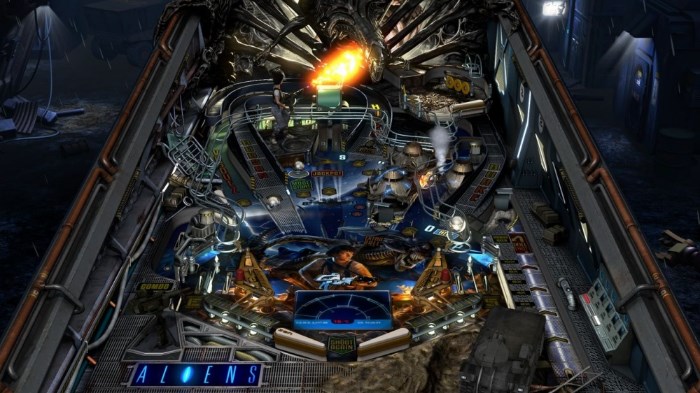 For example, if you light up all of the BISHOP targets, you will activate a 30 second ball save bonus so that you can safely send the ball flying around all over the place knowing that if you somehow miss hitting it with the pinball bumpers and it falls down the middle, then it will be sent right back into action. Spelling NEWT will activate the vent escapes, which are saves if the ball falls down the outer bottom lanes. Spelling VAZQUEZ will decrease the time it takes for the Sentry Gun to reload. Spelling HUDSON on the left ramp will increase the base scoring for the alien targets you destroy during the main game modes. 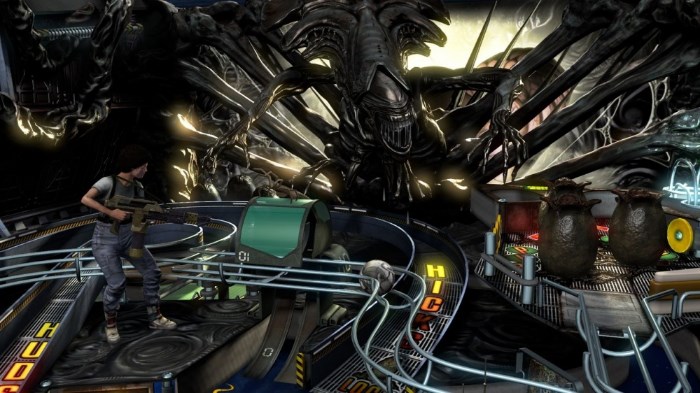 HICKS can be spelled in the center ramp, and this will boost the squad’s overall health during the alien attacks – this should be combined with the bonus of lowering the damage aliens deal if they reach the bottom of the table, which you get by hitting the spinner a bunch of times. BURKE can be spelled out on the right ramp, and this will boost the bonus multiplier while also giving access to the mini-playing field when available. The RIPLEY targets can be lit up when taking on the hive mini-playing field to get a bonus on your score.

There is plenty to do in the Aliens pinball table, and a lot of potential combo options for boosting your score by sending the ball down each of the ramps in succession, hitting extra targets here and there as you activate the mini-games in the order in which the events took place in the movie (if you want to, you can change this so that you can manually select which event you will take on). Finding Newt, reinforcing your defenses, setting up the sentry gun, escaping through the vents, it will all lead up to the final battle with the Alien Queen in this great pinball table.

Next up, let’s jump into a pinball table with a different overall feel: Alien vs. Predator. This table is not as dark and bleak as the Aliens table since it has an overall campy sci-fi vibe in comparison to the “we’re all going to die” vibe from the Aliens table. This has a lot to do with the source material, which is not a deal-breaker since having a nice variety of table experiences is a good bonus for this trio of tables. 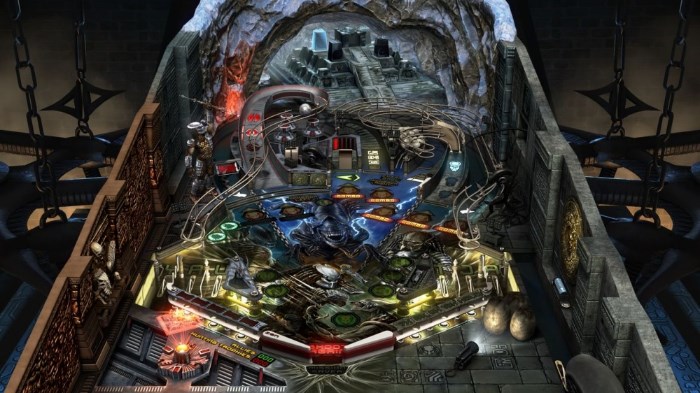 The table does something interesting for one of its gameplay modes since it turns things upside down, changing the perspective as you fight against the aliens who are making their way down from all over the place – this is something that can only be done in a digital representation of a pinball table since it would pretty much be impossible to do in the real world on an actual physical pinball machine.

Since you’re stuck between a battle in which each side is deadly and ready to kill, you will need to collect some weapons and set up some camouflage to be able to stand a chance. There will be some close combat sequences during which you can “ally” yourself with some of the targets (green) while attacking the other targets (red), to boost your overall bonus score opportunities while maximizing your score with each hit you land. You will also gain access to a small playing area in the center of the table which will open up to reveal a rotating inner circle you can move with the bumper triggers to try and catch the many balls that will be shot out from one of the seven openings that will light up to let you know which one is about to unleash a ball. 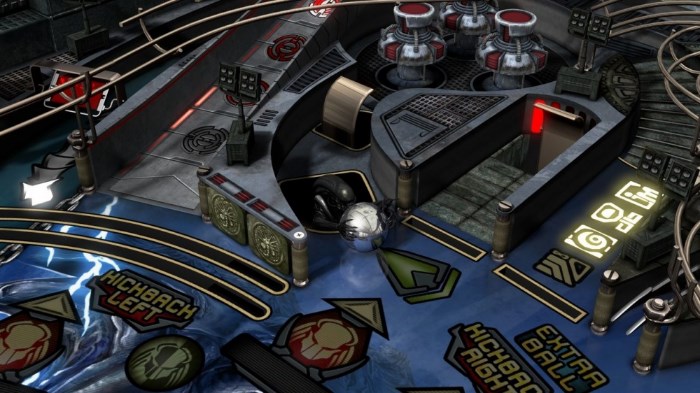 There is a big pyramid at the back of the table, below the rocky walls that surround the out-of-reach area. When you activate that particular mini-game, you will need to use the bumper triggers to change between the four pillars so that you can then use the launch button to rotate each pillar so that the symbol it displays to its front matches the symbol that is displayed by the pyramid itself. Doing this will also open up the chance for locking up three balls to activate the pyramid multiball.

The Alien vs. Predator table is a fun one to play, but due to the source material and its nature, it’s not the highlight of this pinball pack. This does not mean it’s a bad table, as it has some interesting design choices for its layout, combo opportunity and how each of its minigames is presented, but it’s the weak link out of the three pinball tables presented in this Pinball FX3 pack.

The final table to discuss is the Alien: Isolation table. In the Alien: Isolation video game, which saw a PlayStation 3 and a PlayStation 4 release, you play as Amanda Ripley, the daughter of franchise badass Ellen Ripley. This game is set 15 years after the events of the first Alien movie, and Amanda sets out to find out what happened to her mother. The alien that is found in the game cannot be killed, and it will basically kill you in “one-hit” if it finds you. Hiding might help, but the alien is smart, and it will eventually track you down and kill you. This experience is translated into a pinball table that is not as fast-paced as the other two, but which has more in common with the Aliens table than with the one for Alien vs. Predator. 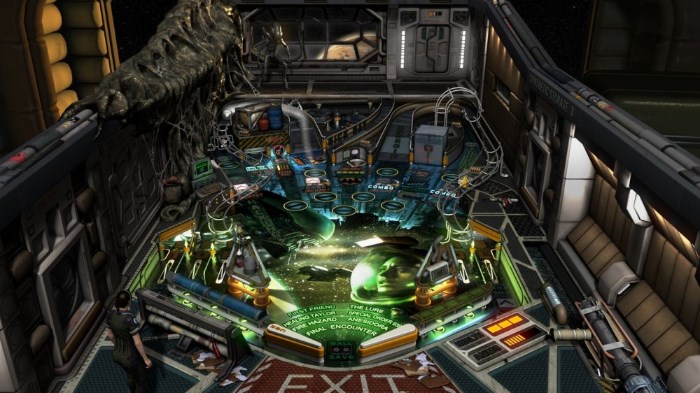 Because of this, you will need to keep an eye on Amanda Ripley’s health bar as you play. If you’re not fast enough at escaping from the alien or hiding before it spots you, the alien will jump towards Ripley, who is in the lower left part of the pinball table, and deal damage. Even though she won’t end up dying if she receives too much damage, the lower Amanda’s health, the lower the overall score you can get in the table. Because of this, you should be sure to heal her up by grabbing a medkit when needed. Depending on how the alien is acting, you can hide in the cabinet so that it doesn’t spot you, or use a noisemaker or the flamethrower if possible.

On top of the alien, there are other hostiles you will end up finding during your time with the Alien: Isolation table. Each enemy will have three health states depending on its color (green for full health, yellow for half health and red for “one more hit and it’s gone”), so use this to your advantage to focus on those that are almost dead so that you can deal the killing blow. You start off with a revolver and will need to find ammo to reload your weapon. You can also find bigger and more powerful weapons, which will allow her to deal more damage to enemies, or to keep the alien at bay. You can also do a stealth takedown by hitting targets from behind, which is trickier to do, but this does not use any of your ammo, and you get some ammo back in return. 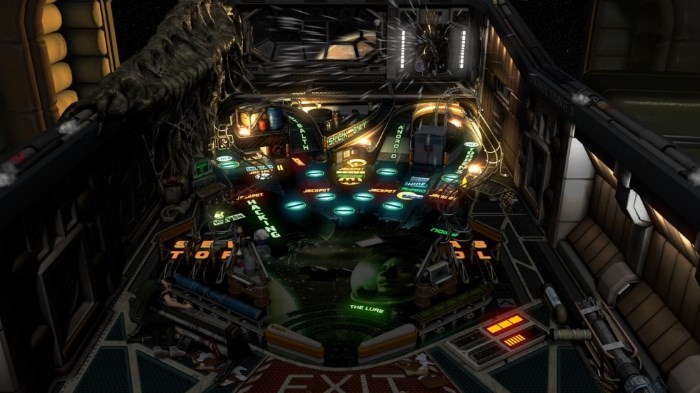 As was the case for the previous two tables in this pack, the pinball table for Alien: Isolation has a whole different look and feel, as well as a different vibe due to the focus on stealth and on the state of high alert you will always be in as you try to defeat the hostiles you find while trying to stay one step ahead of the alien in order to stay alive. It certainly does a good job of reminding me of the very stressful yet highly entertaining Alien: Isolation video game, so kudos to Zen Studios for capturing that in pinball form.

All three tables in the Aliens vs. Pinball table pack are easy to recommend since they each offer a different experience with solid table layouts, plenty of combo and score boosting opportunities, and a varied look into the beloved Aliens universe, which is why fans of the franchise will certainly find something to like in this one. 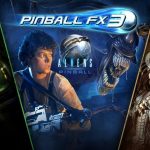 Disclaimer
This Aliens vs. Pinball review is based on a Nintendo Switch copy provided by Zen Studios.