Awesome Pea is a platformer featuring a vegetable as its main character with graphics that will remind you of the beloved Game Boy. Learn more in our Awesome Pea review!

This is a double review for Awesome Pea. The game was played by Ceidz and Tracey, and this review presents what they both had to say.

The concept of Awesome Pea is simple. You are playing as a greedy pea, and your goal is to collect all the coins and jewels in each level. But despite the simple gameplay mechanics, the platforming is hard when it comes to achieving 100% on every level. If you want that Platinum trophy, you are forced work for it, and that is what I liked about this game. I promise you though, your fingers will hurt after a while, and I also promise you will get frustrated with the simple mistakes you will make that cause cheap deaths, and you will die a lot!

The first level is a taste of what to expect. It begins with a simple stage that asks you to jump over some spikes and Mario-style pipes, but you will also figure out how hard the game is going to be just from playing that first slice of gaming. If you take the completionist, route it’s going to be a heck of a challenge to get that 100% on every level, but patience will reward you in the end. 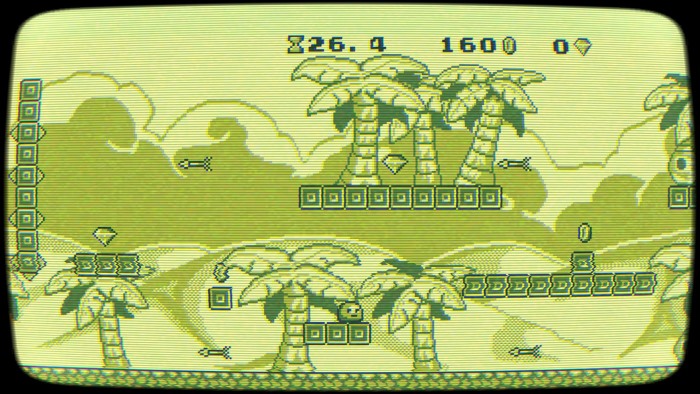 Aside from that and sore fingers, the game was really enjoyable. I really liked the old style Game Boy looks with the CRT options which you can toggle on or off. The game just oozes cuteness even in its retro art style presentation. I have always liked good retro looking games, and I have played some incredible retro-style games in my time, but does Awesome Pea fit in?

It definitely could have a place in the retro style games hall of fame, like Super Meat Boy is. The controls are flawless and tight, and the developers are obviously fans of the Game Boy. Looking at the game just instantly reminded me of how the games used to look back in the day, so I had a heavy feeling of nostalgia. Even the background music is very retro, which I liked! I like the audio choices since they really fit the overall theme of the game. So if you want a good challenge, then you will definitely get it here!

Like Tracey mentioned, Awesome Pea is by no means an easy platformer. The first level is easy and gave me the wrong impression of this game being another easy Platinum trophy on the PlayStation ecosystem, but I was way wrong! I think the game balance was sometimes off since some levels are short and easy and take less than a minute to clear, while some others are devilishly hard, asking you to reach the end without a single error in two or more minutes of perfect platforming. Then the following level might be an easy one that is achievable on the first run. Weird, right?

To make things a little more challenging, there are no checkpoints in any of the levels. So if you hit whichever hazard there is, you’ll be bumped back to the beginning of the level. I honestly raged at some segments because not only some of them are really hard, but there is often more than one hard segment in each level, meaning they must be all completely perfectly in order for you to reach the end. 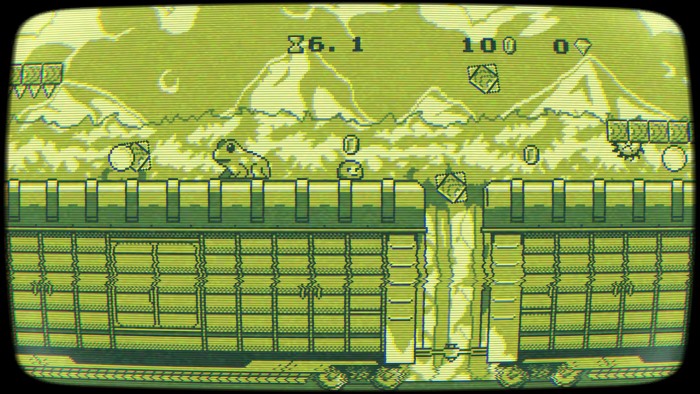 Awesome Pea also has a lot of collectibles in the form of coins and diamonds. At first, I thought nothing of it, but I then realized that EVERY trophy is tied to grabbing 100% of the collectibles in each level. This is easily doable in the early levels, but as I progressed to harder ones, the task became really extreme. The good thing is that in the little overworld game map we can see how many coins and diamonds have been obtained for each level, and then we can plan accordingly.

As for the game presentation, this game is built using a super Game Boy-esque setting, using a green palette. There is an option to turn the CRT/tube effect on or off, and since the game was difficult, I decided to turn it off in order to focus on the raw gameplay. The soundtrack is build using an 8-bits chiptunes set of songs, which is great. The controls are crisp, as you would expect for a hard platforming experience, so luckily once you know where the cheap deaths are, you can go through the levels with some trial and error. On the PlayStation Vita, there aren’t any loading times, and the game looks like it was designed from the ground up for this console experience in particular. 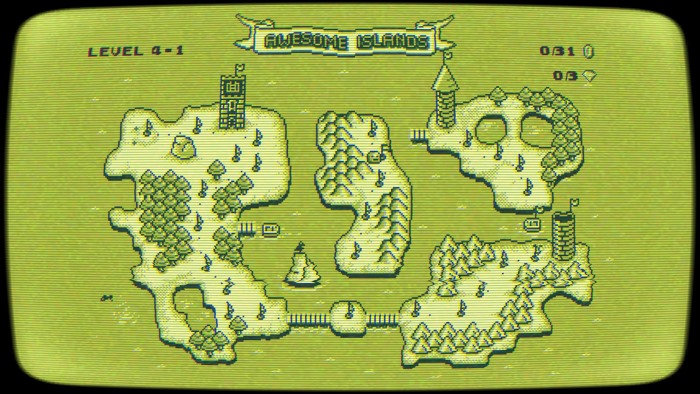 Final Thoughts
If you’re looking for a retro looking and hard platforming experience, then Awesome Pea is for you. We liked the level variety as we learned more about the different hazards that we were to encounter, but thought that the difficulty was raised to 11 relatively early in the experience. This game is definitively not for every gamer, but with a $3 price point, you can’t go wrong with some old-school infused platforming!

Disclaimer
This Awesome Pea review is based on PlayStation 4/ Vita copies provided by Sometimes You.