After a rather lengthy initial loading of a couple of minutes or so, I was able to start my journey with Stellaris: Console Edition on PlayStation 4. And right of the bat, I noticed something that would be a bit of a problem during my time with the game: the size of the text. I was sitting at a rather comfortable distance from my TV when I started to play for this review, but I had to move forward to sit at around 4 feet from the TV due to how tiny the font size for the text was. There is no way of changing the size of the text in the game’s options, so do keep this in mind!

Once you’re ready to start, you can select an empire, randomize an empire or create a new empire for your adventure. Selecting an empire will provide you with ten options with set traits, planet, form of government, ethics & civics, starting weapons and ship appearance. If you select to randomize an empire, you’ll get to select the galaxy shape and size, the AI empires, advanced AI starts, max fallen empires, habitable worlds, AI aggressiveness, difficulty, empire placement, or endgame crises. Creating an empire will allow you to select the appearance, species name, traits, ruler, homeworld, ships, starting weapons, and more, so there’s something in here for all fans of the genre. 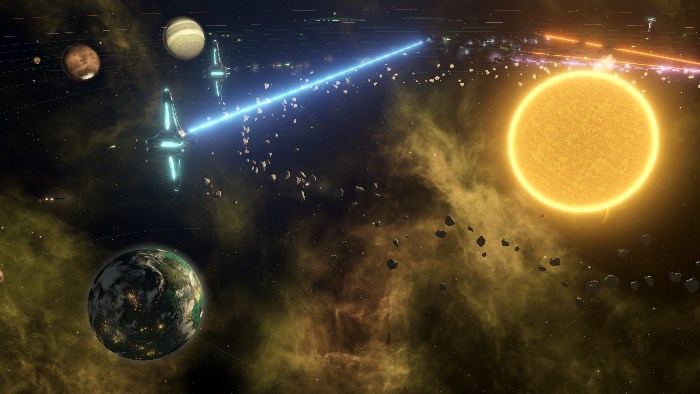 Once you’re ready to start, you can select to be helped by VIR, a prototype synthetic intelligence, so that you can learn everything the game has to offer, select to have some advice imparted on you, or not to have any help at all. This being a massive strategy game, you will definitely want to get the full tutorial. You will learn about what the many options on the left side of the screen are all about (they’re important), and how you can interact with them to establish new parameters and plans for your growing empire.

For example, and as to not spoil the whole experience, you can go into the Government option to review the information related to your empire and its government. You can review who the ruler is, the type of government in place, the ruler traits, or the governing ethics and civics. There is also the option of changing to another tab within the Government option to review your budget, which includes how much is produced each month, how much you’re spending in ship maintenance, army maintenance, station maintenance, and building maintenance, the overall monthly income and expenses and your balance in Energy Credits, as well as any economic effects in place. There is also the Demographics tab where you can keep track of your empire’s population, as well as on a handful of other valuable data. 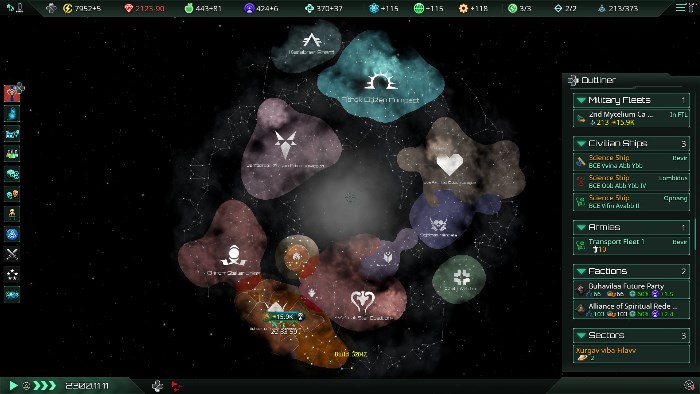 As you can see, there’s quite a lot to do and see just from the Government option alone, so once you multiply all that for another ten options (Contacts, Situation Log, Technology, Cosmography, Society, People, Ship Designer, War, Federation, and Map Modes), and you can start to get an idea of how deep you can end up going with this game. You will coordinate your research efforts in three different fields, keep track of the empires you have encountered during your journey, adopt different traditions and policies, issue edits, hire, dismiss or assign idle governors, scientists, admirals, and generals, as well as recruit new leaders as needed, design ships, and more.

If you want your empire to thrive, then you must make good use of your military fleets to keep your empire safe, as well as to expand your reach. Sometimes the best defense is a good offense, right? You will also need to pain attention to the victory conditions for your run so that you can plan accordingly right from the start so that you can maximize the use of your resources. For example, you can win by owning 40% of all habitable planets, by conquering or subjugating all other empires, or by having your federation own 60% of all habitable planets out there – as you can see they’re all rather hefty goals! 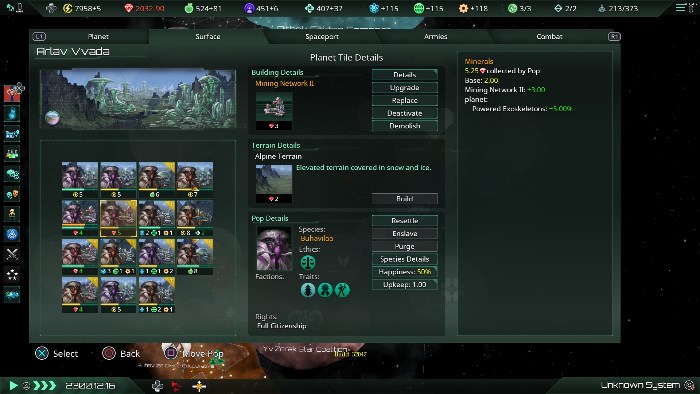 There are hundreds of things for you to do in Stellaris: Console Edition, building new things in your home planet, unlocking new buildings and ships, upgrading them, recruiting new leaders to add to your ships so that they can bestow bonuses upon them, explore your starting, surveying each of the available planets before making the jump to exploring other nearby galaxies where you might run into some hostiles, communicate with other species, form federations… it’s quite a robust list of objectives! You can spend hundreds of hours playing Stellaris and still have a ton of stuff left to do.

There are also two DLC packs and an expansion on their way to Stellaris: Console Edition. The first one is the Plantoids Species Pack which will add a plant-like species which has gained sentience and started to spread across the galaxy. Next up is the Leviathans Story Pack which will expand on the lore of the Stellaris universe with new content to explore. The final one is the Utopia Expansion, which is definitely bigger than either DLC pack as it will give players access to new tools for developing their empire, as they take bold new steps into the unknown. 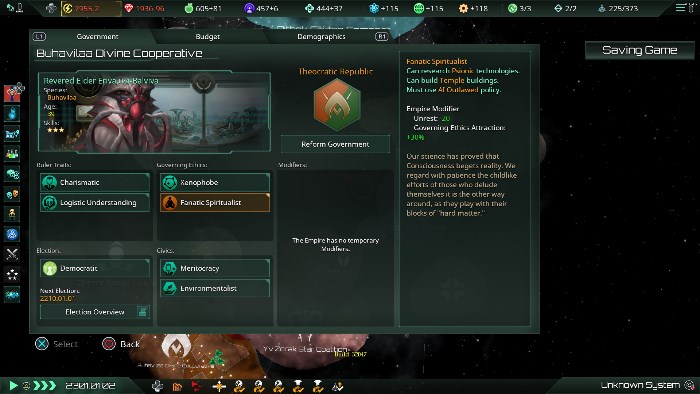 Now, as for the trophies, there’s something interesting about Stellaris: Console Edition. First up, here’s the information that you want to read: the game includes a Platinum trophy. Now, here’s the catch for this. If you want to be able to get any of the PlayStation 4 trophies for Stellaris: Console Edition, you will need to activate Ironman Mode. What this does is that during your run your game is automatically saved at regular intervals to a single file, so that you can’t go back to a previous save if you make a mistake. This being a strategy game, you can imagine how that affects how you approach your gaming sessions!

Stellaris: Console Edition is a solid effort at trying to make a rather complex PC strategy game work on PlayStation 4, and I have to say that Paradox Interactive has somehow managed to make it all click. Sure, it’s not as easy to interact with the game on PS4 than if you had a mouse and keyboard on PC, but that doesn’t mean the experience can’t work on a console controller. Once you put a couple of hours into the game’s extended tutorial phase, you will be ready to explore new galaxies in your path to unite or conquer the universe. 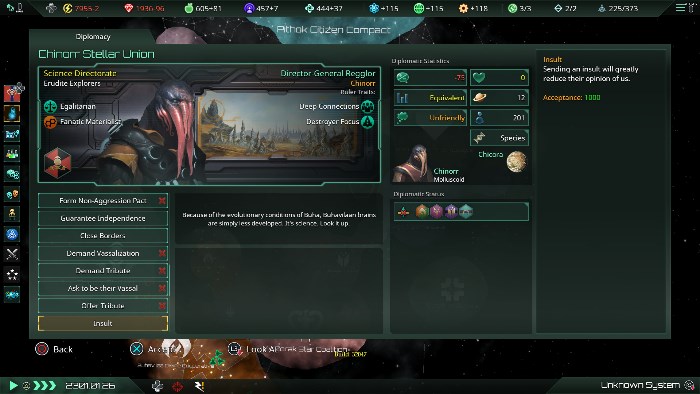 Disclaimer
This Stellaris: Console Edition review is based on a copy provided by Paradox Interactive.