Grab your guns and shoot and kill the mutated wildlife, cleaning up the rivers by blowing everything in sight up. Check out our Dick Wilde 2 review!

The local lakes and ravines have been infected by a toxic outbreak! Pair up with your friends in co-op mode and take on the deadly ooze and its disgusting dwellers.

– PlayStation®Move and PlayStation®VR Aim Controller Support
Players can play with either motion controller, with 16 unique weapons for each!

– New Epic Bosses:
Face off against new enemies on a gargantuan scale, including vicious piranhas, manic moles, and even a giant enemy crab!

Utilizing the power of either the PlayStation®Move and PlayStation®VR Aim Controller, players can clear the swamplands with all-new super-powered weapons – from physics-defying beam guns to homemade revolvers.

Hold on tight, this ride’s about to get bumpy!


Dick Wilde 2 is a new on-rails shooter where you are taking out mutated wildlife and cleaning up the rivers, so you’ll pick your weapon of choice and begin your journey down the river. This game reminds me of the on-rails shooters I played in the arcade when I was a kid, which is definitely a good thing!

With PS VR games you need the PS VR headset, and for this one you can use either the PS Move controllers or the PS VR Aim Controller. With the PS Move controllers you can dual wield weapons, making it slightly easier. With the Aim Controller, you lose the second weapon as the aim is two-handed, but you do get better accuracy with your guns. It’s great that they are giving you two options on how to play, especially since there aren’t many PS VR games that support the Aim Controller! 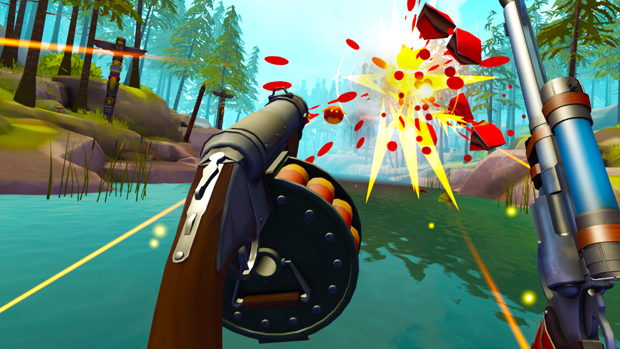 The game starts you off in a shack littered with junk around you. You can actually do some target practice here to get things going –
I spent some time shooting the cans. From there you can choose which mission you want to embark on. You pick the guns you want to start with, usually the free base type (at least in the beginning), and set out on your journey on a raft, blasting all of the mutated wildlife you find.

As you head down the river, you will have several splits in the road, with different challenges to complete. When you finish a section, you get the option to upgrade your weapons, making it easier to a point. It adds some replayability value as there will be different challenges and collectibles along each path. The game doesn’t have a lot of depth to it, but this will keep you coming back for more until you’ve completed everything it has to offer. 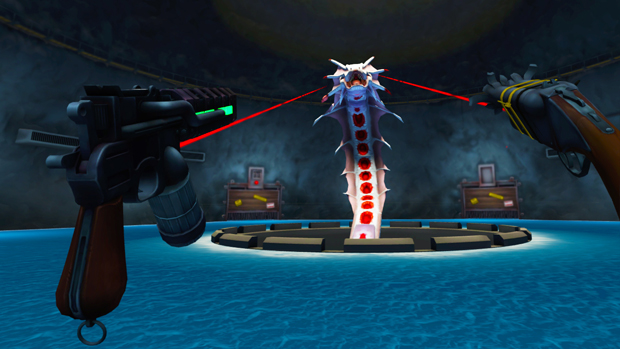 There is a co-op mode, and amazingly cross-platform is available with the other VR headset ecosystem, giving it a bigger install base right from the start on PS VR. You can work together clearing out the rivers., and it’s funny when you look over and just see a head and hands shooting. It does kind of break the game though, as difficulty doesn’t scale, making it much easier to achieve your objectives this way. Still, hats off to the developers as cross-platform play will keep a much larger multiplayer base vs. trapping them on their respective headset-based ecosystems.

As far as PS VR on-rail shooters go this game looks great, giving us a really unique hillbilly world. Each enemy has its own unique custom design from being mutated, and the boss fights are crazy too as they look larger than life in the PlayStation VR world. It’s a really great job by the development team with the overall design of the world and its inhabitants! 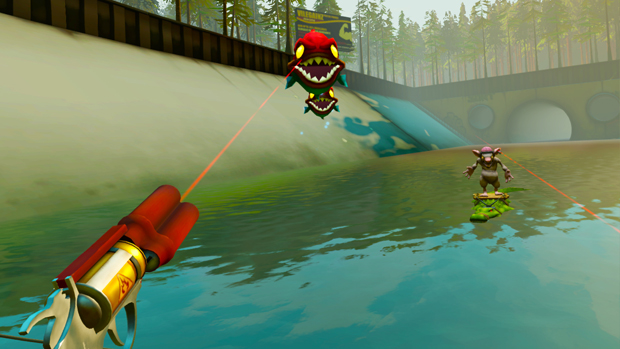 I liked Dick Wilde 2, and among the on-rails shooter experiences offered on the PS VR, it is one of the better ones. That being said, it doesn’t have a ton of depth or reasons for you to come back beyond chasing a higher score. I do give it props for taking advantage of the Aim Controller though since few games have done this – it’s unfortunate it makes the game harder than it has to be. Difficulty should scale down when using the AIM controller and up when in Co-op modes to compensate for things.

Disclaimer
This Dick Wilde 2 review is based on a PlayStation 4 copy provided by PlayStack Limited.