It’s pinball month at PS4Blog.net, and that means we’ll be playing a ton of pinball tables for Pinball FX3! As you can see from the trailer above, Pinball FX3 on the Nintendo Switch is now even a whole lot better thanks to the pinball magic brought by the Williams Pinball Pack Volume 1! This pinball pack includes the pinball classic tables Medieval Madness, Junk Yard and The Getaway: High Speed II, as well as a free pinball table in Fish Tales. Yes, you read that right, a free table! You can get the pack for $9.99, or get individual tables for $2.99, but I definitely suggest that you get the pack right away since there’s a lot of fun to be had with this trio of paid tables (plus the one freebie!).

You’ve all probably played at least one pinball table from Zen Studios at some point, be that in Pinball FX3, which is the most recent pinball platform release from the studio, or from Zen Pinball, Zen Pinball 2, Star Wars Pinball, so you know the team is great at delivering fun and fast-paced pinball tables. This time around, they’re recreating actual pinball tables that released back in the day, and they’re doing it in style by giving us the original tables in all of their glory, as well as a second version that features new wall art, particle effects, as well as interactive 3D characters, and other extra bells and whistles, bringing them closer to what we are used to seeing from the studio’s modern-style pinball tables. 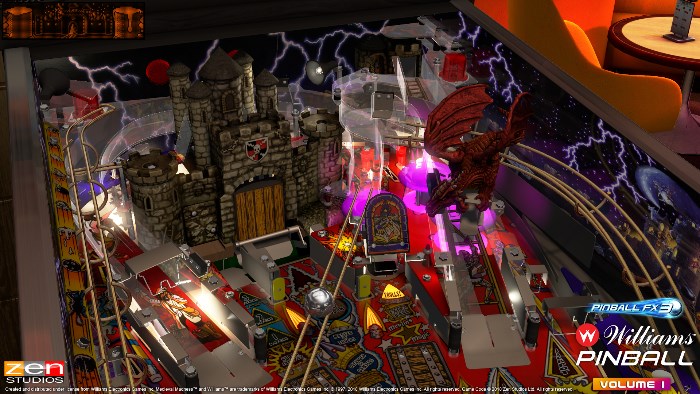 First up, let’s dive into Medieval Madness. The table was originally released back in 1997, and it is considered by many pinball fans as one of the best tables ever released. It features a very fast-paced layout with a ton of targets to hit and many chances to hit the different ramps on the table to maximize your score by improving upon your overall multiplier as you activate bonuses such as Merlin’s random magical bonus, as you aim to lower the castle’s drawbridge in the middle of the screen to open a spot for you to aim for to destroy the castle.

To the left side of the castle’s entrance, there is a spot for you to lock balls so that you can start the multi-ball. Once you’ve locked three balls, you’ll get to take on the multi-ball as you try to shoot the flashing lanes for a jackpot or two as you work your way towards getting a super jackpot for your effort. There are other multi-ball options, such as for collecting all five objects you can throw with the catapult, and you can also activate multi-ball madness for some massive boosts to your score thanks to the many lanes you can aim for to score some jackpots.

The table features six mini-games for you to complete, along with the main objective of making short work of six castles that you need to destroy. The mini-games include Joust Champion, in which you need to shoot the loops, Catapult Ace in which you shoot your catapult at the castle, or Master of Trolls in which you will need to hit the targets in front of the castle so that you can then try to defeat the trolls. All of the above makes Medieval Madness a very fun pinball table, and one you’ll definitely be playing over and over again.


Next up is Junk Yard, which launched way back in 1996. Junk Yard is a bit different from other pinball tables as it tasks you with collecting junk in order to build different tools and vehicles on opening up mini-games that will allow you to boost your score based on your skill. Due to the table’s layout, you should try to hit the targets on the left and right side of the table so that you can activate the ball recycle option for the outlanes so that if your ball goes out over one of the activated outlanes, you can recover it and carry on.

Junk pieces are collected by completing skillshots or by taking a dive through the ramp with a giant toilet. Depending on the combination of junk you collect, you’ll be able to create different contraptions. For instance, you can combine a television and a weathervane to build a radar, or a fishbowl and a jalopy to create a submerger. How would you like to get your very own flying machine once you’ve collected a propeller and a jalopy? The sky is the limit when you use other people’s junk to build stuff… as long as you can get one of them fancy jalopy after combining a bathtub, bicycle wheels and a fan! 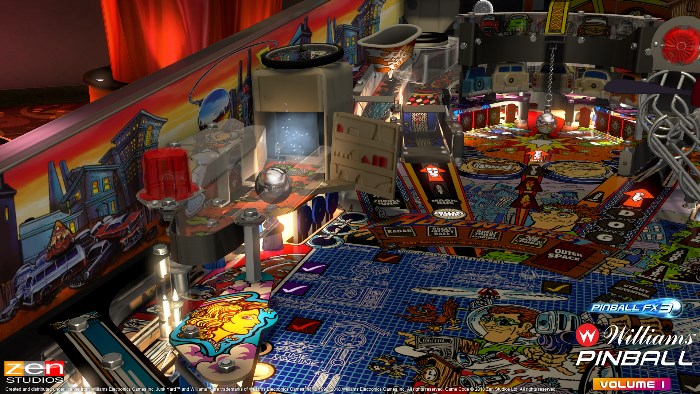 The extra objective in this one varied and they include Time Machine in which you have a short window of opportunity to score big… or die trying! Window Shopping will allow you to win one of four potential awards by pressing on both flippers, with prizes including things such as an extra ball or collecting some fireworks. Magic Bus is one that you can activate by using the bus ramp, and you will get one of ten awards that can give you extra points, an extra ball, some junk, the chance to activate a potential multi-ball, and more.

And then there are the four Adventures which you can be lit by collecting the corresponding creation (Radar, Submerger, Jalopy, or Flying Machine), as well as a fighting adventure that can be activated once you complete the four adventures and have collected all junk. This last one is called Outer Space and is a fast-paced wizard mode in which you have four balls to shoot around with your flippers so that you can defeat Crazy Bobby quickly shooting a ball over all five lanes to turn off all lights before the lights from previous lanes come back on. You’re going to love playing Junk Yard! 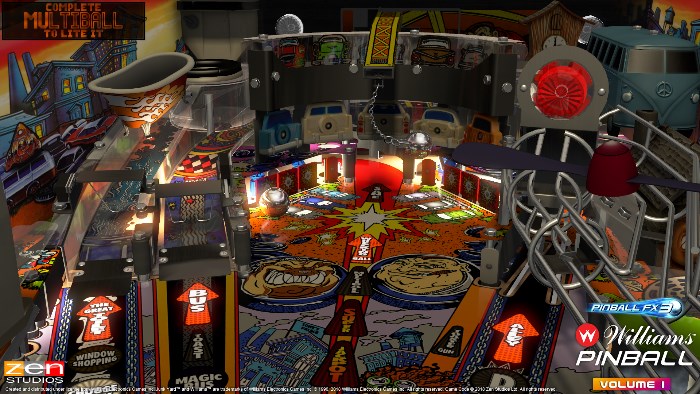 The third table in the pack is The Getaway: High Speed II, which was released in 1992, with a production run of a whopping 13,000+ tables! It’s the fastest of all tables in this Williams pack, as you will see as soon as you send the ball into the playing area. The ball will feel as if it’s traveling up and down the table a lot faster in comparison to the other two tables, which is actually what is going on! The game also favors allowing players to get ridiculously high scores within seconds of starting their run – you can quickly score over 5,000,000 points in a blink by hitting a handful of targets with a couple of shots.

The first thing this table has going on for it is that it uses La Grange from ZZ Top as its main song during gameplay, which right away puts it ahead of the other two tables in this classic pinballs pack – being able to score millions of points at a time per shot is just the cherry on top. The table also uses a gear shifting stick to launch the ball into play, as well as to control your speed in the video mode mini-game and to shift gears so that you can plan for the gear awards you can obtain as you play – going up a gear will first boost your score, while subsequent gears will award you with the video mode play, a multi-ball, etc. 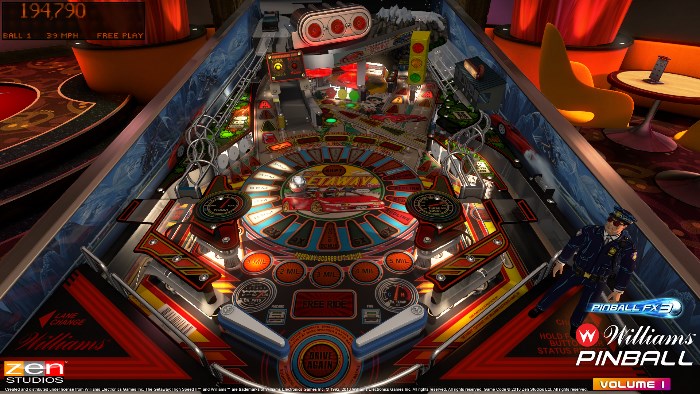 Kickback is automatically engaged when you start to play the table, and once you’ve used it you can activate it again by hitting the 1-2-3 targets in the left or right side of the table – this is a must since the ball will be moving all over the place at a high speed, so you’ll need that kickback at some point. The game only has the one ramp, which is probably different from most pinball tables you’ve played, but the rest of the table makes up for this by offering a very colorful and “alive” playing field for you to explore.

If you’re good enough to shift into 5th gear, you’ll be able to activate the Redline Mania mode. What this does is light up the Supercharger ramp so that you can quickly send the ball up to activate a special multi-ball during which every single big bonus on the table will light up, allowing you to combo jackpots, super jackpots, big bonuses from the freeway loop, and even a chance to get an extra ball! You’ll even get to activate the kickback again which is great since the balls will come flying down hard towards the bottom half of the table during this special multi-ball, and you probably won’t be able to keep all of them on the playing field with the three pinball flippers. 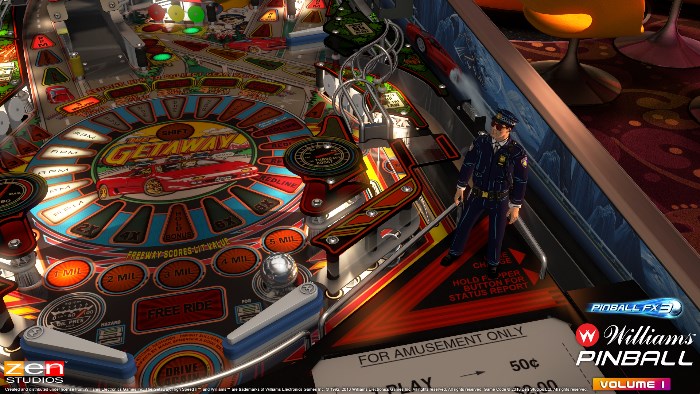 Williams Pinball Pack Volume 1 is a steal at only $9.99 for all three tables (plus the freebie that everyone gets) since we’re getting three classic pinball tables that are presented in style on Nintendo Switch. The fact that all three tables also offer a revamped and modern look at no extra cost, and that you can toggle it on and off with the press of a button as you play, makes this a very easy pinball pack to recommend. There are more volumes on the way, with Volume 2 already out and Volume 3 right around the corner, so get ready for some classic pinball action! 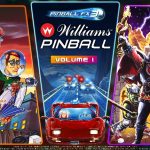 Disclaimer
This Williams Pinball Pack Volume 1 review is based on a Nintendo Switch copy provided by Zen Studios.

Baba Is You Out Today On Nintendo Switch

Best Tips and Tricks to Record and Share PS4 Gameplay