It’s time for a new table pack for Pinball FX3, and this time, we go medieval! Come check out our Pinball FX 3 Medieval Pack review!


The Medieval Pack for Pinball FX3 brings us a pair of great pinball tables: Epic Quest and Excalibur. As you can tell from their names, and from the screens in this review, both games feature a medieval twist, but each table feels a lot different from the other one!

First up, let’s talk about Epic Quest. This pinball table places you in the shoes of Max, a rather enthusiastic knight ready for going out on an adventure of epic proportions. This digital pinball table merges the fun gameplay mechanics of pinball with a Role Playing Game (RPG) adventure. As you play, your character will gain experience points, and you can review your progress by checking out the XP bar at the bottom center of the table. Win battles, and you’ll receive experience points, a random item and a chance to lock a ball for the multiball mini-game. Once you obtain enough experience points, your knight will level up. 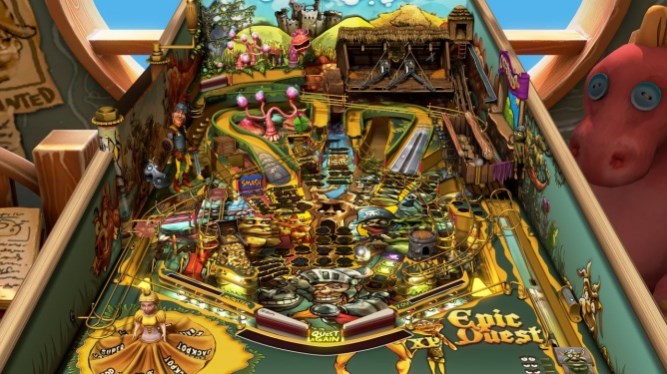 By leveling up, Max will receive a boost to its stats, which will make him stronger and able to take on stronger monsters, which yield better items if defeated. The fun part is that the table keeps track and saves your progress so that the experience points you gain are kept safe when you get a game over, thus allowing you to carry on with your adventure! You can also equip or sell items at the Loot Hole, so be on the lookout for the purple set of Epic items for your knight! Nothing makes a knight more fashionable than an epic helmet, shield, and sword combo – not to mention you’ll get a score bonus! Items are also saved during your adventure, so you won’t lose them when you get a game over.


There are twelve monster battles in this pinball table, so you’ll end up battling, for example, giant rats, ghosts, skeletons, or vampires! You can do battle at the haunted mill, the forest, or the dungeon. Once you’ve encountered a monster, you must deplete its hit points (HP) by slashing with your weapon. To do this, you must hit either the monster target on the left side of the table or the ramp on the right side of the table. If you’re not careful, the monsters will also try and damage you, so you’ll need to parry their attacks by sending the ball down the left side ramp. 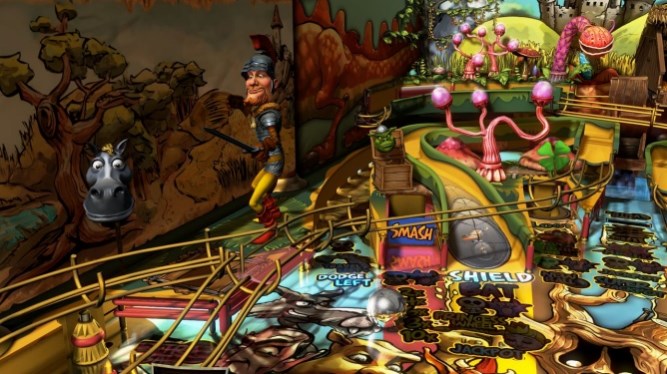 Magic will also play a part in your adventure, and you must make good use of the Orcanium to select an elemental spell for your arsenal. While you start your quest with no spells at your disposal, you will get a chance to unlock them as you play the table. Early in the game, you will be able to make the most of elemental weapons if you use the right one when battling a monster that is weak to said element, but later on, you will find monsters with elemental resistances that will require you to mix things up.

As you can tell by now, Epic Quest is a very fun pinball table that does something very unique thanks to its digital nature. It is thanks to its existence in video game form that Zen Studios could get a bit creative and give us a pinball TV with plenty of RPG elements for a very refreshing experience.


And now, let’s go into Excalibur. This one is a bit more traditional than Epic Quest while also doing some interesting things for the digital pinball. First up, is how the table handles the kickback functionality. For those of you who are not aware of what kickback is, most of the time a pinball tables will send a ball back onto the playing field when it’s lost through the center lane or the left or right outlanes, as long as the kickback indicator is flashing. Excalibur mixes things up by offering you a chance to activate kickbacks on either side of the table’s outlanes by hitting the diverter in the middle of the table to move the captive ball so that the target for that side of the table is open for you to shoot it to activate the “Lancers” that keep the ball safe in the outlanes. 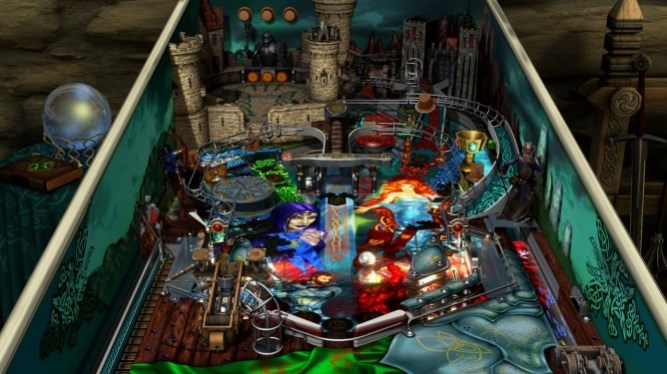 As you play on the table, your focus should always be, of course, on keeping the ball in play. But as you do this, you should also aim at increasing your score multiplier and at activating the different quests you can complete to boost your score and bring you one step closer towards activating the Wizard mode. There is a mini playing field where some of the mini-games take place, and completing them will sometimes randomly reward you with a boost to your score multiplier, so it’s always recommended that you try to activate as many of the table’s mini-games as possible.

Along with the mini-games, the Excalibur table also has Knight Missions, each representing one of the Knights of the round table in the lore of this pinball table, King Arthur included. Thanks to this, you will take on missions as King Arthur, Sir Lancelot, Sir Percival, Sir Gawain, and Sir Kay. Some of the Knight Missions will ask that you keep a multiball in play as you hit a specific target to take a secret road, while others might ask that you to hit a ramp in particular as you follow the instructions on the dot matrix. 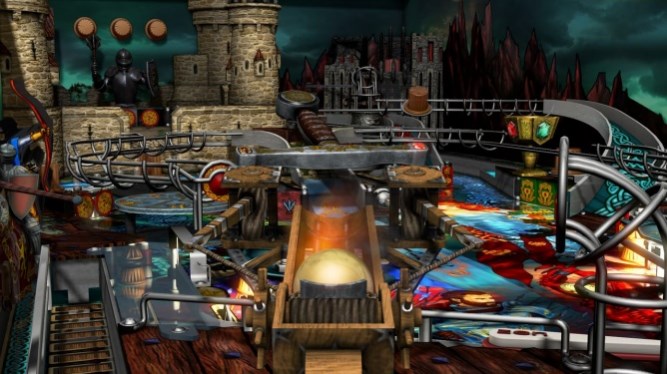 The Excalibur table is just as epic as the Epic Quest table, but with a different tone, feel, and gameplay mechanics. While not as RPG-heavy as Epic Quest, Excalibur is still just as fun with fast-paced ramp combos, a mini playing field, and a more serious and dark tone.

The Medieval Pack for Pinball FX 3 is a steal at $4.99 on its own as it provides you with two very fun pinball tables for Pinball FX 3 that share a medieval theme. You can also get the tables as part of the massive Zen Originals Season 1 Bundle that includes the Sci-Fi Pack with Mars, Paranormal, and Earth Defense, the Zen Classics Pack with El Dorado, Shaman, and Tesla V12, as well as the Medieval Pack with Epic Quest and Excalibur, for a total of eight tables for only $19.99 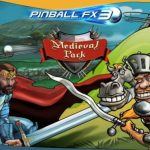 Fun pair of pinball tables with a ton of fun for only $4.99

Disclaimer
This Pinball FX 3 Medieval Pack review is based on a Nintendo Switch copy provided by Zen Studios.