Captain StarOne from Flyhigh Work is a colorful idle-style game now on Nintendo Switch. Learn more about this quirky game in our Captain StarONE review!


Dangerous life forms have exited the abyss, and it is your job to eradicate them before it is too late! You will play this one in a very relaxed and laidback manner, clicking here and there as needed when you run into enemies that are too powerful for you and that will require a bit more strategy. It is then that you will need to make the most of crew combos to make sure the Captain and its crew are victorious so that you can carry on with your adventure.

You use minerals to proceed to each new level, as well as to level up, and these are collected automatically by your spaceship in the background – even when you leave the game -, but you can also mash on the B button to get some from the enemies you battle. The Captain and its crew will automatically attack enemies, so all you need to do is get started, leave the screen on and keep an eye on the game to make sure a powerful enemy doesn’t sneak in to try and wipeout your group. If this happens, press the L button to open up the menu and level up your crew as needed so that they can stay on top of things. 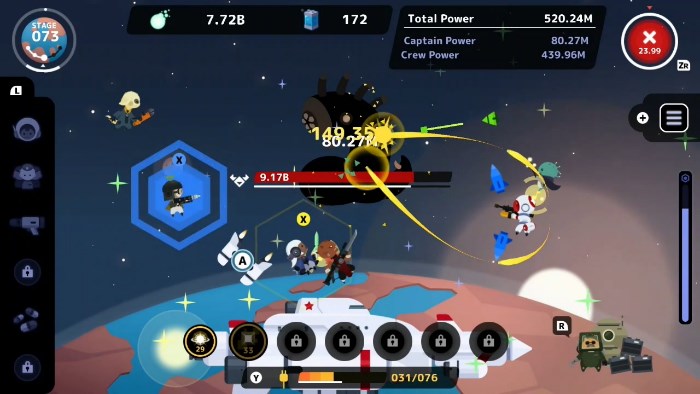 As you battle you can collect batteries from enemies, which can be used to purchase stuff at the shop – you can access the shop by pressing the R button. You’ll get access to modules and stat boosting capsules that will give your crew the extra strength needed to live another day. There are also skills you can unlock as you play, and making the most of these and of commands will be the best way to combo towards victory. The cycle repeats for a bit as you level up enough to unlock the handy warp feature which allows you to gain unknown circuits on the side, which can be developed into hyper-cores that give you the edge in battle since hyper-cores are the most powerful support items in the game.

Skill points are what you need to unlock new skills for the Captain to give you an extra oomph during battle. You can buy skill points from the shop, or you might get lucky and gain some after mashing on the B button when battling an enemy – although the odds are not in your favor since it’s a rather rare drop. The more your skill level rises, the more skill points you will need to get to the next skill level, but that also means that those skills will certainly be more powerful and useful! 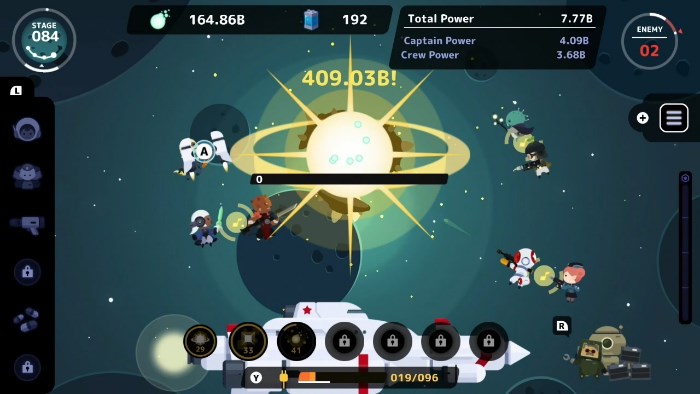 Friendship tokens are also important since they will allow you to boost your friendship level, making the crew members and the Captain stronger in battle. Crew members who fight alongside a Captain who they are friends with will give them a boost to their attack level, and this will make you complete battles faster or make it easier to defeat powerful enemies or bosses that might otherwise give you trouble.

Pressing the X button will unleash a Star Storm combo, during which you can press the direction in the D-Pad that corresponds to each of your available crew members so that they can get in on the action. Every hit landed will be a combo hit that boosts the combo gauge at the right side of the screen. Once the combo gauge is full, you will unlock combo fever time during which you can mash the X button to deal considerable damage and make short work of your enemies. 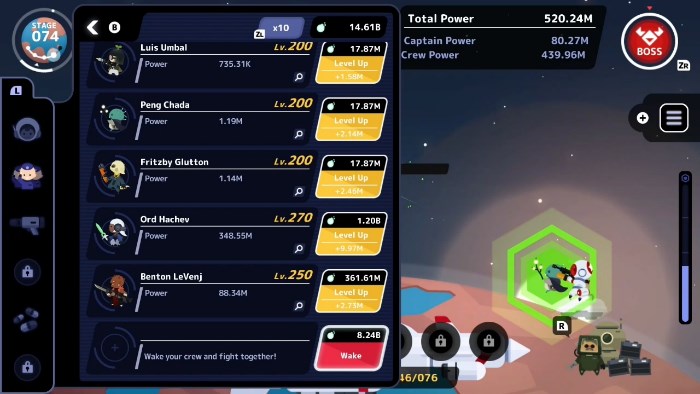 As you play, you can use the left analog stick to move your jetpack around the screen to collect items or to interact with characters by pressing the A button while the jetpack is on top of them so that you can move them around. This is important since there are sometimes Power Spots in a battle that will increase a character’s attack speed when placed there – it’s a temporary boost.


Bosses are a bit different since you are on a time limit while you battle them, so if you’re not powerful enough you will end up failing the battle. If this happens to you, take a moment to level up your crew by battling regular enemies so that you can increase your stats before giving the boss fight another shot. If even after that grinding session you’re still not powerful enough to kick the boss’ butt, you might want to run away by pressing the ZR button so that you can give grinding battles another go. 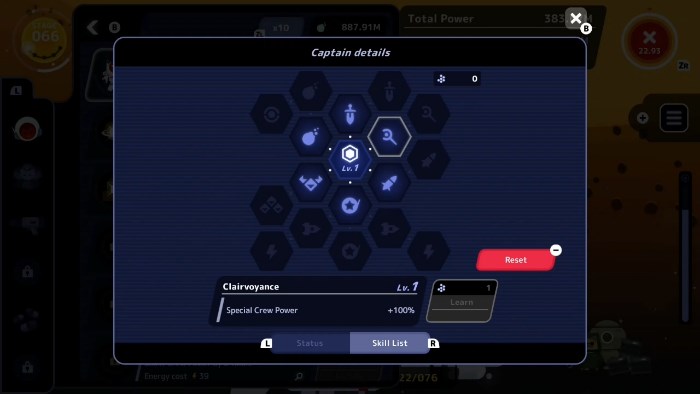 Captain StarONE has its origins on mobile, which is why it makes sense for it to have login bonuses for when players “login” to play the game on Nintendo Switch. The shop also has containers for sale, which you could say are similar to the loot boxes you find in mobile games or in releases such as Fortnite or Overwatch, the difference being that Captain StarONE on Nintendo Switch costs only $9.99 and has no in-game microtransactions, so the one purchase is all you need to be able to do everything you can during your time with the game.

You’ll always be working on a main mission, such as completing 100 stages, as well as on submissions, with varied objectives like defeating X number of enemies, destroying Y number of bosses, clearing Z number of stages, awakening different crew members for your ship, reaching specific thresholds for how many crew members are on your spaceship, the number of friendship tokens you’ve obtained, the critical hits you’ve landed, the skill points you have managed to collect, and more. 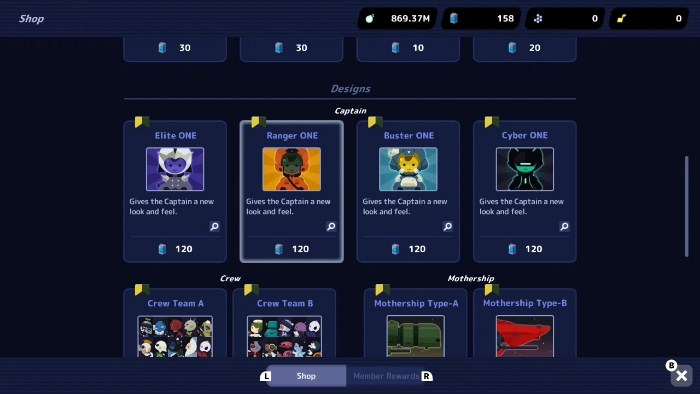 Captain StarONE is a fun and colorful idle/action release that has been brought from mobile to console, sans the microtransactions that most mobile games are known for. It’s definitely an addictive experience, and it can be yours for only $9.99.

Disclaimer
This Captain StarONE review is based on a Nintendo Switch copy provided by Flyhigh Work.