Out of the three adventures, the first one with the Warrior is the one that is “unlocked.” I say it like that because even though the other two adventures are grayed out and a have a lock below them, you can actually go ahead and dive into them – although the game does mention that it would be best if you first completed the story of the previous adventurer. But before you start any of the stories, you will get to select between the three difficulty settings: Easy for those new to strategy games, Normal for those familiar with the genre, and Hard for master strategists who don’t mind a challenge.

The Warrior’s story starts when a group of bandits attacks his village for no other reason than plundering, murdering anyone who tried to resist. Donning his father’s old armor, he decides to chase the bandits. He soon finds a group of peasants who will join him on his quest, and it is then you realize that the main hero, be that the Warrior or the Wizard, will be commanding different groups of units on the battlefield – Braveland Pirate is the exception since for that adventure your main hero will join the fight.

The game will show you a short tutorial. All adventures take on the same basic principles, so you will select a character and move it around the grid area within the hexes that are highlighted, to then plan the next move or attack an enemy unit. The more fighters in a unit, the more powerful it will be, so do keep this in mind when attacking or else you will be eliminated in a blink. The number of fighters in a unit is also important since every time enough damage is dealt one of the fighters in said unit will die, and this applies to both your enemies and your own units! When a unit is attacked, it will deal one counterattack for the round, which is something else you need to watch out for. 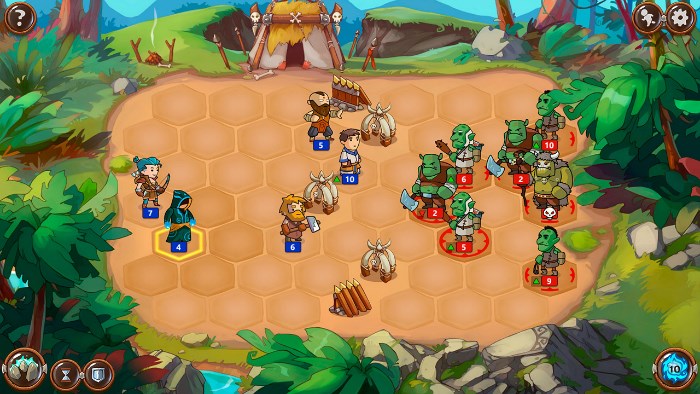 If a unit has a special skill, you can use it with the Y button. You could, for example, use a skill from your archers to deal considerable damage to an enemy unit, but you should plan when it is best to use said skills since after using it you will need to wait for it to recharge. Sometimes it is also best if a unit defends for a turn since this will boost its defense stat so that it can withstand more damage for said turn – sending a unit down the enemy lines and have it defend could be a good tactic for luring the enemy to attack said unit so that the rest of your group can survive. As your units take damage, you will start to receive Fury, and you can have up to a starting ten max Fury. Fury can be used to unleash special attacks that will help to turn the tides of battle in your favor. You might launch a deadly fire arrow, or increase the movement of a unit so that it can reach a ranged unit that is giving you trouble, forcing it to move before it can attack from a distance.

Each unit in your squad has different stats for attack, hit points, defense, magic defense, and movement, while your main hero has four stats, in particular, to look out for: attack, spirit, endurance, and knowledge. Win a battle, and you will gain some experience points and some gold coins for your trouble. Gain enough experience points, and your hero will level up, increasing its leadership while also giving you the chance to boost one of his stats from the available options. Leadership is important since it allows you to add more fighters to each unit. You see, the gold coins can be used to hire more fighters for your available units, up to each unit’s limit, to obtain new skills, or to purchase equipment. Gold will also be used to heal your units to recover the fighters you lost during the battle, so if you don’t play things right, you could end up losing a big part of your reward.

As you play each adventure you will also gain access to gear for your hero that will provide a much-needed boost, so be sure to equip these to the corresponding slot since they’re not going to do you much good if you don’t put them to good use! Some loot will only give you a boost to stats, while others will bestow special bonuses for some of your units – you might, for example, purchase a bow that will allow archers to deal 20% extra damage on the battlefield. Equipping the right set of items can make a huge difference!

All three games use the same basic gameplay mechanics while having something that sets them apart. For Braveland Wizard that is having spells to unleash in battle by making use of the mana that you obtain, as well as a skill tree in which you can use the talent points from leveling up to improve units. Another thing it does is include Dungeons which you can replay over and over in order to grind for a bit to boost your experience and gold coins – something that Braveland Warrior lacked since once you completed a level, you couldn’t play it again. Braveland Pirate does all of this while also adding the main hero to the battle, so you’ll need to be extra careful in protecting him from harm. Instead of spells, the Pirate has tricks to activate in battle with courage, and the skill tree is different. 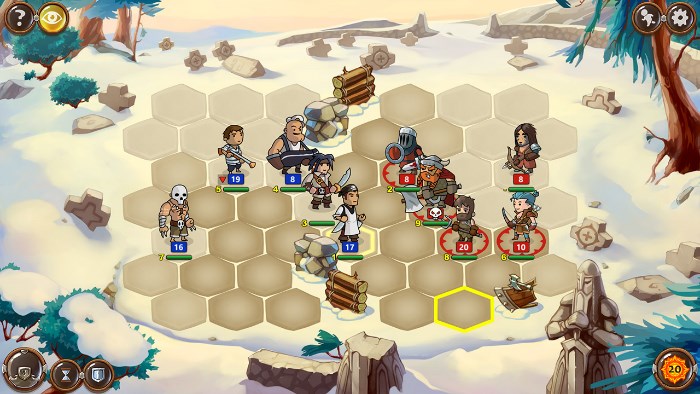 Braveland Trilogy is a fun strategy-lite trio of games with hundreds of battles to complete and some light customization that goes a bit deeper and deeper as you progress in the trilogy. It’s available for only $14.99, and you definitely get your money’s worth. If you’re looking for a micro-management style of strategy game with several skill trees and a big narrative, then this trilogy is not going to be your thing. But if you have a handful of hours to spend with each game and their rather addictive gameplay cycle, then, by all means, download it today!

Disclaimer
This Braveland Trilogy review is based on a Nintendo Switch copy provided by Ellada Games.