In Assault Android Cactus+ you play as junior constable Cactus who travels to the Genki Star, an interstellar vessel that has sent a distress signal. After getting closer, the Genki Star – which is supposed to be a civilian vessel – has some cannons pop out of its sides… and the cannons start shooting at you! Since the hangar door is sealed up, she does what anyone in their right mind would do: use her ship to crash into the Genki Star to see what is going on inside and find out a way to fix things before it is too late!

It turns out that the robots aboard the Genki Star are now hunting down everyone else inside of the vessel because the four Section Lords, big and powerful robots that were supposed to be taking care of the ship’s crew and passengers, have started to malfunction, turning every robot on the ship against all androids and humans on board. You must, therefore, find a way to get to the core so that you can reactivate it since it is she who can regain control over the robots before things take a turn for the worst. 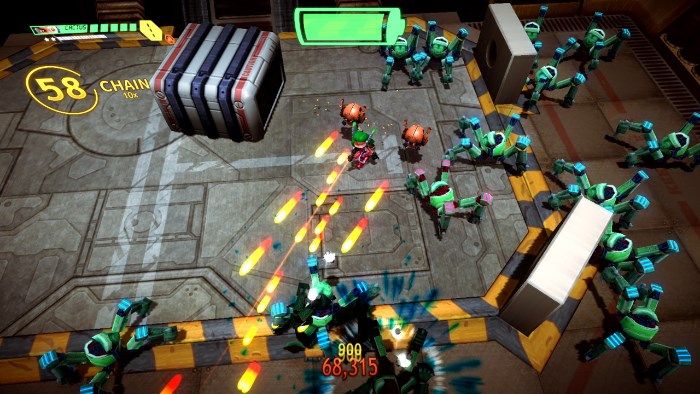 Since this is a twin-stick shooter, you’ll quickly get the hang of things. You’ll move around with the left analog stick, aim with the right one, and shoot by pressing the ZR or the R buttons. The enemies you defeat will release energy which you can collect to power up your primary weapon. If you need a more powerful weapon for the job, you can grab your secondary weapon by pressing the ZL or L buttons. Since secondary weapons are more powerful, and could be exploited easily, they will overheat as you use them, so be sure to keep an eye on that!


There are different power-ups you can collect as you defeat enemies. There’s one that will add a pair of flying drones around you that will also shoot at enemies, or one that will increase your speed and attract your enemies, to name some examples. Using power-ups is a must since enemies have a tendency to pop into action at the worst of times. As you take on them you need to make sure that your battery, which is always draining at a steady rate, is not damaged by their attacks. If you want to keep going, you will need to collect the battery recharge (green icons) left by destroyed enemies 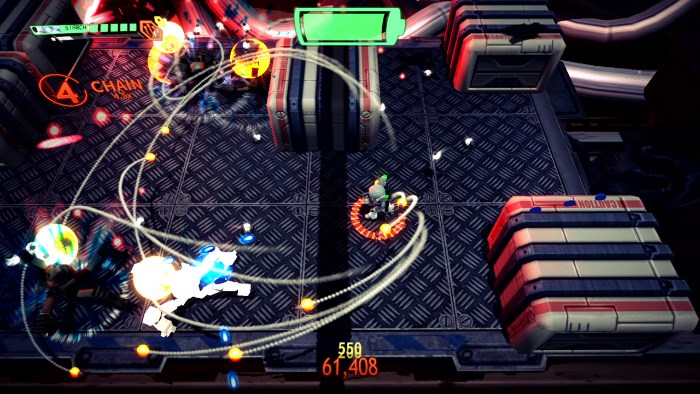 Along with Cactus you will also get to select and control other characters that have different primary and secondary weapons, which will change how you take on the different stages that you will play through. While Cactus has a relatively standard primary weapon and a very powerful flamethrower as a secondary weapon, other characters will have a spread shot or seeker mini-missiles as their weapons, or a powerful explosion blast as a secondary weapon. Playing as different characters is something I recommend so that you can find the one that feels right. There are nine androids in total, and you’ll unlock new ones as you complete each of the game’s areas.

You’ll be graded for every stage you complete based on your performance, in particular depending on your overall score. Your score will be greatly affected by the score multiplier you get by activating a combo chain by destroying enemies one after the other before the short combo window is over. If you’re damaged and sent to the ground, your combo will also end. Having a full combo chain from the start to the stage to when you kill that last enemy will allow you to gain a big boost to your score so that you can, hopefully, get an S+ rating for your efforts. 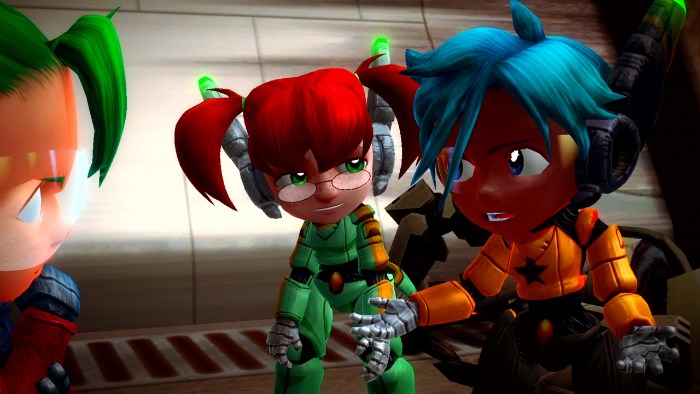 There is one big boss to beat at the end of each area, and it is then that the game turns a bit into a bullet-hell experience. Each boss will have a different movement and attack pattern for each of its phases, so you’ll need to pay attention to see what it can do after you drain one of its life bars. Some of the patterns will repeat every other phase, and by the time you reach the final phase of the fight, you will need to counter every attack the boss used during previous phases, all while you try to keep your combo going so that you can aim at getting an S+ rating for the battle.

The game has online leaderboards so that you can see how you’re doing when compared to your friends or to the rest of the world, which will certainly motivate you to push forward and get good. There’s also a lot to unlock with the in-game currency you collect. There is an art gallery with several promo rends, concept art as well as guest art, and EX Options that can allow you to change the camera to a first-person perspective, a more isometric angle, some extra filters, making the music be affected by the flow of battle, making the androids have normal sized heads, and more. 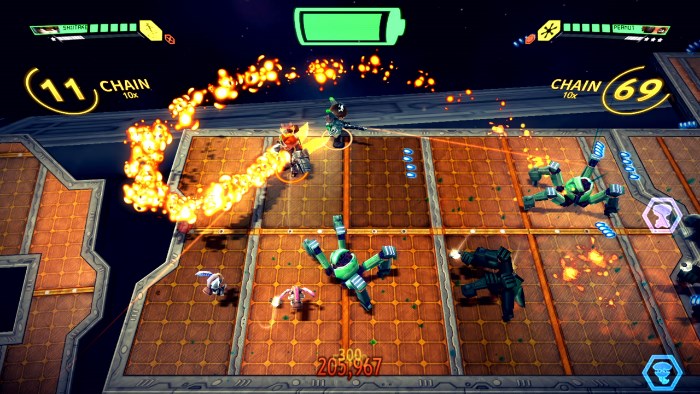 Assault Android Cactus+ also includes some accessibility options so that more players can join in on the fun. There is a default color filter as well as two extra settings, the enemy hit flash can be set to default, medium or low, the screen shake can be changed to be only for events or to be completely off, automatic aim can be enabled to help those new to the genre, and revive assist can be set to automatic, enabled or disabled, depending on your gaming taste and skills.

Assault Android Cactus+ is a very fun, fast-paced twin-stick shooter that I loved playing on Nintendo Switch. It feels great when playing it on the TV or on the Nintendo Switch’s screen when in Portable or Tabletop mode. The main story campaign offers over 20 stages and boss battles to complete, and as you progress in this adventure you will unlock Boss Rush, Infinity Drive and Daily Drive so that you can have more ways to play. And then there’s the Campaign+ mode which features remixed stages so that you can give it another as you aim to place your name at the top, which makes it very easy to recommend this $19.99 release. 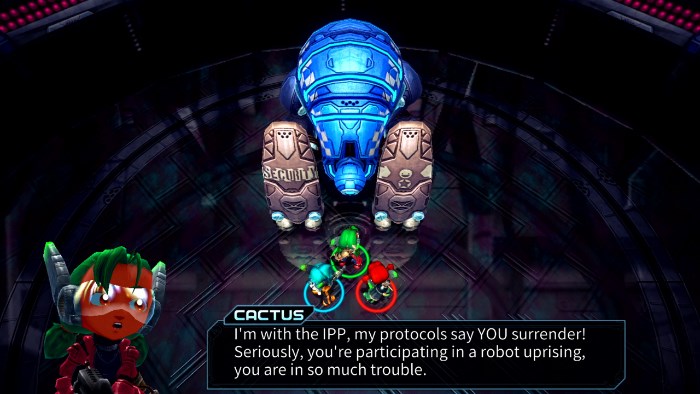 Disclaimer
This Assault Android Cactus+ is based on a Nintendo Switch copy provided by Witch Beam Games.