[PS4] At Sundown: Shots in the Dark Review


At Sundown is stealth-driven, top-down multiplayer shooter in which up to four players compete in both online and local deathmatch. With a variety of cool weapons to take each other out and multiple maps across five different zones, only the BEST will dominate each round and survive the ultimate challenge to rise to the top at sundown!

At Sundown: Shots in the Dark Trailer

Let me start by explaining the hide-and-seek part of the game. This one is played from a top-down view that shows you the whole map, and each map you will play on has a few spots with light here and there, which will reveal any player that is currently in that spot. Any other place on the map will not be revealing anyone, not even yourself! As you move, you’ll have to try to keep track of where you are, with only a vibration from your controller that indicates when you’ve bumped into a wall. You can also press the X button to get a small glimpse of where you are, but this also exposes your location to your opponents, which might be a risky thing to do if you want to survive!


Your goal when playing is pretty simple since you have to kill your opponents and avoid getting killed. So when you think you have an enemy in your line of fire, or if you’re feeling a bit paranoid, shoot! Of course, this will also reveal your location since your opponents will be aware of where the shot came from, so moving away from that spot is also rather important. From the main menu, you’ll be able to get into the Training mode, where you’ll get access to some training levels on movement and on the 11 different weapons available in the game. There’s a basic and advanced variance for them, with each having time objectives to earn bronze, silver and gold medals, and yeah, there’s a trophy for getting all those gold medals! 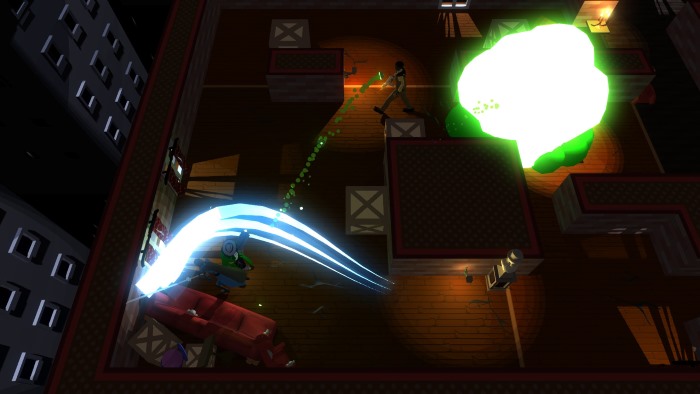 Once you’re done with training, it’s off to some matches! You can either play locally against bots or friends or go online to play against other humans in unranked or ranked matches. At first, you only have access to a few types of games, like the classic Deathmatch or the Arena mode, where you gain a point each time you’re the last man standing. Depending on the type of match, there are a few available settings like the number of kills required for the win, and a few generic settings like forcing people into keeping the same weapon throughout the whole match (as opposed to being able to change it each time you die). You can also choose the zone and map the match will take place in, with each of them having different layouts, light layouts, and sometimes even traps that can kill you!

Speaking of weapons, you only have four unlocked when you start playing the game. Each weapon has its own playing style, so you have a lot of options to find something for your particular needs. If you prefer close-up contact, grab the sword; if you’d rather aim for a widespread effect, the shotgun is your best option. Each weapon also has an alternate fire to give you a bit of variety with what you can pull off. 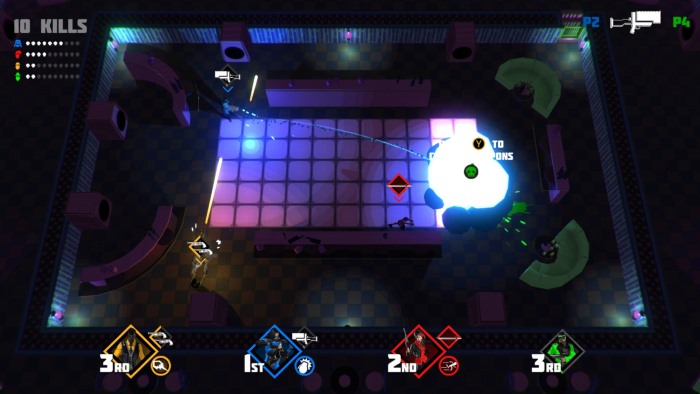 And how do we unlock more modes, maps, and weapons? By playing of course! There’s a level system in place, where each training or game gives you experience points. Each level you gain unlocks something that opens up to even more variety in the game.

After my first match against bots, where I got totally wrecked, I wasn’t too sure about the game. Things were going too fast, shots coming from nowhere, and I could hardly spot where I was re-spawning after my deaths. Then I went in again, and after a couple of matches, I started to get the hang of it, and everything went smoothly afterward, to a point where I had a hard time taking the controller down even if I was just playing against bots!

And with each new game type being unlocked, totally different experiences were coming with it. Take the King of the Hill type for example, where a zone on the map becomes the “hill,” and you have to get in there to earn it and survive to keep it and score points. It’s not just a matter of killing and avoiding, as you’re literally telling every opponent you’re in that zone when you take control of it, so you’re not really hiding anymore.


One thing to be aware though is that if you’re a single-player person, this game can quickly become repetitive. This is a multiplayer game meant to be played with friends or online. Otherwise, you’re just playing against bots, and there won’t be much to keep you coming back if you’re just doing that. And with that comes by biggest issue with the game: multiplayer isn’t working great. In all my time spent with the game, I was never able to connect online. For a game that focuses on the multiplayer aspect, I’d expect this service to be of top quality, so I’d suggest checking out the server’s status before venturing in with this one. 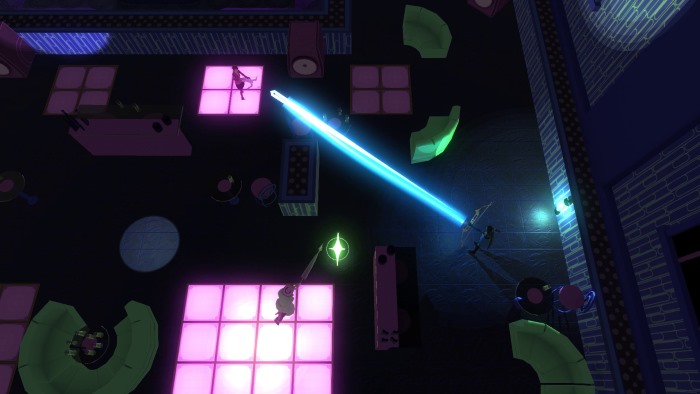 As for the trophies, it will take some time, mostly because one of the trophies requires you to win 500 matches, but other than that the majority of the trophies should come naturally while playing. The only one that might be a challenge is the one for getting all the gold medals in the training mode. Some of those times are pretty difficult to pull off, so a lot of practice will be required.

Final Thoughts
At Sundown has a truly original concept and is an incredibly fun multiplayer game to play. I’ve had a lot of fun with the hiding mechanics once you get acquainted with the concept. Its only downfall is the connectivity issues and the lack of single-player content when online doesn’t work since it becomes only a practice mode against bots.

Disclaimer
This At Sundown: Shots in the Dark Review is based on a PlayStation 4 copy provided by Versus Evil.

At Sundown: Shots in the DarkVersus Evil
0 comment
0
FacebookTwitterEmail

The World Next Door Hits Nintendo Switch Next Month