Are you ready to relieve the stories you went through in the wild west? But did they really happen like you’re telling them? Find out in our Guns’n’Stories: Bulletproof VR review!

Unforgettably vivid cocktail from emotions, in which we’ve added everything to make a player fall out of reality for a while to receive exactly these bright and fresh emotions we’ve only experienced when were kids. The game will generously reward you for a desire to move actively – you can evade bullets, shut them down, and hide behind the objects while shooting back in your enemies.
Impressive spectrum of weapons (firearms, throwing weapons, and even futuristic arms) that will allow you to feel like an experienced shooter who is capable of dealing with hordes of attacking enemies alone.
We advise you to start from easy levels in order to receive more seamless gaming experience and get tired much lesser.


Guns’n’Stories: Bulletproof VR is, as the name suggests, a new PS VR release, so you will, of course, need a PS VR headset, as well as a set of PlayStation Move Controllers. The game is a gallery shooter, so for the most part, you will stay in one position and take out multitudes of enemies as fast as you can. What makes it cool is the storytelling mechanic it improvises upon.

The game starts with a grandfather asking his grandson for whiskey in return for tales of his time in the old west. Early on the kid found his grandfather’s gun (that should have been locked away!), and he begins to tell the story. Each level of the story will have the grandfather narrating the action… but he is a bit of an unreliable narrator as he is constantly getting caught in plotholes in his story, and he then has to come up with a reason for said issue. It adds a nice dose of humor to the story, and it often gets you much better weapons than you should have in the first place, so it’s also good for your odds of surviving! 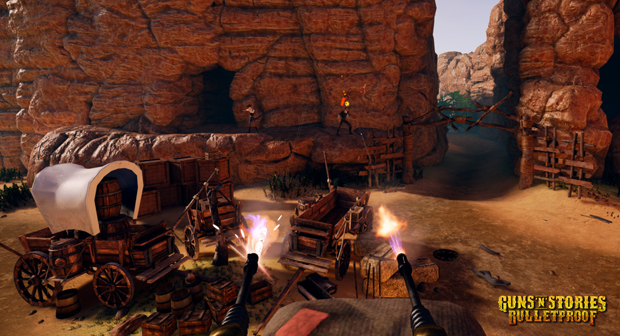 The game itself is a bullet hell gallery shooter. You will have waves of similar-looking enemies shooting bullets or attacking you head on from all over the place. You WILL need to look around, target them and shoot them down before you can move onto the next one. You use both PS Move controllers as guns, so you’ll have to point and shoot, which should have been a simple thing to do, but something seems to be off with the aiming. If you want to be good at the game, then you’ll need to get some headshots, and this is something I wasn’t quite able to get going, which did make it possible for the onslaught of enemies to overwhelm you.

There are nine levels, so you’ll be playing this one for a few hours at most. As you go through the levels, there is a percentage in front of you letting you know how you are doing on time, which is a good indicator of how much you’ve got left to go. As things get hectic in the levels, your grandfather will make up new story elements to gift you some new weapons allowing you to take on the hordes of enemies in a quicker fashion. 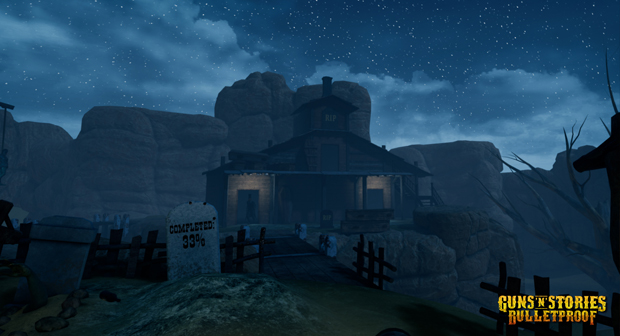 In the game you will always be looking around you as you can be approached by enemies from the sides and front, leaving you wide open at all times. I did like that the bullets were coming at you in slow motion so that you can have a shot at dodging them. I found it hard to focus on avoiding them and then aiming to shoot at enemies since it didn’t seem natural thanks to how the aiming works. At some points, you will have 20+ bullets covering the screen and flying towards you, and you’re going to have a bad day trying to dodge them while also trying to mow down enemies! I started playing on Normal and actually lowered the difficulty as I was having so many issues getting through these bullet storms.

The game comes off as a very pixelated release on PlayStation VR, which makes this one a blocky game to play in virtual reality. I’ve played me some crisp looking PS VR games, so I’m going to guess this is what the developer was aiming for. The cutscenes between the grandfather and his grandson had a very old-school feel to them. These reminded me of the Dragon Lair and Space Ace games from back in the day, which is certainly a good thing! Having a game with a Don Bluth feel to it is definitely appreciated. 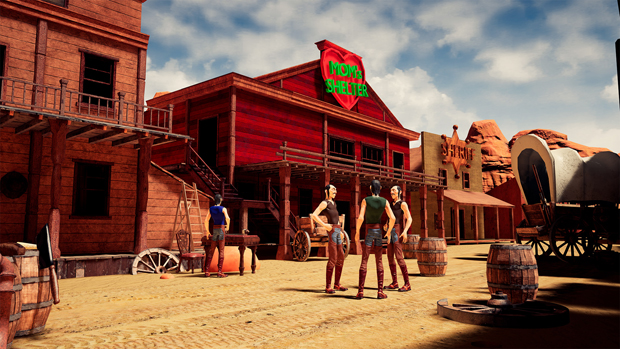 I have mixed feelings about the game. I really liked the cutscenes and the story and setup, especially as it features an unreliable narrator that mixes things up here and there. I found the aiming to be troublesome, and the number of enemies coming at you a bit overwhelming.

Disclaimer
This Guns’n’Stories: Bulletproof VR review is based on a PlayStation 4 copy provided by MIROWIN LLC.