A storm’s coming, and as the keeper of the lighthouse, you need to light it up, but something is off about today. Can you solve the puzzles and get to the top? Check our A Fisherman’s Tale review!

Bend and twist reality in A Fisherman’s Tale, the mind-bending VR puzzle adventure game in which being turned upside down and inside out is not merely a play on words.

Playing as Bob, a tiny fisherman puppet, you live alone in your tiny cabin, oblivious to the world outside. When your radio broadcasts a storm alert, you have to get to the top of the lighthouse and turn on the light! But as you try to leave your cabin with the help of some uncanny sidekicks, you realize what’s waiting outside is not at all what you expected…

Break more than a couple laws of physics in mind-bending VR puzzles!
Make it to the top of the lighthouse before The Big Storm, with the help of some uncanny sidekicks!
Use your hands to pick up, throw, combine, and use all kinds of things in glorious fully immersive virtual reality!
Toy around with your tiny little model lighthouse, inside a lighthouse, inside a… is that another lighthouse?
Uncover the truth at the core of an unusually tall Fisherman’s Tale, exclusively in VR.


I’m still pretty new to the PlayStation VR scene, and even though I have enjoyed a lot of the current PS VR offerings, one of my favorite genres has failed to be represented so far: the point and click adventure genre! There aren’t many games available for one of the best genres out there, but A Fisherman’s Tale has given me hope that we will get to see some other excellent point and click adventures down the line. 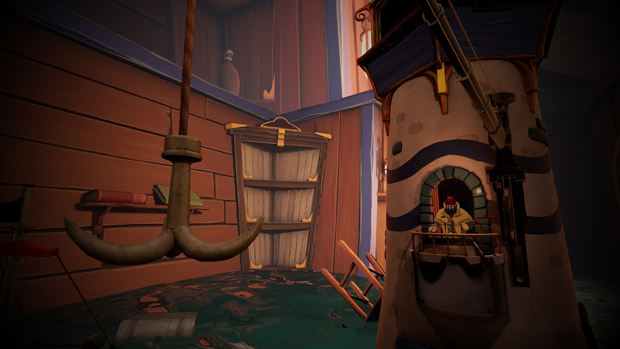 A Fisherman’s Tale puts you in the role of Bob, a wooden puppet, whose job is to run the lighthouse. You are alerted of a storm via your radio in your cabin, and you realize that you need to light your lighthouse. It’s not that simple though, as something weird has happened. Your lighthouse has changed. The model lighthouse, a replica of yours, which sits in the middle of the room… is different. When you take the roof off to look inside, you see a smaller version of you in the lighthouse removing the roof, and when you look up, you see a giant version of yourself that jas just removed the roof. That is just the beginning.! I don’t want to get to much detail into the story or the puzzles as I wouldn’t want to ruin it for you.

Let’s talk about what you need to play. The PlayStation Move controls are necessary, so if you want to experience this game, ensure you have a pair charged up and ready to go. Both move controllers will come up looking like wooden hands in the game. You grab using the trigger, and the Move button on the top will allow you to teleport to other areas of the room – when using it will show you an arc and you land where you’ve aimed. The X and O buttons are used to make small turns left or right, and you can use the face buttons to make your hand reach further out and to retract it to grab items. 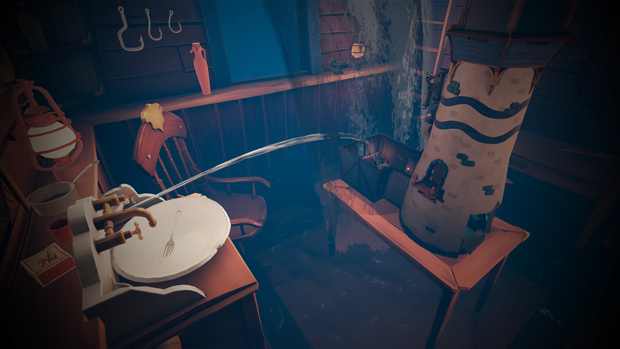 Like I said earlier this game has the feel of an old-school point and click adventure. You want to proceed further but there are obstacles in your way, so you need to find the right items to help you carry on. What sets this game apart is the scale of it though. One of the early puzzles has you looking for a life preserver for a tiny character in the game. There is one your wall, but it’s way too big to help this person but, as I had mentioned earlier though, you have a miniature version of your room inside the lighthouse replica, so you find the one on the wall in the replica and give it to him. As you continue to solve puzzles, the scale will become more and more important. You will use different sized items differently and need to find creative ways to make things bigger or smaller. It was really neat and made my mind reexamine the rooms when trying to solve puzzles. It was very well designed.

The art style was great, creating a wooden world for you to explore, but what really blew me away was looking up. Looking up and seeing a giant version of yourself, that mimicked your movements was really cool, same with the smaller one in the replica. As the game continued, it found ways to constantly change up the gameplay in cool, unique ways, subverting expectations about what was next in your journey. Being in VR really took it to another level, as you were experiencing this first hand, making it really seem like your journey.

I played through the game in one sitting, and it probably took me between 4-5 hours to do so. Your mileage may vary on how long it takes you to complete the game on how good you are at solving puzzles, as my skill in this type of game is typically above average due to my experience with the genre. While I would have loved a bit more explanation about the ending, it was a good conclusion to a solid story that will stick with me for a while. 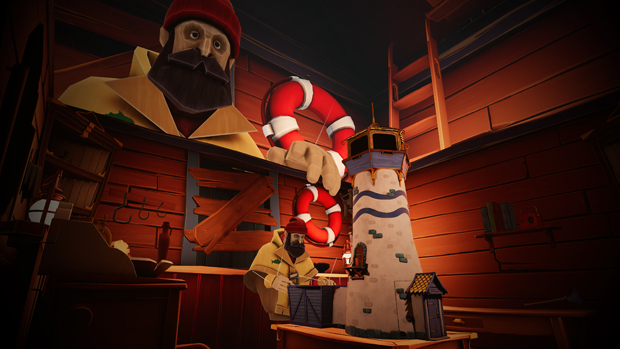 I loved A Fisherman’s Tale. I’m still relatively new to the PlayStation VR platform, but I found this to be a great example of what can be done with VR when a lot of hard work and care is put into a game. It has some really unique puzzles that have much more impact while wearing the headset, and the game tells a cool story. I was disappointed that it came to an end so quickly, but at least that means I can now look forward to what the team does next!

Disclaimer
This A Fisherman’s Tale review is based on a PlayStation 4 copy provided by Innerspace.

Wandersong Out Today For PlayStation 4