Stereo Aereo is a sci-fi rhythm game that brings 1980’s themed music into the mix with some space shooter like moves. Find out if it’s worth playing in our Stereo Aereo review!

Although not essential in rhythm-based games, this game has a simple yet interesting one. Your band, aptly named Stereo Aereo, is at a bar when suddenly they are requested for a show. With no hesitations, they take off on their spaceships (forgetting to pay the bill at the bar) in order to get to the show to perform! During the course of the game, you’ll get cutscenes detailing their adventures as they get there, which includes getting a drum machine in case they can’t free their drummer from prison!

As you begin the story mode, you’ll get to choose one of the three spaceships for one of the three members of the band. You’ll also be able to choose from 4 difficulties. The easiest of the difficulties will give you six hit points, with the possibility of regenerating life when you get combos while playing. Medium will preserve the regeneration, but grant you only four hit points. Hard reduces those to 3 and even reduces the regeneration on combos. The toughest of all, aptly named Insane, simply grants you one hit point, making for an incredibly challenging journey! 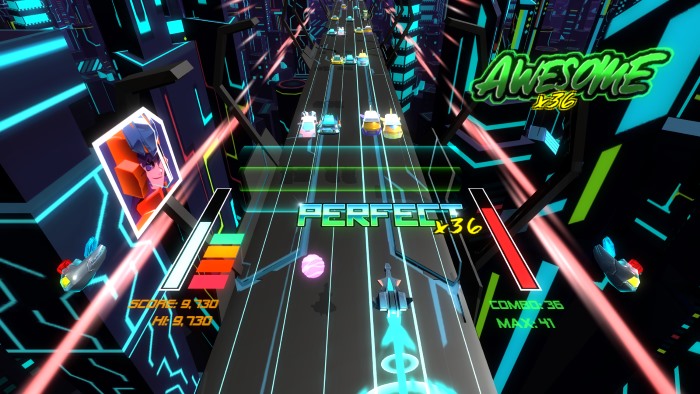 Speaking of your journey, here’s how things go through the ten stages the game has to offer. There are five lanes in which you can move from left to right. As your ship automatically advances, there’ll be cars, barriers or other kinds of objects in your way, which you’ll have to dodge left or right. In some occasions, there’ll also be purple objects in the lanes, that you can shoot with the cross button to destroy them. In both cases, the timing at which you dodge or shoot should be in the middle of the three horizontal lanes that are on screen for the best score.


Maybe you’re wondering where the rhythm part in all of this is? It’s rather simple, as all those dodges and shooting are all done to the beat of the song while you’re playing. Moreover, there are a couple of bosses in the game that are actually quite challenging, and you must battle against them while dodging what they shoot to the beat. You can also go back to levels you’ve previously beaten in the Arcade mode, which is just the same levels without the story cutscenes, to try and get better points. 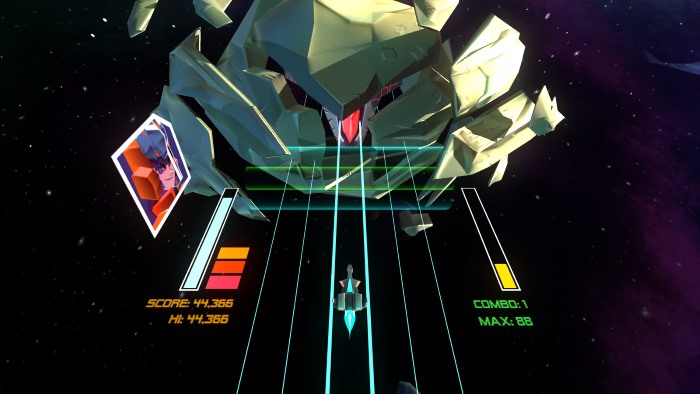 This takes me to the soundtrack, which is just incredible. Rocking with the 80’s theme of the game, it’s an incredibly nice blend of electronic, rock and new wave music that totally fits the looks of the game. The only downfall to this incredible soundtrack is that I haven’t been able to find a store online to purchase it! The futuristic look of the tracks and ships is nicely done with tons of neon objects all around the place and is great to look at while playing.

I’m a big fan of rhythm games, and I was in the mood for another one, as I had recently finished Invector, which I reviewed a while back. I started up on Easy, and I can say I’m glad I did, as the game quickly became a good challenge a few stages in the game! Part of the difficulty came from my own desire at a better score though. You see, there’s something called a “Crazy Dodge,” that you get if you dodge your obstacle at the very last moment, resulting in bonus points and also related to some trophies. A lot of times I could pull it off, but I also ended up hitting the obstacle pretty frequently, making my life go down. 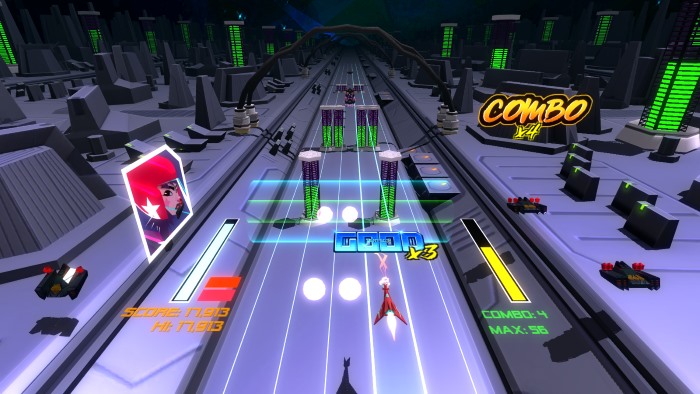 Another thing that made my life go down a couple of times was the technical issues. At least once per stage, I experienced some lag or slowdown that would make the screen freeze, only to unfreeze with the game jumping ahead and me clearly not being aware of what’s coming at me, which most of the times resulting in one or two hits before getting back on track. There are also a couple of times where the design of the level, or the obstacles coming your way, make it hard to see in which lane they’d end up, resulting in some unnecessary hits.


While this is an issue that can be ignored considering the budget price tag the game has, it comes in a bit annoying considering there’s a trophy for each of the ten stages for doing them without getting hit. I don’t mind trying again because I’m not good, but failing because of a glitch that’s happening in every stage, it does give a little frustration. Other than that though, the majority of the trophies should be easy to get. You’ll have to beat the game with three different ships, get 15x crazy dodges in all levels and 15x perfects in each of them. And then, there’s that single trophy that will be the dealbreaker for a lot of people aiming at the platinum: finish the story mode in insane difficulty. Considering the glitches and the fact that you can’t take a single hit, this will make the platinum quite difficult to obtain. 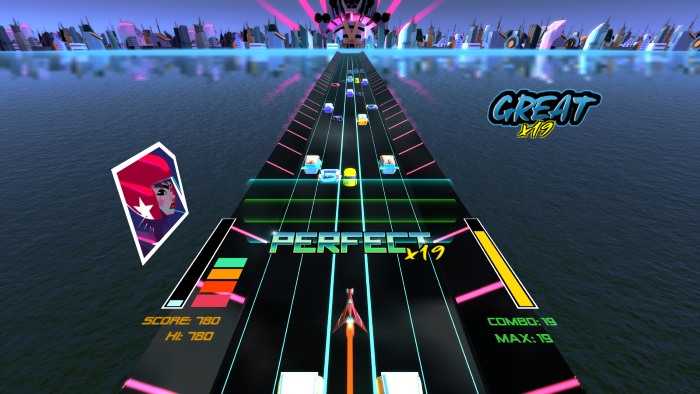 Final Thoughts
Although not perfect and relatively short, Stereo Aereo is a lot of fun for a rhythm game that can provide incredible replay value if you aim at the platinum. If only the team at Ludus Games could fix that annoying glitch, it would be quite an enjoyable ride, especially at only $4. If you’re into music games like this, there’s a good chance you’ll find some fun in there.

Disclaimer
This Stereo Aereo review is based on a PlayStation 4 copy provided by Ludus Games.